Gritty Gets a Makeover in Special QUEER EYE Episode - Nerdist

Gritty Gets a Makeover in Special QUEER EYE Episode

Since premiering on June 5th, the new season of Netflix’s Queer Eye has offered a beacon of positive vibes during a tumultuous time. Now, the Fab Five have come together to create a special mini-episode. It finds the boys giving a makeover (or should we say a make-better) and some life coaching to the Philadelphia Flyers NHL mascot, Gritty. He’s only been around since 2018, but it’s never too soon to give yourself a new look.

You can watch the full 8-minute mini-episode below.

How utterly wonderful. The official episode description states:
The famous mascot is known for being a little rough around the edges, and after spending time with the hosts of Queer Eye, he learns to embrace all his…  uniqueness and just be himself with his wild eyebrows and mischievous personality. With a special guest appearance by the Phillie Phanatic who understands the pressure of being in the spotlight better than anyone, Gritty is ready to tackle his fears and become the best version of himself.

Phillie Phanatic nominated the big fuzzy orange lug for the Queer Eye treatment. He kindly wrote to the series’ hosts Jonathan, Antoni, Karamo, Tan, and Bobby. He told them, “Being a mascot is tougher than most people think, and we all handle it differently, but it’s out of love for the people of Philadelphia. I don’t think Gritty needs to change a ton, but maybe you guys could convince him that he doesn’t need to eat a cheesesteak for every meal. Looking forward to seeing how you can clean up my pal, Gritty.” 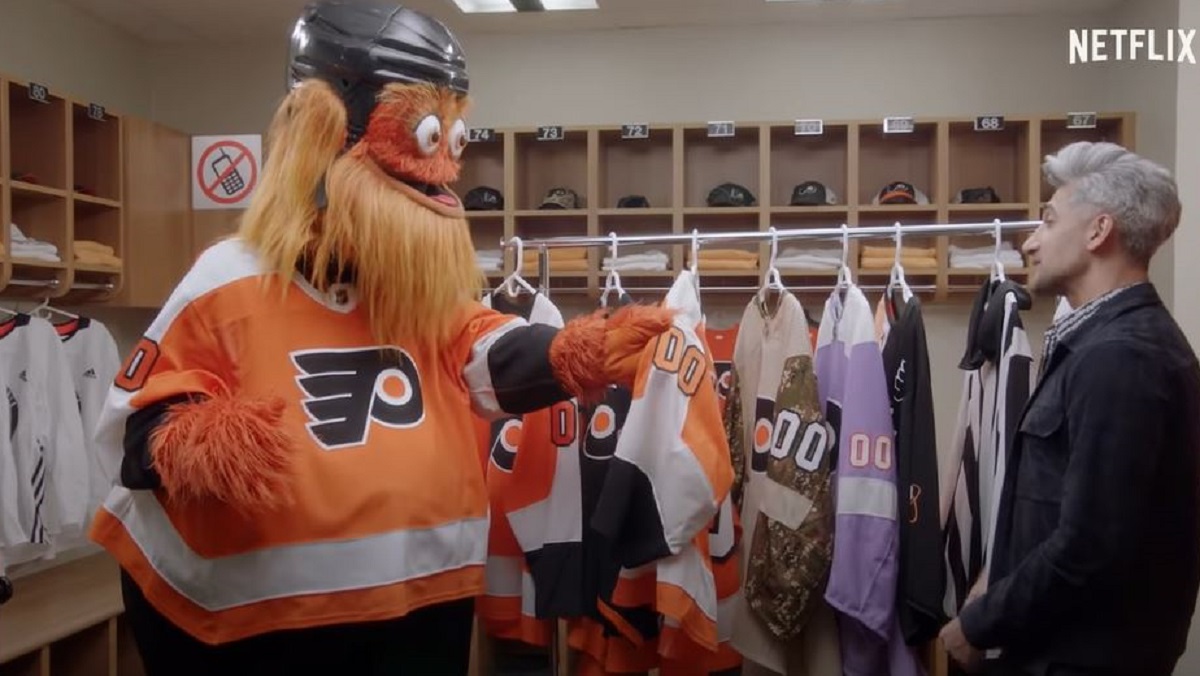 This season of Queer Eye is set in the city of Brotherly Love, so it’s no surprise that one of Philly’s newest icons makes an appearance. But we hope that Gritty, in turn, nominates Phillie Phanatic to receive a ‘make-better” himself. We’re not sure that shade of green Phillie’s been wearing since 1978 is really working for him anymore. Time for a change, buddy.