The Star Trek franchise’s motto is “seeking out new life and new civilizations.” But across nearly 800 episodes over five decades, there’s not as much “meeting alien species for the first time” as one might think. Lots of Star Trek deals with previously known aliens, mapping star clusters, and diplomatic missions. Now and then, however, the humans of the Starfleet do make first contact with a new alien race. Notably, the first of these instances took place on April 5, 2063—dubbed First Contact Day.

In honor of the date, we present ten fantastic episodes across the various series in the franchise. All which showcase humanity first making contact with new alien lifeforms. Sometimes it goes great. And other times? Not so much. But it is almost always memorable. (Oh, and neither the TNG episode “First Contact” nor the feature film Star Trek: First Contact made our list. They’re both great, but it a little too on the nose to be included for “First Contact Day.”) 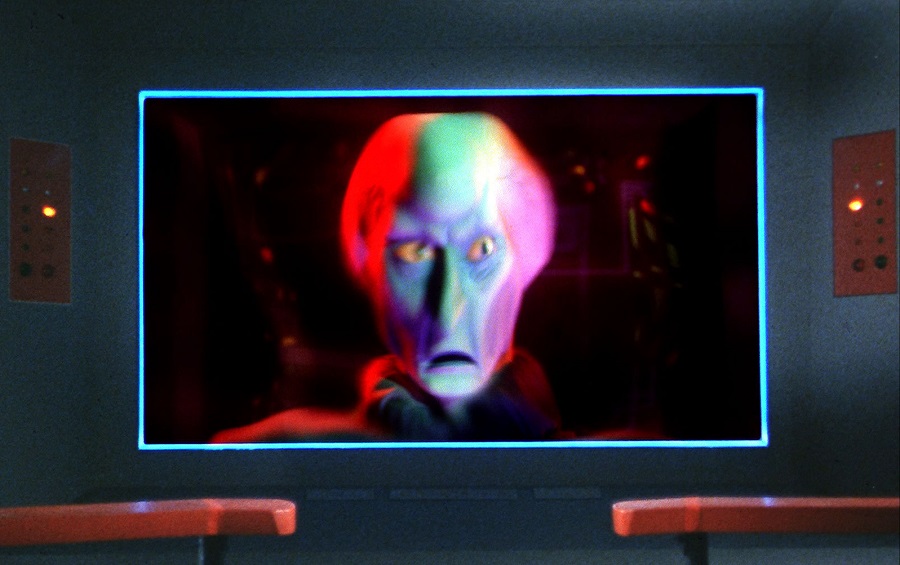 This was the first episode of Star Trek ever shot, although not the first one aired. The Enterprise encounters a powerful alien species who promise to destroy the Starfleet ship for trespassing. This episode shows how Captain Kirk uses brains and ingenuity to get out of a pickle with the The First Federation. Instead of firing phasers, he must outthink them in an interstellar game of poker. It also has Clint Howard as the alien Balok, which alone makes this episode awesome. In many ways, the mission statement of the franchise is firmly exhibited in this episode. 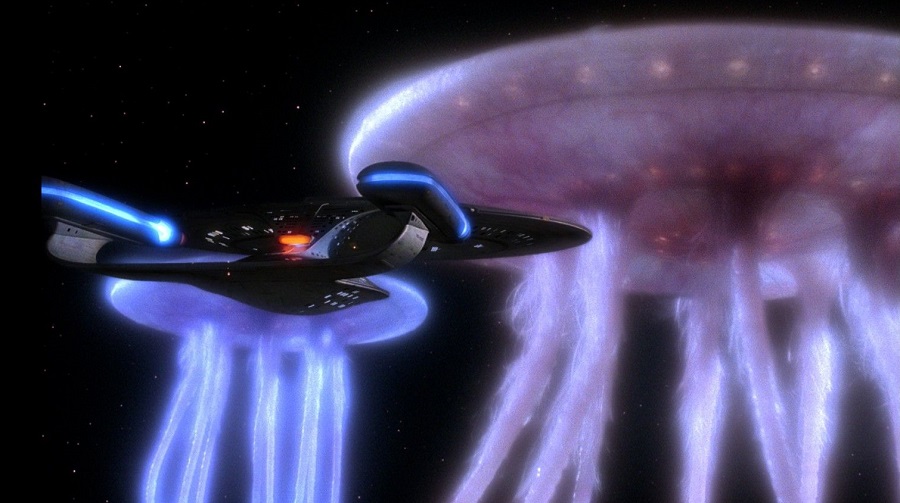 The pilot to TNG is not a particularly great episode of television overall. It’s hammy, the music cues are cheesy, and the acting is over the top. Nevertheless, it is very pure Trek in that the Federation makes first contact with not one but two fascinating alien species. One is a giant jellyfish like creature that creates matter from thought; the creature is kept in captivity by a greedy humanoid race. But more importantly, Picard and crew first encounter Q, an omnipotent being from the Q Continuum. The latter would become a beloved Trek character, so we say this first encounter was worth the rest of the episode being very “meh.” 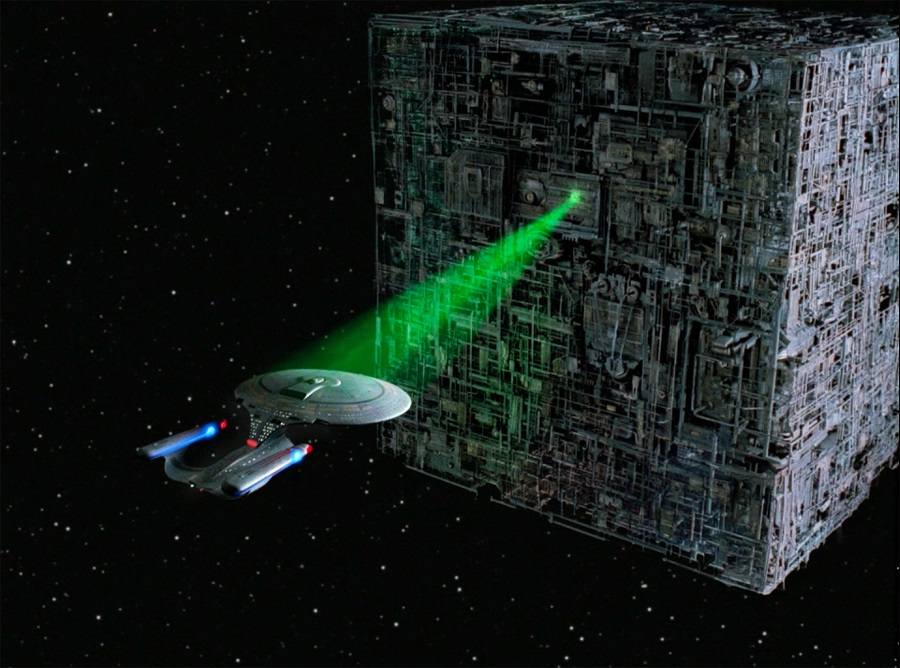 Speaking of Q, the all-powerful prankster returns in season two of TNG for the episode “Q Who.” Deeming Picard and his crew as too arrogant after years of successful first contact missions, Q sends the Enterprise-D to the other side of the galaxy. Years away from home, they encounter the Borg Collective, a cybernetic alien race far more technologically advanced than humanity. This marks the introduction of the Federation’s most deadly enemy, one so strong it takes a deus ex machina to save them. 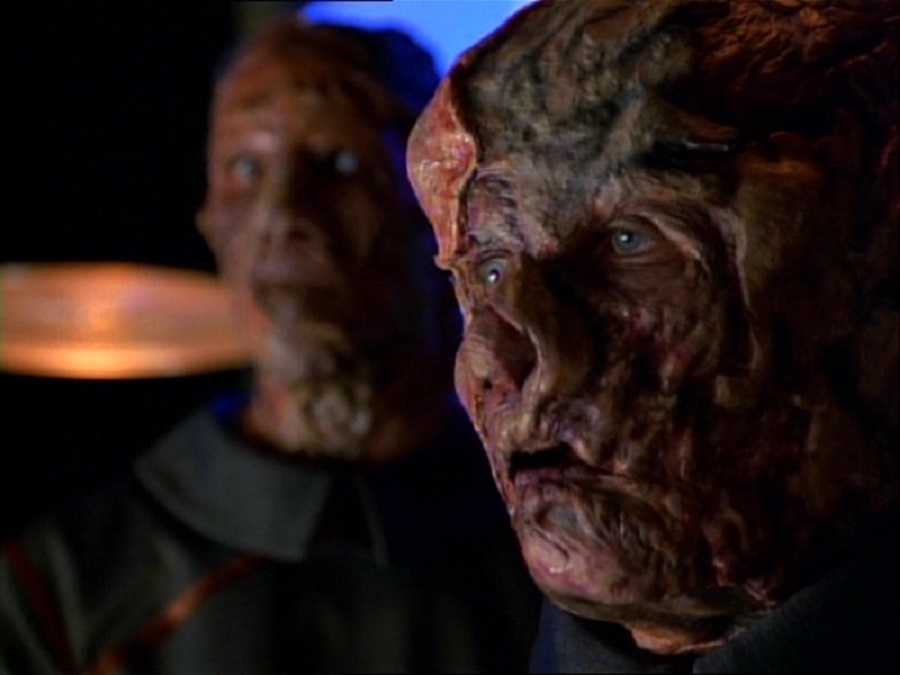 Star Trek: Voyager’s crew of Starfleet humans are lost in a part of the galaxy no human has ever visited. This show had more first contacts than most. But one of our favorites happened pretty early on, involving a species that was more icky than scary. The Vidians all suffered from a lifelong affliction called the Phage, which slowly ate their skin and internal organs and damaged their DNA. Their solution? Harvest organs from other species they encountered. Like humans. (We told you it was gross.) This was by far the most interesting new race encountered by Captain Janeway’s crew in the early seasons. 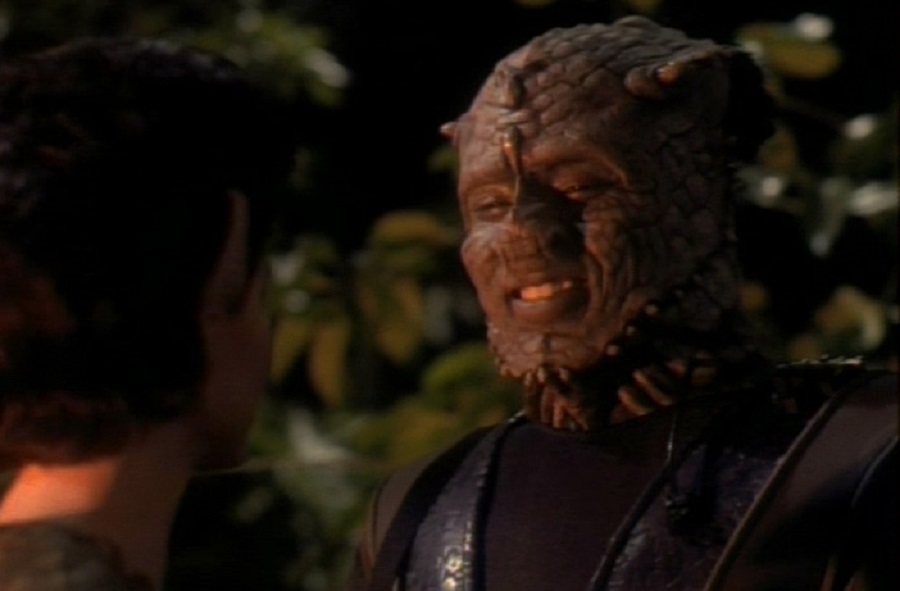 Deep Space Nine was not as famous for exploring the galaxy as its sister Trek shows were. Mainly because the main setting for the series was a stationary outpost in space. But they were right next to a wormhole to the other side of the galaxy, the distant Gamma Quadrant. And on one such journey there, Captain Sisko finally makes first contact with an organization the Federation had only heard whispers about—the Dominion.

Sisko’s first relations with the Dominion come via a reptilian alien species called the Jem’Hadar. This warrior species is born and bred in a lab for one singular purpose: to do battle. Commander Sisko discovers that they are force-fed a mysterious drug by another alien race in the Dominion, the Vorta. This is another “two for the price of one” first contact, and it would have long-lasting ramifications for Deep Space Nine as a series. 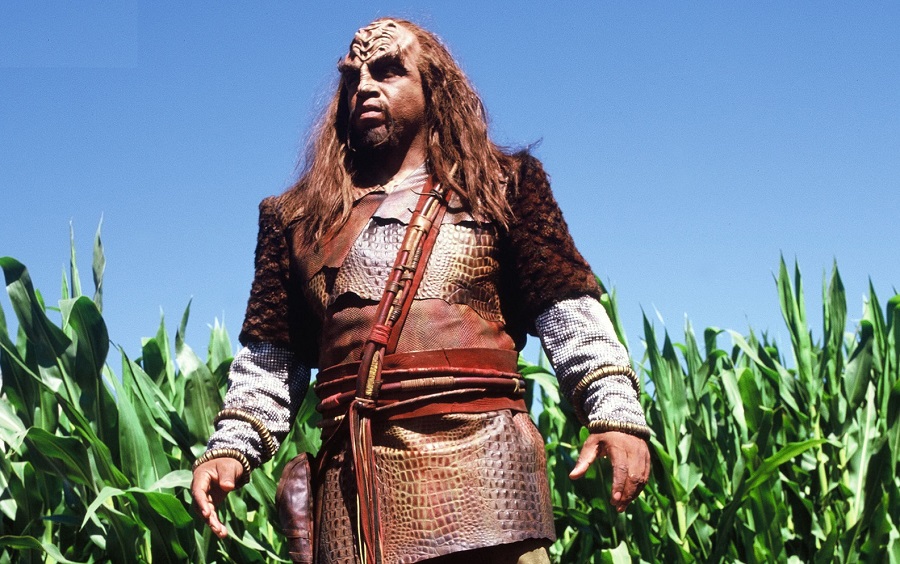 Ever since the original series, the Klingons have been the Federation’s most famous adversaries. By the time we first meet them, Starfleet has already known about Klingons for decades. Later series would describe first contact with the Klingons as “disastrous,” but with few details as to why it was so. Well, the pilot episode of prequel series Enterprise answers that mystery.

When a Klingon crashes his ship in Broken Bow, Oklahoma in the early 22nd century, a local accidentally shoots him. Not the best first “hello” between two species. Captain Archer of the newly christened starship Enterprise NX-01 decides to take the wounded Klingon to his homeworld as a sign of good faith. And let’s just say, the first interspecies encounter with the Vulcans in the film First Contact goes a lot smoother. 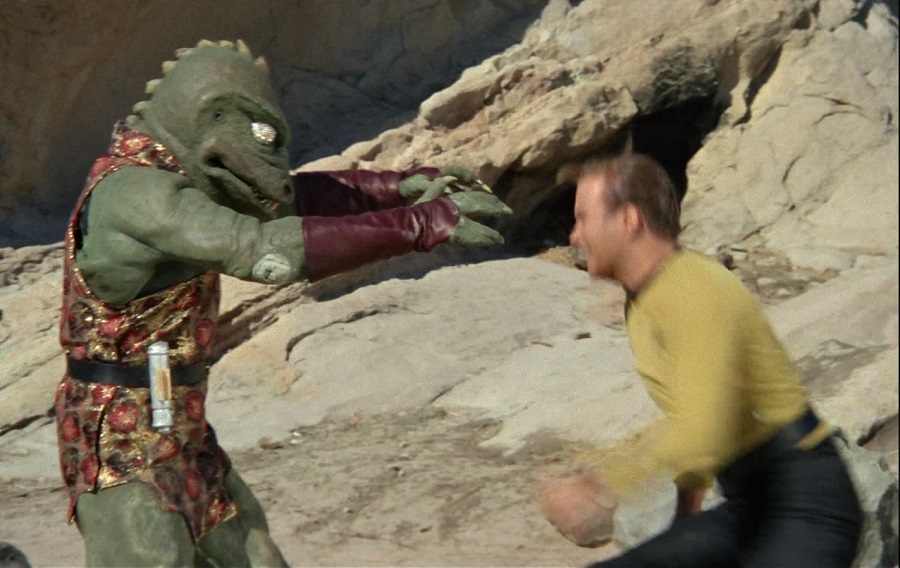 It’s one of the most famous fight scenes in all of Star Trek; William Shatner’s Captain Kirk wrestles with the reptilian Gorn on a distant planet. (One that is really the California desert locale Vasquez Rocks). Maybe the Gorn captain is not the most convincing affect by modern standards, but it’s an iconic scene nevertheless.

Although the Gorn are by all accounts a violent species, James T. Kirk refuses to fight the lizard-like alien to the death. Thus proving to a superior alien race monitoring the whole thing called the Metrons (whom the Federation also encounters for the first time) that humans have evolved above bloodlust. It’s a very “Gene Roddenberry ethos” episode of Star Trek, and another twofer. 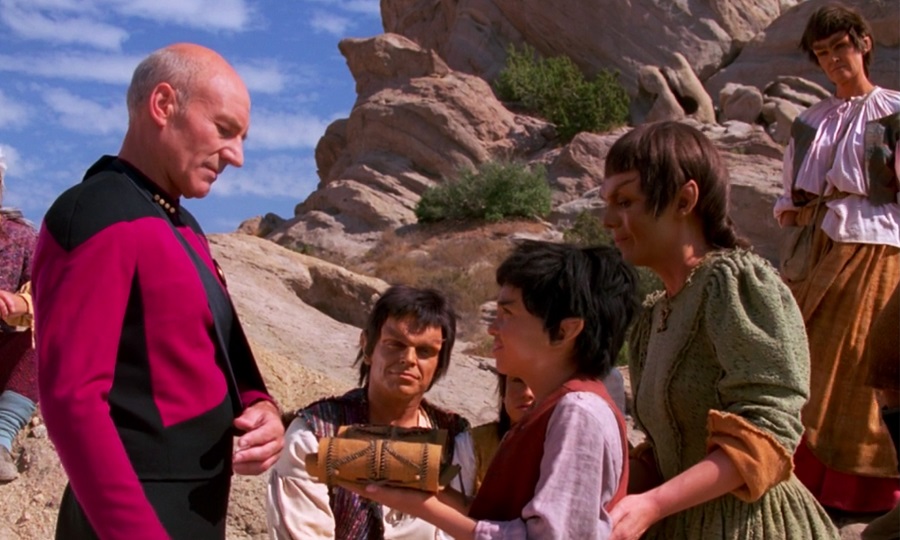 The Federation is always careful about preserving the Prime Directive in every series. For you Trek newbies, this law prohibits non-warp-speed-capable species from knowing about alien life before their time. But sometimes, accidents happen, and a pre-industrial civilization learns the truth. We see this when the crew of the Enterprise encounters the primitive Mentakans. How Picard deals with a pre-warp civilization finding out they’re not alone in the universe, and the lengths he’ll go to not alter the fabric of their society, are what Star Trek is all about in the end. 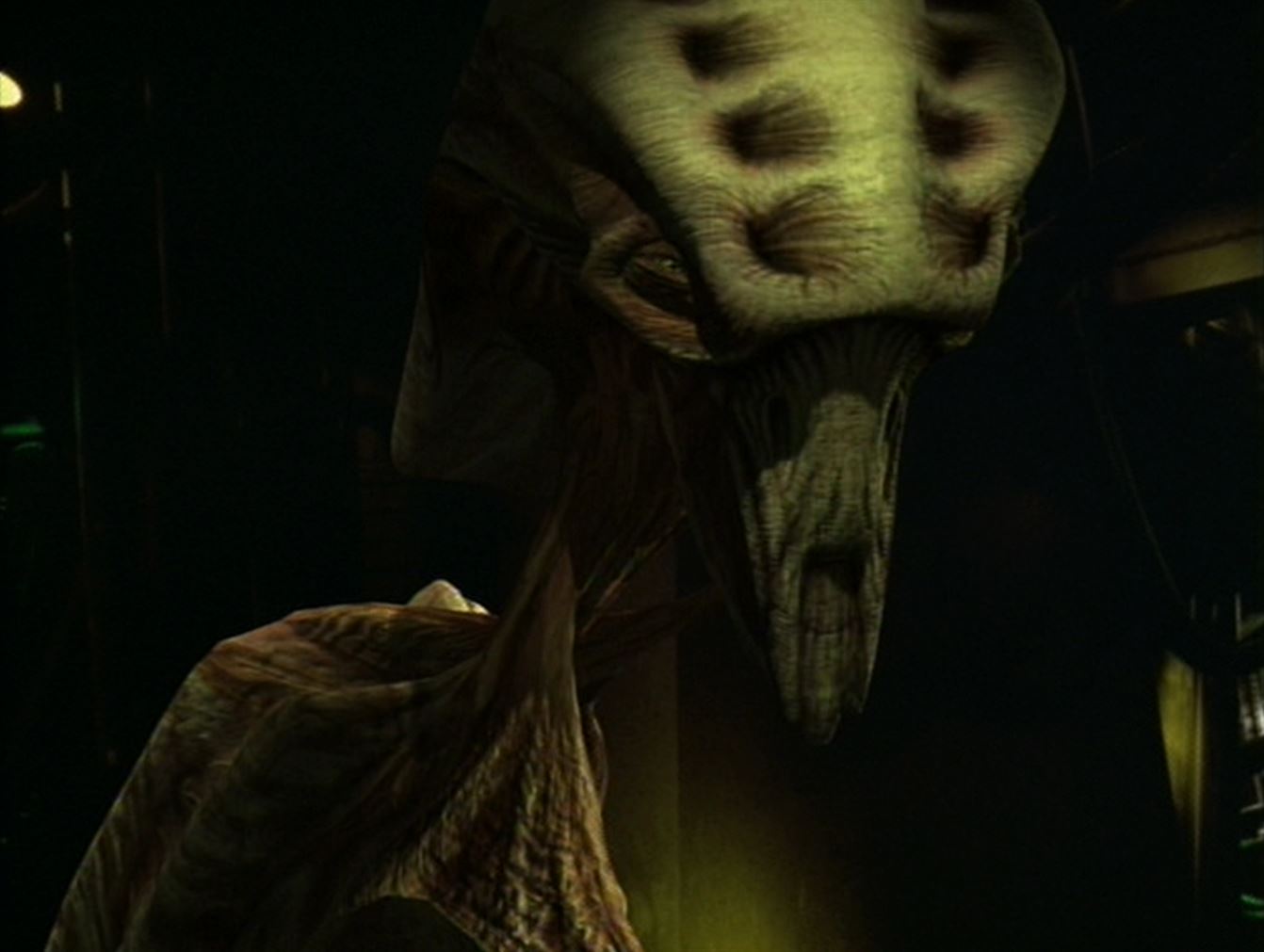 By the time we get to season three of Voyager, the Borg have been around for almost a decade. After several TNG episodes and Star Trek: First Contact, it seems that they were definitely the biggest threat to the Federation ever. To up the ante, the show ropes in a race that actually has the Borg scared. In the third season closer of Voyager, the crew encounters a space graveyard of slaughtered Borg. The culprit is a non-humanoid race with only a Borg designation to go by: Species 8472.

The Borg travels to the native dimension of these beings—a place called fluidic space, only accessible through quantum singularities. This non-humanoid species can’t be assimilated and decides to retaliate by entering into our dimension, killing everyone in it. Not just the Borg, but humanity too. Species 8472 is one of a handful of non-humanoid intelligent species we encounter in a Star Trek series up to this point. And a welcome change of pace from yet another human-looking race with bumpy foreheads. 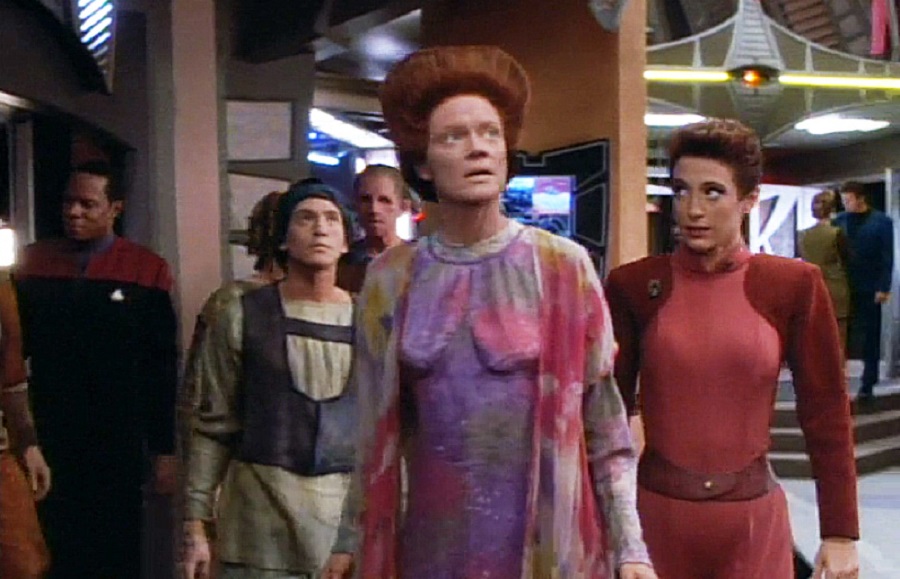 Most first contacts on Star Trek end with cooperation and promises of friendship, or phasers set to kill. But this incident ends with two species simply disappointed in each other. A race of alien refugees called the Skrreeans come through DS9‘s wormhole, revealing that their impoverished nomadic tribe is looking for a holy land called Kantanna. They believe it’s the nearby planet Bajor, which operates Deep Space Nine.

But Bajor has just gotten out of a long, brutal alien occupation, and doesn’t feel like they have the room for another desperate people. The Skrreeans believe they could have helped each other, while Bajor insists that “we already have our own problems.” Not a lot of fighting in this one, or dangerous aliens. Just two races disagreeing. No bad guys here; just bad circumstances.