Resistance Is Futile: A History of STAR TREK's The Borg - Nerdist

Resistance Is Futile: A History of STAR TREK’s The Borg

Although we still have to wait several months for Star Trek: Picard to drop its first episode, the recently released SDCC trailer gave us some tantalizing teases about what to expect. And it looks like we can expect the Federation’s biggest menace, the Borg, to make their return. Not only are two of the most famous Borg characters part of the series (Seven of Nine and Hugh), but we also see a Borg cube. But just who and what are the Borg, and why are they such an ever present threat to the life of one Jean-Luc Picard?

After hints of a technologically superior race were dropped in The Next Generation’s first season finale “The Neutral Zone,” the Borg made their first actual appearance in the second season TNG episode “Q Who.” After season one failed to make any new alien races worthy antagonists for the Enterprise, the producers of TNG created this race of cybernetic beings that functioned as a sort of hive mind. Instead of having the traditional desire to conquer or destroy, the Borg sought to assimilate all biological life into their collective.

The character of Guinan (Whoopi Goldberg) revealed that decades before, the Borg destroyed her homeworld. This left what remained of her people as refugees. We later see this event referenced in the film Star Trek: Generations. It was in  that first episode however that we heard the voice of the collective utter its famous motto for the first time ever: “Resistance is futile.”

As a way of testing Picard’s ability to deal with unknowns, the omnipotent Q sent the Enterprise millions of light years away to an area of space unexplored by the Federation. There, the Borg had a presence, and almost instantly tried to assimilate the Enterprise. Far more powerful and technologically advanced, Picard’s crew was no match for the Borg’s superior technology. It was only through the last minute intervention of Q that they survived at all, and they still lost 18 crew members. But the Borg were aware of the crew’s presence, and eventually tracked them to Federation space.

Over a year later in the TNG season 3 finale “The Best of Both Worlds,” the Borg made their presence known in Federation space when they assimilated an entire human colony. In the cliffhanger finale episode, the Borg assimilated Jean-Luc Picard and made him into a sort of representative of their conquest of the Federation. Unlike most Borg, he had a name: Locutus. The majority of Starfleet mobilized to defend themselves from the Borg. In total, the Borg wiped out 39 ships in the battle of Wolf 359. Among the destroyed vessels was the ship of future Deep Space Nine commander Benjamin Sisko.

Luckily for the Alpha Quadrant, Commander Data was able to retrieve Picard from the clutches of the Borg and un-assimilate him in “The Best of Both Worlds Part II.” Using the knowledge of their inner workings, the Enterprise was able to destroy the Borg cube. It saved the Federation, but that was all just the beginning. In many ways, the worst was yet to come.

In the season 5 episode of TNG titled “I, Borg,” the Enterprise encountered a downed Borg scout vessel. The ship had only one survivor, a teenage boy named “Third of Five.” His name was derived from the fact that there were five drones in his unit all together. In an act of mercy, Doctor Crusher saved the injured Borg. Under the Enterprise crew’s care, the drone began to exhibit a personality, and started to become an individual. He was given a name by the crew,  who called him “Hugh.” And he befriended Lt. Geordi La Forge. 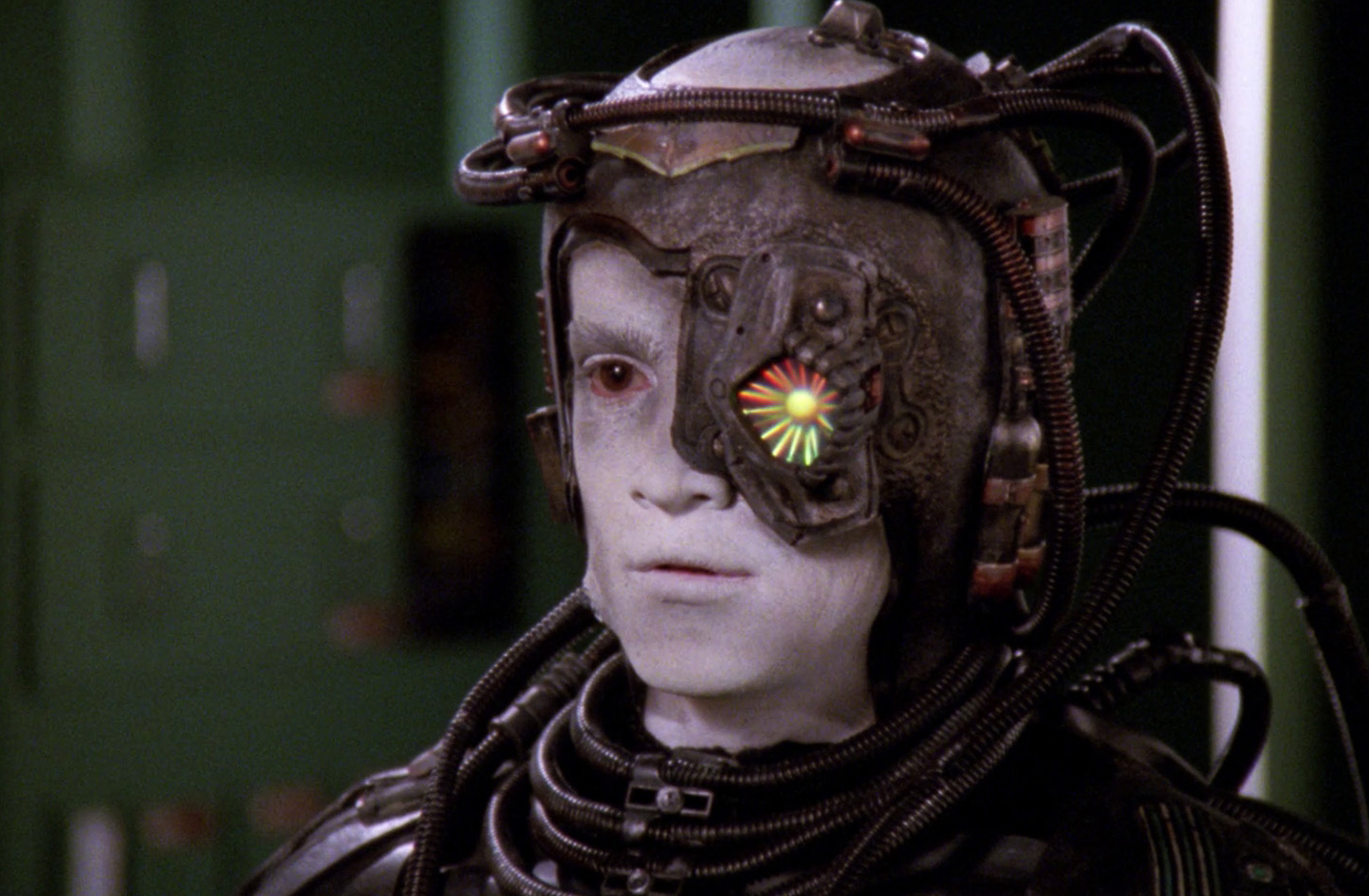 Picard initially dismissed the notion of an individualized Borg, harboring intense resentment for how they kidnapped and used him years before. He intended to plant a disabling virus within Hugh, hoping that when they returned him to the collective, the virus would contaminate the entire collective and destroy them. Essentially, they were committing genocide. Despite their destructive capability, Picard couldn’t bring himself to perform such an act. But the hopes were that when they returned Hugh to the collective, his newly found sense of individuality spread. It worked. But the Enterprise crew would come to wish it hadn’t.

Several Borg ended up becoming “infected” with Hugh’s newfound sense of individuality, and became a sort of splinter race of Borg. Being too individualistic for the collective, but still too Borg for the universe at large, these newly emotional beings became a lost tribe in space. They fell under the sway of Data’s identical twin android brother Lore, who served as a sort of cult leader for them. Although they were ultimately released from Lore’s thrall in the two part episode “Descent,” not much has been heard from this particular group of Borg since.

The next time the Borg appeared, it was as the collective once more. In the film Star Trek: First Contact, they sought to assimilate the Earth, but they failed due to the extensive knowledge of their inner workings held by Captain Picard, who used that knowledge to destroy their cube. In a last ditch effort, the surviving Borg drones went back in time to Earth’s 21st Century past. There, they hoped to stop the first contact between humanity and the Vulcans, an event that would lead to the formation of the Federation. 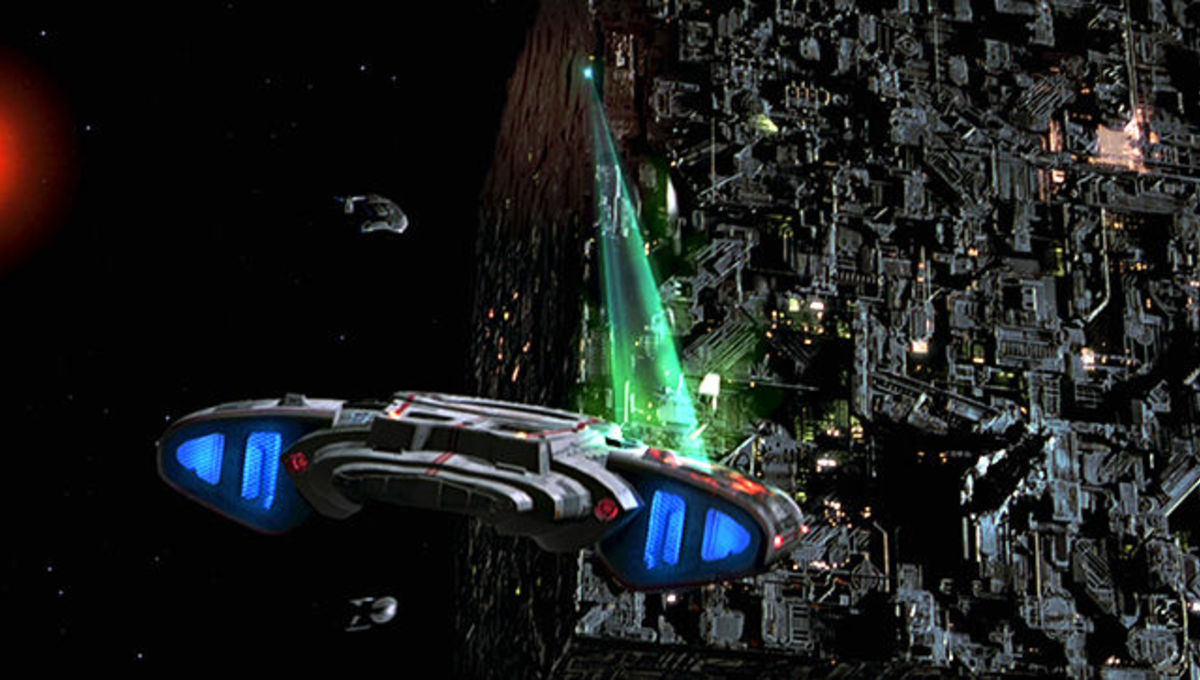 But the Enterprise crew also went back in time and managed to stop them, allowing history to unfold as it should. It was during the events of this move that we learned that although they were a hive mind, much like insects, there was a queen. The Borg Queen (Alice Krige) retained her personality, and was revealed as the main guiding force behind the collective’s actions. Although she was destroyed in the movie’s climactic battle, we would learn later of other Borg Queens. This revelation changed the fundamental dynamic of what we knew about the Borg.

The next time the Borg made their presence known was in Star Trek: Voyager. The events of that series found the titular ship stranded in the Delta Quadrant, some 70 years away from home. As this was the home turf of the Borg, it was only a matter of time before they ran into their deadly enemy. This occurred in the episode “Scorpion,” at the end of season three. But the circumstances were different than the Enterprise’s previous encounters with the Borg.

The once mighty race had met their match when trying to assimilate the non humanoid Species 8472, who lived in fluidic space. The Borg needed an alliance with the Federation to defeat them, and as a result a once-human Borg drone named Seven of Nine came to serve aboard Voyager.

A Borg for most of her life, Seven had to relearn how to be a human being detached from the Collective. During the remainder of Voyager’s run, Captain Janeway, Seven of Nine and the rest of the crew encountered the Borg collective many more times, far more times than the TNG crew ever did. They discovered something called Unimatrix Zero, a sort of collective unconscious that assimilated drones could visit mentally. It is ultimately destroyed, which leads to an uprising within the collective once again.

After taking on several Borg children freed from the collective, Voyager has many more run ins with a different Borg queen. During this time, we learn that the Borg use transwarp technology to travel nearly anywhere in the galaxy, giving them an advantage over almost every other species. But in Voyager’s final episode titled “Endgame,” Captain Janeway manages to destroy one of their most important transwarp hubs. On top of that, Janeway introduces a pathogen into the Borg collective that disrupts their mental communication with one another, effectively crippling them.

What became of the Borg collective after the events of Voyager is unknown. The Star Trek: Picard trailer shows us a Borg cube, so we know that even without the transwarp hubs, they found their way back into Federation space at some point over the past twenty years. And a much more human Seven of Nine shows that her remaining Borg tendencies seem to be removed. One thing is certain: the Borg are nearly impossible to defeat completely, and they will be a thorn in the side of the Federation for years to come.