In Jurassic Park, there’s a famous scene where entrepreneur John Hammond says “When they opened Disneyland in 1956, nothing worked.” To which Jeff Goldblum‘s Dr. Ian Malcolm said “Yeah, but John, if Pirates of the Caribbean breaks down, the pirates don’t eat the tourists.”

Well, we don’t envision a future where the robot pirates are going to eat any park guests. But, according to a piece in The New York Times, Disney is exploring ways in which robots might get up and start walking around the park. This is the wild future Walt Disney Imagineering is working on right now.

Disney wants the robots in its parks to come alive. One goal: Setting them free from the confines of the rides and letting them wander walkways to turn the parks into, as one executive put it, "inhabited places." https://t.co/UGlTjq0Cjw

Imagineering has already shown off their prototype Baby Groot in a series of videos. But that walking animatronic is just the tip of the iceberg for what’s coming. According to the article, Disney’s newest robotics initiative, codenamed “Project Kiwi,” is about “extreme Marvel and Star Wars characters— huge ones like the Incredible Hulk, tiny ones like Baby Yoda.” They mention their amazing advancements in recent years, like the swinging Spider-Man “stuntronic” seen in Avengers Campus at Disneyland.

The most fascinating tidbit from The New York Times article comes from Imagineering’s Leslie Evans. They see these advances in robotics as an opportunity to make the walkways between rides more exciting for the park guests. “We want to create incredible experiences outside of a show box. To me, that’s going to be next level. These aren’t just parks. They are inhabited places.” So yes, one day, salty pirates like Davy Jones might just get up and walk around after all.

So what does this mean for the future of Disney theme parks? Imagineering is confident that these advances won’t mean that robots will replace cast members who portray Disney characters. Why get a robot to play Elsa or Cruella when you can get a real live human to do it? But it does mean characters that humans can’t believably play might go the Groot route. Imagine a Baby Yoda, or even a grown-up Yoda, walking around Galaxy’s Edge? Or for that matter, any non-human Star Wars character? It’s honestly what fans have been waiting for ever since Galaxy’s Edge opened. 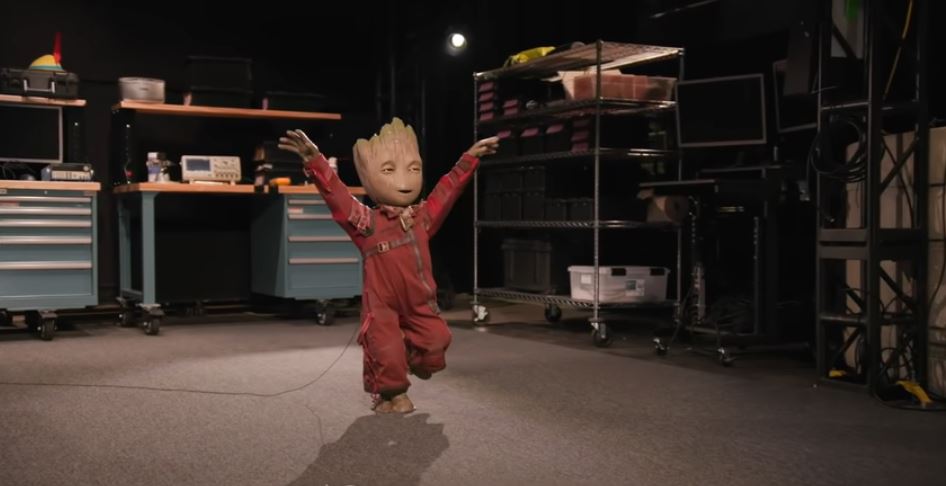 And some things will be combinations of real live humans with animatronics. Imagineering previewed exoskeletons made for oversized characters. We spotted a wampa from The Empire Strikes Back, or at least its feet. And a large green hand that looked like the Hulk’s. Could we see Bruce Banner and maybe even Thanos roaming around Avengers Campus in the not-too-distant future? That seems to be the plan.

And this is the future. We don’t think iconic attractions like Pirates of the Caribbean and the Haunted Mansion will ever go away. But it’s clear that, at some point, the old ’60s animatronics will be replaced with more believable and mobile ones. No more swashbucklers and happy haunts just standing in place. In 10 years’ time, those rides might have entirely new robots inside. Ones that will blow away even the most jaded 21st-century kid.