An Ode to PIRATES OF THE CARIBBEAN'S Davy Jones - Nerdist

An Ode to PIRATES OF THE CARIBBEAN’S Davy Jones

Seemingly more than ever before, two types of villains have become all the rage. Think of Prince Zuko. Walter White. Kylo Ren. Arthur Fleck. Almost the entire Marvel Cinematic Universe rogues gallery: Loki, Helmut Zemo, Erik “Killmonger” Stevens, and especially Thanos. For better or worse, audiences are clearly gravitating towards villains who are either redeemable or sympathetic, whose twisted worldviews might contain a kernel of truth… And then there’s Davy Jones. 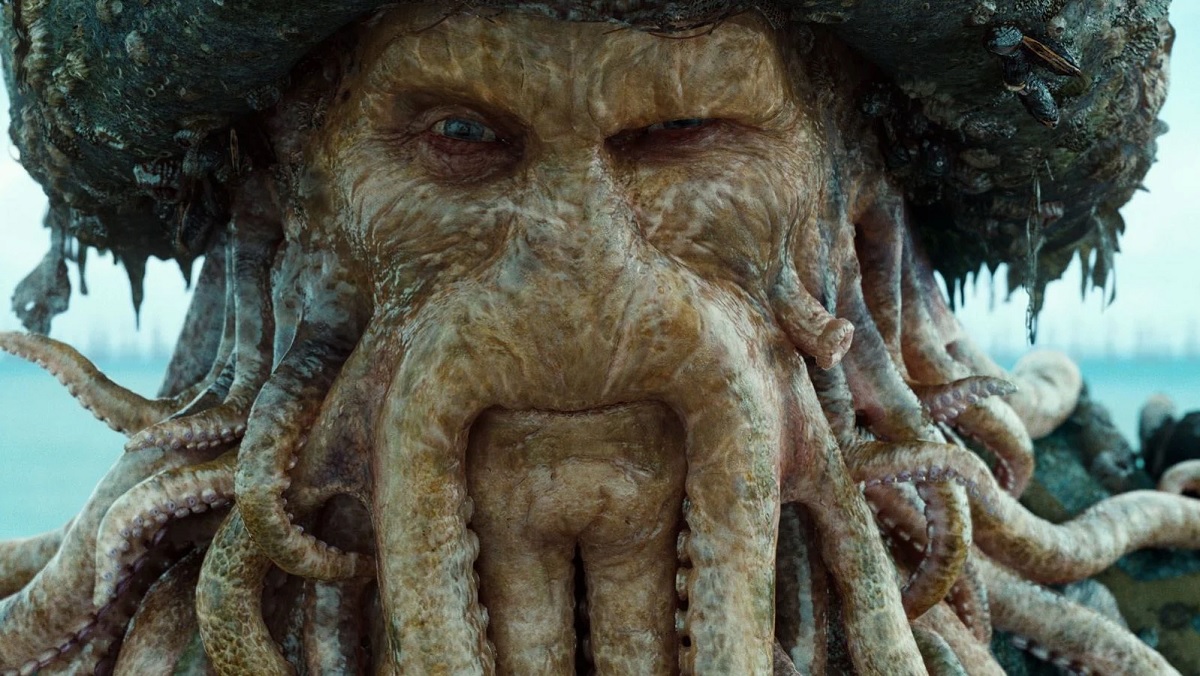 Much like the trilogy itself, perhaps a reappraisal of the fearsome Pirates of the Caribbean antagonist is in order. Masterfully brought to life by Bill Nighy and ILM’s sublime VFX work, Jones poses a singularly formidable challenge to our heroes. And what’s more, he seems to enjoy every second of it. Like a sailor spotting land on the distant horizon, watching his utterly unapologetic depravity in the year 2020 feels—amusingly enough—like a welcome respite from the recent norm.

To be sure, no viewer could possibly mistake his arc for potential redemption. And despite a tragic backstory, we never once consider whether his actions might actually be right. So what drives him? What allows him to maintain a compelling, watchable presence while practically reveling in his pillaging and plunder? 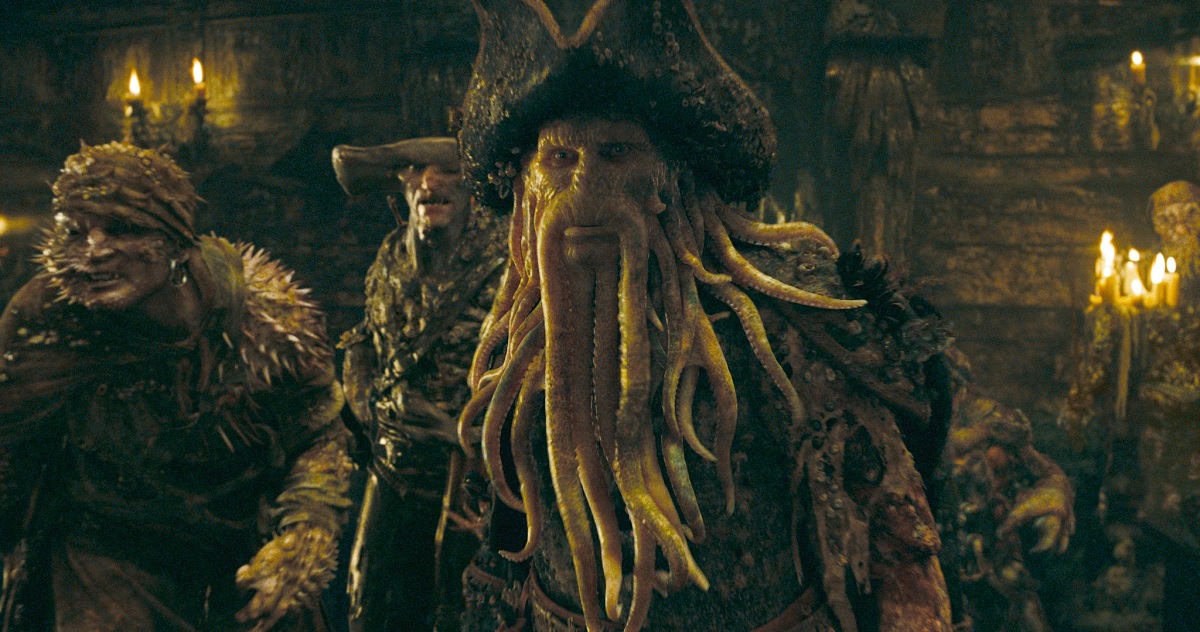 It comes down to one simple factor: Davy Jones is humanized, not justified.

This balancing act begins right from his introduction, arriving precisely one hour (to the second!) into Dead Man’s Chest after considerable build-up and anticipation. “Do you fear death?”, Jones searchingly questions one terrified sailor before gleefully executing another to show his resolve. Only minutes later, our expectations are promptly confounded by his apparent fixation with (and bitter resentment of) love. Consider his heart-shaped locket/music box and the tempestuous feelings its mournful lullaby provokes – fierce anger one moment, tearful remorse the next. As revealed in the next film, eccentric soothsayer Tia Dalma carries a matching locket; the missing half of Jones’ whole. But until then, these initial clues sufficiently challenge our assumptions. They suggest a deeper pathos beneath his tentacles and surely horrific odor. 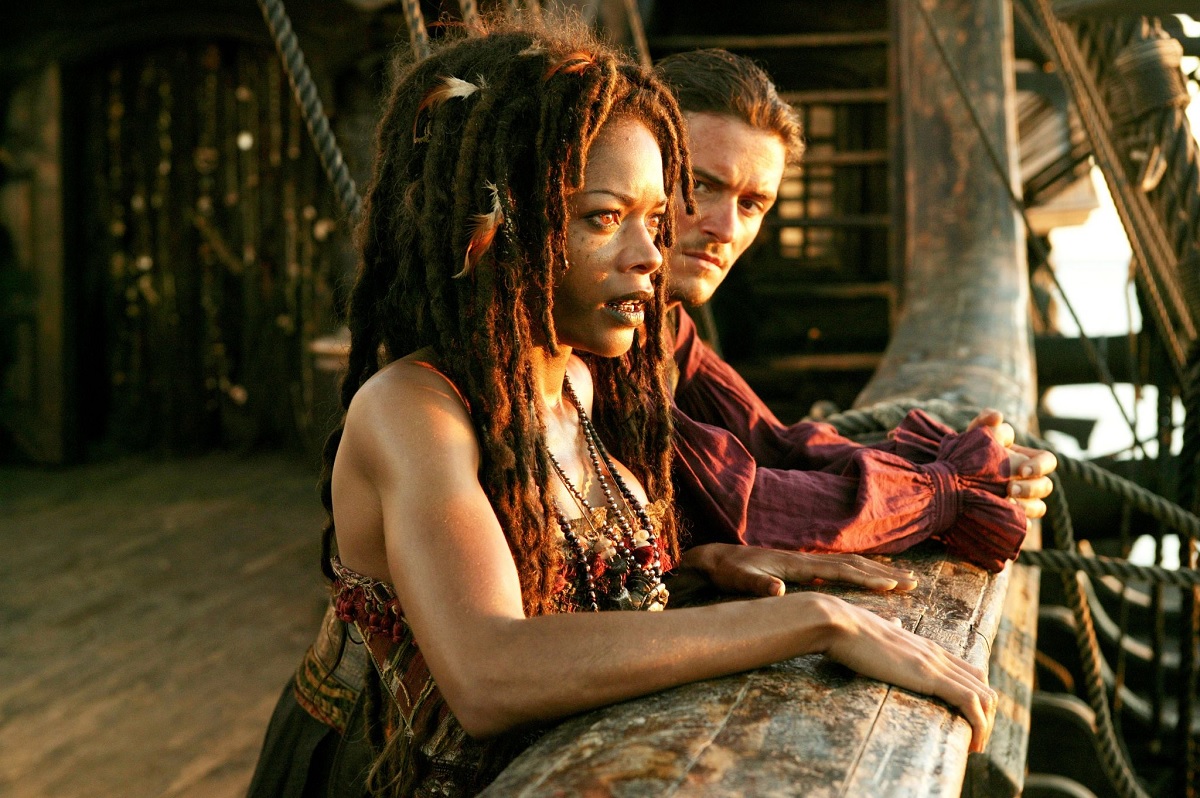 Such economic storytelling immediately lays bare the fascinating contradiction inherent within this ruthless foe. Davy Jones derives purpose from his cruelest and most merciless moments, but as love is his motivation, this creature must have a heart. And he did. That is, until he literally cut it out and hid it inside the eponymous chest; all to dull the intense emotional pain of lost love. So began a devastating feedback loop, denouncing the very idea of love to compensate for his own spurned feelings. In the micro, Jones’ heartbreak serves as a purposeful foil to Will Turner and Elizabeth Swann’s sweeping romance. More broadly, this toxic response to rejection rings all too true in our real world.

Not only does this particular character flaw make Davy Jones unique among blockbuster villains, but it also sets him apart from other Pirates ne’er-do-wells.

Respectively, Captain Hector Barbossa and Lord Cutler Beckett serve as the primary antagonists of Curse of the Black Pearl and At World’s End. Though the scope and scale of their ambitions are worlds apart, both are ruled predominantly by greed – materially with the former, the latter ideologically. Of course, this in and of itself doesn’t make redemption impossible (for every Gollum, after all, there’s an Ebenezer Scrooge). Tellingly, however, Barbossa only ever rises to the level of antihero. Meanwhile, Beckett is a one-man representation of the greatest evils in the Pirates of the Caribbean universe: colonialism, cutthroat capitalism, and the death of myth.

Davy Jones and his far more vividly-drawn motivation exists on the other end of the spectrum, embodying the corrupted dark side of another Pirates theme: the power of love.

What truly makes our favorite squid-man distinct is that despite ample opportunity to leave his villainous exploits behind him, he actively chooses to reject a reformed path. Even his monstrous appearance is self-inflicted, powerfully demonstrated in a poignant meeting with Tia Dalma on the eve of battle. At last, the man behind the monster is fully (if briefly) unveiled. Both jilted lovers reaffirm their bittersweet connection to one another here… but sadly, it appears, never at the expense of seeking vengeance on their enemies. 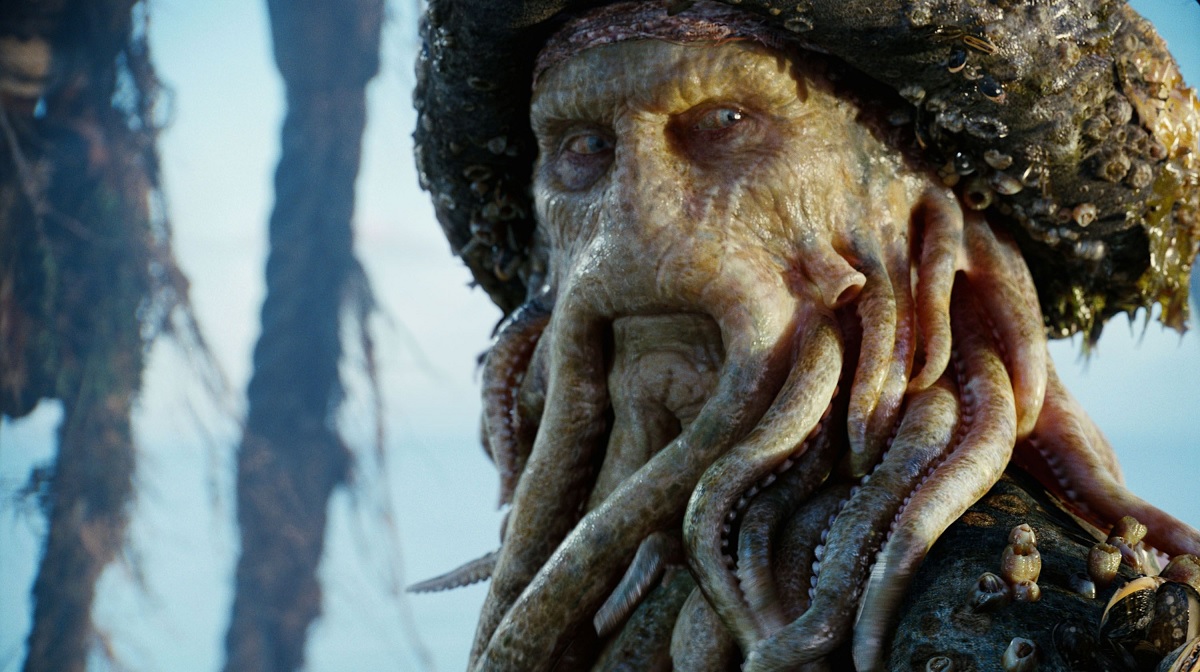 In At World’s End, the juxtaposition between our heroes and our villain has never been more clear. On one hand, Will and Elizabeth’s journey ultimately proves to be one of breaking endless cycles. Will frees his father Bootstrap from a lifetime of service on the Flying Dutchman by taking its captain’s place and Elizabeth boldly pioneers her own position in the world. On the other, Davy Jones only reinforces cycles of violence and pain. In as epic a divorce as you’ll ever see—one that makes Marriage Story look like a petty, childish spat—Tia Dalma conjures a maelstrom which provides the setting for the climactic fight of the series. Naturally, this is where Will and Elizabeth hold their impromptu, long-awaited wedding. Fittingly, it’s also here that Jones finally meets his end.

A foil to the last, Davy Jones is an emphatic argument that the best villains are the ones with a heart. In stark contrast to redeemable fan-favorites, his stubborn commitment to malevolence—no matter the absurd lengths it takes him—puts him in almost outright defiance of most popular antagonists since. All of this adds up to a memorably one-of-a-kind icon in an equally as enduring trilogy.

Here be Davy Jones – a lovelorn villain who loves being villainous.

Can WANDAVISION Redeem the MCU Romance?