The World of CYBERPUNK 2077 is an Interconnected Nightmare - Nerdist

These days, almost everything is connected to the internet. We walk around with computers in our pockets, talk to our speakers, and remotely access the cameras in our fridges and doorbells. Cyberpunk 2077, CD Projekt Red’s forthcoming dystopian shooter-RPG, takes this concept even further and shows what an always-on, hyper-connected future really looks like. During an hourlong hands-off E3 demo that showcased a previously unseen area of the game, that meant hacking into everyday objects — and even people.

Based on a tabletop role-playing game from the late 1980s, Cyberpunk 2077 is set in Night City, a megacity of the future where body modification is all the rage. The game’s protagonist, V, is completely customizable, from physical features to gender to attributes and attitude. Every choice you make affects how others interact with you, including your wardrobe and history. For example, if you choose a “street kid” background (as opposed to “nomad” or “corporate”), you might have more luck talking to gangsters, which comes in handy in the seedy underworld of Night City.

You can see a lot of the staples of the sci-fi subgenre in Cyberpunk 2077; it’s a sort of neon-noir grittiness that blends vibrant color and grime to show how things went wrong. This was especially apparent in Pacifica, a district designed as luxury tourist resort. Billboards show Pacifica’s original vision, but as it was never finished, it’s now a slum. It’s a very “expectation versus reality” moment.

Locals have turned what would have been a high-end hotel into a flea market of sorts, where V can pick up new clothes and mods. After a short shopping trip, V meets up with a man named Placide to discuss a new mission. Because this demo’s V was part of the Netrunner class, there was a big focus on hacking and tech, and Placide won’t help V unless he can hack into the protagonist’s body to keep an eye on the mission.

Placide wasn’t the only voice in V’s head during the demo. Johnny Silverhand, notoriously played by Keanu Reeves, pops up from time to time like a handsome cyberghost. Silverhand is based on a character from the original game, and the extent of his role in CDPR’s imagining isn’t entirely clear, but he does comment on V’s actions from time to time. 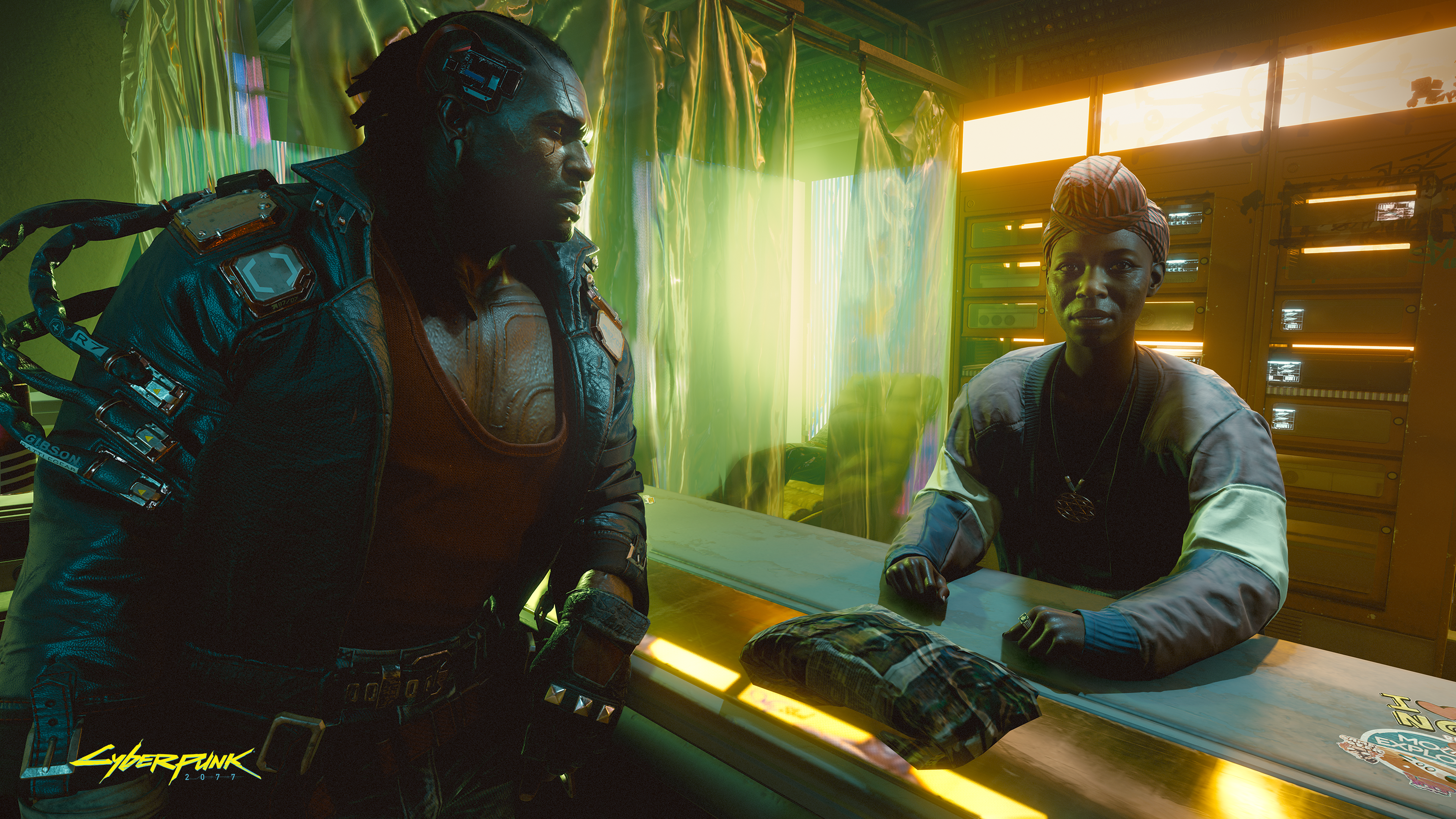 According to CD Projekt Red, there are multiple ways to approach any given situation. You can go in guns blazing or take a more measured approach, the latter of which was a better idea when infiltrating the base of the muscle-obsessed Animals gang. These baddies inject themselves with a special liquid to gain physical strength, and they are indeed intimidating. Using stealthy moves, V was able to get past many of them without raising the alarm.

It’s possible to get through the entire game without killing a single person. This demo, however, did not do that. V can use environmental takedowns to destroy his enemies, as demonstrated when he stuffed one Animal in a garbage chute. And remember when I mentioned that everything can be hacked? That includes the weight-lifting machines, which led to a particularly gruesome death for one guy just trying to get his gains in.

While all this is going on, the facility itself is being hacked by another Netrunner (the Cyberpunk 2077 term for “hacker”), who’s using digital billboards to flash V messages like “Go back” and “Leave now.” It turns out that this ‘runner is from Netwatch, a government cybersecurity group. Through dialogue options, V can decide whether to trust the other Netrunner or follow Placide’s orders to terminate him; the demo player chose the second option, which led to an immediate betrayal. V and every connected Netwatch agent are incapacitated as a virus takes them out. It’s only thanks to Johnny Silverhand that V isn’t shut down for good.

There’s no way to verify this now, but based on what I saw of Cyberpunk 2077, it looks like each playthrough could vary wildly thanks to the sheer amount of player choice. I couldn’t help but wonder how V would experience Pacifica with a different affiliation or background. It feels like CD Projekt Red’s next epic has been in development for millennia, but there’s not long to wait now; Cyberpunk 2077 will launch on April 16, 2020.