Consistent conversations about systemic racism, oppression, and bias against Black people are leading to a flood of content to highlight and support Black films and TV shows. Major streaming services like Netflix, Amazon Prime, and HBO, along with endless lists of Black movies, shows, and documentaries (among other mediums) highlighting the reality of our experiences are all over the place—for now. Some of them are cringe-worthy suggestions, like The Help and Green Book, which prioritize pacifying White guilt, lean into White savior territory, examine Blackness through a White gaze, or sanitize the truth about privilege and oppressive standards in America.

Others are powerful, moving narratives that give people a window into the complexities of Black life. As a Black woman, it is disheartening to see that most of the suggested content centers on our pain. Authentic Black joy that isn’t seeped in stereotypes or associated with proximity to Whiteness is a vital part of our experiences. To engage with or only promote narratives about Black despair is to not see us complete human beings and, in the case of Hollywood, to continue the vicious cycle of profiting off of our pain.

Cultivating joy and humor is a part of our self-care, our culture, and our resistance—a revolutionary act in a world that is inherently anti-Black. Joy interweaves in the midst of our pain, rage, fear, and hope. It stands on its own in moments where we come together to sing, dance, celebrate, relax, and disconnect from a constant fight for rights that should be inherent. Black joy is a slice of heaven in a world that gives us hell.

These Black films and TV shows bring our joy to the forefront in stories filled with humor, life lessons, good times, and friendship.

This 1978 musical reimagines the Wizard of Oz with an all-star Black cast. Watching shy schoolteacher Dorothy (Diana Ross) explore a magical land with new friends, including Scarecrow (Michael Jackson) is pure joy. The original songs are funky and fun and the energy is jubilant while managing to touch on social issues that are relevant to Black history and culture. 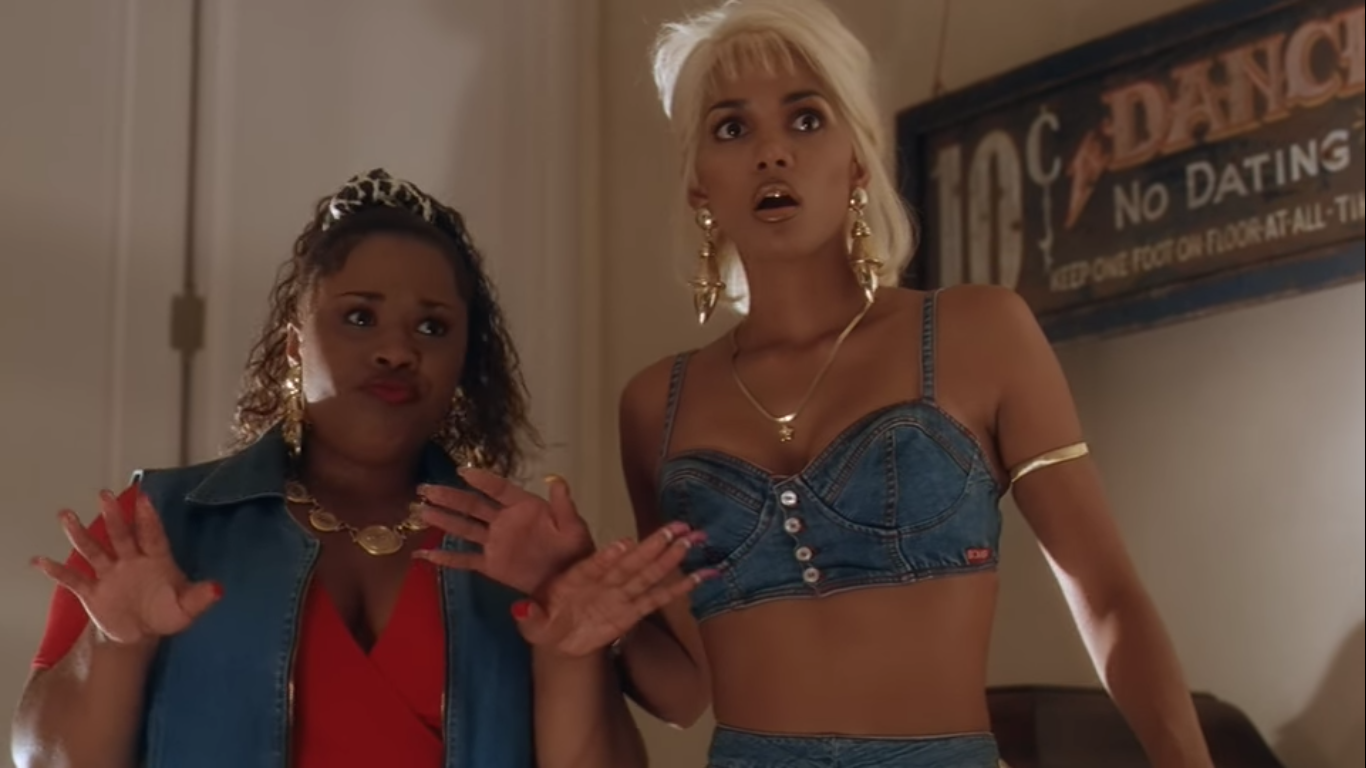 B.A.P.S. is fun “fish out of water” comedy about Georgia waitresses and best friends Nisi (Halle Berry) and Mickey (Natalie Desselle), who dream of opening a hair salon and restaurant. They travel to Los Angeles for a music video and end up caring for a millionaire in Beverly Hills. Nisi and Mickey are vibrant, funny, caring, and extremely talented.

Predictably, the movie was slammed by White critics who called the leads “garish homegirls.” However, this film shows that there’s more than meets the eye. Nisi and Mickey get to have the “rags to riches” arc that’s usually reserved for their White counterparts. The ladies have fun, build unexpected bonds, set firm boundaries with their lovers, and have a lasting impact on those around them before getting the life of their dreams.

There are plenty of movies about a group of White friends getting together for outlandish adventures (example: The Hangover). But, it’s not as common to see four Black girlfriends coming together to party, explore, and celebrate for an unforgettably wild vacation.

The Flossy Posse—Sasha (Queen Latifah), Ryan (Regina Hall), Dina (Tiffany Haddish), and Lisa (Jada Pinkett Smith)—turn New Orleans upside down as they drink, club, and fight their way through the city. Some unresolved issues and drama ensue but the ultimate message is about dynamic power of friendship and love between Black women.

Beyoncé’s 2018 Coachella performance was not only groundbreaking as she was the first Black woman to headline; it also celebrated Black college life and culture. Beyoncé gave nods to Black fraternities, sororities, and bands through alternate versions of her songs. She gave us Nefertiti aesthetics, step shows, Black power messages, and Black feminist knowledge with a sample of Chimamanda Ngozi Adichie’s TED talk. Homecoming dives deeper into how she crafted this masterpiece of a set.

There are quite a few Black “struggle love” movies that include an inordinate amount of pain, infidelity, and drama. The Photograph isn’t one of them. It’s a brilliant love story about Michael (Lakeith Stanfield), a journalist who falls in love with Mae (Issa Rae), a museum curator. The film tells two love stories at once and is a dreamy and passionate exploration of the joy and elation of falling in love. 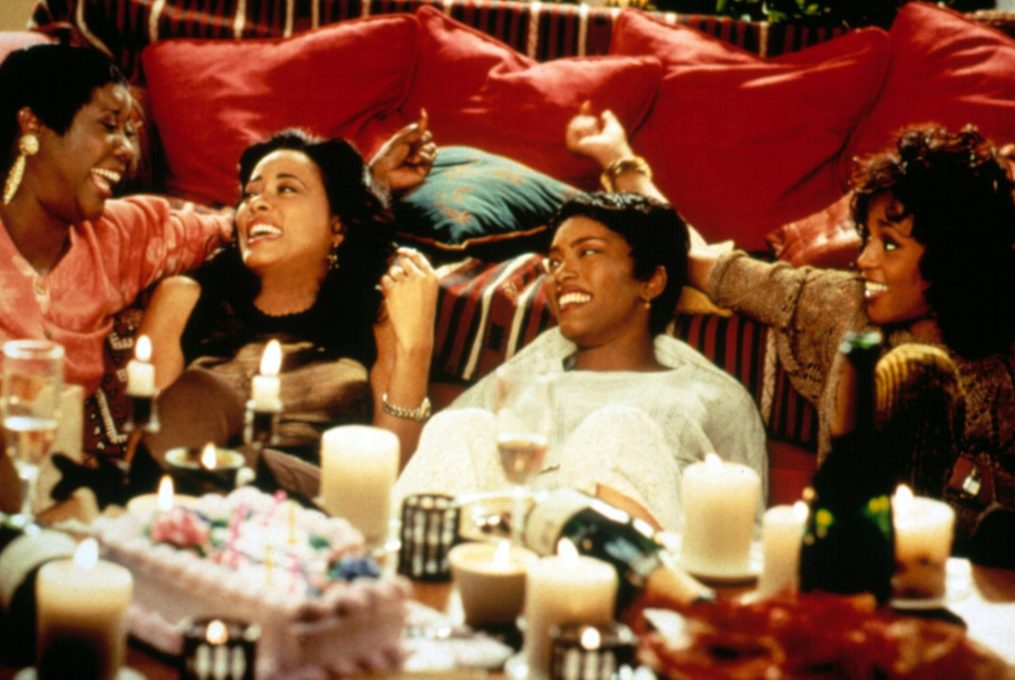 Black friendship is a healing balm. This classic film, which follows four Black women’s tight-knit friendship through personal and professional ups and downs, will always reign supreme. Savannah (Whitney Houston), Bernie (Angela Bassett), Robin (Lela Rochon), and Glo’s (Loretta Devine) a quest for healthy love, which, along with the film’s music and all the little nuggets of joy they experience together, make for Black joy personified.

A lot of people love Friends, but Living Single is the originator. The show follows Khadijah (Queen Latifah), Synclaire (Kim Coles), Max (Erika Alexander), and Regina’s (Kim Fields) friendship as they live in close proximity to each other.

Like most ’90s Black sitcoms, Living Single features a lot of laughter, love, famous appearances, a great theme song, and a few iconic moments of this quartet loving life and having fun. There are some deeper issues explored throughout the series but there’s a lot of happiness and humor, too.

There are a lot of Black coming-of-age stories, but The Wood is special. It taps into what it’s like to grow up in a disenfranchised California city, but the story primarily centers on a few guys’ nostalgic look back at childhood. Roland (Trent Cameron), Slim (Duane Finley), and Mike (Sean Nelson) get into a few misadventures: Mike standing up to a gang member, going to a school dance, teenage obsession with sex, and falling in love. There are a lot of sweet, funny moments in this comedy celebrating the Black joy of boyhood.

The world can never make enough movies or shows about Black girls. Our experiences, beliefs, and personalities are as wide ranging as any of our female counterparts from other races. Chewing Gum follows Tracey, a 24-year-old who grew up in a strict religious environment. She wants to explore the world, have sex, and enjoy adult life. Sadly, there are only two seasons of this show, but they are both great. 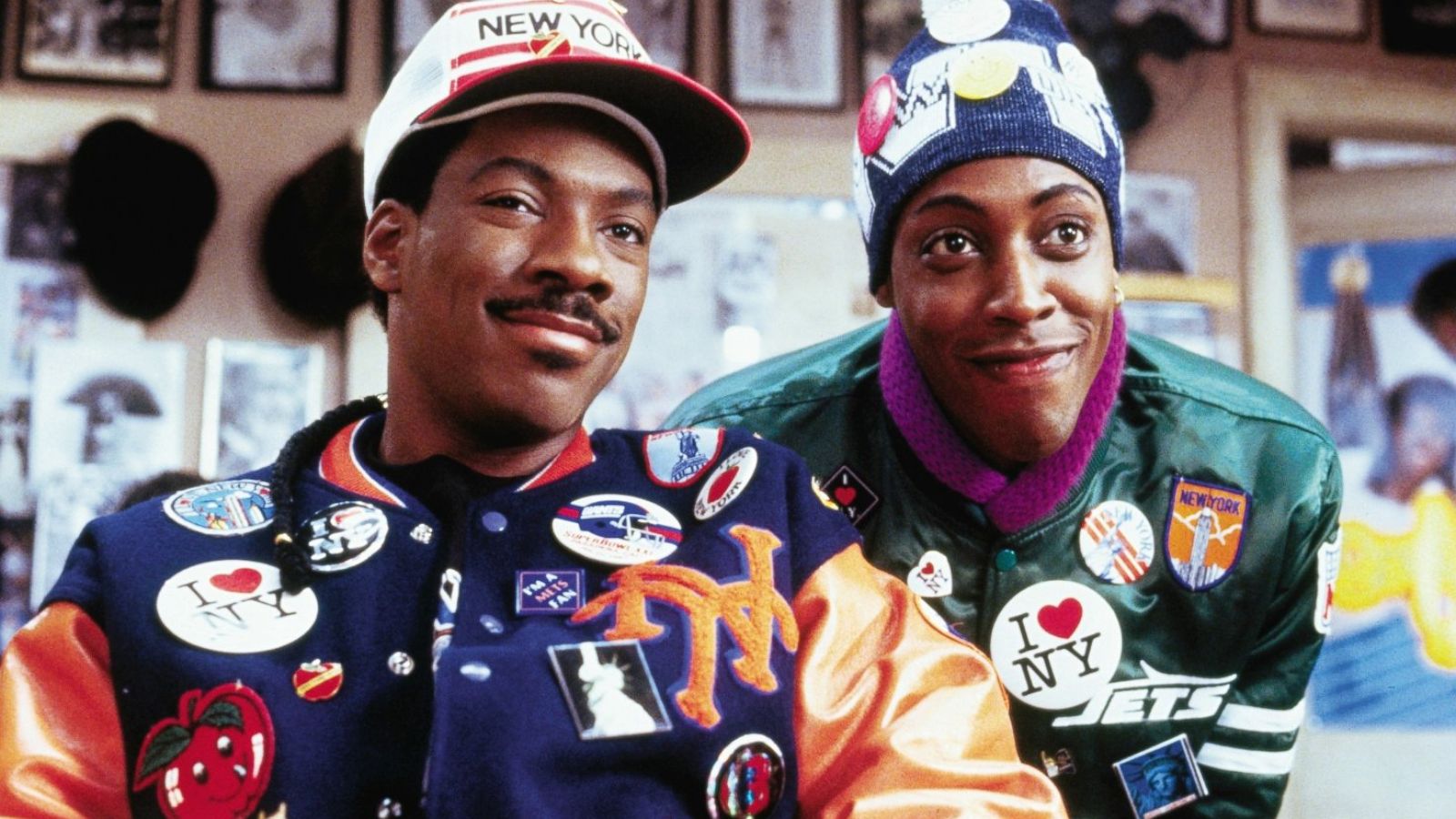 Eddie Murphy is known for hilarious movies featuring a lot of Black star power. Coming to America is all that and more with adult fairy tale-like story featuring a kind and idealistic African prince who comes to Queens, NY to find his queen. Akeem (Eddie Murphy) and Semi (Arsenio Hall) may be over the top, but supporting characters like Lisa, Cleo, and a group of trash-talking barbershop employees feel quite grounded. There are quotable lines, unforgettable moments, and a lot of raunchy humor.

Last Holiday is another movie about a Black woman realizing her dreams. A health diagnosis encourages Georgia (Queen Latifah) to quit her job, take all of her money, and go on a dream vacation. She takes fun risks, indulges in self-care, and charms an entire resort full of people along the way. The film combines holiday delight with the musings we all have about what we would do if we threw caution to the wind.

Miss Juneteenth is a heartfelt story about Black motherhood and the impact of Juneteenth on Black Texans. Former Miss Juneteenth Turquoise is relatable to many young moms with dreams deferred and plans derailed.

She bonds with her daughter Kai after she enters in the same scholarship pageant years later. The film doesn’t aim to teach viewers some grandiose lesson. It’s simply one woman’s journey into reflection as she lives her normal life. Miss Juneteeth is beautiful and features some truly lovely mom-daughter moments.

Akeelah and the Bee

There’s nothing that sparks joy quite like an underdog story. Akeelah is an avid speller from Los Angeles who stands up against preconceived notions and odds to make her way to the Scripps National Spelling Bee. The film deals with a lot of issues including race, educational systems, self-esteem, friendship, and social stigmas, among others, while sparking a lot of joy every time Akeelah advances forward.

Black Panther brought people around the world a lot of joy. It was empowering and affirming to see Black people leading the most socially and technologically advanced nation in the world, for women to be effective leaders, and to see the film’s overall celebration of different cultures in Africa. It’s rare to see a superhero movie or series that centers on Black characters, and Black Panther proved that our stories can score big with audiences and box offices alike.

Yes, this is a Hallmark holiday movie. But, honestly, is there anything more joyful than a Christmas flick? The plots are mostly predictable, the romance is super sweet, and there’s always a lovely ending. A lot of network Christmas movies don’t have Black women protagonists, but Christmas Everlasting stars Tatyana Ali as Lucy, a woman who reconnects with her past. She returns home to claim property in her sister’s will and learns a lot more about her family history (and love) along the way.

The Fresh Prince of Bel-Air 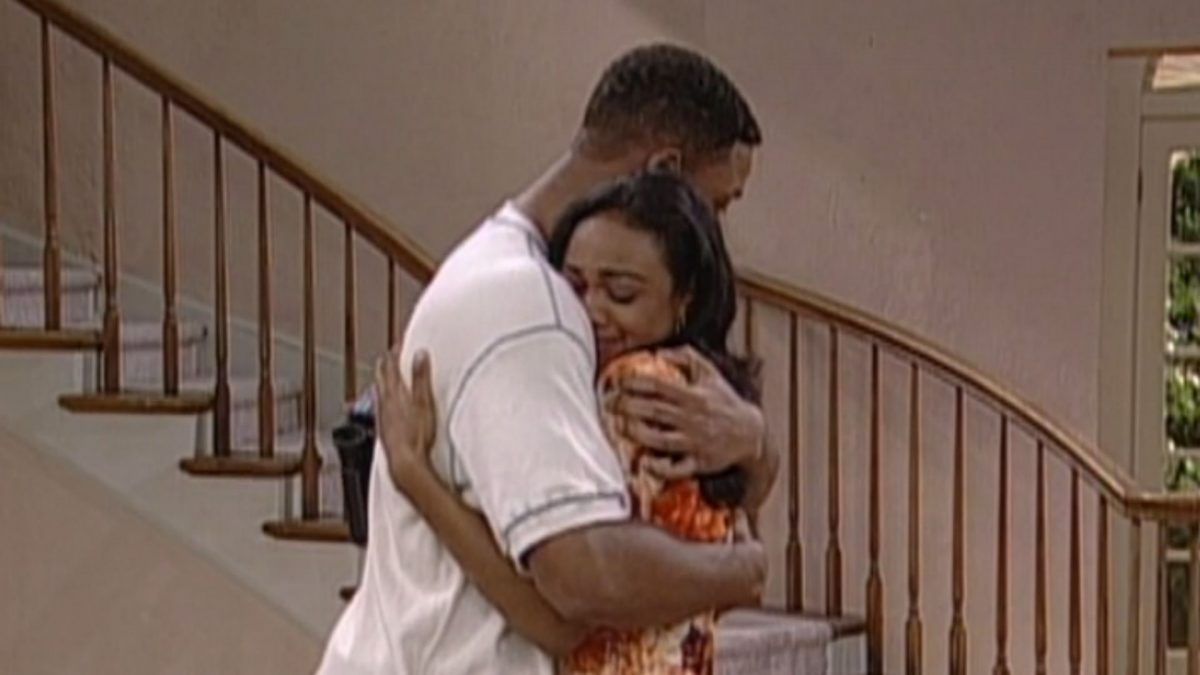 Speaking of Tatyana Ali, most people were first introduced to her in The Fresh Prince of Bel-Air. There’s probably not too many ’90s kids who don’t know all about how Will’s life got flipped and turned upside down. In The French Prince, Will’s antics are just as colorful as his clothes as he pulls the Banks family into a ton of schemes. The Fresh Prince also shows that Black people face some of the same issues despite their socioeconomic status.

This one is for the kids (and kids at heart). Netflix’s Motown Magic follows eight-year-old Ben who uses a magic paintbrush to bring the street around him to life. The show features songs from iconic Black artists like The Jackson 5, Stevie Wonder, and Michael Jackson, thereby bridging the gap between generations. There aren’t nearly enough magical/fantasy shows with Black protagonists so this is a true treasure.

More Black witches is never a bad thing, especially when they are the focus of the story. The Juju webseries follows three millennial besties who discover that they are witches. There’s a lot of great humor, self-discovery, real talk, and fun friendship moments in this narrative on top of some magickal moments.

Spider-Man: Into the Spider-Verse

Miles Morales is the definition of joy. This Afro-Latino kid’s journey towards becoming a hero in his own way is heartfelt, striking, and inspiring for so many fans. Miles’ heart, laughter, self-doubt, and triumph is reflective of how the world should want to see Black boys not only survive but thrive while being their authentic selves.

As usual, this list isn’t exhaustive, but it’s a start. There’s a lot of layers to the Black experience. We want to see more of our joy, wonder, fantasy, and magic being pushed to the forefront, because they matter just as much as our pain. Black joy is powerful and worthy of being seen.