10 Pop Culture Hamburger Moments That Give Us the Craving - Nerdist

10 Pop Culture Hamburger Moments That Give Us the Craving

There’s never a bad time to have a cheeseburger. But there are certain moments when that classic American meal really hits the spot. For instance, after watching a character onscreen devour one. Whether it’s the burger itself or the circumstances surrounding how they got it, seeing someone in a movie or TV show eat a cheeseburger always makes us crave one ourselves.

And in honor of National Hamburger Day, here are ten moments in pop culture that make us desperate to bite into one of our own. 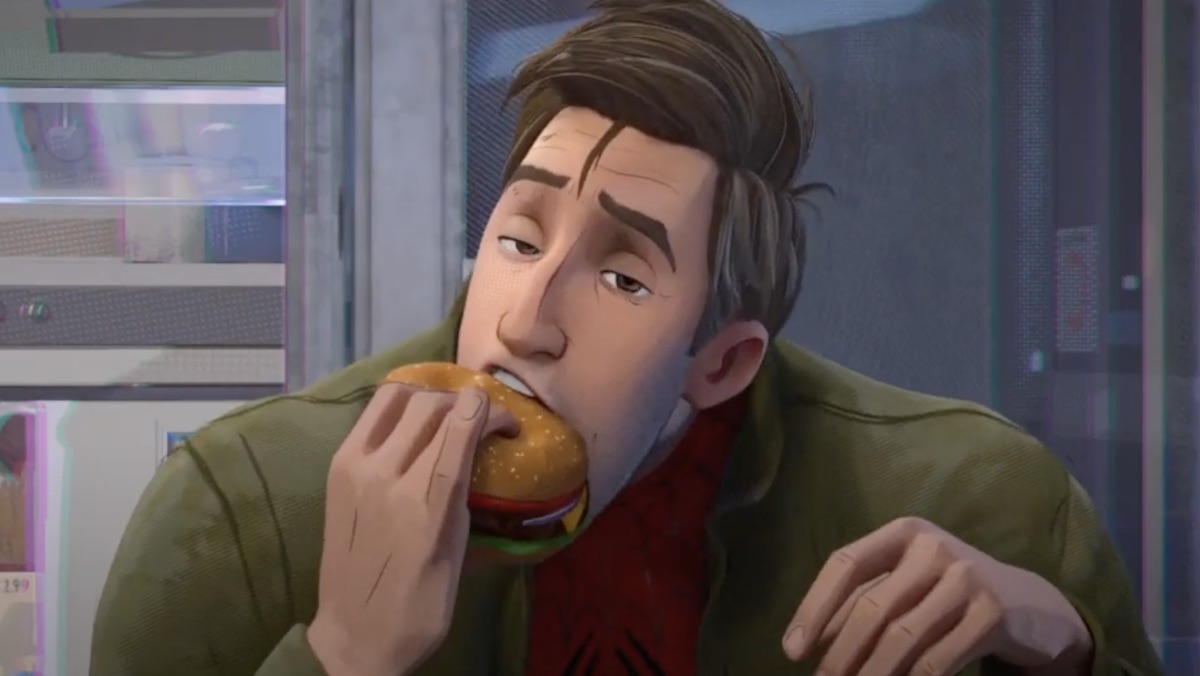 What would you do in an alternate dimension? Whatever your answer, it’s not as good as what Spider-Man: Into the Spider-Verse‘s Peter (B.) Parker did. He enjoyed his favorite burger from a place that closed years earlier in his own dimension. His reunion with a lost love (which he knows a lot about) makes us desperate to go to our own favorite burger spot immediately for fear that it too might close someday. 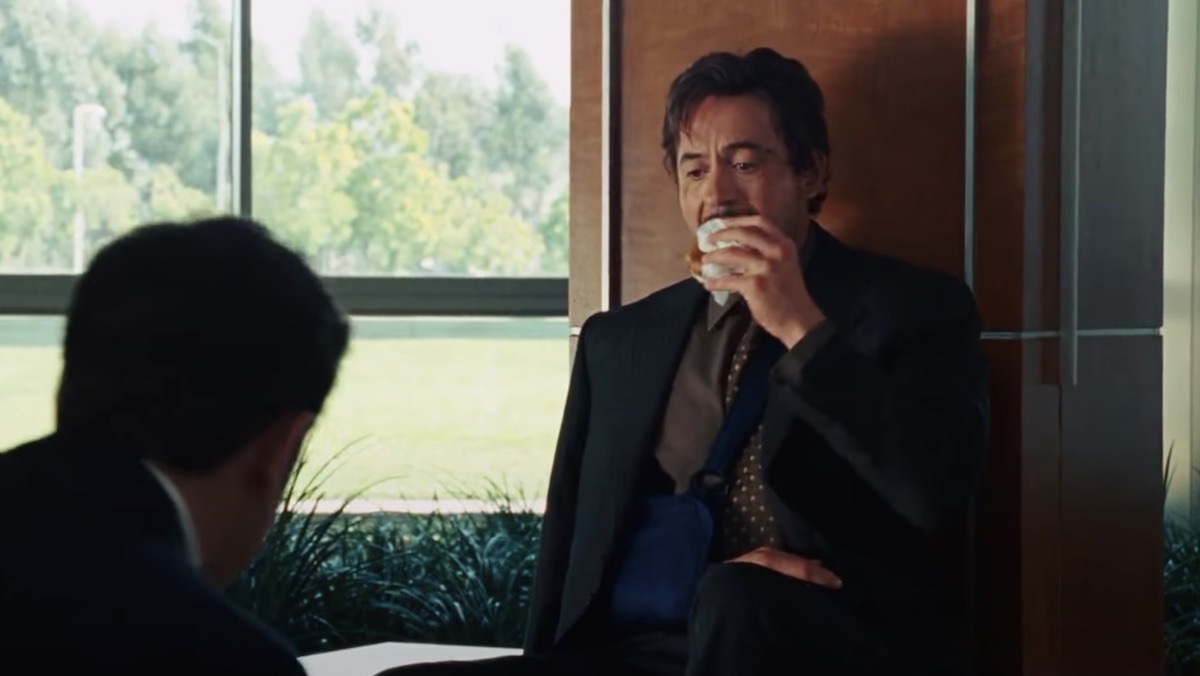 A harrowing experience can make us appreciate the small pleasures in life, things we took for granted because we always assumed they’d be there for us. For Tony Stark in Iron Man, that was an American cheeseburger. That was his first order of business after three months in captivity in Afghanistan. Even if we don’t get to see a lot of his burger, we can empathize with that longing for one after a difficult day or week. Burgers are perfect comfort food, and it’s the ideal way to wash a terrible taste out of your mouth.

How I Met Your Mother Searches for NYC’s Best Burger 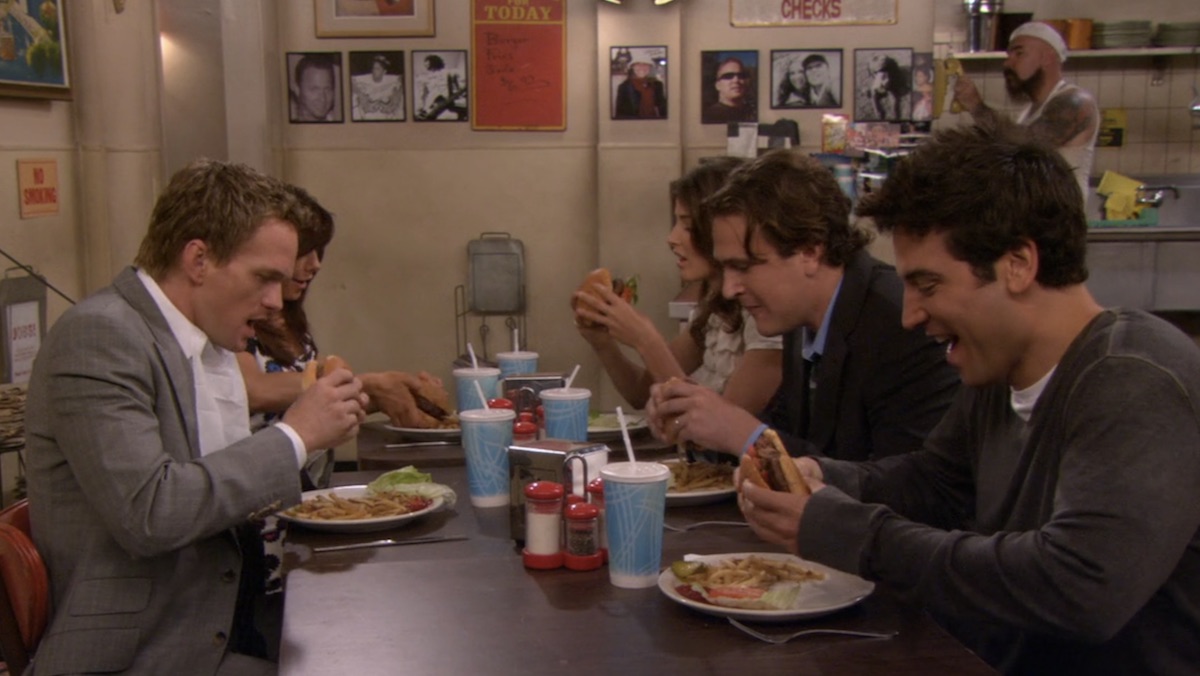 Marshall’s quest to rediscover “the best burger in New York” led to one of the most relatable episodes of How I Met Your Mother. He spent years eating burgers trying to find the mysterious joint he stumbled upon after first moving to the city. But when the gang (and Regis Philbin) joined the hunt, they were continuously thwarted. With nearly all hope gone, they finally located the spot, and it was everything Marshall remembered. Watching the group bite into those mythic burgers makes us want to sit down with our friends to have one. We’d also like Regis Philbin to be there too.

The Double Burger on Layaway in Good Will Hunting 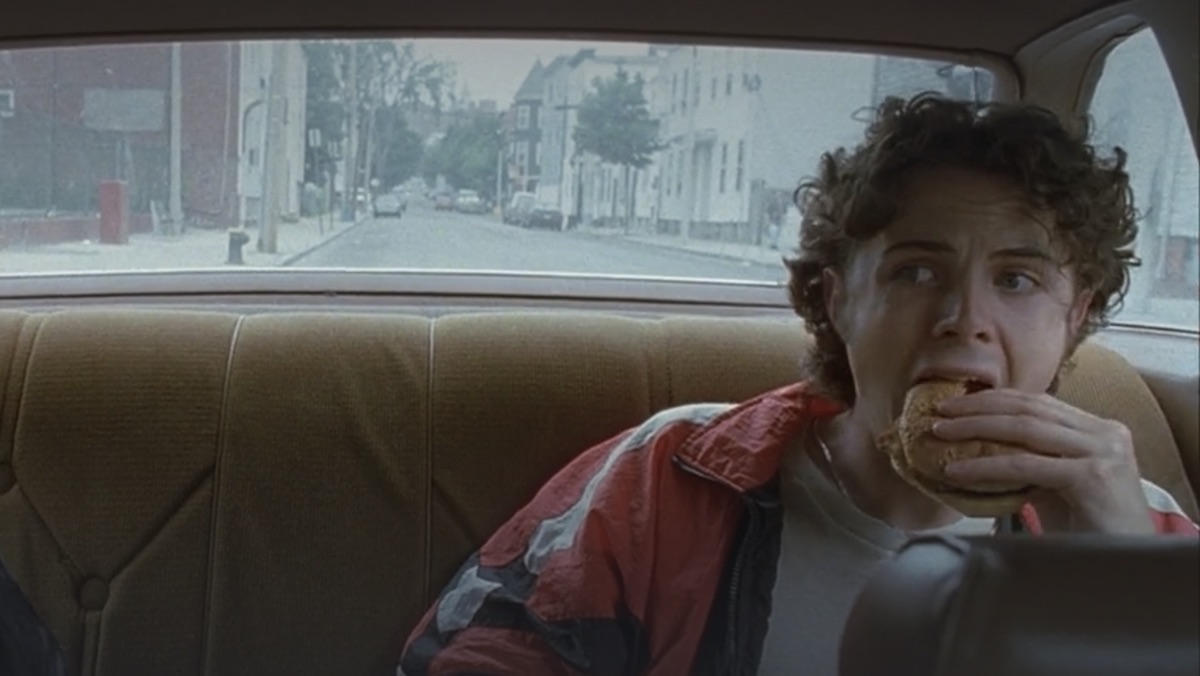 This classic scene from Good Will Hunting is less about seeing someone eating a burger and more about relating to their desire to finally get one. Chuckie won’t give a frustrated, moneyless Morgan his “dooouble buuurger.” Instead, Chuckie puts it on his car’s dashboard while offering a layaway system. That only makes Morgan angrier, and we can relate. When you’re hungry, you’re hungry, and the closer you are to eating, the more anxious you get. What really makes us sympathize with Morgan is when his delayed meal is interrupted by Will starting a fight. Kid just wanted his double burger, and so do we after seeing him constantly denied that.

Pulp Fiction has arguably the most famous hamburger-eating scene in history. (And also the most famous burger discussion in movie history, culminating with the naming of the “Royale with Cheese.”). Samuel L. Jackson’s up-close encounter with a tasty Big Kahuna Burger makes that cheeseburger seem like the best fast food item ever made. It looks good enough to die for. Or even to murder for. Are we sure Marsellus Wallace’s briefcase wasn’t just filled with more burgers?

Vicktor Destroys a Whopper in The Terminal

A burger is best when we’re absolutely starving. That combination of meat, cheese, and bread is everything we want when we’re ravished. Especially because they aren’t that expensive. That’s why Tom Hanks’ stranded airport prisoner Viktor Navorski started devouring them in The Terminal as soon as he got a couple quarters in his pocket. The way he enjoys each of his Burger King items reminds us of every desperate fast food meal we’ve ever had when we were broke or desperate to eat. This movie is basically the best commercial for a Whopper ever. 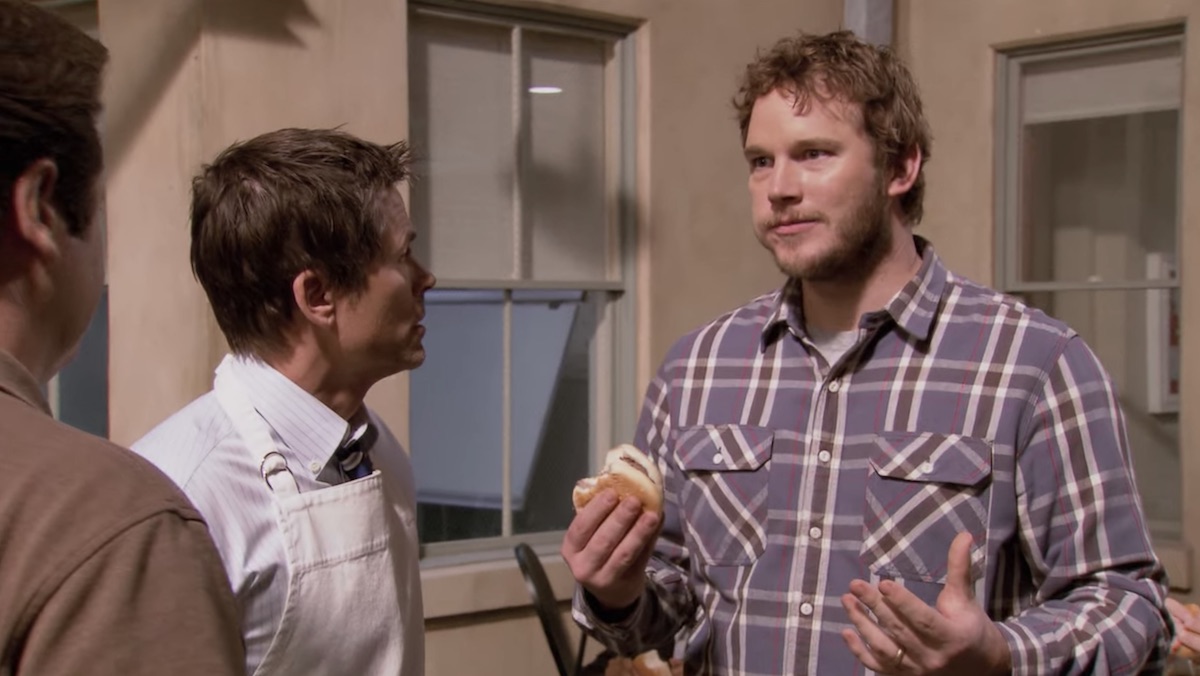 Ron Swanson and Chris Traeger’s Burger Cook-Off on Parks and Recreation pitted a classic American-style beef burger with… whatever it was that Chris made. It’s hard to call this a contest; it was more of a pummeling. Everyone—Chris included—acknowledged that Ron’s no-frills entrant was vastly superior. Seeing everyone’s joy at eating Ron’s burger makes us want to host our own cook-off. All non-beef entries will be forbidden.

There’s one thing every burger lover knows: Harold and Kumar’s dangerous journey to White Castle was all worth it. Their pyramid of sliders remains the envy of stoners and non-stoners alike, especially because we get to see them eat it during one of the greatest burger montages in movie history. Those guys really earned it, and a burger earned tastes extra sweet. But so does a free one. And since a repentant Neil Patrick Harris paid for theirs, they got the best of both worlds.

This Is the End Does a Carl’s Jr. Cleanse 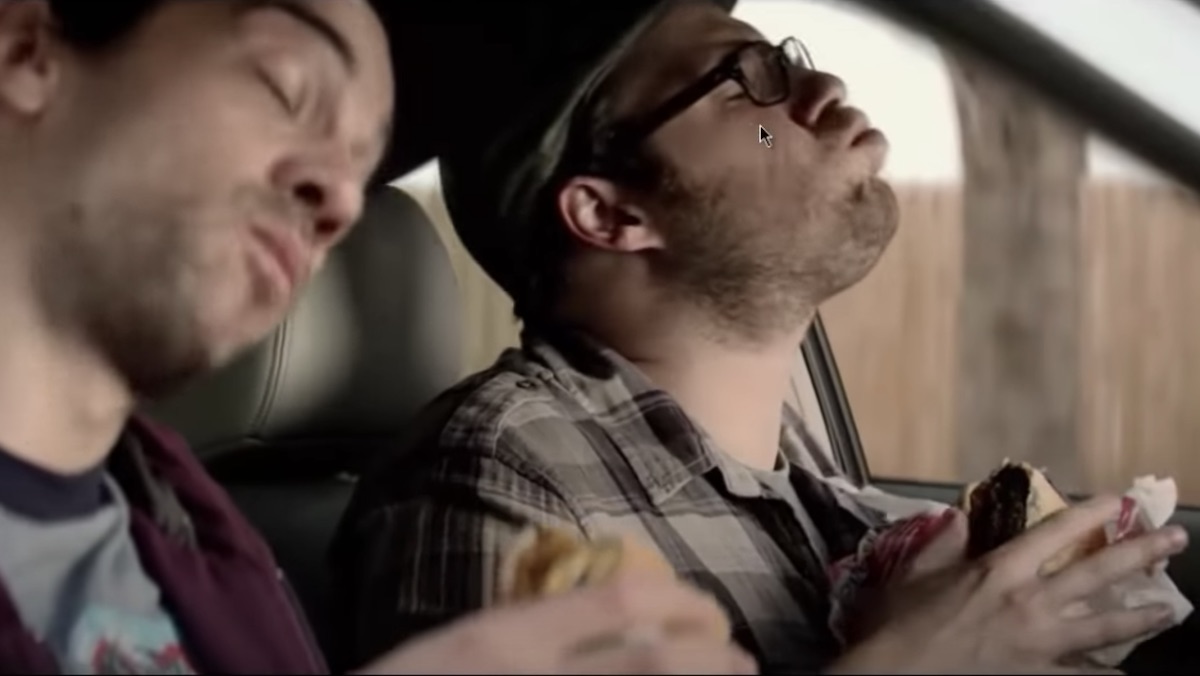 This Is the End has the saddest burger-related moment in all of pop culture. James Franco announces the In-N-Out truck is on its way right before the Rapture takes place. All those lives lost…before they could have a double-double animal style. So sad. Fortunately, the movie also contains one of the best burger scenes ever. Seth Rogen breaks his gluten-free cleanse and demolishes a delicious-looking Carl’s Jr. burger with Jay Baruchel. They didn’t get into Heaven initially, but they got a taste of it here. And every time we watch them eat, we’re ready for a burger cleanse too. 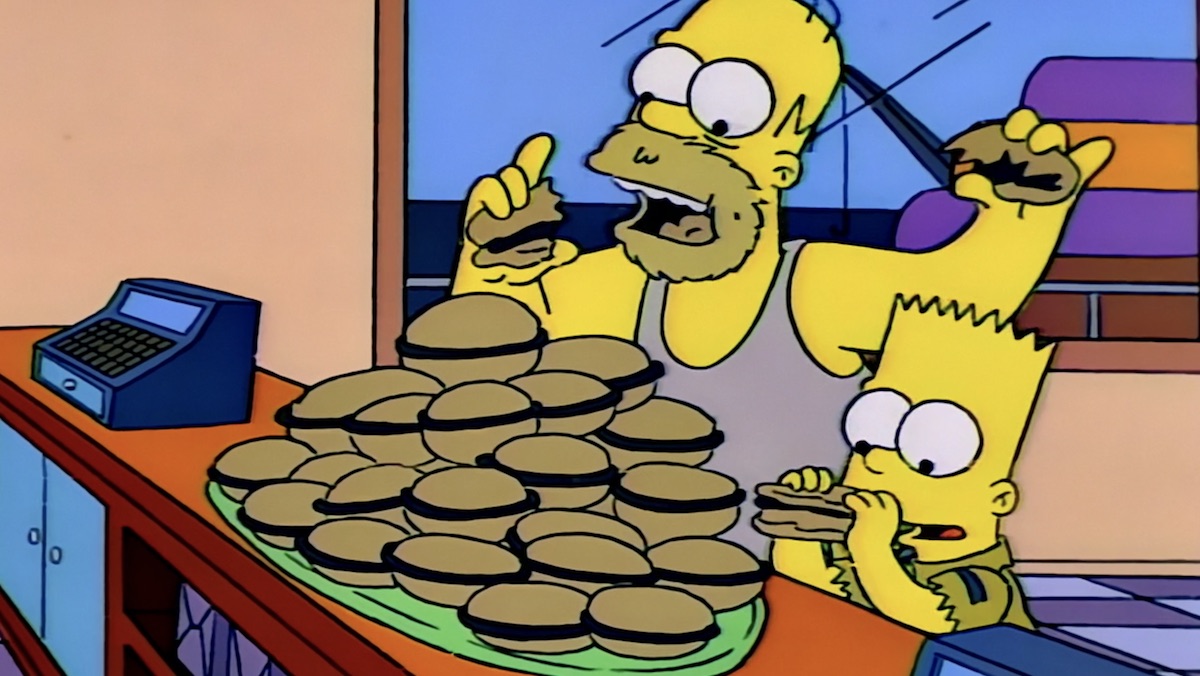 There are lots of great burger moments from The Simpsons, but Homer’s massive Krusty Burger order after being stranded at sea following a disastrous Boy Scout trip is the one that really makes us hungry. He’s tired, desperate, and absolutely starving. No one has ever wanted a burger more, and that makes us want one too. Plus, we’ve always dreamed of running into our favorite joint and screaming an order of 700 burgers.

And after thinking about all these moments, we might actually have to do that. We’re really craving a burger right now.