It’s been a long day. Or a long week. Or a long life. And all you want to do is curl up with a nice, cold block of Ben and Jerry’s and watch the latest episode of The Outsider. So you pull up an app on your phone and have your cold carton of dopamine hits delivered right to your window by drone.

‘Tis a mighty dream. And one that will, probably in a few years, come true for some people in New York.

News of the incoming drone deliveries for New Yorkers was announced in a recent press release (via Futurism), by Terra Drone Europe, an arm of Japan-based drone provider, Terra Drone. The company is teaming up with Unilever, a British-Dutch transnational that owns a list of brands longer than The Irishman—seriously, the list of brands will pop eyes—which, of course, includes Ben & Jerry’s. The pair are teaming up to expand the latter company’s “Ice Cream Now” service. Which sounds like something a five-year-old would come up with, but still, more progress on that front por favor.

Terra Drone and Unilver actually put on a demonstration of the Ben & Jerry’s delivery drone in action, although apparently it just flew around a Unilver facility in New York. And sadly, there’s not even video of that. Almost tragically, dare we say, as seeing ice cream fly really seems like it could be a defining moment of 2020. 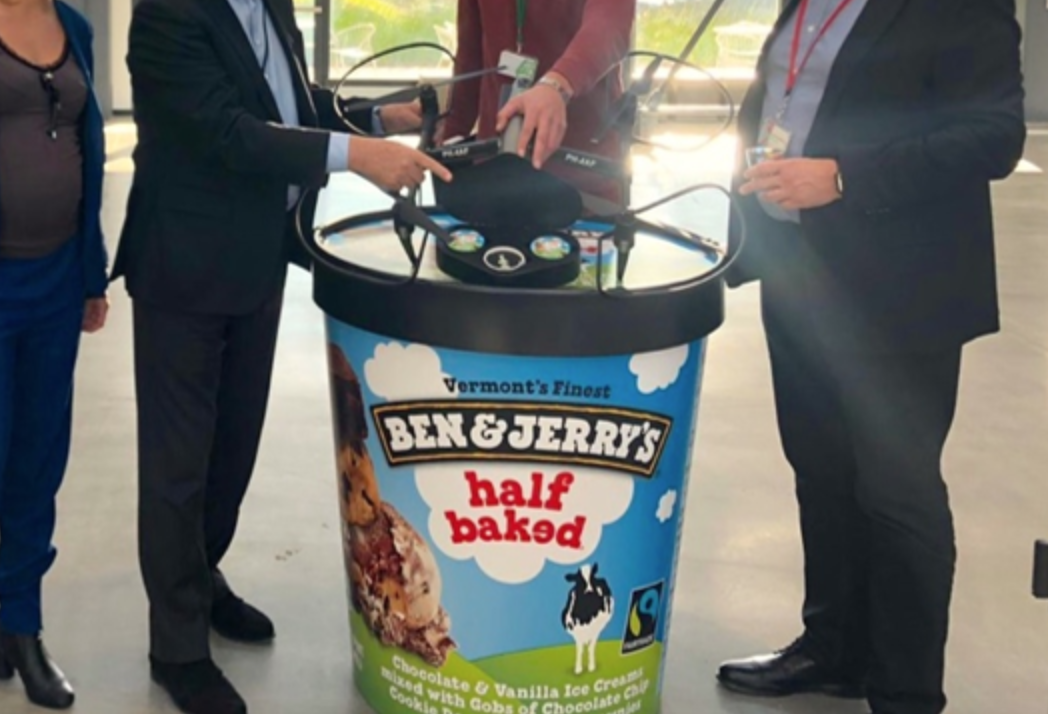 But the less-than-delicious bite of demonstration, which also only involved the scandalously small 2.5-ounce Ben & Jerry’s “minicups,” does not mean this team won’t deliver Ice Cream Now. According to the press release, ICN “has already grown into a huge business worldwide,” and worldwide regulations around drone use are likely to become more “flexible” in the near future. (We tried to find out where Ice Cream Now is actually active, but found el zilcho.)

We also looked into whether or not Terra Drone had any videos of its drones online to give us some sense of what the Ben & Jerry’s version will look like, but could only find the below video of a random Terra Drone performing an inspection on some kind of very tall structure in Japan. Although we still encourage you to check out at least a few seconds of the video, because it’s surprisingly mesmerizing.

There was no timeframe given for when the Ben & Jerry’s drones will take flight, but considering the scant evidence of Ice Cream Now being operational (at least in the U.S.), we’re going to guess that it’s a year or two away. But not in like the “year or two away, but really never” sense of the phrase, because plenty of companies are beginning to look into deploying food-delivery drones in New York. Which makes almost as much as sense as evolving the state’s traffic grid to go 3D.

What do you think about these Ben & Jerry’s delivery drones? Would you have tiny Ben & Jerry’s cups delivered to you by drone, or would you prefer drone developers to just work on saving more dogs? Let us know your thoughts in the comments!