ANYTHING FOR JACKSON Is This Year's HEREDITARY - Nerdist

ANYTHING FOR JACKSON Is This Year’s HEREDITARY

The A24-ifying of horror in these past few years has been a really interesting and frankly welcome shift in the genre. It grounds even the most outlandish of premises in the reality of familial strife, loss, and hopelessness. Especially in this, the most f***-offish of years, equating horror with everyday struggles and sadness feels especially relevant. Justin G. Dyck’s new film Anything for Jackson—premiering this week on Shudder in the U.S. and U.K.—tackles a lot of the same material as movies like Hereditary. But what I think works in its favor is it presents the supernatural as fact right from the get-go and uses it to reflect the psyches of its grieving lead characters.

The basic set-up is thus: a respected physician (Julian Richings) and his wife (Sheila McCarthy) abduct one of his patients, an unwed pregnant woman (Konstantina Mentalos). Through Satanic rituals and incantations, they attempt to supplant the soul of their dead grandson into the body of the unborn baby. Chaos ensues. But where some movies would indulge in the set-up to the kidnapping, Dyck and screenwriter Keith Cooper make the caper itself a done deal; the movie is about these characters dealing with their actions and the horrific power they bring into their home.

As the movie progresses, we learn more about why the couple would turn to such drastic and damnation-courting tactics, which makes them both more sympathetic and more contemptible. Their grip on sanity is already tenuous when the spirits in purgatory begin to haunt their home. I wasn’t expecting Anything for Jackson‘s most terrifying pieces to be hallucinatory visions from beyond the grave. But they always worked in a simple and unsettling way. One particular ghost has an especially upsetting dental fixation.

The performances from McCarthy and Richings perfectly thread the needle between deranged and mournful. Even when we see them performing rituals and hiding bodies and the like, they’re so sweet and polite. And it’s through these moments that the movie’s icy, wisp-thin strand of dark comedy comes in. It is absurd that this is happening; it just also comes from a real sense of longing and sadness. The tragedy that took Jackson from them is gut-wrenching the more we learn about it. It’s so bad, you kind of buy that they’d look for any way to reverse that. 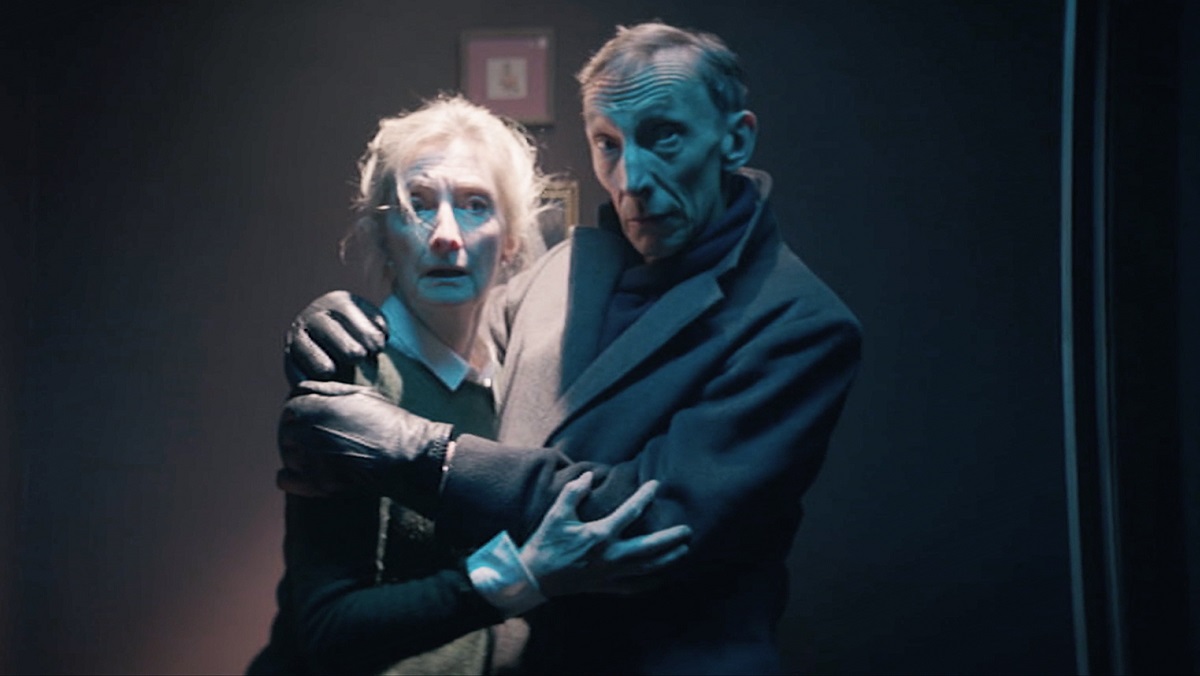 Also fascinating is that it’s one of the few horror films recently directly about motherhood that doesn’t paint the mother in a bad light. The woman, we learn, got pregnant from a one-night stand, but she’s not victimized because of that; the couple doesn’t moralize at her about the bad choice she made. And in fact, she wants to have the baby. The terror for her is losing her child, not the potential run-ins with demons and ghosts. And that just stands to make the Satanist couple’s actions more insidious. It all reinforces the theme of grief and desperation making a healthy habitat for evil to flourish.

While not as extreme as some might expect, Anything for Jackson is nevertheless and supremely creepy. At times horrific, it explores characters at their breaking point. And with its wintry setting, it’s the perfect horror for the end of a truly emotionally taxing year.

Anything for Jackson premieres on Shudder on December 3.