7 HARLEY QUINN Stories to Read Before Her New Cartoon - Nerdist

7 HARLEY QUINN Stories to Read Before Her New Cartoon

Harley Quinn is perhaps the most important comic book character to ever originate outside the comics medium (sorry, Jimmy Olsen.) Debuting in Batman: The Animated Series in 1992 as the Joker’s put upon girlfriend and sidekick, Harley became so popular she eventually shoved her way into proper DC continuity. Now she’s more beloved than the vast majority of other DC characters.

Harley has made appearances on the big screen in Suicide Squad and the upcoming Birds of Prey, and will soon star in her own animated series on DC Universe, which just received its first trailer at Comic Con. As a primer for fans who want to read Harley’s greatest and most significant adventures, we’ve gathered what we consider some of her very best (and most nutso) comic stories. These seven tales are the cream of the crop for Gotham City’s most notorious henchwoman-turned-hero-turned icon. 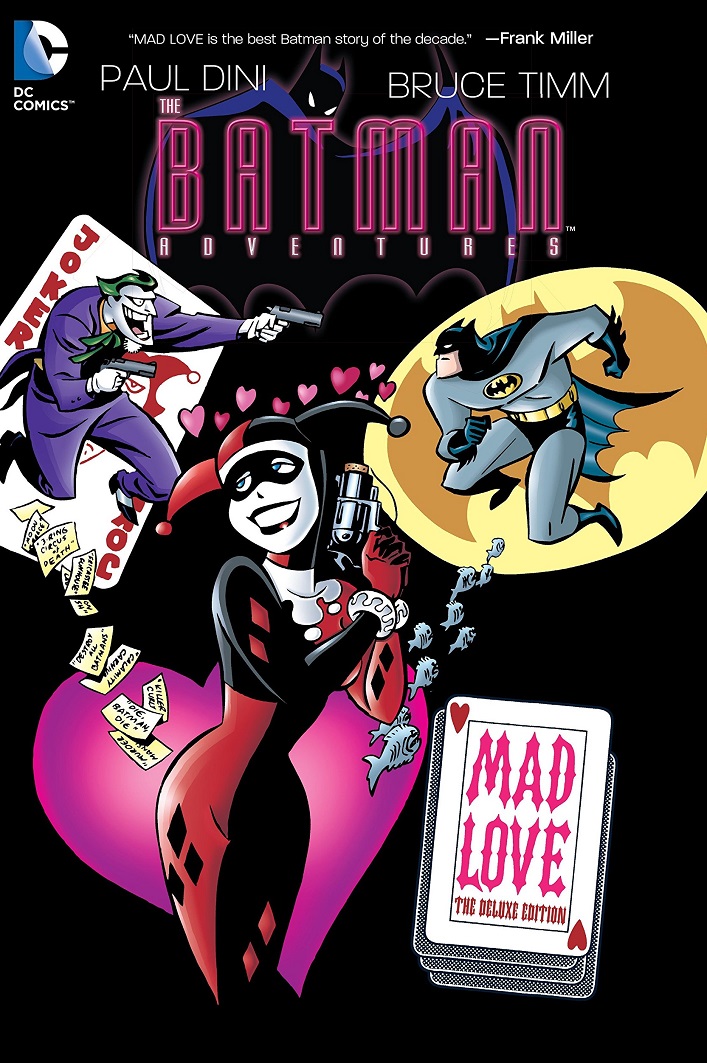 Years before it was adapted into an episode of Batman: The Animated Series, “Mad Love” was a one-shot comic book produced by B:TAS‘ own Bruce Timm and Paul Dini. It told Harley’s complete origin story for the very first time, chronicling her journey from the well meaning Dr. Harleen Quinzel into the Joker’s maniacal moll. It’s the foundation for her entire character, spilling over into the mainstream DCU and the DCEU as well. While one could just watch the brilliant television adaptation, the original comic has bits and pieces left out for pacing reasons. If you love Harley, her story really begins here. 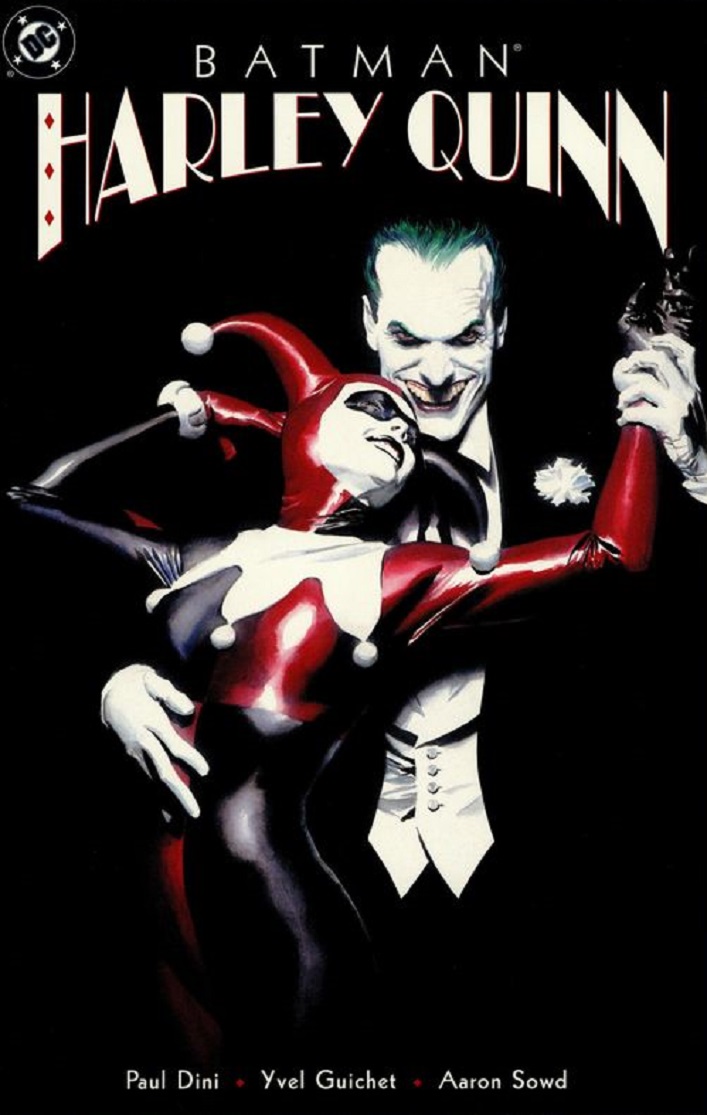 By the time she made her debut into the DC Universe proper, Harley was already a highly popular character. DC knew introducing her into mainstream continuity would be a big event, so they treated it as such. They got Harley’s co-creator Paul Dini to write the oversized Batman: Harley Quinn special; this told her origin story within the context of the current comics continuity. Dini found a way to work the DC Comics version of Gotham into her story. It paved the way for the comics version of Harley we’ve come to love these past twenty years. This comic also sports a truly iconic Alex Ross cover, one referenced for a scene in Suicide Squad. 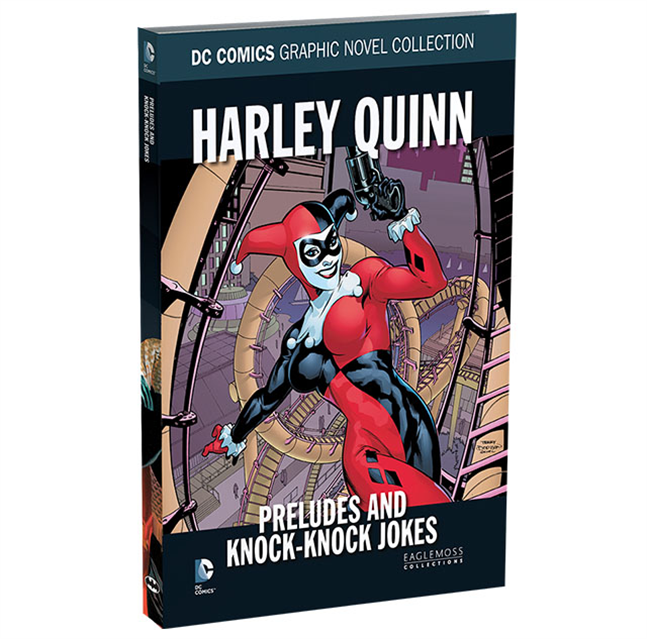 A mere year after her DCU introduction, Harley Quinn got her own ongoing series from the creative team of writer Karl Kesel and illustrated by the artistic duo of Terry and Rachel Dodson. Preludes and Knock-Knock Jokes collects the first seven issues of the Harley Quinn series from 2000-2001, and finds comedy gold in Harley stumbling from one predicament to the next with Gotham’s worst criminals. All in an effort to figure out who she is without her beloved Mr.J. The biggest contribution these early Harley stories have is that they explain just where she gets her inexplicable super strength from. 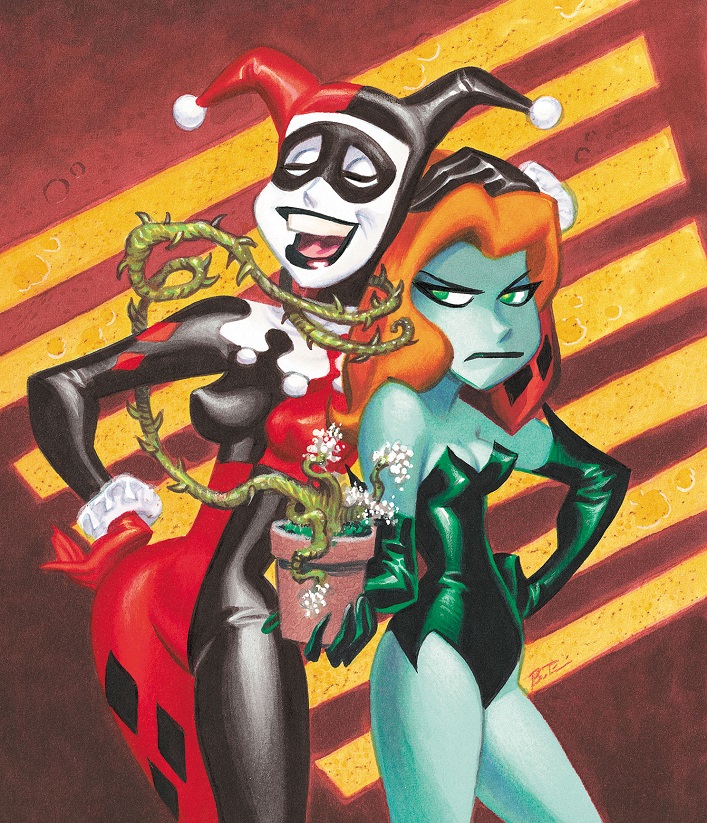 Aside from the Joker, Harley’s most important relationship is with fellow Arkham Asylum inmate Poison Ivy. This unique friendship began in the animated series, but continued in comics form. Although this 2004 3-part mini-series from Paul Dini and Bruce Timm exists in the animated series continuity, it had a huge impact on the duo’s portrayal in the regular comics from there on out.

This short series finds Harley and Ivy on a madcap adventure, in the spirit of an old Hollywood road picture. We get scenes of Harley and Ivy making a break from Arkham, a crazy brawl in a South American jungle, and Harley crooning to “Put On a Happy Face.” What more could you ask for? The current collection has this three part story, along with other Harley/Ivy adventures from Paul Dini. 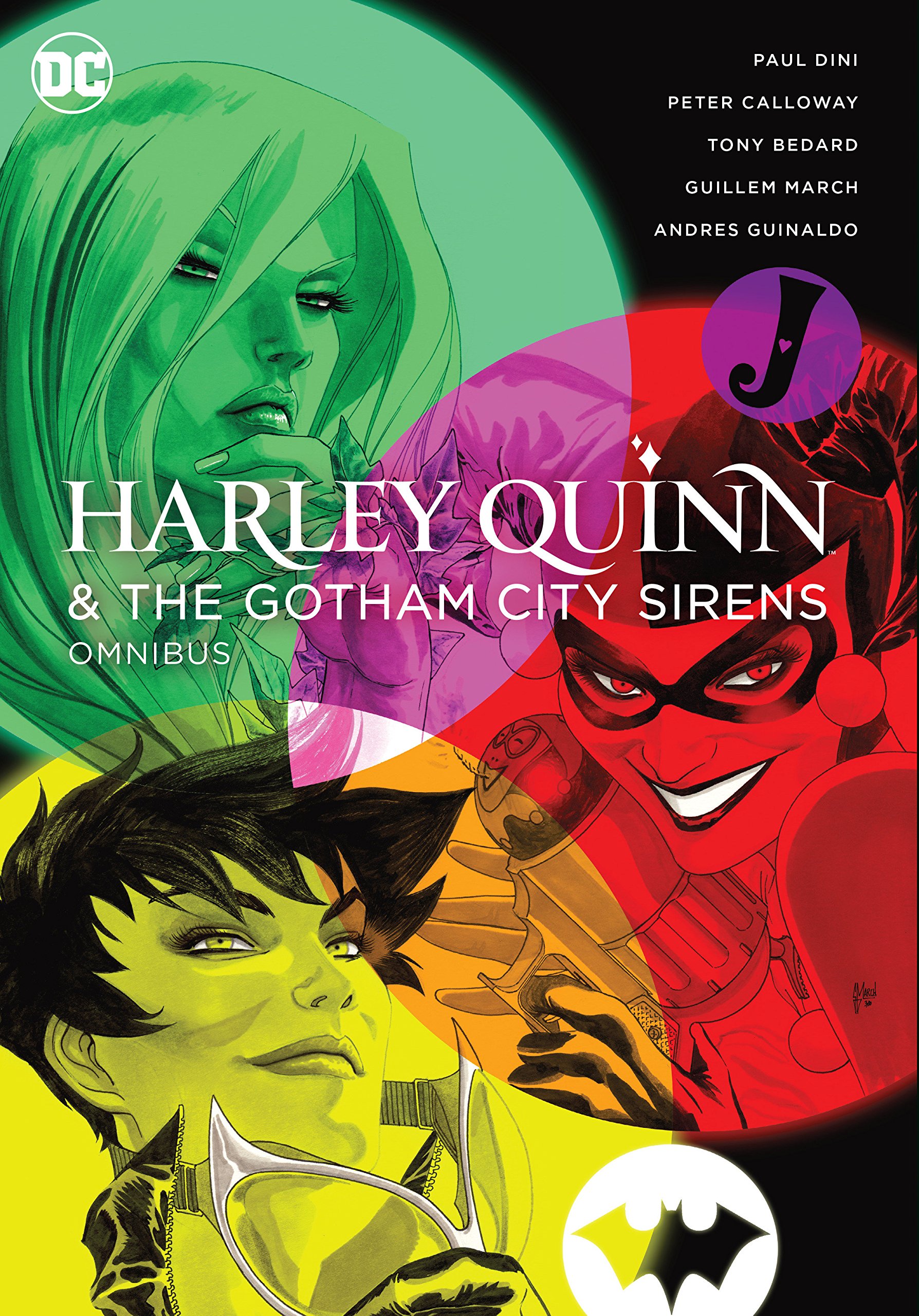 After making Harley and Ivy a team over the course of several years, her creator Paul Dini teamed her up with Gotham’s most famous femme fatale Catwoman. The series Gotham City Sirens found the three women joining together, and although all three are very different they form a bond. Harley’s childish joy comes in stark contrast to Catwoman and Ivy’s seriousness, but that just serves to make it all that much more fun. The best part of this series is seeing Catwoman and Ivy put aside their differences to break Harley of the Joker’s damaging mental hold on her psyche. And most of Guillem March’s art is absolutely stunning. The entire 26-issue series is available in omnibus format. 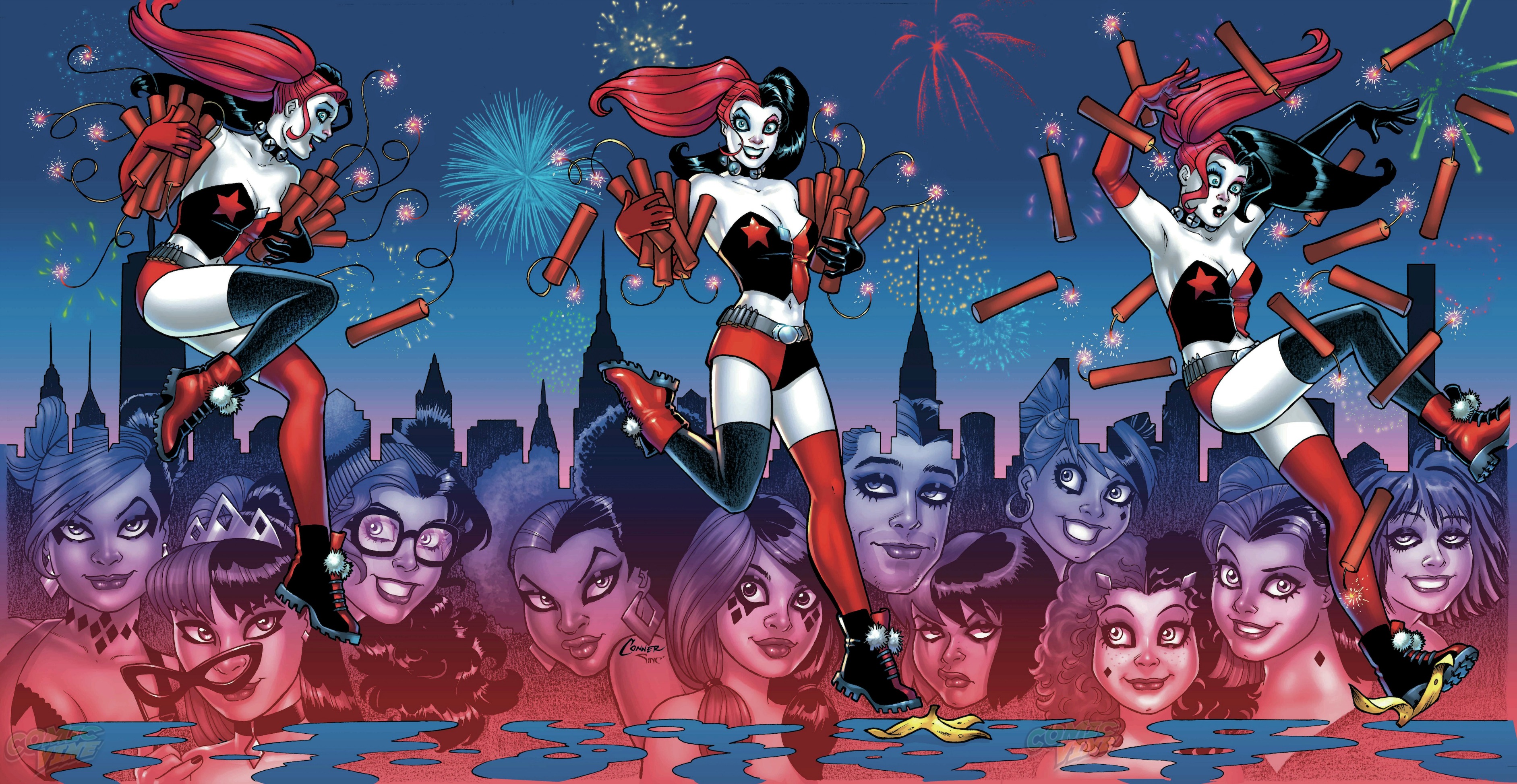 More than any other comics creators outside of her maker Paul Dini, no one has had a bigger influence on the comic book adventures of Harley than the husband and wife creative team of Jimmy Palmiotti and Amanda Conner. When DC rebooted their universe in 2011 with “The New 52” initiative, Harley got a visual makeover, and a new lease on life. In these wacky adventures, Harley leaves the Joker once and for all, and moves to Coney Island to become a roller derby queen. All while still maintaining her status as a career criminal/occasional anti-hero. The bulk of the Palmiotti/Conner run can be found in the Harley Quinn By Amanda Conner And Jimmy Palmiotti Omnibus Vol. 1 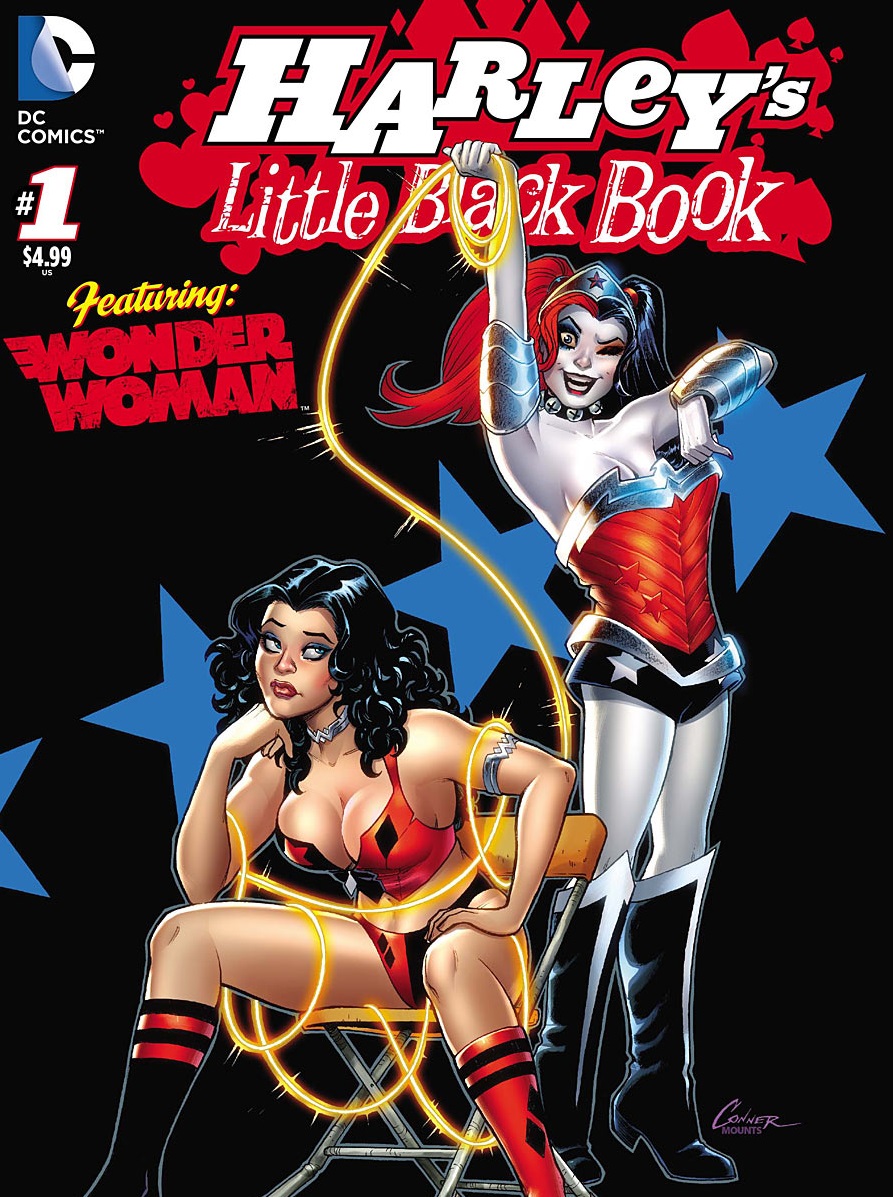 Although it only ran for six issues, Amanda Conner and Jimmy Palmiotti had another Harley-centric series in recent years. This one found our favorite demented clown girl teaming up with a variety of other DC characters; among them Superman, Wonder Woman, Green Lantern, Zatanna, and even Lobo. A group of amazing artists, including the legendary Neal Adams, joins Conner and Palmiotti and each gives a new dimension to Harley. Like with most things Harley, it’s all pure silliness. Still, the Conner/Palmiotti team is the secret sauce that gives these stories their heart.