The Catwoman Bachelorette Party That Could Have Been (Exclusive Preview)

Weddings go awry all the time, in real life and in comic books. Bruce Wayne and Selina Kyle were supposed to tie the knot over the summer, but it didn’t work out. Batman and Catwoman split and moved on, but what if the wedding happened? And what if Catwoman had the most epic bachelorette party of all time by tossing back exotic wines in the Fortress of Solitude? Our exclusive preview of Batman #68 shows the glorious celebration that could have been. 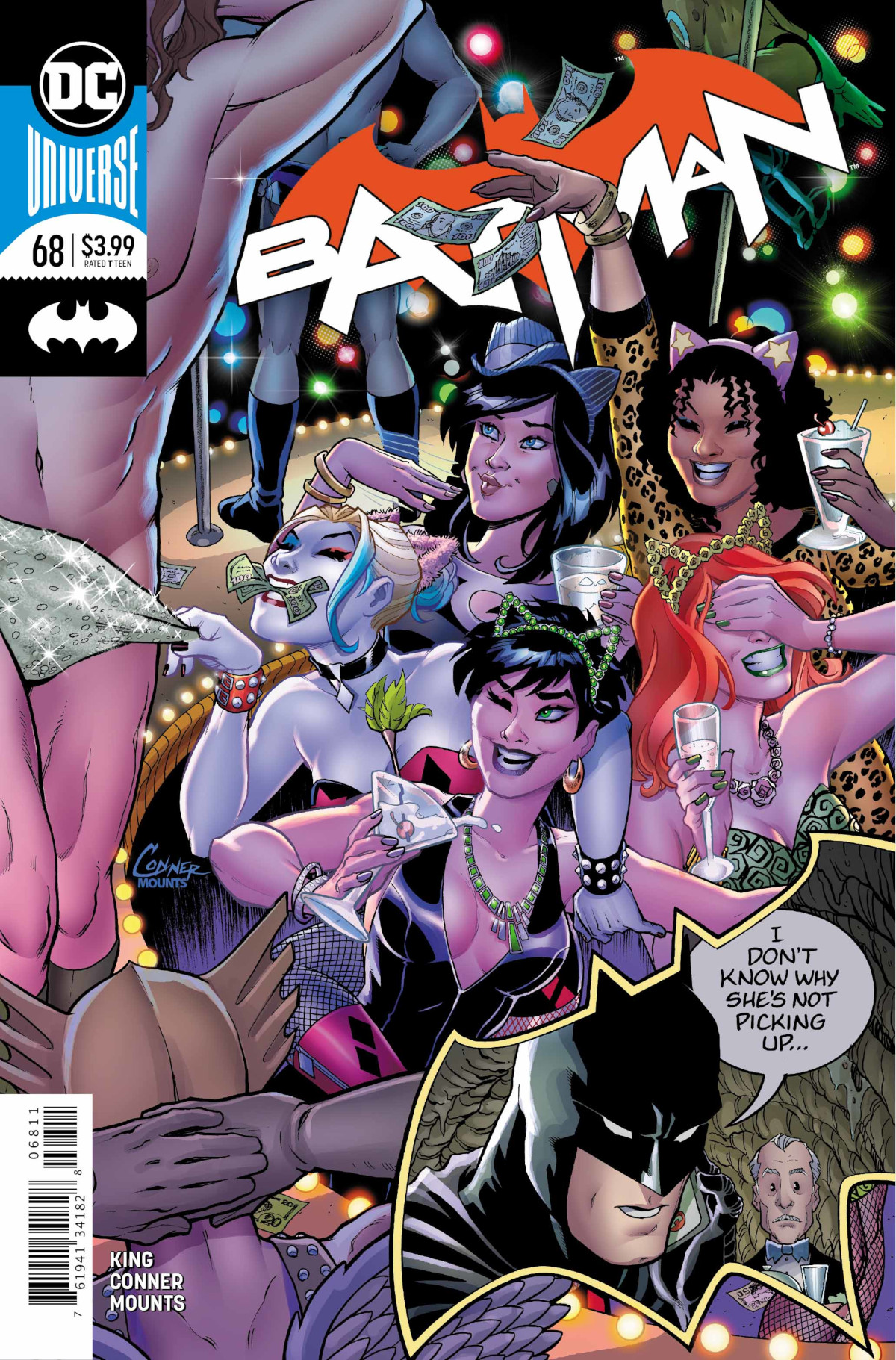 Featuring a cover and interior art by Amanda Conner, this story written by Tom King shows Knightmares tormenting Batman with dreams of the life he could have had. In these charming pages, Supergirl lets the very tipsy Lois Lane and Selina into the Fortress of Solitude for a bachelorette evening like no other in an exclusive, unique location. I bet Pinterest doesn’t have any suggestions for a hen night here. 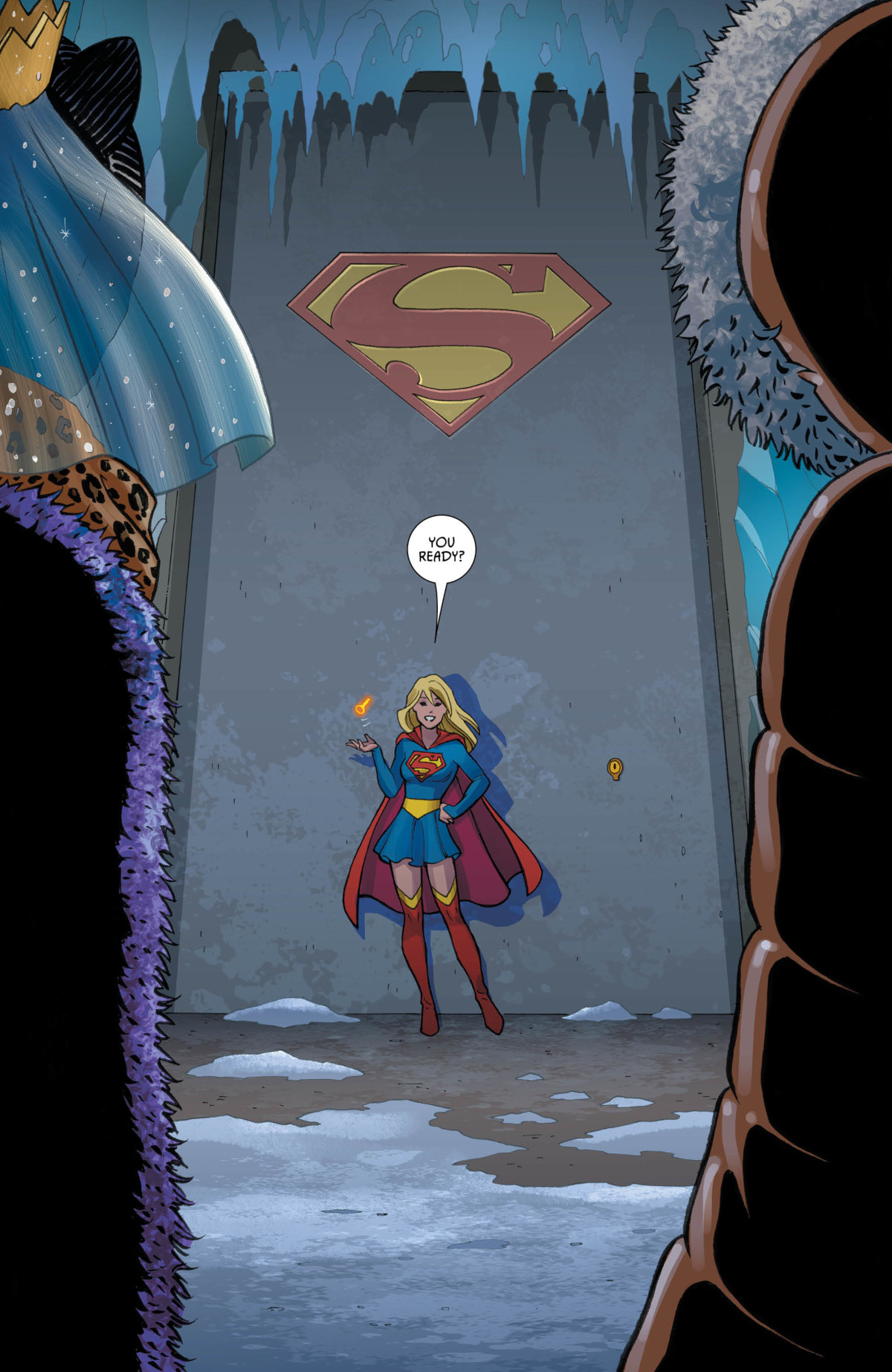 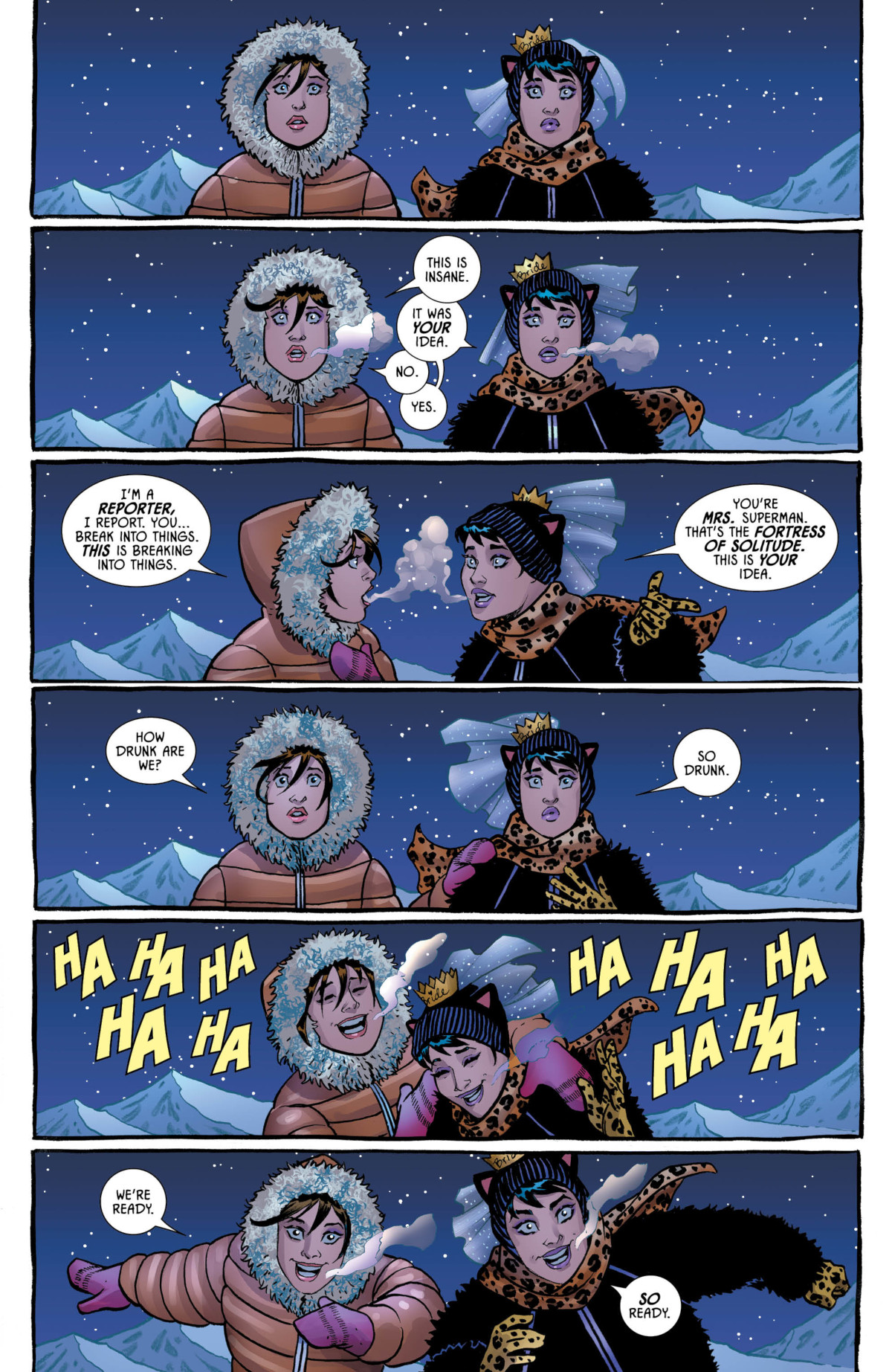 Hey, at least that brisk, cold air will probably do them some good. Conner found she was able to portray this unlikely pair in a new way in Batman #68. “Lois Lane and Selina Kyle have an unexpected friendship, for me anyway. I’ve grown up knowing these characters my whole life and I had an idea in my head of what they represent, but then something like this issue of Batman comes along that shows something new for them,” Conner shared. “I found that Catwoman has a little bit more vulnerability than she lets on and in Lois’ professional life I haven’t seen many chances for her to let loose, so it’s nice to see two different sides to characters that I thought I knew really well.” 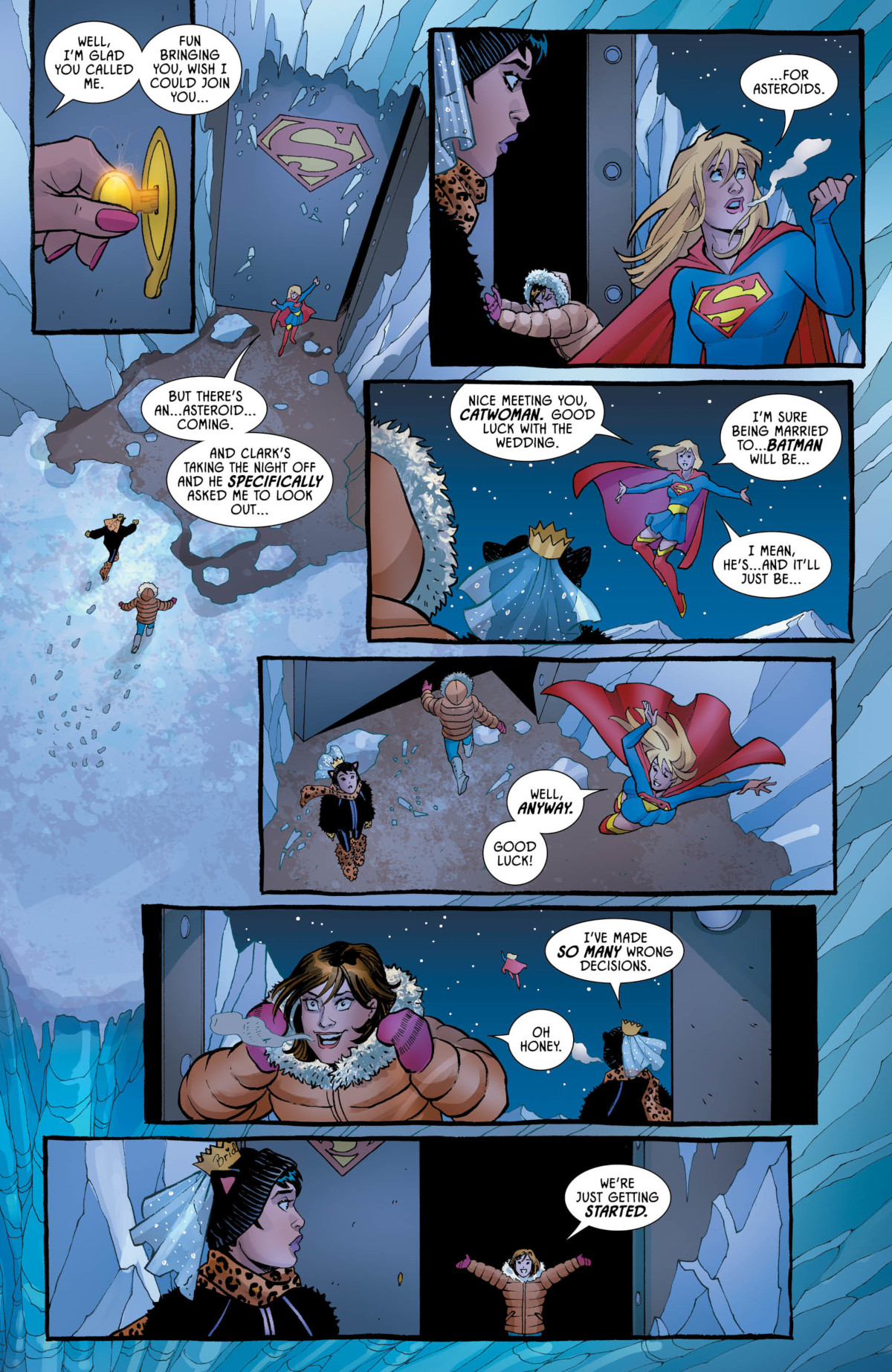 Bruce and Clark have a bachelor’s night gathering of their own, too. As you can see below, it’s…uh, slightly less exciting. Batman and Superman enjoy some tasty soup, at least?

It’s Conner’s first time drawing in a Batman comic. She shared, “I’ve never drawn an issue of Batman! But, in this issue I didn’t technically draw Batman. I drew Bruce Wayne instead of Batman. And I didn’t actually draw Superman, either! I drew Clark Kent. Doing an issue of Batman isn’t something I expected I was going to be doing this year but it turned into a nice surprise.”

Conner, Becky Cloonan, and Joëlle Jones are the first female artists to work on Batman, and we hope this kind of representation continues. 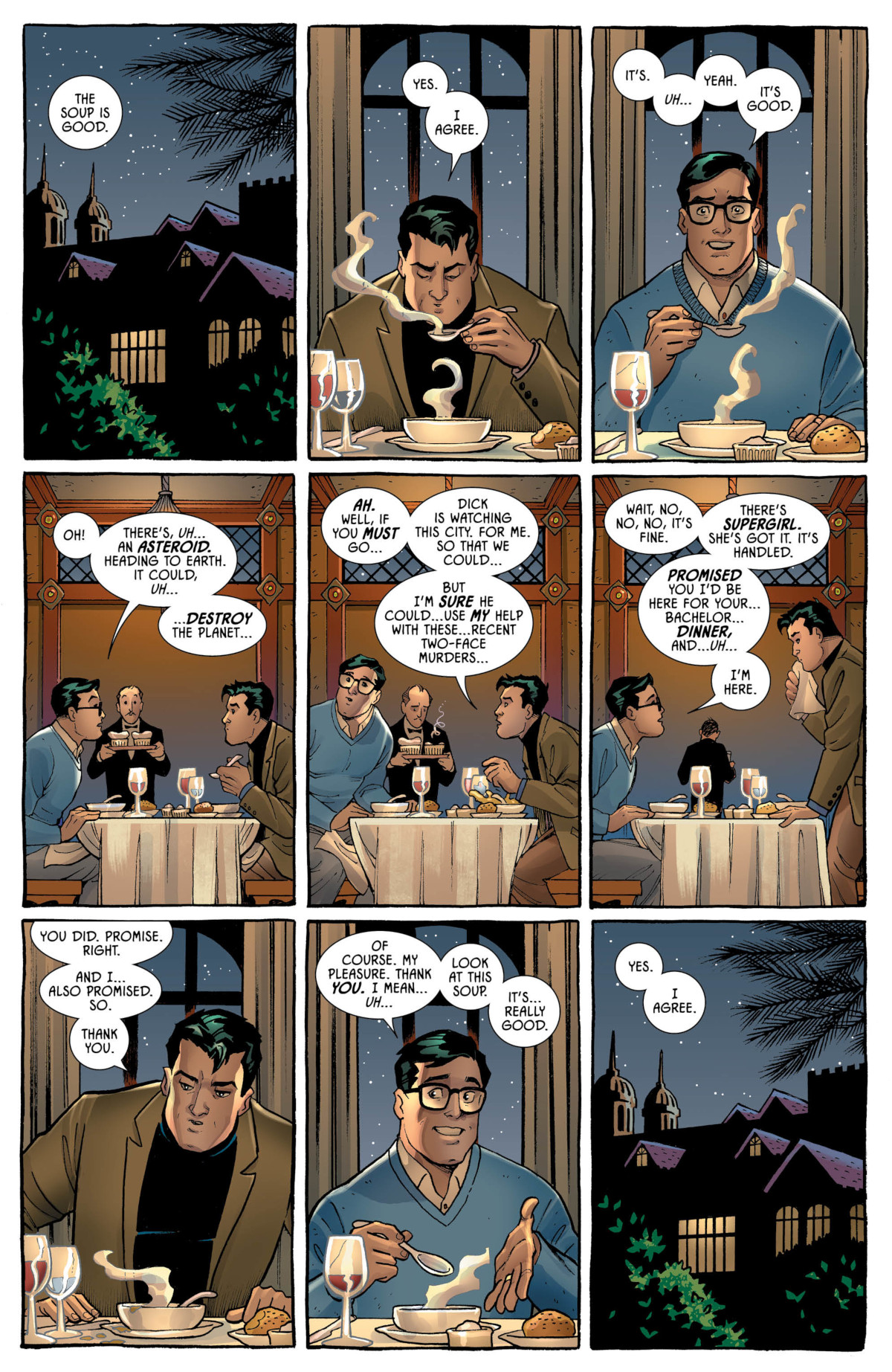 Meanwhile at the Fortress, Lois and Selina discover Superman’s stash of alcohol. A nice bottle of wine is a lovely present, and Superman’s saved the universe repeatedly. I’m not surprised he has an impressive collection. You don’t expect to see these kind of antics in Superman’s secret lair away from the world. Conner told us, “I never thought the Fortress of Solitude would be so much fun to draw or that the things Lois and Selina would be doing there would be so much fun.” 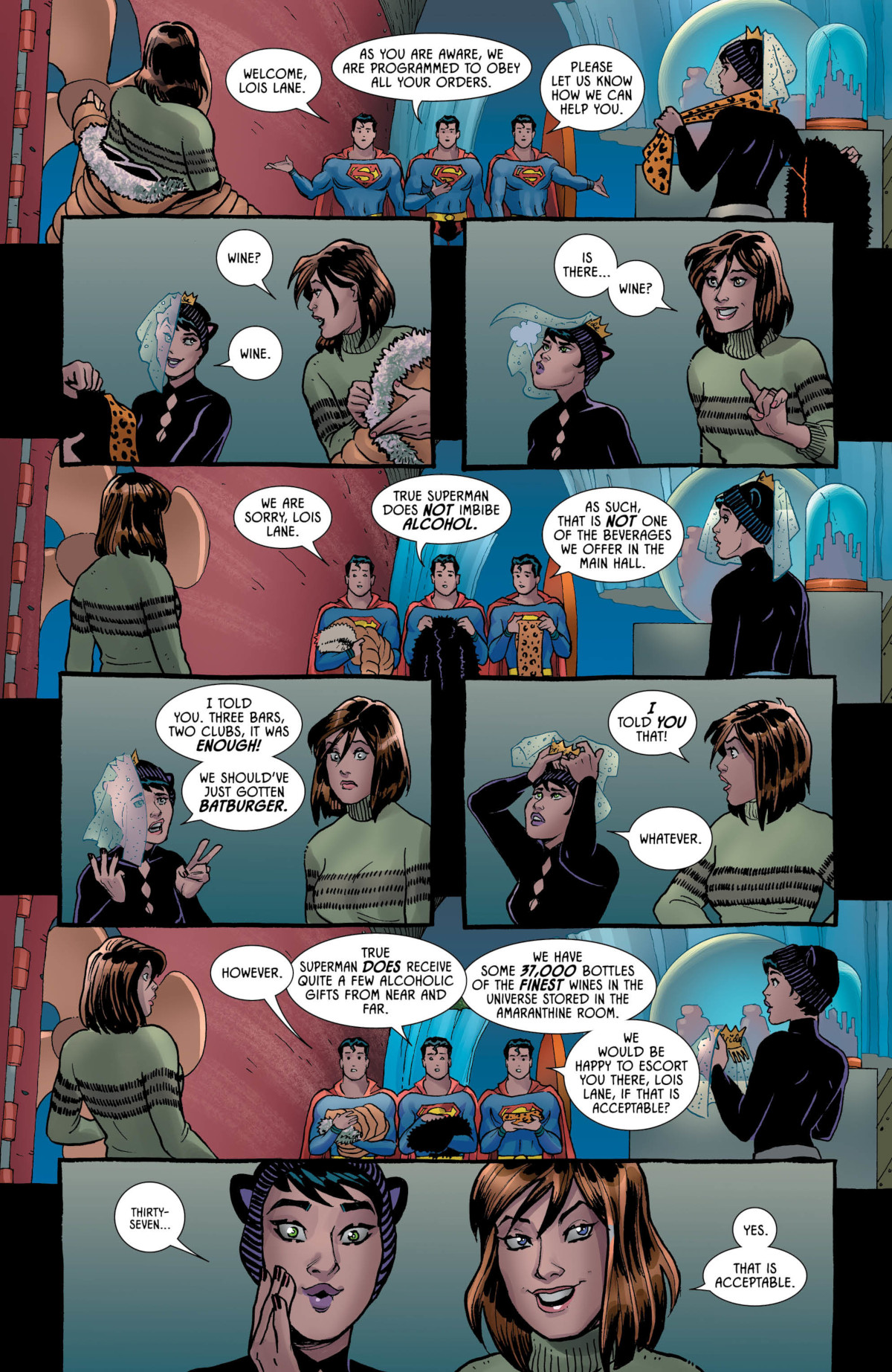 I want an invite to this unreal party stat. Also, who do I need to pay to do a one-short story focusing only on Superman’s wine cellar?

Batman is making his way to the end of his Knightmares, but his unseen enemy has a few more tricks up his sleeve. It’s time once again to stick a knife into the Caped Crusader’s broken heart, letting the groom-that-could-have-been peer in on the bachelorette (or should that be “Catchelorette”?) party that never was. Artist Amanda Conner (Harley Quinn) rejoins the Bat-family for this month’s special story—because who else you gonna invite to a shindig like this?

Batman #68 goes on sale on Wednesday, April 10. Pick it up wherever you get your comics.