There’s really no understating the stardom of actor-turned-director Clint Eastwood beginning in the mid-’60s. After a tenure on the long-running TV series Rawhide and a few notable Hollywood movies, it took a stint in Italy to turn him into a megastar. Three films under director Sergio Leone changed his career forever; the films he made in the wake of his sudden stardom prove an interesting case study. A trio of his early ’70s westerns have just received new HD transfers and Blu-ray releases from Kino Lorber, and with them we can see the interesting ways Italian westerns influenced American productions. 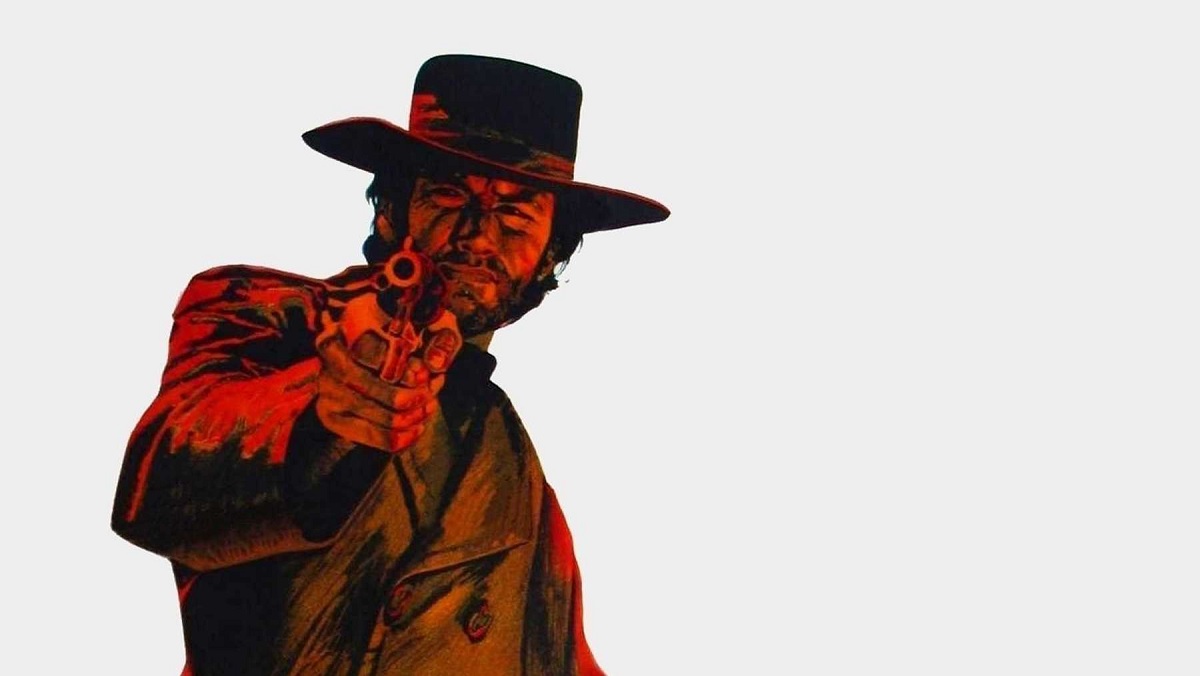 Italians and other Europeans made American-style westerns since the 1950s, but it was Leone’s landmark 1964 film A Fistful of Dollars that ushered in a specifically Italian take on the genre. While American westerns tended to be glamorizations of the good-guys-and-bad-guys Old West that might have been, Leone took those trappings, along with themes (and storylines) from Japanese samurai films to create a kind of mythic, never-real version of the American West. It was an Italian’s storybook version of the American westerns he’d watched as a child. They may as well be science fiction.

Hundreds of Italian and European westerns came in the wake of Leone’s three films with Eastwood—which also include  For a Few Dollars More and The Good, the Bad, and the Ugly—and they began to explore darker and more violent themes of revenge, persecution, and at times, full-on brutality. They also, because of the Dollars Trilogy, ushered in a new kind of film composing. Ennio Morricone’s stripped-down, Rock ‘n Roll-infused scores for those films begat dozens more soundtracks by him and others. The western not only looked different and felt different, it sounded different.

And so by 1970, four years removed from Eastwood’s final western in Italy, the now hugely popular action star could make whatever kinds of movies he wanted. While he’d done films, like Hang ’em High, that edged toward grittiness, it was Don Siegel’s 1970 film  Two Mules for Sister Sara that officially began the melding of Eastwood’s American productions with Euro-western sensibilities.

The story of Sister Sara comes right out of the kind of political/revolutionary-themed westerns in Italy at the time. Eastwood plays Hogan, a mercenary in the years following the American Civil War. He agrees to help Mexican revolutionaries take out the occupying French army. At the beginning of the film, he saves a nun (Shirley MacLaine) from a group of bandits and learns she’s also trying to get aid to the revolutionaries. Though he’s only in it for the money, he learns to sympathize with the cause while learning the truth about Sister Sara. 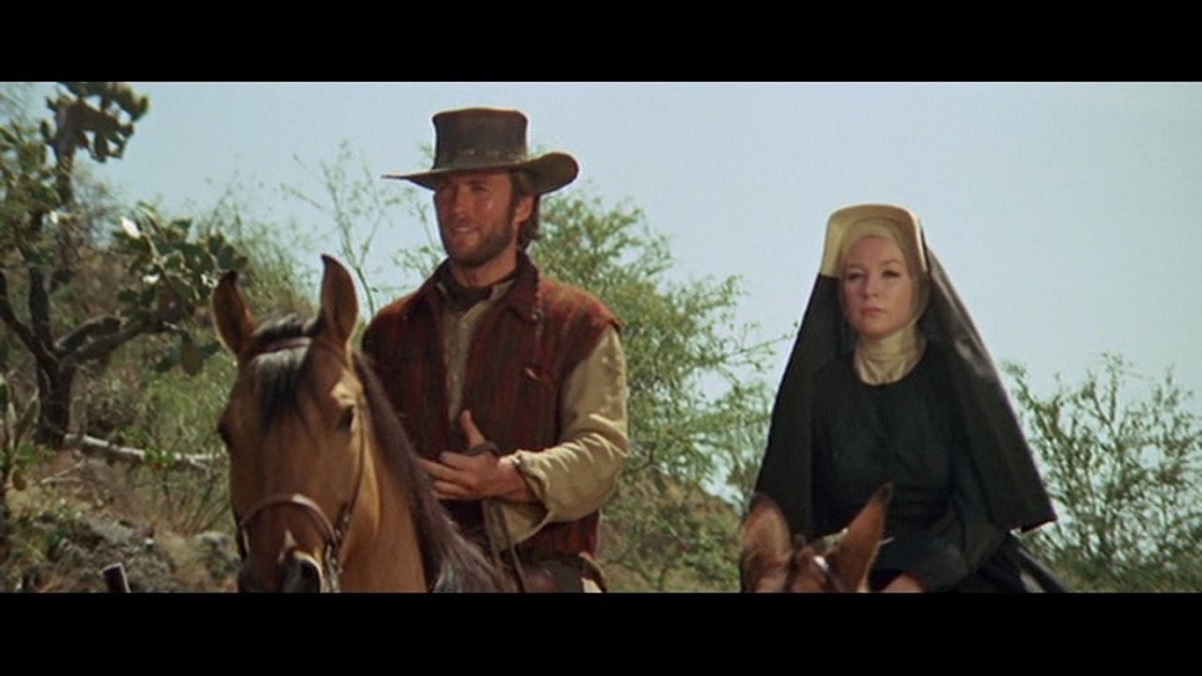 One of the hallmarks of the Italian western boom is the idea of the supremely capable antihero who eventually becomes a true hero. In the Dollars trilogy, Eastwood’s Man with No Name acts as a trickster without scruples who merely wants a massive payday. As each movie progresses, however, his motives become more noble. The innocent lives the villains menace prove more valuable than gold. Mostly.

As the cycle progressed in Italy, filmmakers began to set their films during the Mexican Revolution. The narratives began to focus on an American or European mercenary who eventually teams up with a humble peasant or bandit-turned-freedom fighter. Both Italy and Spain, you’ll remember, had been fascist for quite a long time; as young people of that era came of age and began making films, they would use the western as a way to exorcise those 1930s and ’40s fascist demons.

Two Mules for Sister Sara doesn’t have that same personal political baggage attached, but it does use the same basic set-up of filmmakers like Sergio Corbucci and Sergio Sollima. Sister Sara is also much more concerned with the personal relationship between its male and female leads. Romance is almost entirely absent from most Italian westerns. But something that definitely helps Sister Sara feel more Italian is the incredible score from composer Ennio Morricone. It’s easily one of his best, using the mules themselves—our heroes’ travel conveyance—as a motif for the percussive music.

Following Two Mules for Sister Sara, Eastwood made a number of really intriguing films, including the Southern Gothic  The Beguiled for director Don Siegel and his own directorial debut  Play Misty for Me (both also out on Blu-ray from Kino). In 1972, Eastwood would again make a western, this time for The Great Escape and The Magnificent Seven director John Sturges. While a lesser film in most ways, Joe Kidd seems—at least according to author and audio commentator Alex Cox—to have its roots in one of the best spaghetti westerns ever made.

The aforementioned Sergio Corbucci was the second best director of Italian westerns, following Leone. This much is pointed out in Once Upon a Time…in Hollywood. Corbucci’s Django remains one of the most influential films of the era; his later revolutionary westerns, The Mercenary and Companeros, are rip-roaring, high-action fun. But it’s his 1968 film Il grande silenzio (The Great Silence) which is his masterpiece. 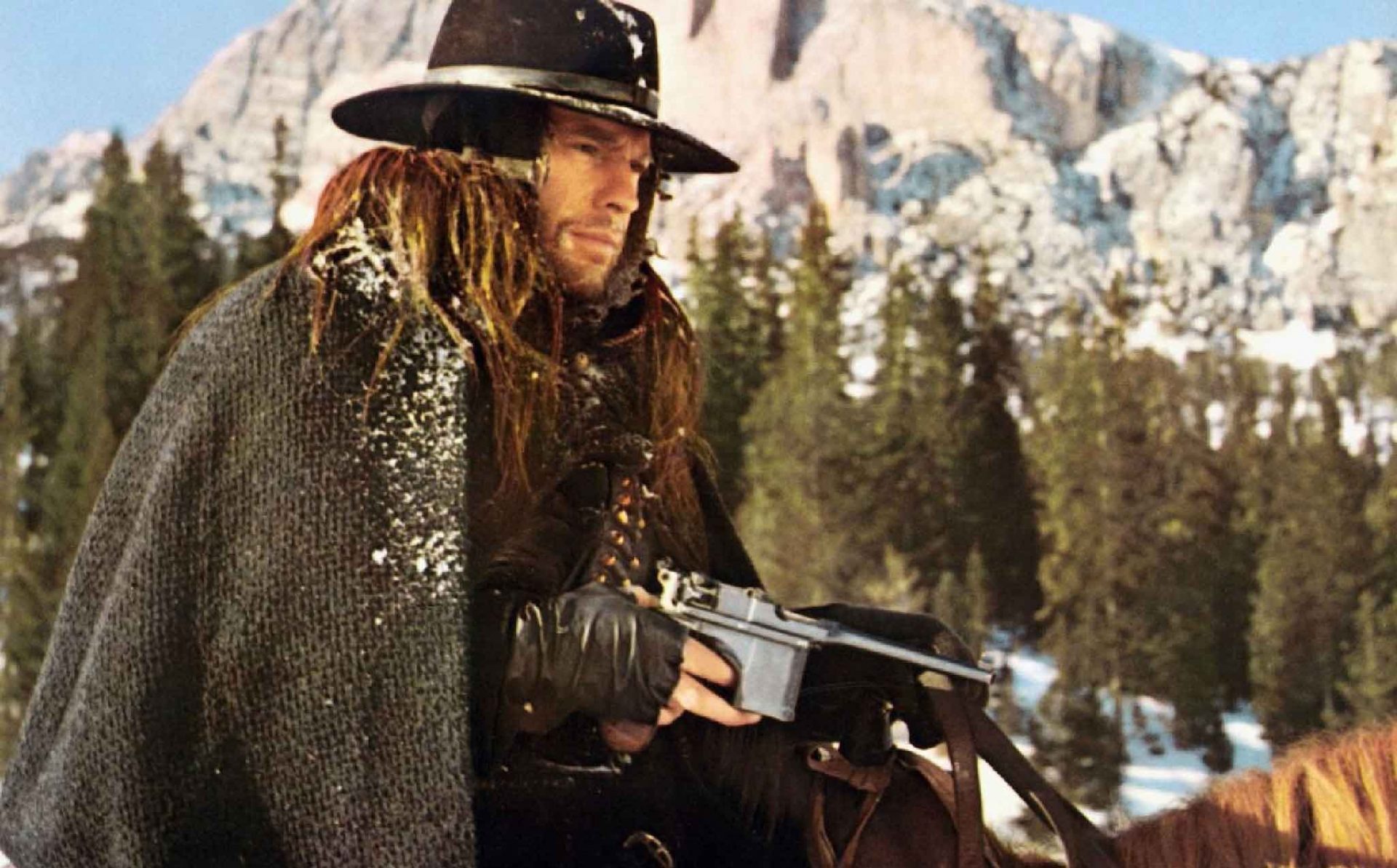 That movie features a bounty hunter called Silence (Jean-Louis Trintignant) who only hunts other bounty hunters. Following an attack as a child that left his family dead and him unable to speak, Silence takes it upon himself to defend a peaceful mountain community in Utah from a greedy landowner who has dispatched a particularly nasty band of bounty hunters to drive the people from their land. The lead bad bounty hunter, Loco (Klaus Kinski), never kills anyone unless they draw first. You know, to keep it legal. Which is exactly the method Silence uses. So you can imagine the tension as neither man will kill the other one.

The Great Silence is one of the bleakest westerns ever made, and not least because of its striking snow-filled setting. According to Cox on Joe Kidd‘s commentary track, Eastwood had been interested in remaking the film in English, but that never materialized. Nevertheless, aesthetic aspects of the film show up in Joe Kidd without anything like the deep moral quandary and themes at the center. 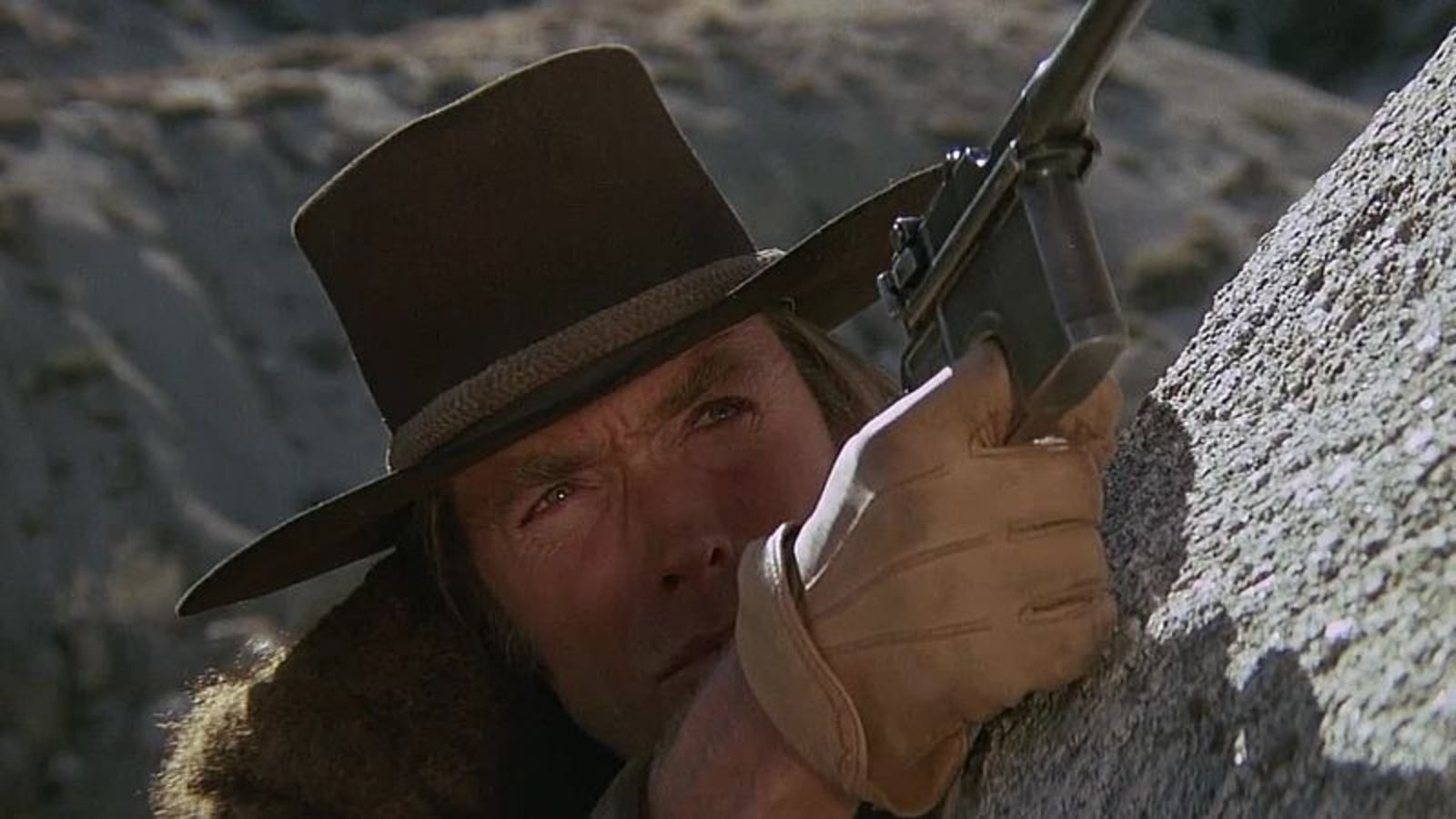 Eastwood’s titular Joe Kidd is a former bounty hunter whom a greedy land baron (Robert Duvall) hires to track down a Mexican revolutionary (John Saxon) who has been preaching land reform. The setting is a mountain town, not quite as snowy as Silence but definitely going that way. Eastwood wears a flat, wide-brimmed hat, a scarf, and carries a machine pistol rather than a standard revolver. All of these are exactly the costuming of Silence. But Joe Kidd is just a guy, without much in the way of a backstory or ulterior motives. There’s some good action, but it’s a pale imitation (literally) of a much better Italian film.

However, it was Eastwood himself who’d bring everything together. He’d direct a movie that at once owes its whole aesthetic and tone to the Italian western, but is unquestionably American. High Plains Drifter is the very definition of a Gothic Western, as much about the supernatural (perhaps) than about gunplay. It was the second film he directed following Play Misty for Me and his first western. It’s a mean-spirited revenge story without a single truly redeemable character among them. 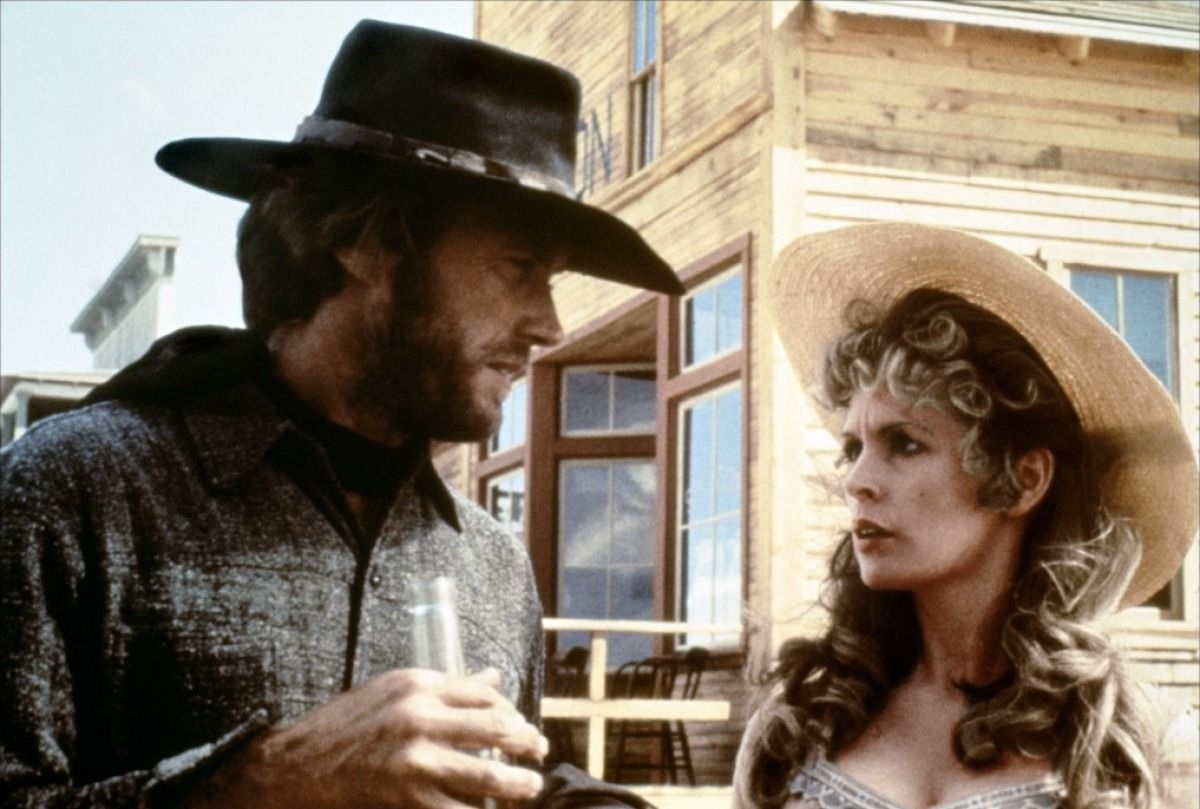 Eastwood plays an unnamed gunfighter, the titular drifter, who arrives in a small frontier mining town. Three tough men immediately start harassing him, and he kills them easily. The sheriff then offers him a job, which he turns down. Seems those men he killed were the town’s hired protection from a trio of outlaws who are just about to get out of prison. Those outlaws brutally murdered the town’s former sheriff; the stranger learns the townsfolk hired the outlaws specifically to kill the sheriff because their mine is secretly on government land. They then sold out the criminals and fear retribution. The stranger takes the job to “protect” the town from the baddies, but he has his own revenge scheme at work.

So, there are a number of interesting themes at work in High Plains Drifter. A lot of ink as been spent over the years about the nature of Eastwood’s character. Is he the brother of the slain sheriff? The man’s ghost? Just some avenging wraith? It’s never fully clear, nor does it truly matter. What does matter is the unconventional filmmaking techniques Eastwood employs, from handheld camera to frenetic editing to extreme angles. This might also be the least heroic of all of Eastwood’s western “heroes,” which is a very Euro-western idea. But one of the first things he does in the movie is sexually assault a woman; narratively it illustrates how the town is made up of cowards who stand by and watch travesties happen. But it smacks as a needlessly brutal moment, even more so as viewed in 2020.

All three of these movies point to the revising of the American western that began in the wake of the Italian western boom. While he apparently never loved working on the three movies for Sergio Leone, Eastwood has always acknowledged his influence on his own directing. These three films feel right on the cusp of New American Cinema, with its grittiness and stronger content, but they needed a push from Italy to get there.