Fans have been debating how the X-Men could join the MCU since long before Disney purchased Fox Entertainment. Now that their arrival feels inevitable, speculation turns to when they will appear. But it’s possible we already have the answer to both questions, as WandaVision might be hiding mutants in plain sight. And we’re not even talking about the “recast” Quicksilver. Both Wanda and Monica Rambeau might be mutants, without either realizing it themselves. 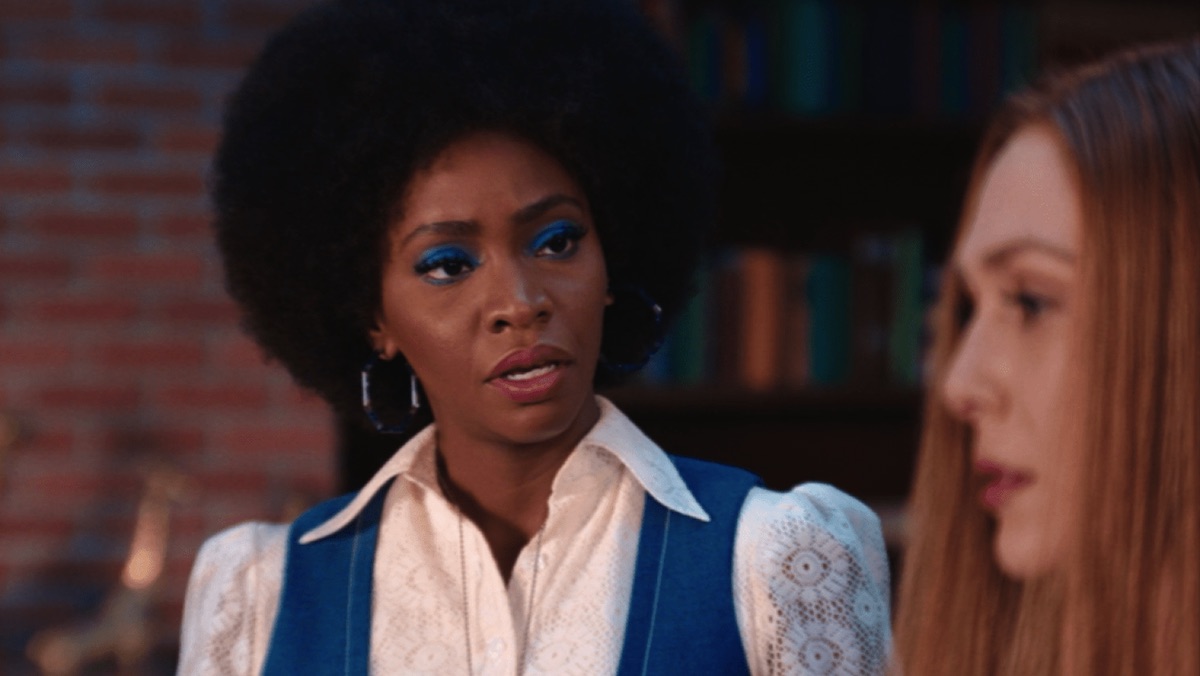 The Real Origin of Wanda’s Powers

In late 2018, after the Disney/Fox merger, the Marvel Studios Visual Dictionary seemingly changed what we knew about Wanda Maximoff’s abilities. Avengers: Age of Ultron indicated that Wanda and her brother Pietro (played by Aaron Taylor-Johnson) gained their incredible powers from exposure to the Mind Stone. But the official Visual Dictionary, originally noted by Screenrant, calls into question exactly how the infinity stone worked on the Maximoff twins. From the book, emphasis ours:

“She may be called Scarlet Witch, but Wanda’s powers aren’t derived from the occult. Whether it altered her or merely unlocked something latent inside Wanda, the Infinity Stone on Loki’s scepter bestowed incredible powers of the mind. Wanda’s internal neuro-electric interface allows her to conjure blasts of red telekinetic energy. She can also use this energy to create barriers, levitate and move objects; to communicate and read thoughts by telepathy; and even to manipulate the minds of others.”

According to Marvel itself, it’s possible the Mind Stone didn’t give Wanda new powers so much as unlock hidden ones. If it did unleash dormant abilities within her, that would mean Wanda is a latent mutant. As would be her deceased MCU brother. They may have both possessed the X-gene. In the world of X-Men comics, that gene usually manifests at puberty. But the MCU has never been shy about revising its source material.

In 2018, this pseudo-retcon of Wanda’s powers seemed like a possible foundation for the MCU to introduce mutants to the franchise. It would (retroactively) explain why there were so few of them all these years. Not many humans had direct exposure to infinity stones. And only a very small percentage of people would have had latent powers that could be released. With so few mutants around, they easily could have remained hidden without stretching credulity. But with the infinity stones being used for three separate snaps on Earth, nuking the planet in gamma rays every time, you could easily explain why so many would arrive so suddenly.

We don’t need to look ahead to predict when we’ll meet another mutant, however. Because WandaVision has provided enough clues pointing to already one having arrived: Monica Rambeau. 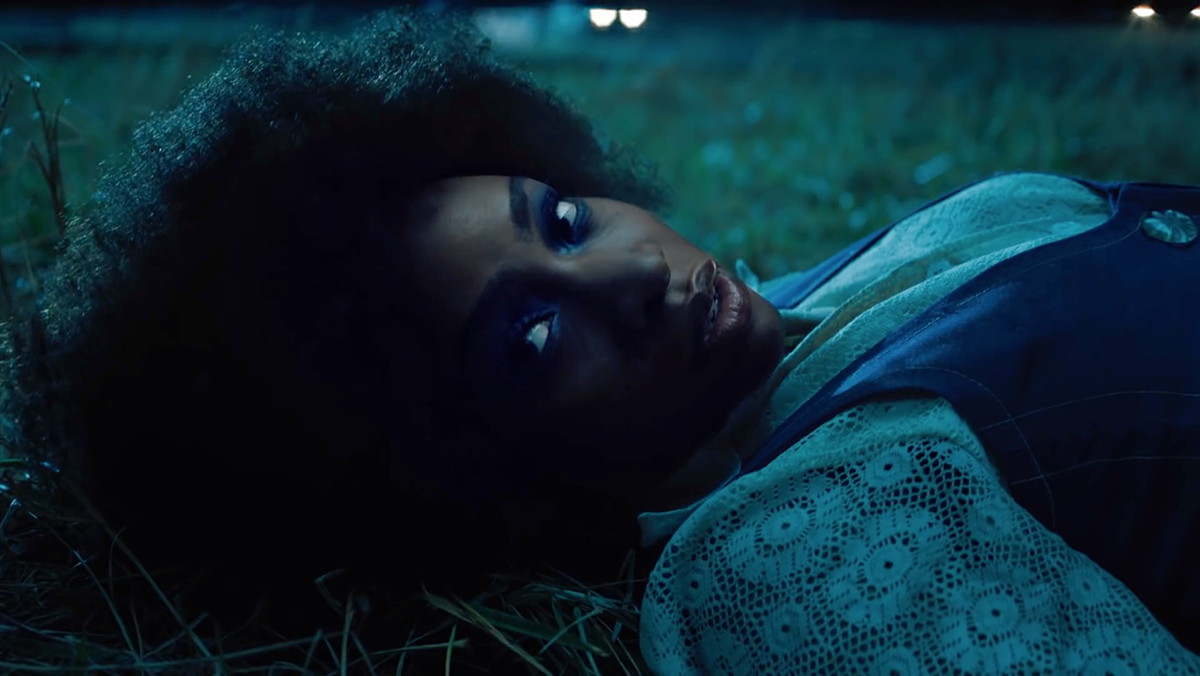 In the comics, Monica Rambeau gained superpowers after exposure to extra-dimensional energy. For a time she was the Avenger Captain Marvel. Eventually she became the hero Photon, which, as seen in a S.W.O.R.D. plaque on WandaVision, is her late mother’s nickname in the MCU. Monica possessed incredible abilities in the comics. She could transform into, and control, any form of energy within the electromagnetic spectrum. That included gamma rays, X-rays, ultraviolet radiation, visible light, electricity, infrared radiation, microwaves, and radio waves.

A version of those abilities have been hinted at on WandaVision. First, Monica was the only one who could see the energy field containing Wanda’s Westview. She could also touch it. We got another major clue when she was expelled from the Hex. She was given an MRI, but the results were completely blank. It was as though the machine, which uses radio frequency pulses and measures energy, couldn’t work on her. Nor would it on someone with her powers. 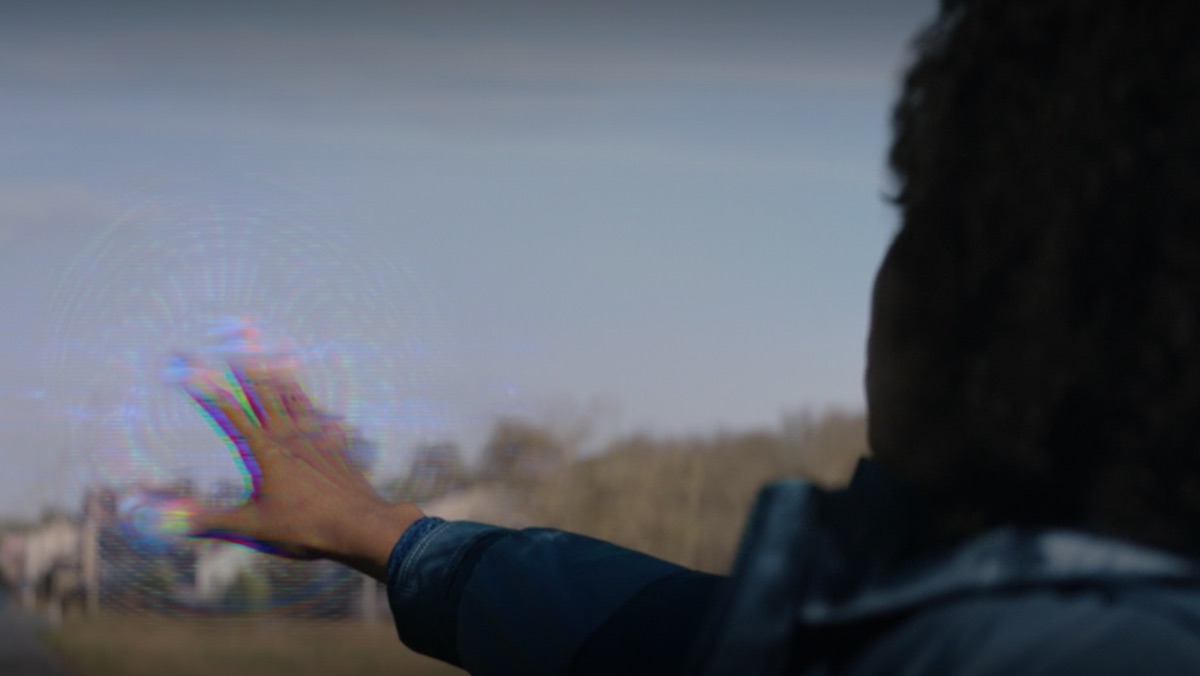 Monica traveled to space for S.W.O.R.D. numerous times before the Snap. It’s possible she gained powers the same way she did in the comics. But she also was a victim of Thanos, and then returned with the Blip. Those who were dusted and then undusted might very well be—at least some of—the MCU’s mutants. But there’s a third possibility for where Monica’s abilities come from. And it ties her to WandaVision‘s star.

As a child, Monica was close with someone who, like Wanda Maximoff, gained her abilities from exposure to an infinity stone: Carol Danvers. The MCU’s Captain Marvel, the only Avenger who rivals Wanda in terms of superhuman abilities, gained her powers from the Space Stone. Not only does that mean Carol Danvers might be a latent mutant, it opens up the possibility Monica Rambeau is too. Brie Larson’s Carol is basically a walking infinity stone herself. Years of being around Carol might have unleashed Monica’s powers, without Monica even realizing she has them.

This would also explain one of the show’s most interesting questions: why did Wanda trust Monica to enter the Hex at all? 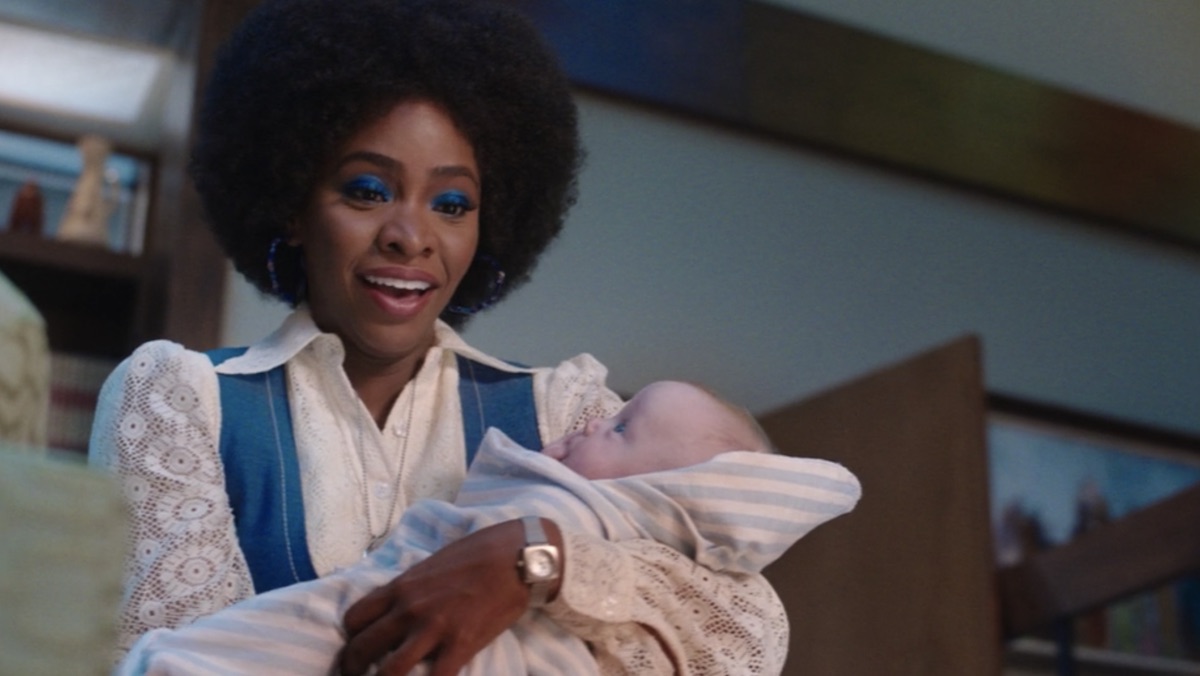 The Hex Welcomes a Guest

When Monica Rambeau first arrived on the scene outside of Westview, she asked Agent Woo, “Why haven’t you gone inside to investigate?”

“‘Cause it doesn’t want me to,” he said. “You can feel it too, can’t you? Nobody’s supposed to go in.” Yet, just moments later, the Hex pulled Monica inside. And once there she became a recurring character in Wanda’s sitcom world, which is full of thousands of unseen people. Yet, Wanda trusted “Geraldine” enough to not only welcome the outsider into her inner circle, but to let “Geraldine” deliver one of her babies. That connection continued even when when Wanda expelled Monica for mentioning Ultron and Pietro’s death. Wanda made sure “Geraldine” landed safely. 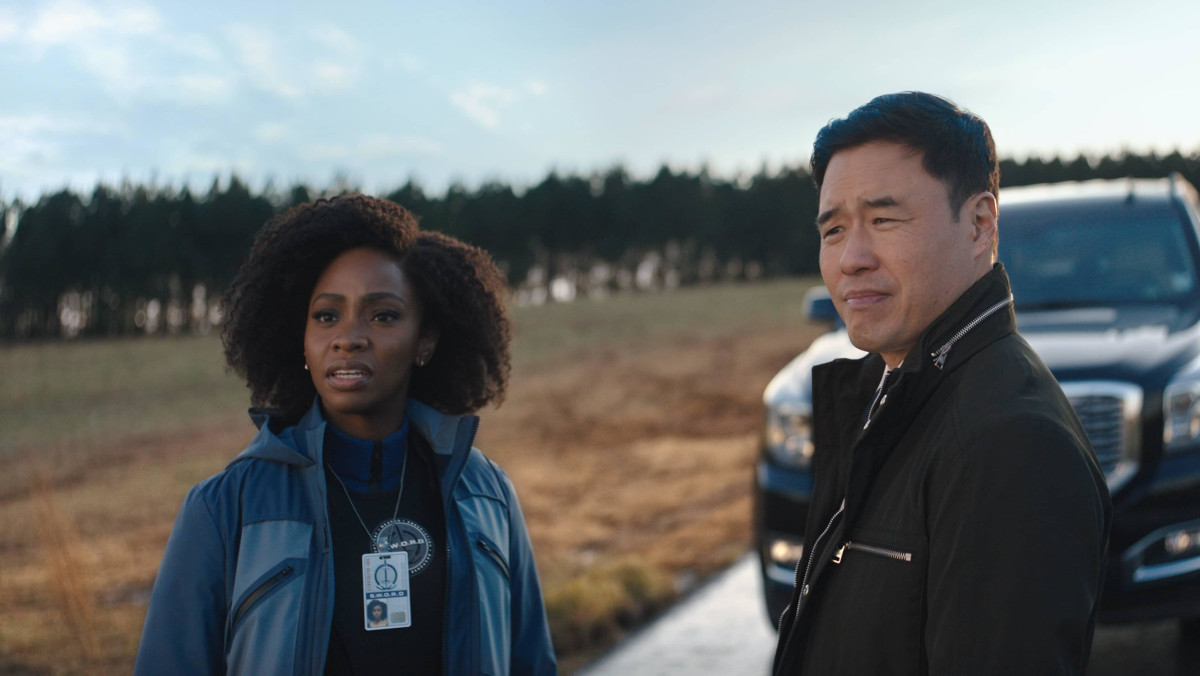 Monica knows something unexplained is happening between them. When Wanda left her bubble to threaten S.W.O.R.D., she was angry to see Monica still there. But Captain Rambeau confidently walked towards Wanda and said, “I didn’t know the drones were armed. But you know that, don’t you? A town full of civilians, and you, a telepath, brought a S.W.O.R.D. agent into your home. You trusted me to help deliver your babies. On some level, Wanda, you know I’m an ally. I want to help you.”

Agent Woo is a good person who wants to help Wanda too. But Wanda didn’t allow him inside the Hex. So why Monica? Maybe because Wanda knows or senses something no one does—they are both mutants. Each of them had latent abilities unlocked. And those powers are terrifying to the world that felt the Sokovia Accords were necessary. It’s the world that exists outside of this sitcom bubble, where pain and suffering and loss have haunted Wanda her whole life. It’s the world where Hydra experiments on kids and Stark Industries bombs create kids. That world is not a safe place for people like Wanda. 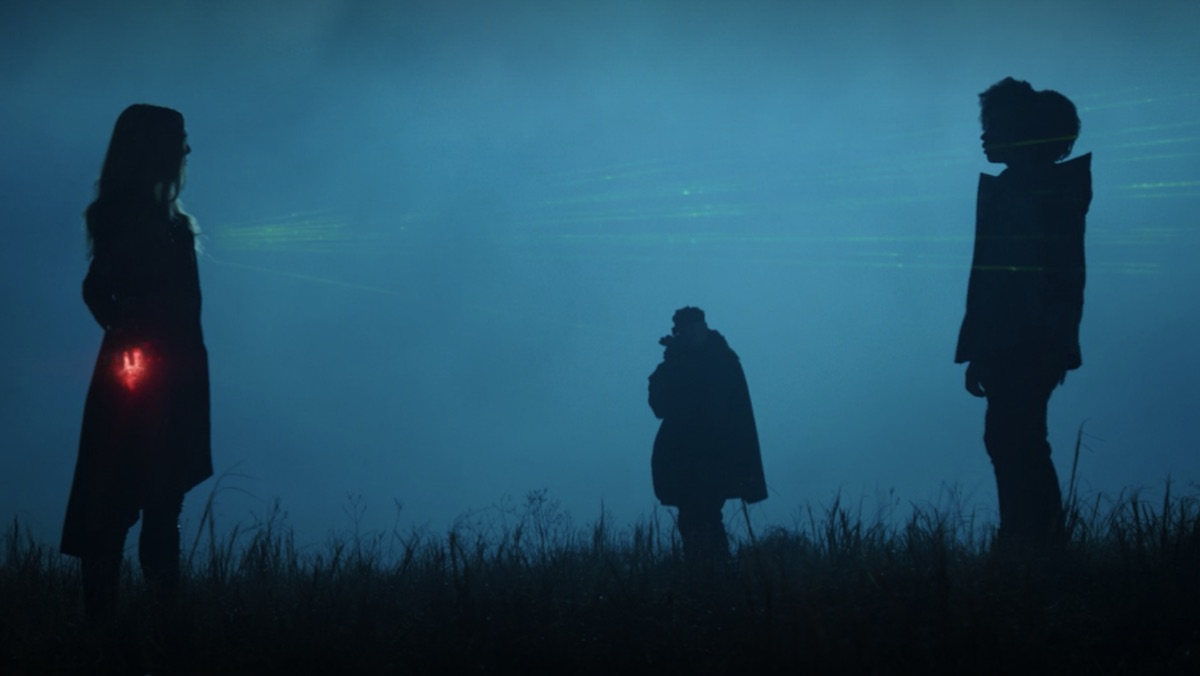 That’s why Wanda let Monica in. Not just so Monica could help her, but so Wanda could protect Monica. Because they are more alike than anyone realizes, including everyone who has been wondering “how” and “when” mutants will join the MCU. They might already be the stars of WandaVision.