Twitter To Allow Users to Control Who Replies to Their Tweets

Twitter has just announced at this year’s CES event in Las Vegas that it will soon allow users of the popular social media platform to modulate who’s able to reply to their tweets. The content control change is the latest from the company, as it attempts to position itself as an online destination for harassment-free discourse. But while the change may help to limit vitriolic interactions, many Twitter users are already pointing to potential misuses of the new capability.

According to Mashable senior tech reporter, Karissa Bell, “an upcoming [Twitter] feature will let you control who can reply to your tweet as you compose it…” and will also provide “the ability to limit replies to followers, people who are mentioned in the tweet, or no replies at all[.]” Bell reported the change via a series of tweets, adding that “This is something that should address people who feel they have to make their accounts private because their tweets are hijacked by trolls/swarms….”

New from Twitter: an upcoming feature will let you control who can reply to your tweet as you compose it, there will be the ability to limit replies to followers, people who are mentioned in the tweet, or no replies at all

Although the company has already given users the ability to hide replies, it can be a tedious task, as replies a user wants to hide must be hidden one at a time. These new changes, on the other hand, allow users to decide who’s able to reply to their tweet prior to posting it, meaning a lot less work for those trying to regulate their comments. Tweets that have had one of the three limiting options turned on will still be able to be quote tweeted, however. Some users have also pointed out the fact that people could still screenshot and post the modulated tweets as well, which could lead to comment threads that are completely out of an author’s control. 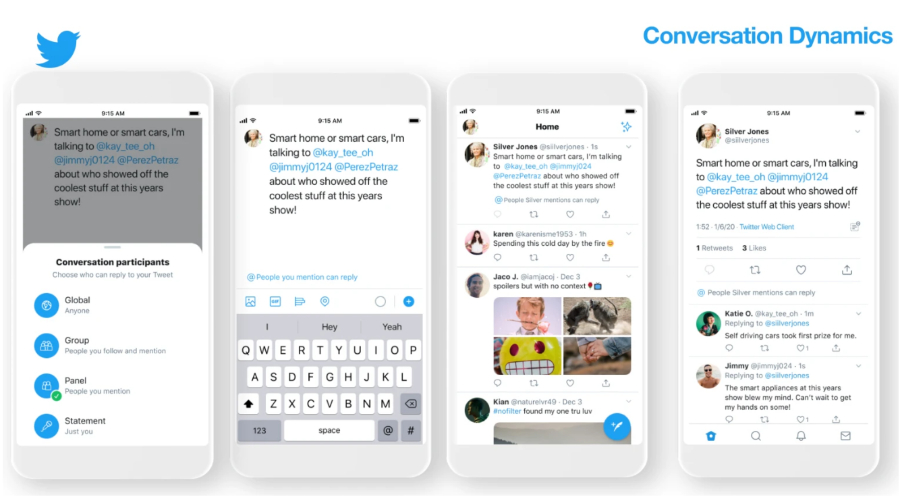 Reclaim The Net reports that the three new options for controlling replies will be labeled “Panel,” “Group,” and “Statement.” Panel will enable users to limit replies to only those mentioned in the tweet (or who’ve been “chosen,” whatever that means); Group will allow users mentioned, as well as users the author of the tweet follows, to reply; Statement will be the option that completely disables comments. The default setting will be “Global,” which will allow anyone to reply.

I’ve also seen multiple other women who’ve been targeted for harassment ask for the ability to have more control over who can reply in the first place.

So just to answer your question, “women harassed on Twitter” are the ones “asking for this dumb shit” ?

Suzanne Xie, Twitter’s director of product for conversations, said during the announcement that the change will allow Twitter “to create a whole new format for conversation that didn’t exist before,” and “give [authors of tweets] a way to control the conversation space….” But the new settings are still only in the testing phase, and will be for some months to come. Kayvon Beykpour, Twitter’s product lead, referred to the testing of the changes as an “experiment” during the presentation, and Bell noted in her Mashable article covering the news that the company will be “watching closely and looking for feedback before it decides whether to make [the changes] available more broadly.”

….this is bad, right? Allowing people to hide replies that may or may not share important information so you can “control” your narrative?
YIKES twitter pic.twitter.com/9H0FSx4P89

Twitter users, especially those who’ve been bullied off the platform, will likely welcome these changes, although it’s possible powerful entities—such as large corporations or popular public figures—may use them to make themselves more insulated and therefore less capable of being criticized. It’s also been noted that these changes could effectively eliminate the phenomenon of “ratioing,” whereby a tweet receives far more negative commentary than likes or retweets. But even this potential benefit is being debated by Twitter’s user base, as it attempts to keep up with new policies from a company that seems to continuously put out one metaphorical fire while inevitably igniting another.

What do you think about these forthcoming Twitter reply controls? Give us your (harassment-free) opinions in the comments!