Watch Tiny Tesla CYBERTRUCK Duke It out with Ford F-150

When Elon Musk unveiled Tesla’s Cybertruck in November of last year, he showed a video demonstrating the angular, steel Martian car winning in a tug of war battle with a Ford F-150. In the days following the unveil, Tesla and Ford seemed to develop an agreement that they would do an “apples to apples” real-world tug of war, but, sadly, the competition never came to fruition. Now, however, thanks to engineer and YouTuber, the Hacksmith, we finally get to witness the competition, but with one tiny twist: the use of a half-scale Cybertruck, built from scratch, in place of the real thing.

The Hacksmith released his first video showcasing the build process for his team’s half-scale Cybertruck in December of last year, but didn’t post the final video in the series until last week. That’s in part because, despite its size, the half-scale Cybertruck required extensive engineering solutions to make it look, and work, like a real Cybertruck. There was also a lot of Tesla’s tech that the Hacksmith and company wanted to insert into the mini Cybertruck—at least in a nominal way, anyway.

To give you some sense of how ridiculous the half-scale Cybertruck is, a list of its features includes, but is not limited to: an iPad dash that’s able to control various functions, including the vehicle’s LED lights; a charging port that works with real electric vehicle chargers; a marble dashboard; a tri-motor powertrain with a ridiculous amount of torque, and, of course, some “Tesla armor glass.” In total, the Hacksmith says that the project would’ve cost $50,000 if labor costs had been realized and discounts had not been given.

Better truck than an F-150, faster than a Porsche 911. Order Cybertruck online at https://t.co/hltT8dg2NO 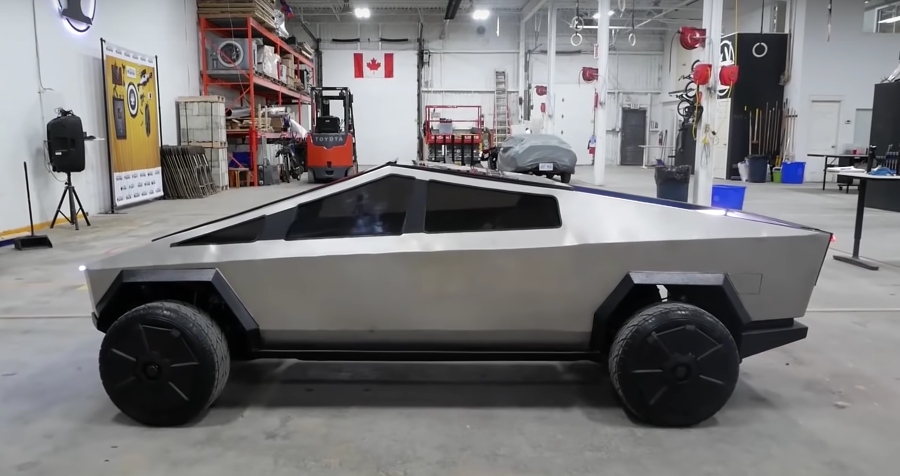 A profile view of the half-scale Cybertruck. The Hacksmith

As far as future plans for the half-scale Cybertruck, it sounds like the half-scale sky’s the limit. The Hacksmith says in his video that he and his team may upgrade the build with more of the accoutrements that will be available in the real Cybertruck, including self-driving capabilities or the ability to be remotely operated. There’s also, according to the tag at the end of the video (beginning around 8:34), a lot of openness toward real-world testing of the miniature truck. Which is good, because we’d like to order a full fleet of them when they’re finally street legal.

What do you think about this half-scale Cybertruck? Do you think it was a fair battle between the miniature Tesla and the Ford F-150, or was all that weight in the former’s bed technically cheating? Give us your full-scale thoughts in the comments!