Who Are the New Members of THE SUICIDE SQUAD? - Nerdist

Who Are the New Members of THE SUICIDE SQUAD?

One of the most fun-looking movies previewed at DC FanDome was James Gunn’s reboot of The Suicide Squad. The special panel revealed just who Gunn’s doomed cadre of (mostly) washed-up DC Comics villains are going to be this time. Of course, we are already familiar with Harley Quinn (Margo Robbie), Captain Boomerang (Jai Courtney), Rick Flag (Joel Kinnaman), and Viola Davis as Amanda Waller. But just who the heck is everyone else playing?

Don’t worry, we’ve got you covered. Here’s our handy-dandy guide to which deep-cut DC character is getting to go on the mission this time. We’ve even included their first comic book appearance. Just in case you have an old issue from the quarter bins that might suddenly skyrocket in value once these guys become big time movie stars. You never know!

Almost everyone was expecting Idris Elba to be playing a more high-profile DC Comics character like Vigilante or Bronze Tiger. But this A-list actor is playing a strictly D-list Superman baddie. Bloodsport was a knock-off of Rambo and Punisher tropes popular in the ’80s. Obsessed with the Vietnam war, Robert DuBois is somehow tricked by Lex Luthor into blaming the Man of Steel for his grievances. He then attacks Superman with Kryptonite bullets. His criminal career is short lived, and he only made a couple of appearances in the comics.

This extremely silly Silver Age villain once plagued Batman and Robin, under the even less threatening name of Mr. Polka Dot. Abner Krill’s whole shtick is his suit that is covered in spots that can be peeled off and turned into different weapons. The dots can grow big and become anything from flying saucers to teleportation devices. Polka Dot Man’s creator is Batman co-creator Bill Finger, proving that everyone can have an off day. 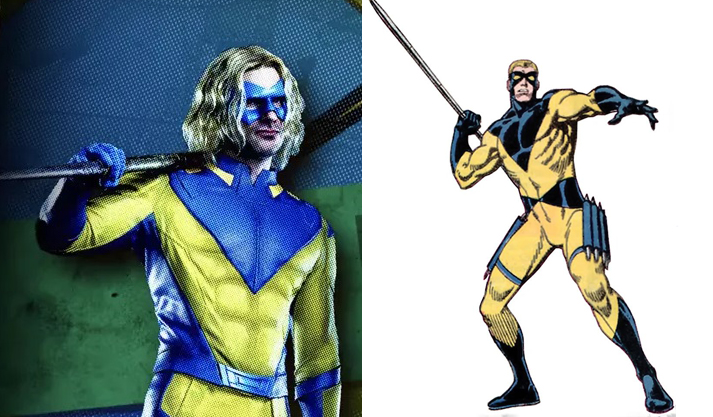 Probably not anyone’s first choice for the Green Lantern villain they expected to see on movie screens first after Sinestro. But here we are. Javelin has no known real name. His whole claim to fame is as a former Olympic athlete who decides one day to use his skills throwing javelins to become a criminal. He keeps seemingly dying, but whenever DC needs big group shots of villains, he pops up again. Maybe there’s more than one?

Booster Gold has yet to make a cinematic appearance in anything. But the low-rent bad guy he fought in his first issue is making it to movie screens before he does. Blackguard’s real name is Richard Hertz. (Yes, he’s “Dick Hertz.”) He wears a power suit given to him by a criminal cadre called the 1,000 that allows for him to generate a mace and shield of pure energy. Swiftly defeated by Booster Gold, soon he finds himself drafted into the Suicide Squad.  He meets his end getting decapitated on a mission. Here’s hoping Pete Davidson has as memorable an on-screen ending. 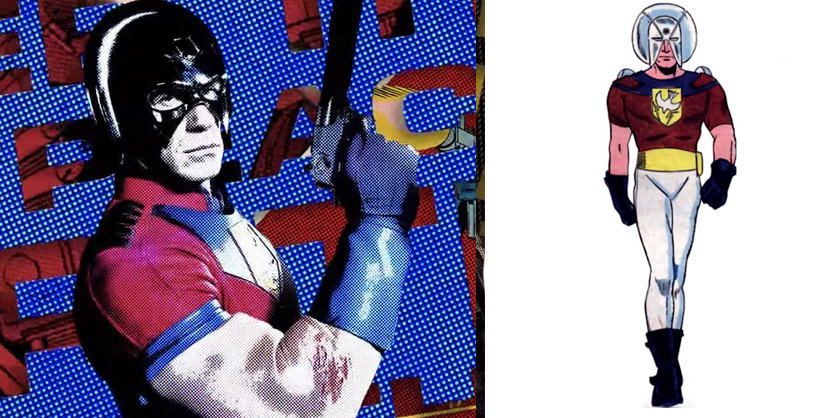 John Cena’s character has two distinctions setting him apart from the other Squad members. First, he’s a hero in the comics and not a villain. Secondly, he’s not even originally a DC character. Peacemaker was first created in the pages of Charlton Comics, along with Blue Beetle and the Question. DC eventually acquired these characters. Christopher Smith is “a soldier who loves peace so much, he’s willing to kill for it.” He even wears the Dove of Peace as his insignia. He’s maybe most famous today for being the template for Watchmen’s the Comedian.

The alien despot Mongul is one of the few Superman villains that can go toe-to-toe with the Last Son of Krypton in a physical fight. The big yellow behemoth rules the planet War World, where he pits champions against each other in gladiatorial games. But this is not Mongul in The Suicide Squad. This is Mongal (get it? ‘Cause she’s a gal?) She and her twin brother Mongul the Younger were the heirs to daddy’s throne. She made a few appearances in the pages of Superman, before her brother killed her. But she’s making it to movie stardom before either her pops or her brother, so Mongal wins in the end. 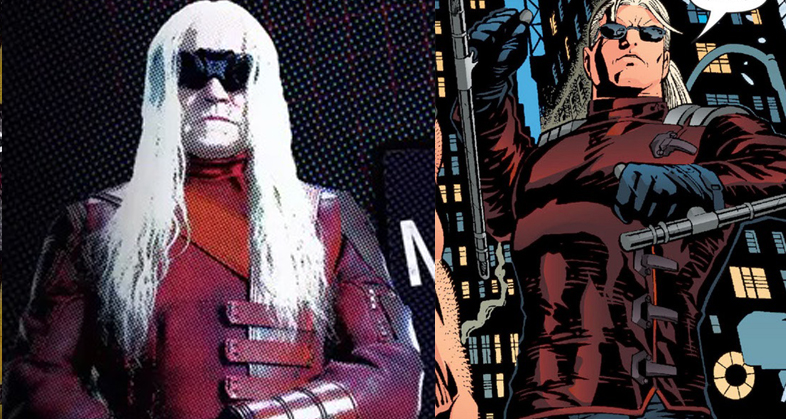 James Gunn favorite Michael Rooker is playing Brian Durlin, an entitled rich kid who wants to be a vigilante like Batman. Taking the name Savant, he moved to Gotham in hopes of becoming a crime fighter. Then he met Batman, who told him he sucked at the job and to quit. So he parlayed whatever fighting and computer skills he had into a profitable blackmailing business. In the comics, he famously tortured Black Canary to find out Batman’s secret identity. For that alone, we hope he dies a painful and funny death in The Suicide Squad.

John Monroe was an unpopular and unlikable student at Stanford University. Everyone there from students to teachers referred to him as a weasel. As one does, he chose to take his revenge on all those who mocked him. This included Dr. Martin Stein, the man who is one half of the hero Firestorm. Monroe then decides to dress up like a weasel and murder people. Eventually he even got super strength and deadly claws, but ended up in prison anyway. During his Task Force X tenure, he winds up killing another member. The he gets put out of his misery.

This once D-list villain who fought the Conner Kent version of Superboy in the ’90s has had quite a resurgence of late. First he popped up in The Flash TV series, and later the Harley Quinn animated show. Soon another version of him will join the Suicide Squad. Nanaue is the hybrid son of Chondrakha the God of all Sharks, and a human woman. Becoming a serial killer in Hawaii, the Boy of Steel ultimately defeated him. He later went on to become a Suicide Squad member. DC’s original half human/half shark villain “The Shark” is likely very mad due to getting totally upstaged. 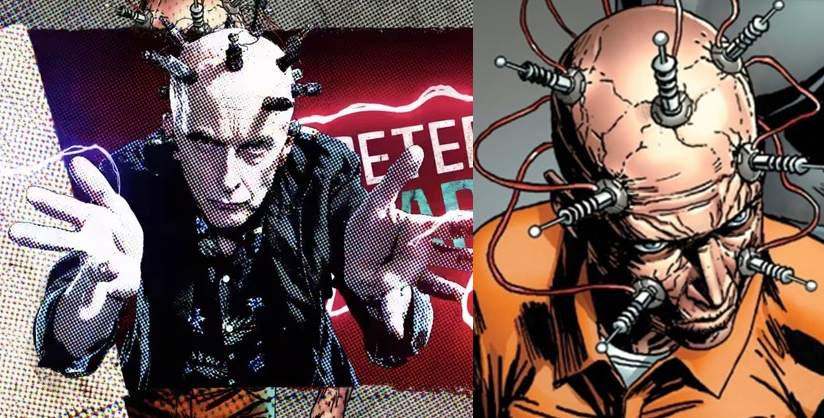 Probably the most powerful and actually not silly villain in the Squad is Clifford DeVoe, a,k.a. The Thinker. He’s a powerful telepath, and has been a thorn in the side of the Flash since the ’40s. Played by Peter Capaldi in The Suicide Squad, the character was actually the “Big Bad” of the fourth season of The Flash. Projecting mental energy using his so-called “thinking cap,” this later morphed into telekenisis and mind control. In the comics the Weasel killed him on a Squad mission. Will he meet a similar fate on screen? Only time will tell. 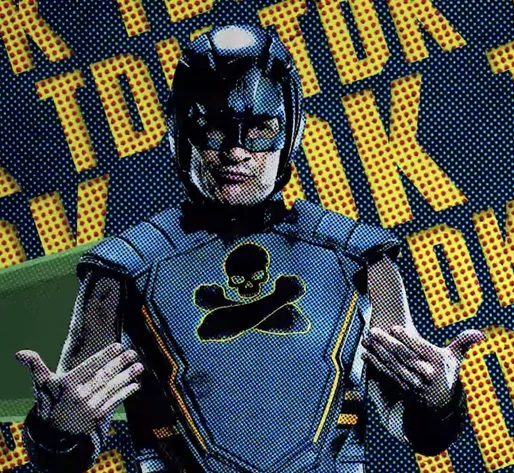 In the comics there is no DC villain named “TDK.” But the popular theory going around is that Nathan Fillion’s character isn’t totally made up for the movies. TDK is rumored to stand for “The Detachable Kid,” a character who can take his limbs off and use them as weapons. This has basis in actual DC Comics history. The Legion of Super-Heroes once had an applicant named “ Arm-Fall-Off-Boy.” Could TDK be his 21st century ancestor?

In the comics, Otis Flannegan was a once an actual rat-catcher in the sewers of Gotham City. He developed a special ability to communicate with and train rats, whom he used to plague the city with a crime spree. This put him at odds with the Bat-family several times. The movie is introducing a female version of the character, but the notion that she is called “Ratcatcher 2” suggests we might see the original in some form too, and maybe she’s his successor.