Enjoy the Ghoulish Prologue of THE MARY SHELLEY CLUB

We love a good slasher movie here at Nerdist, but what about a slasher novel? New York Times-bestselling author Goldy Moldavsky‘s new novel The Mary Shelley Club offers up exactly that. The delightfully demented and twisty YA thriller centers on the titular crew at an elite Manhattan prep school. Rachel Chavez finds herself immediately drawn to the horror-loving teens who seem to find as much solace in the genre as she does.

But there’s a catch: the Mary Shelley Club orchestrates Fear Tests, strange and sometimes dangerous pranks inspired by urban legends and classic horror movie tropes. And, soon, Rachel realizes she’s playing a game that could be as deadly as the movies that she loves so much. 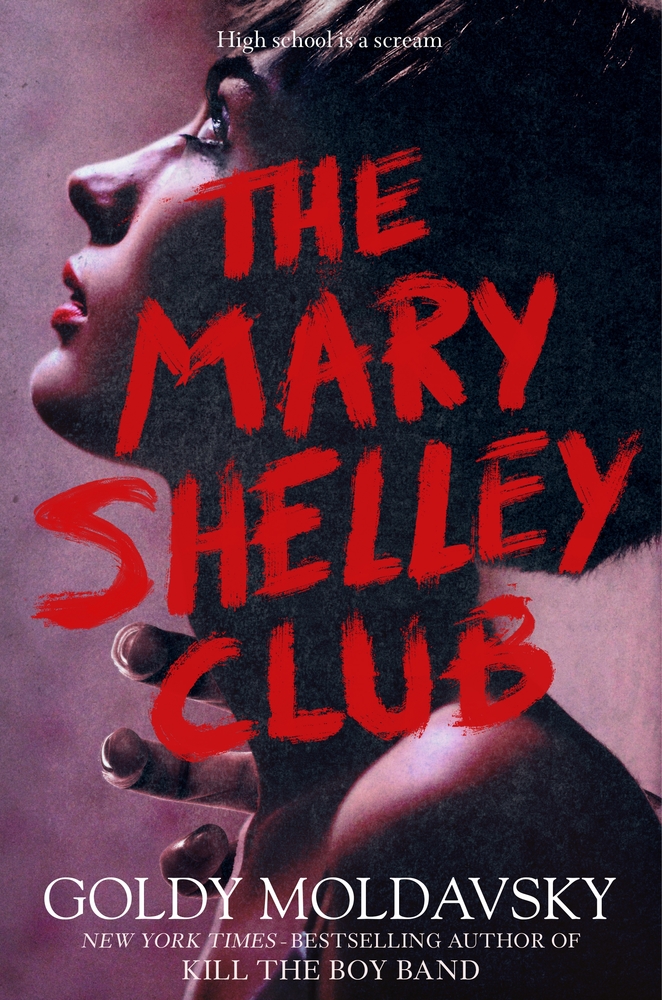 In our exclusive excerpt you can read the prologue of the book which plays as a classic slasher cold open. Addictively written and totally immersive, if you fall in love with this chilling tease then you’ll love The Mary Shelley Club.

RACHEL SAT AT her desk like a pretzel, ankles tucked beneath her, knees up and pressed against the hard edge of the wood. She stared at the wiki for Nellie Bly, the historical figure she was supposed to be writing a paper on, but all the words made her eyes glaze over. It wasn’t that she wasn’t interested in Nellie Bly; Rachel could get behind any badass journalist with a zippy name. But there were just too many distractions around.

Spotify blared the latest Taylor single, and no matter how many times Rachel put down her phone, determined to start reading about Nellie, it would chirp again with a new text from Amy and she had to pick it up. Like now.

i wonder what he’s doing rn. we should go to his house and SPY

i’m not about to stalk, Rachel texted back, and put down her phone for real this time.

But even as she read Nellie’s truly interesting bio, Rachel’s mind kept wandering.

She wasn’t going to spy but . . .  what was he doing right now? Was he out with friends, or playing video games, or studiously doing homework like she was supposed to be? Whatever he was up to, Rachel was sure he was definitely not thinking about her. He barely knew she existed. Well, except for the fact that they’d actually had, like, a legitimate conversation this morning. It didn’t last more than three minutes, but it was real. And there were smiles. Mutual smileage was had.

Rachel grinned just thinking about it. And even though she was alone, she buried her dopey, blushing face in her hands.

A string of new messages furiously beeped from her phone and Rachel picked it up, Nellie Bly all but forgotten.

Rachel groaned and hurled the phone onto her bed, then shoved it under her pillow. She did not want to have his bebees, and she seriously never should’ve told Amy about her crush. Back to Nellie. Rachel sat up straight, readjusting the laptop, like getting the right 0— screen angle was the trick.

As Rachel ignored her phone even harder, she caught sight of someone outside. Her desk sat flush against the window, where she could see the front lawn. It wasn’t unusual to spot someone walking around, but it was past nine in the suburbs. Nobody was out past nine.

That wasn’t what made Rachel pause, though. It was that this person had stopped in front of her house, still as a statue. He wore dark pants and a black parka, and although she couldn’t see his face very well, it seemed unusually pale.

Goosebumps crawled up Rachel’s arms, but she wasn’t sure why. The logical part of her brain kept telling her that it was just a person on the street—a  neighbor, maybe— nothing more.

A muffled dinging came from under her pillow. Rachel grabbed her phone, glancing down at Amy’s latest text.

Out the window, the man had gone. Rachel breathed a sigh of relief.

As Taylor’s voice faded and Rachel’s phone finally stopped beeping, she decided to get back to work. But then she heard another noise. This time, it wasn’t from any of her devices. It came from downstairs.

But that was impossible. She was alone in the house. A new song threatened to start, but Rachel quickly muted the melody. She sat perfectly still, like a puppy anticipating the arrival of a stranger at the door. She waited a bit, ears straining as a long beat of quiet stretched out endlessly.

And then a noise blasted through the room. She startled, nearly falling off her chair at the shrill chirp of a new text. This time Amy had sent just a GIF of a bearded Chris Evans breaking out in a hearty giggle. Rachel would’ve laughed too, but there was that nagging uneasiness that pulled at the hairs on her neck. Actually, given the circumstances, the longer she looked at the GIF—a n infinite loop of explosive, silent laughter— the more it creeped her out.

Right as Rachel was about to text back, she heard the noise again. This time, it was louder and she was sure it was a footstep. Someone had stepped on the creaky spot in the hardwood between the couch and the coffee table.

Rachel took a deep breath. “Mom, is that you?”

Her mom was supposed to be out in the city for a girls’ night with her friends. But she had only left an hour before and she couldn’t be back yet. Maybe she’d turned around, forgotten something.

Rachel clung to this thought even as her hear started pounding. But in the back of her mind she knew she would’ve heard her mom’s car pull into the driveway, heard her dump her ring of keys loudly on the console table, heard her messily toe off her boots as she announced she was home, the way she always did.

Rachel put her phone down and made her way to her door, opening it slowly.

“Mom?” she called out again.

When no answer came, Rachel stepped out of her room and crept down the hall toward the stairs. Her socked feet padded lithely on the carpeted steps until she entered the living room.

Someone was there. It wasn’t her mom.

The man from outside was standing across the room, dressed all in black. Even his hands were gloved. As Rachel stared at his face, she realized now why it had looked so pale before. What she’d thought was flesh was actually a white mask.

Then Rachel caught sight of the other man. He stood by the TV, dressed just like the first. They stared back at her, their faces scarred and rubbery.

The brain does curious things when suddenly presented with something it cannot comprehend. Rachel’s very first thought—a  flash—was to offer the men a  glass of water, like she’d been taught to do for all guests. And then, just as quickly, she understood. These men were not guests.

Rachel’s first impulse was to call for help, but anything that wanted to come spilling out of her got jammed in her throat, frozen along with the rest of her. She felt like she was suddenly sinking in quicksand and any movement would only thrust her deeper into the muck.

Two things happened very quickly and all at once.

One of the men charged out the door, blasting through it like he was swept up by the wind. The second man moved too, but not for the door. He lunged toward Rachel, and just like that she broke free of her paralysis and ran. She thought only of the back door in the kitchen, picturing herself opening it, breaking through to the crisp backyard air, and escaping. In a moment, she didn’t have to picture it. She was in the kitchen, she was reaching for the door, fingertips an inch from the knob.

But then his hand was a vice around her arm. She was caught.

The Mary Shelley Club is on sale on April 13!