The Stinkhorn Mushroom May Be the Grossest Thing on Earth - Nerdist

The Stinkhorn Mushroom May Be the Grossest Thing on Earth

Usually it’s possible to find both the good and bad in things. When it comes to the Phallaceae family of fungi, a.k.a. the stinkhorn mushrooms, however, there is only side to the story, and it is maximally disgusting. Everything from their name to their taste to the way they look is 100% grade-A barf-o-rama. Keep reading for proof of that statement, if you can stomach it.

We first learned of the stinky, bloomin’ mushroom from YouTuber zefrank1’s latest “true facts” video on the Phallacea fungi, which is featured above. The hilarious video, which is also quite disgusting, of course, outlines most of what that stanky stinkhorn life is about, but let’s rehash it real quick because just how repulsive the stinkhorn is as a life form needs to be appreciated on every level. 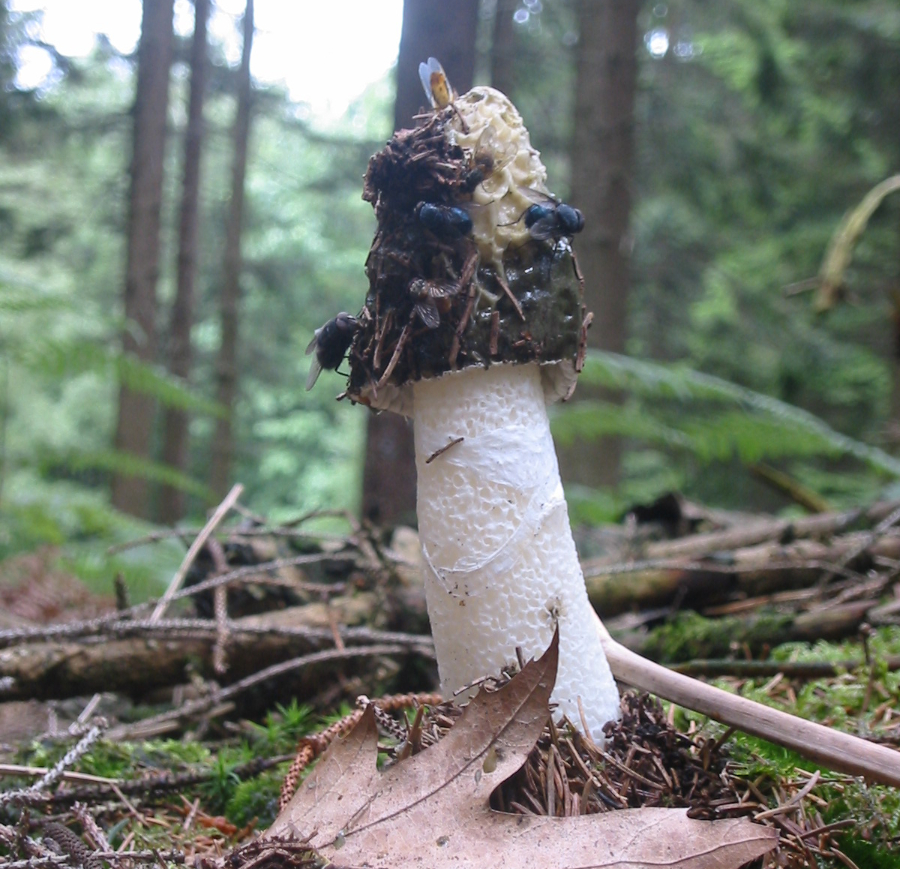 Phallus impudicus covered in gleba, which is, in turn, covered in flies. Birger Fricke

First of all, there’s that name. Not the colloquial name, stinkhorn, which sounds like a deranged Pokémon or something Elon Musk would put on a Tesla, but that scientific name. The name of the family, Phallacea, sounds kind of off in its own right, but that’s nothing compared to the moniker of the common stinkhorn (pictured above), Phallus impudicus, which translates literally to “immodest phallus.” By the by, botanist John Gerard referred to Phallus impudicus as the “pricke mushroom” or “fungus virilis penis effigie,” when he discovered it in the late 16th century.

The physiology of the stinkhorn mushrooms is where things get really interesting. And when we say interesting, we mean gut-wrenchingly gross. The fruiting body of Phallus impudicus (that’s the part of the fungus that’s ejected from out of the ground) is produced from a squishy, bizarre egg, which looks from a cross-sectional view like a slimy piece of sushi. After it bursts its way through the ground, the fruiting body also oozes out a gelatinous goop known as gleba, which contains the stinkhorn’s spores. According to the stinkhorn wiki, the gleba smells like the dead, rotting flesh of animals or dung, which is unsurprising considering the fact that the stinkhorn uses flies to spread its spores. Also, there’s that name.

The fruiting body of Aseroë rubra, a member of the stinkhorn family, in action. zefrank1

Perhaps the only non-disgusting quality of the stinkhorn is the fact that it stands as an emblem of the lengths life will go to keep on keepin’ on. That, and the fact that it is indeed edible and has a taste that lies somewhere between radish and nothing at all. Although make sure not to eat it at the wrong time in its life cycle, ’cause it’s definitely possible to get some gleba on your hands and mouth if you’re not careful.

What do you think of these stinkhorn mushrooms? Are you immensely happy that you’ll probably never get a whiff of one, or have they somehow carved out a little stinky, oozing home in your heart? Discuss all this disgustingness in the comments!