8 Things We Learned From THE RISE OF SKYWALKER Doc - Nerdist

8 Things We Learned From THE RISE OF SKYWALKER Doc

Star Wars: The Rise of Skywalker is officially out on Blu-Ray and DVD; the digital release came out a bit early, a special treat for Star Wars fans in quarantine. We quickly snatched a copy on digital over the weekend and one of the special features pleasantly surprised us. Although the extra are a bit light this time around (we have to imagine they’re saving some things for a more robust home release) there is a 2-hour making-of documentary that’s filled with fun little insights about the making-of the film.

If you’re expecting something as honest and revealing as the documentary featured on The Last Jedi Blu-ray–The Director and the Jedi–well, this isn’t quite it. The Rise of Skywalker feature is a little more Disney-friendly (i.e. it smooths over the firing of Colin Trevorrow, and some other issue we know took place with the movie) but it’s still worth a watch. Here are some fun things the documentary taught us. 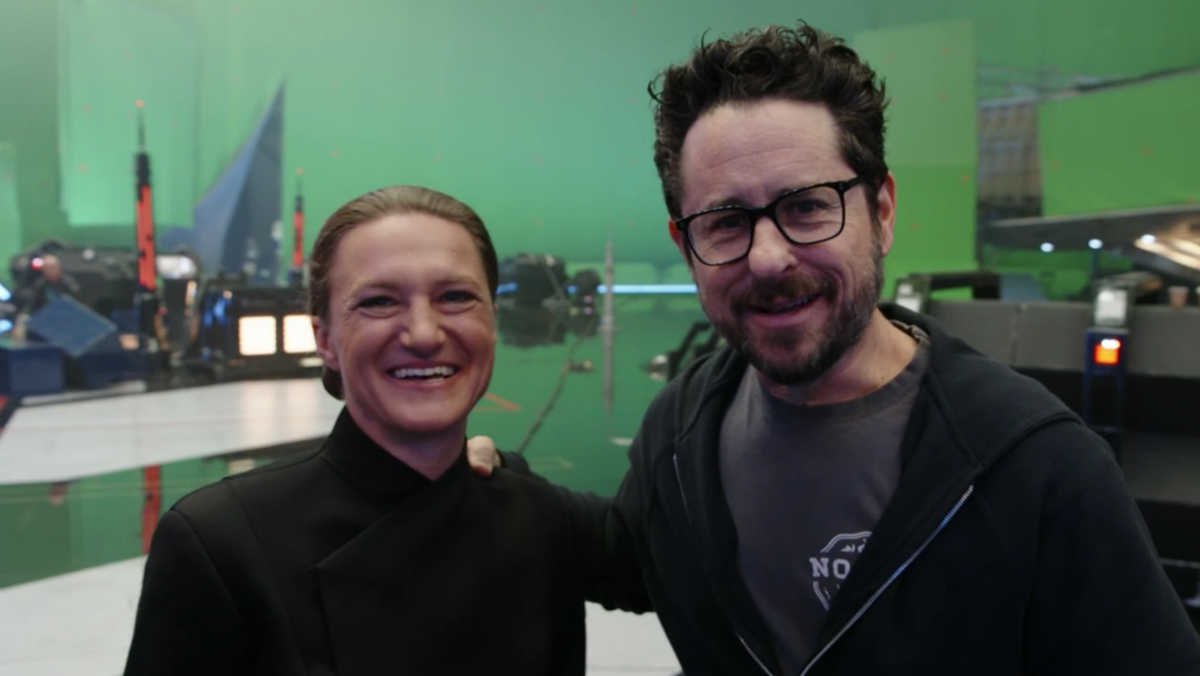 Alec Guinness’s granddaughter has a cameo

There’s a brief scene in The Rise of Skywalker where Supreme Leader Kylo Ren, under his reforged mask, addresses a small council of First Order officers. Among the party is a woman officer played by Sally Guinness–the granddaughter of legendary actor Alec Guinness, who played Obi-Wan Kenobi in the original Star Wars trilogy. She’s not the only legacy member of the cast: Carrie Fisher’s daughter Billie Lourd plays Resistance hero Lieutenant Connix in all three sequel trilogy films (and also played Leia’s body double in The Rise of Skywalker’s flashback sequence–more on that in a bit), and Warwick Davis’s son Harrison plays an Ewok in the movie alongside his dad. 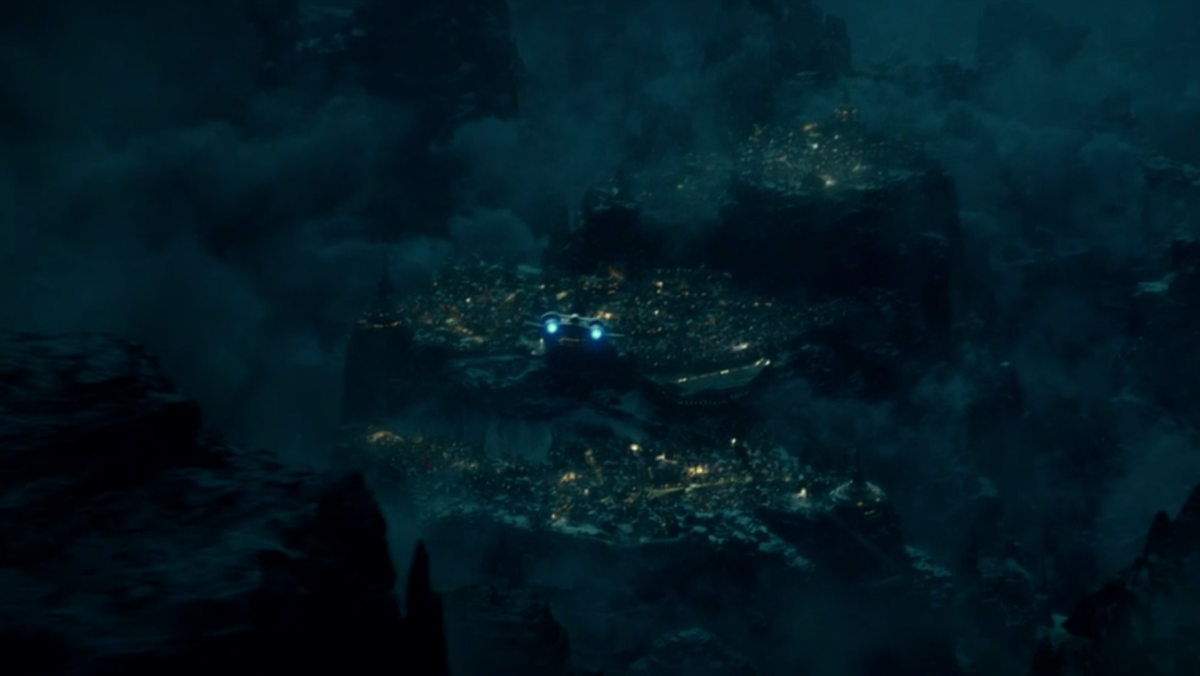 Kijimi is a Hidden Fortress tribute

It’s no secret that the films of Akira Kurosawa had a huge influence on the making of Star Wars. George Lucas has long sited the Japanese director as one of his biggest inspirations, and movies like Seven Samurai noticeably paved the way for the look and feel of the galaxy far, far away. Happy to carry on that tradition in The Rise of Skywalker, the art team referenced another iconic Kurosawa film for the planet of Kijimi. The set was a nod to The Hidden Fortress, the 1958 action-adventure film about two peasants who escort a man and woman across enemy lines–without realizing the man is a general and the woman a princess. 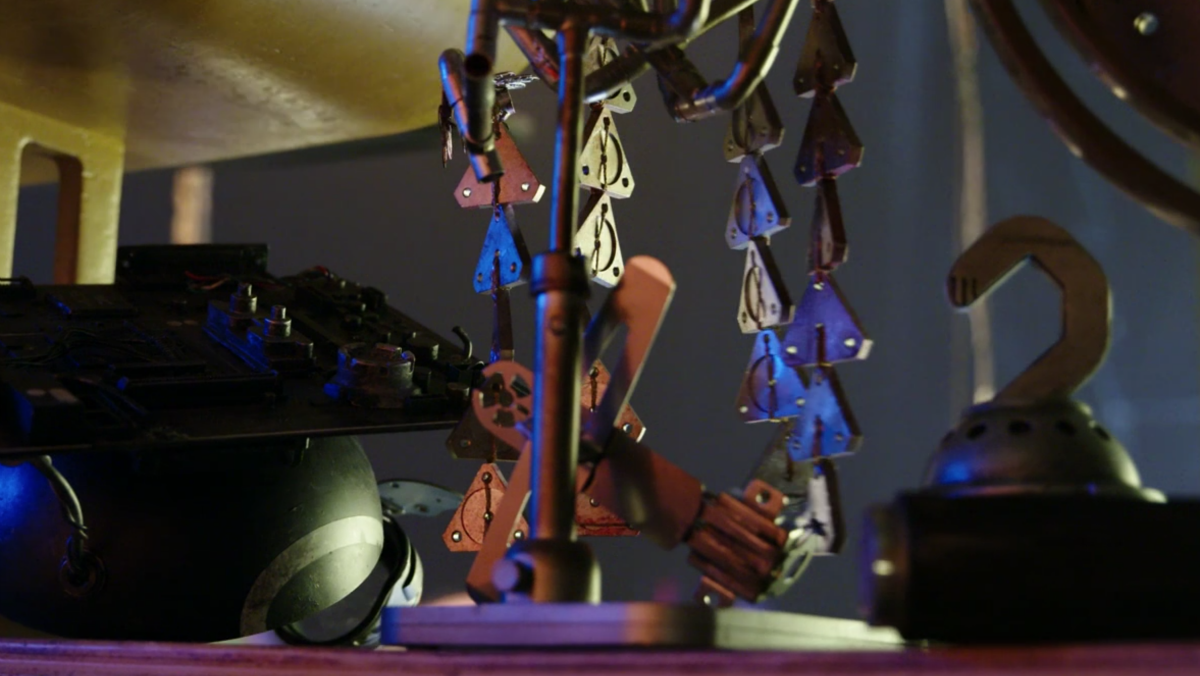 Star Wars composer John Williams is perhaps the most revered artists of all time. His scores for films like Jaws, Raiders of the Lost Ark, E.T., Jurassic Park, and more are vital parts of our cinematic memory. After Walt Disney, he has more Academy Award nominations than anyone else in history–52 total. The Rise of Skywalker director J.J. Abrams wanted to honor Williams’ place in Star Wars history, so he asked the composer to appear in a cameo. He has a blink-and-you’ll-miss-it appearance as a bartender on Kijimi, and it’s a scene you’ll definitely want to hit pause for, as it contains a ton of Easter eggs for Williams’ career–51 Easter eggs, to be exact.

As a tribute to the legend, his bar area has loads of trinkets representing all 51 one of his Oscar nominations. (He received his 52nd for The Rise of Skywalker score.) Look closely and you’ll see a hook for Hook, dog tags and a plane for Saving Private Ryan, and more.

There’s also a lovely moment in the documentary when Williams gives Daisy Ridley the first page of his original draft for “Rey’s Theme”–the anthem of the sequel trilogy. The gift is so touching to Ridley that she gets super emotional. It’s wonderful to see how much the team loves Williams, and how much he loves in return. 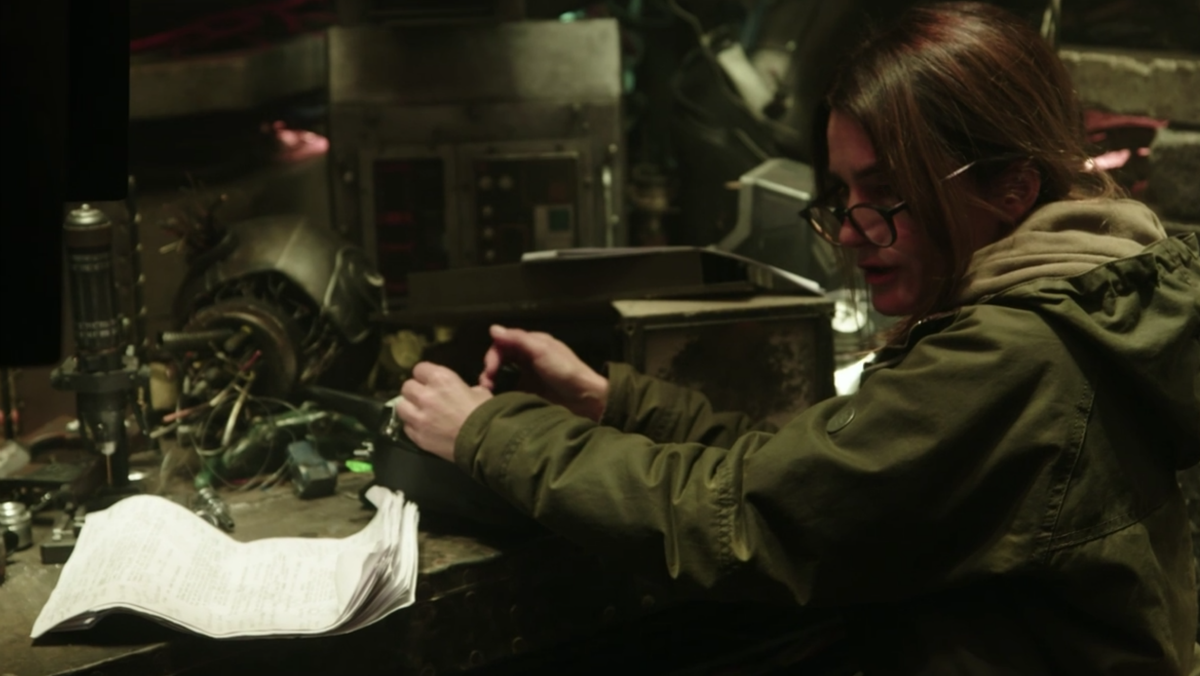 The voice of Babu Frik puppeteered his mouth movements

The standout character of The Rise of Skywalker is a little lovable alien by the name of Babu Frik. Did you know actress Shirley Henderson provides his voice? You might know her as Moaning Myrtle in the Harry Potter films? The multi-talented actress not only voiced Babu, but also got to control his mouth movements on set–a rare thing for a voice actor to do. In preparation, she spent time with the puppeteers going over the various functions of the little animatronic. The documentary shows a lot of footage of this, and it’s super fascinating to see all of the hard work poured into the character. 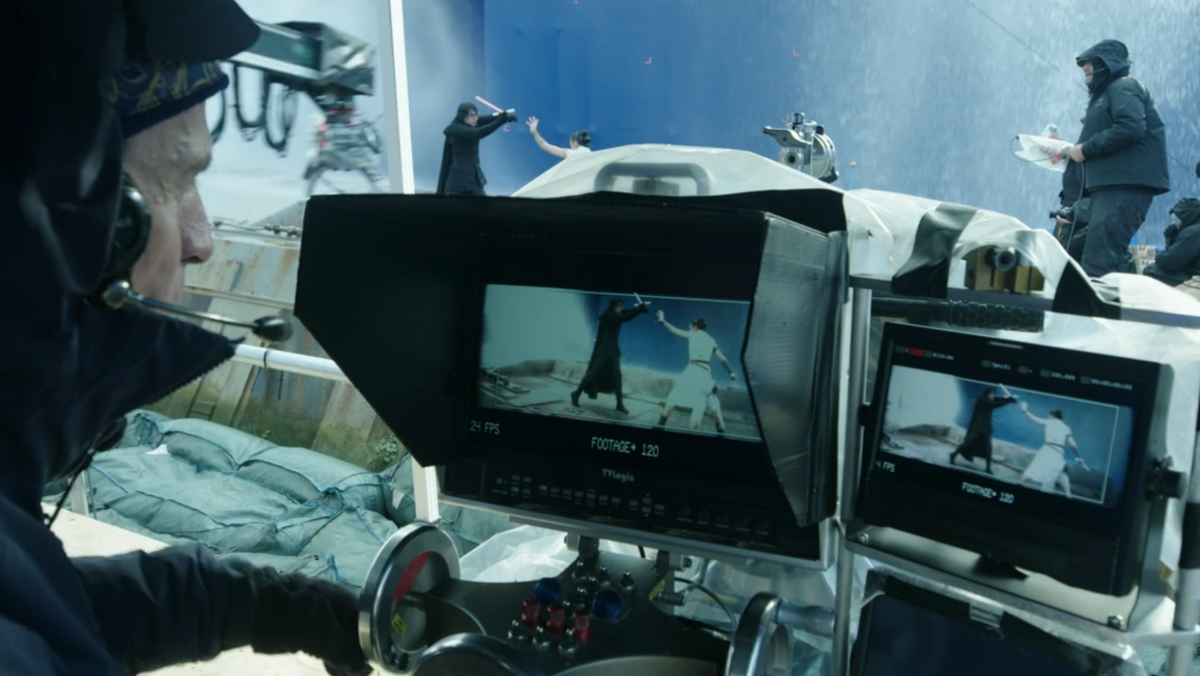 The Death Star battle was filmed on Adam Driver’s birthday

There are a few stars of the documentary. One of them is stunt coordinator Eunice Huthart, a hilarious, enthusiastic, and heavily accented British woman whose passion for her job is absolutely contagious. Another is Adam Driver, the actor behind Kylo Ren and Ben Solo, whose devotion for his character extended into all of his stunts. As Huthart explains at one point, Driver insisted doing all of his own stunts even when she protested. He explains in the documentary how protective he is over Kylo’s body language. Eventually Huthart relented–especially after seeing how much better it looked with the actor doing the stunts.

All of this paves the way for a special little treat for Driver: The most difficult stunt sequence in the film–the lightsaber battle with Kylo Ren and Rey aboard the Death Star ruins–was partially filmed on his birthday. “It was really physically exhausting, and we were wet and soaked and cold and on wires–I loved it,” Driver says with glee in the documentary. “How many times are you gonna get a chance to do that?” 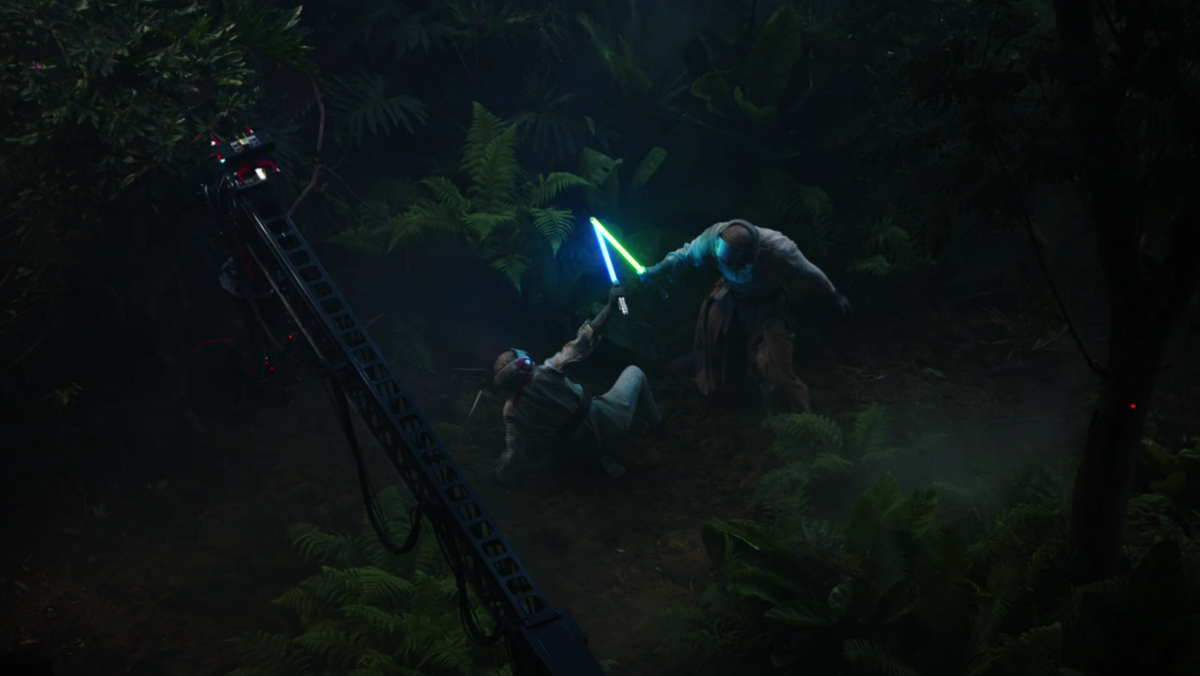 The Luke/Leia flashback was originally a bigger sequence

Near the end of The Rise of Skywalker, we see a brief flashback scene of a young Luke and Leia training with lightsabers. It only gets a few seconds of screen-time, but the original sequence must have been much longer as we see a pretty extensive bit of choreography in the documentary. Billie Lourd got to play a younger version of her mom in the scene, and got to do quite a bit of action. We hope that future releases of the film will contain deleted and extended scenes, because we’d love to see more of Leia’s Jedi training. 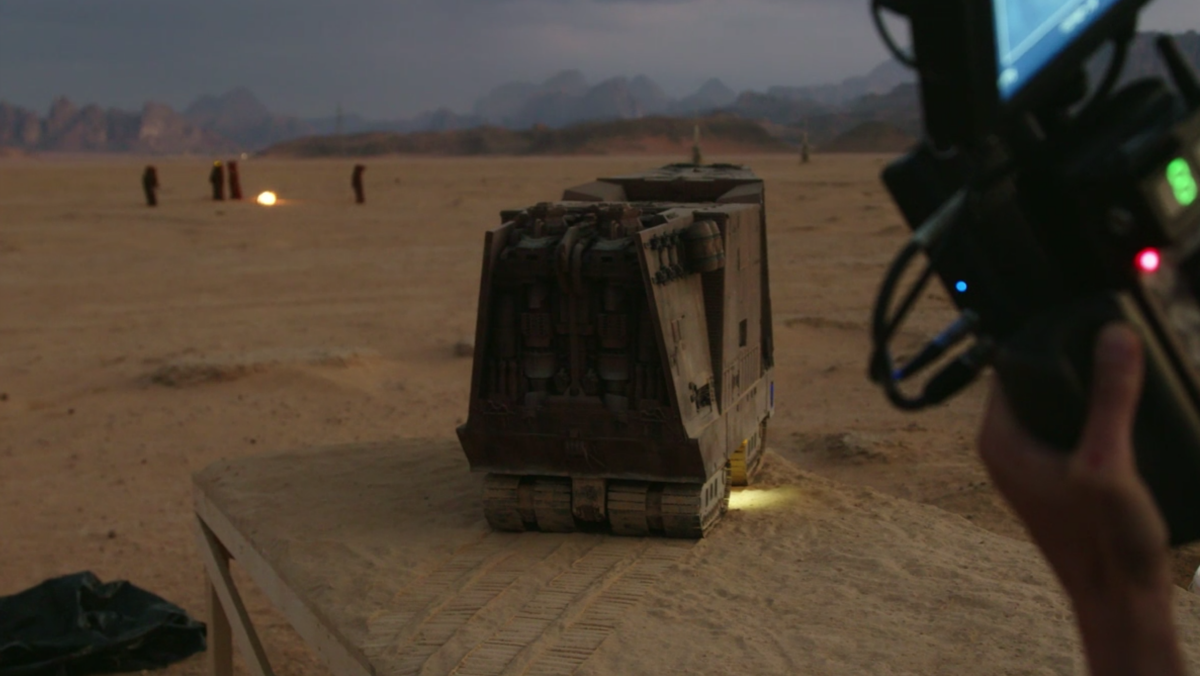 The Jawas and Sandcrawler are practical effects

The sequel trilogy, while still loaded with CGI, also avoided the fate of the prequels and went back to more practical effects. For the final sequence of The Rise of Skywalker, when Rey goes to Tatooine to bury Luke and Leia’s lightsabers and takes on the Skywalker name, the crew really wanted to honor the original films. That meant including shots of the Jawas and their Sandcrawler on the desert planet. The team achieved this entirely with practical effects. As actors stood off in the distance of the Jordan desert–which doubled as Tatooine this time around–a Sandcrawler in the foreground created the perfect illusion. George Lucas would be proud! 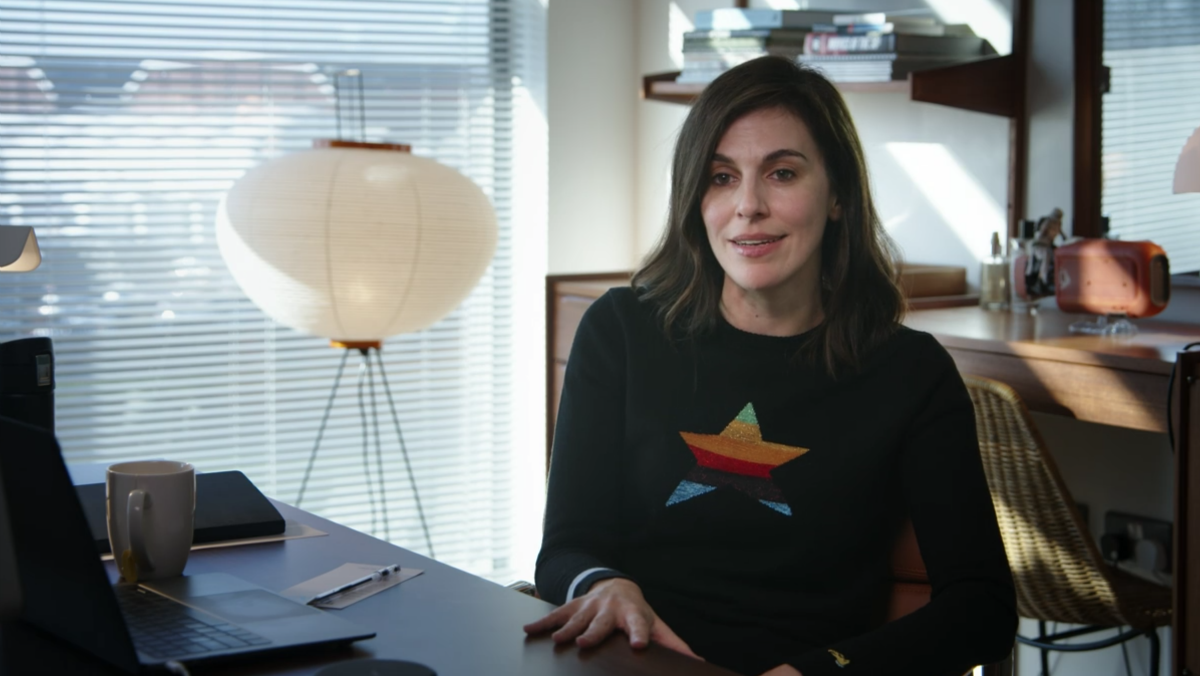 Michelle Rejwan is the future of Lucasfilm

This is more conjecture than fact, but given other behind-the-scenes rumors, it feels notable to mention. While the documentary does feature Lucasfilm president Kathleen Kennedy quite a bit, the Lucasfilm employee who gets the most face time is producer Michelle Rejwan. We see her discuss every process of the film, from the creative side to the actual on-set stuff. This lines up with rumors to come from the trades, like a November Hollywood Reporter piece that suggested Rejwan will have a major influence over the future of Lucasfilm productions moving forward. Is she the next Kathleen Kennedy? The documentary sure makes it feel that way.