Babu Frik is THE RISE OF SKYWALKER’s Best New Character

Warning: This post contains major spoilers for Star Wars: The Rise of Skywalker.

The Rise of Skywalker is proving to be a divisive  Star Wars movie. Who could have seen that coming!? Even here at Nerdist we’re split. Some of us really loved it, some of us really hated it, and lots of us fall somewhere in-between. But there’s one thing about the film every fan of the galaxy far, far away agrees on—Babu Frik is fricking awesome. The diminutive droidsmith with a positive attitude and a great laugh is the unquestioned MVP of the movie.

We were ready to love Babu Frik from the first moment Lucasfilm introduced the little guy. With his big eyes, smushed face, and tiny welding tools, he seemed poised to be the next great adorable Star Wars creature. What we didn’t expect was just how much we would love him.

Babu is as cute as a porg, but unlike those space birds Babu has a skillset that isn’t limited to how good he is spit-roasted over and open fire–and in The Rise of Skywalker, it proved vital in saving the galaxy. His ability to bypass droid safety protocols  enables the Resistance to decipher a Sith message engraved on the dagger that ultimately led Rey to Exogol. 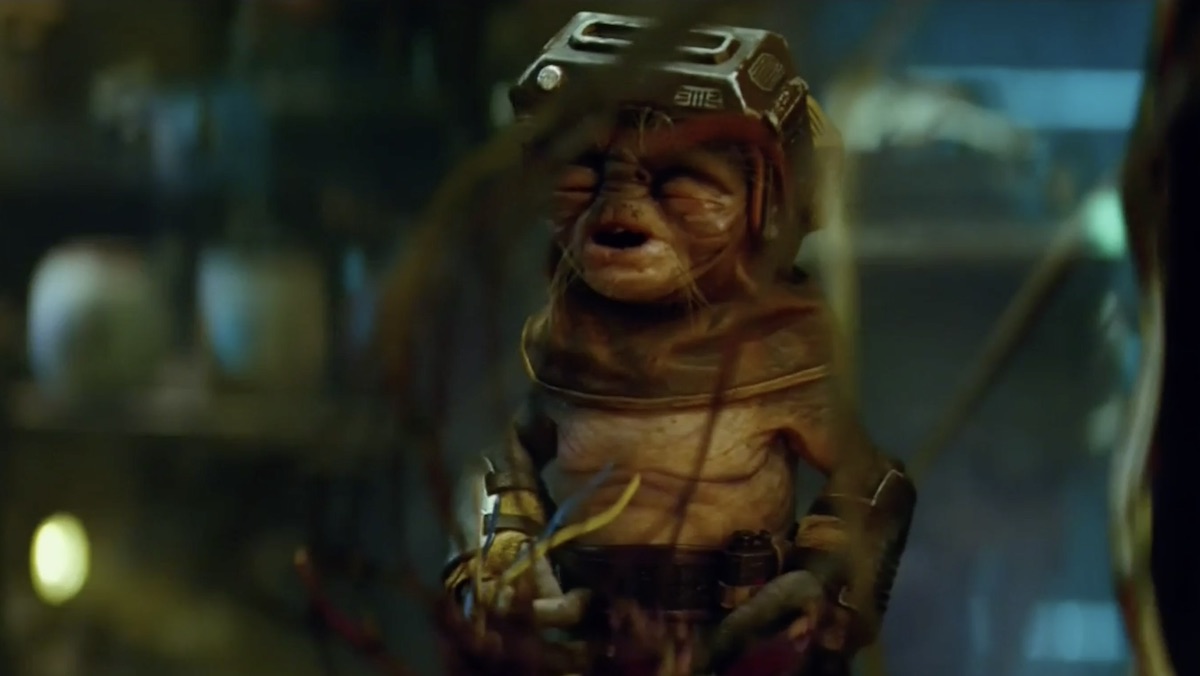 But Babu is so much more than what he can do. He’s also defined by how he does it. He was asked by strangers to take on a dangerous task under dire circumstances. The First Order was conducting night raids on Kijimi, already a dangerous community to live in under the best of circumstances, according to Poe (Oscar Isaac) and Zorii Bliss (Keri Russell). Babu would pay with his life if he was caught, and it would have been easy for him to turn down their request.

Instead he relished what he was doing and did it with joy. In just a couple of scenes Babu brought more positivity and enthusiasm to The Rise of Skywalker than almost every other character combined. He made us happy, and he also made us laugh. Whether he was yelling his own name, ignoring C-3PO’s last-second change of mind, or laughing himself, Babu was, as the kids saying, living his best life. He was pure Star Wars in all the best ways—sincere, hopeful, and fun.

It’s why all fans, no matter what they think of the film, absolutely adore him.

hi I’m logging onto this hell site to talk about our lord and savior babu frik pic.twitter.com/wKZZpLGSpP

Also Babu Frik is everything to me now. pic.twitter.com/NySENNhYxV

Rise of Skywalker is worth seeing just for Babu Frik

Just reflecting on last nights viewing and wondering if I should see it again tonight. One thing I am certain of is that Babu Frik is probably my new favourite character in the whole franchise

Babu Frik is the way. I have spoken.

Whatever opinion you have of #StarWarsRiseOfTheSkywalker you can’t deny that Babu Frik stole the film pic.twitter.com/lRHf9TiiI7

Babu Frik steals every scene he’s in and I’m not kidding in the slightest. https://t.co/Hgy00mORjD

#RiseOfTheSkywalker – a hot mess of the film that at least gives us Babu Frik, for which we should be thankful.

Not that I’ve been sitting here playing with his perfect face and some filters… pic.twitter.com/UKb8LWt72f

Babu Frik is so great some people love him even more than another tiny Star Wars creature who has defined our existence for the last two months.

Not that I’ve been sitting here playing with his perfect face and some filters… pic.twitter.com/UKb8LWt72f

There’s enough room in our hearts for both the Mandalorian scene-stealer and for Babu. But until that inevitable team-up happens, we should be grateful Babu Frik is around not just to hotwire 3P0’s brain, but to reprogram our hearts.