E.J. Mellow’s next novel dips into romantic fantasy. Song of the Forever Rains, the first in the author’s Mousai Series, focuses on the Thief Kingdom in Aadilor. Larkrya and her two sisters sit at the center of the tale as Larkrya plots to use her magic. Her goal: to stop a conniving Duke from using and controlling his tenants. But then Larkya encounters the Duke’s heir… who seems different. And we have an exclusive excerpt from the upcoming book highlighting that meeting. 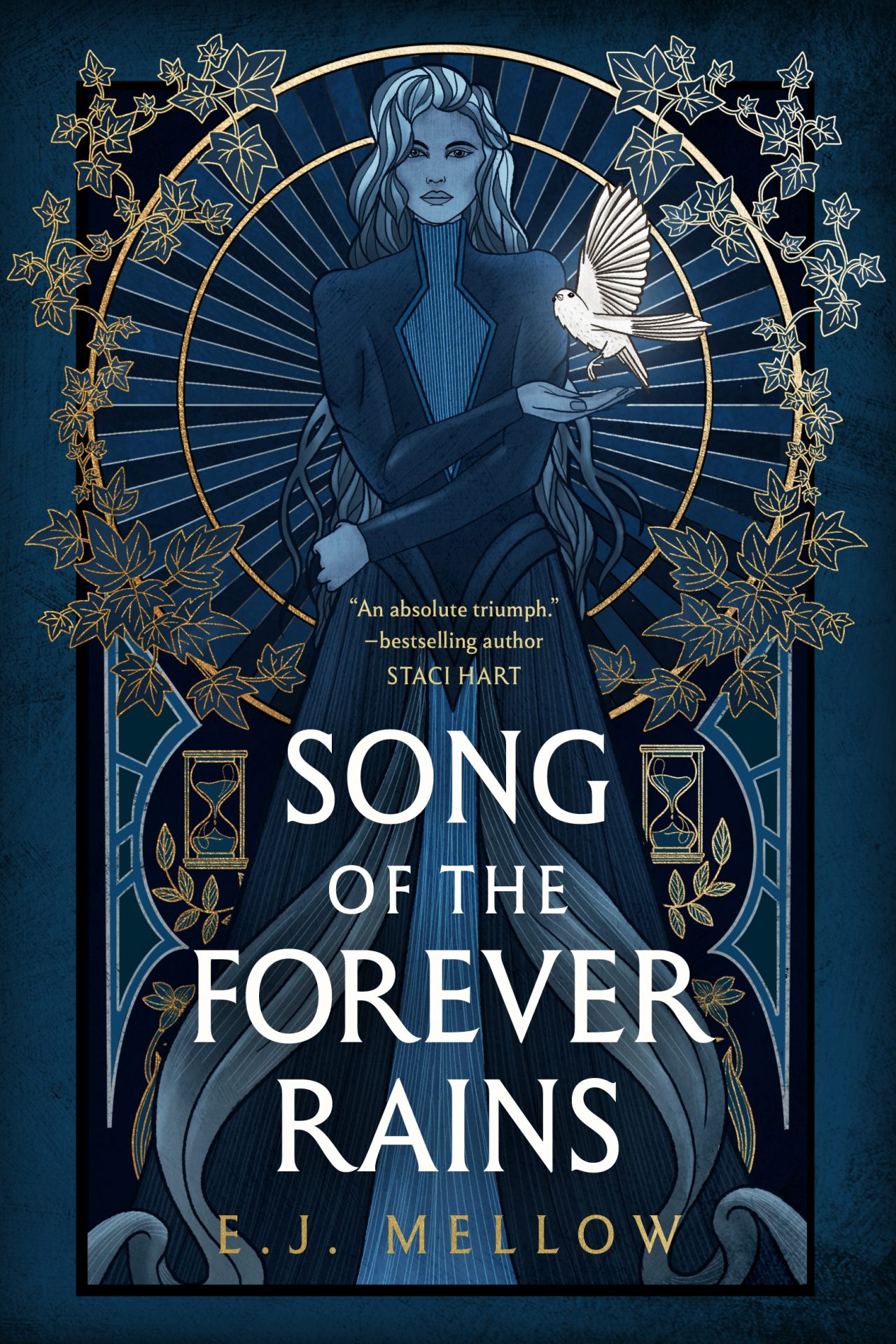 In the below excerpt, Larkrya meets the Duke’s heir, Lord Darius Mekenna. We wouldn’t call it a meet cute.

Crossing a small bridge that led to the last ring of the lower quarters, a commotion brought Larkyra to glance down a side alley.

A group who looked a lot like her were surrounding a man who looked nothing like any of them. His well sewn clothes gleamed with a higher standard of living, his boots waxed to shine a matching glint as his sword in hand.

While he was armed, he was surely outnumbered and the crude shivs and iron-spiked balls resting in his opponents’ grips didn’t help matters.

Now, normally those who lived in the lowers learned to pay no mind to scuffles like these. Survival was not just for the strong, but also for those who kept their noses clear from other’s troubles. But Larkyra was not ‘normally’ anything, and the pang of empathy she felt in her chest seeing anyone cornered, pulled her into the ally.

“I do not want to fight,” said the man, his accent thick with well-bread education.

“And yer sword,” said another.

“And that pretty cape,” added one more.

“The boots,” concluded the last. “I’d like thems shiny boots.” “Then we leaves you right be,” finished the first.

“Why stop there?” challenged the man. “Why not take all my clothes?” “Nah, that would be right greedy.”

The man raised a shocked brow. “Good to know you all are not without reason.”

The larger street dweller stepped threateningly close, blade raised. “I thinks he laughs at us gents.”

“If he does not,” chimed in Larkyra from where she was leaning against a wall, watching. “I certainly am.”

“Who are ya?” barked the leader, his crew all glancing her way.

“I’m here to tell you to leave this poor man alone.”

A laugh burst from the giant. “He ain’t poor anything, little mop. Now be on yers way and we’s promise not to hurt ya next.”

“I can’t do that,” said Larkyra, her magic beginning to stir in her belly.

“Because today is my birthday, you see, and I’d really like it if I could spend it without seeing anyone get robbed…or killed,” she added for good measure.

“Then I’d spend yer day in bed, little mop, or pop out dem pretty blue eyes, fer no grains fall down here without all dem things.”

“Yes,” agreed Larkyra. “But I’d still like to try. Now, as I said, you should leave.” More amused chuckles from the group.

“Please, miss,” said the cornered man. “I have this under control.”

“But for how much longer?” challenged Larkyra.

He appeared to think on this as he resized his opponents.

They sneered and raised their weapons.

Larkyra wasn’t in the mood for a fight, but she also didn’t want to merely walk away. Not now. Yet currently with only one proper working hand…

Ours, crooned her magic. Let us do it for you.

Larkyra internally stroked her powers which swam restless in her lungs, a master calming a hungry tiger.

Larkyra had already sensed this group was without the lost gods gifts, a common finding in Jabari, and one reason she had decided to intervene. She wanted to help, but quickly and without drawing attention. And though she wasn’t meant to use it, was supposed to be without, today, the last day of her Lierenfast, she decided a little magic wouldn’t hurt anyone. At least not as she was now, calm, collected, controlled.

With Larkyra’s mind made up, her powers tickled up her throat as she commanded, “GO.”

A burst of her yellow magic smacked into the thugs faces, ceasing the last of their laughter.

Larkyra moved closer, her voice dripping in warning. “Be on your way or you will have more than blood to pay.”

If any passerby possessed the Sight, as all who held the lost gods’ gifts did, they would have seen warm honey-colored mist pouring from each of Larkyra’s words, clouding the heads of her victims. But no one here held such gifts, so no one here saw a thing.

With glazed eyes the men blinked before they each turned and left.

The alley sat quiet as her magic retreated.

“Well,” said a deep voice from behind her. “That was rather…odd. But I thank you.” Larkyra found the genteel man seething his sword, while his curious gaze lingered over her. Now alone, Larkyra had a chance to get a good look at him as well. She instantly knew one thing; He was beautiful.

His deep copper hair sang in a glint of light that cut through the alley and contrasted nicely against his pale skin and dark attire. His crisp, clear features shone with youth, yet his green eyes held walls, calculated distrust. Larkyra wondered if this young man always wore it, or only now because of what he looked upon: another street urchin after his fine things.

“You’re a fool for coming here dressed like that,” said Larkyra.

The man glanced down. “Yes, perhaps I should have done better. But these were the plainest clothes I had near.”

“You’re twinkling like a shiny copper coin in a pile of dirt,” scoffed Larkyra. “Anyone passing will want to snatch you.”

“Is that what you’re doing now? Snatching me?”

Larkyra raised her brows. “I thought it was rather clear. I was saving you.”

“Yes,” mused the man. “That was rather impressive. How did you get them to listen to you like that?”

Larkyra pushed down her twinge of annoyance. “You stand here, still with your pouch of coin and cape and sword and shiny boots. What does it matter how anything came to be? Now, I’d hurry back to where you came. I don’t know if I’d be inclined to save you again today.”

She set off toward the main street.

The man followed. “That’s just the thing. I was trying to go back to where I came, as you put it. But you see, I seem to have…well…”

She let out a sigh, catching the strange glances from those around. They no doubt assumed she was a girl trying to pull trix standing and conversing with such a well-bred.

“Where are we going?”

“You aren’t very quick are you?”

“I’m taking you out of here. Wherever your back is, you’ll need to find once we reach the middle ring.”

One would hope, thought Larkyra as they turned and twisted through the maze that were the lowers.

Larkyra’s gaze kept creeping to the man beside her. He was rather tall, she noted, and though thin, not scrawny. She could tell his strength lie in quickness rather than brute force. “Why are you here anyway?” she asked after a moment.

Green eyes slid toward her. “I’m in Jabari for a Eumar Journé.”

Larkyra knew he knew she was asking why he was in the lower quarters, but the man obviously didn’t want whatever business he was attending to here be known. Larkyra appreciated a good secret, so let it slide.

“That’s a birthday celebration for a girl who has come of age,” explained the man as they walked over a crowded bridge. “Who has turned nineteen—”

“I know what a Eumar Journé is,” cut in Larkyra. “Who is the family?”

“And why are you sure of that?”

Larkyra bit back a grin at his flushed features. Despite the inconvenience this put in reaching her destination, Larkyra decided she was rather enjoying his strange company.

“They are the Bassettes,” he admitted eventually.

“Ah,” said Larkyra, a flutter filling her belly hearing the name. “A council family. That will be a grand party, indeed.”

“Yes,” said the man studying her, and then, “you said it is your day of birth as well?” “It is,” grinned Larkyra.

He smiled at her jab and for a moment a street urchin and a gentleman walked side-by-side with shared expressions.

“Does it hurt?” he asked, his gaze going to what she cradled to her chest. “Your hand?” Larkyra’s cheeks warmed, realizing she had been holding the dirty bandages for some time.

Which made her remember she was rather dirty all over, and no doubt smelled. Given the manure on her shoes.

She hid her injury at her side. “Not nearly as bad as it did.” “What happened?”

“I decided I no longer liked a few fingers, so bit them off.” “You do not have to lie,” said the man.

“How do you know I lie?” countered Larkyra.

“Because lies and I are well acquainted.”

She met his gaze, saw a flicker of frustration pass. Not toward her, however, but to whatever he referred.

“Here we are,” said Larkyra, pushing passed the subject. “Can you get to your destination from here?”

The man looked to their surroundings. They stood in the middle ring’s market. The sound of venders yelling prices to passing buyers twirled with the salty scent of street food being grilled over open flames.

“Thank you again,” said the man as he extended a gloved hand. “It seems I owe you a great deal for today.”

Larkyra stared at the offered palm, at how clean the leather was was compared to her own dirt-stained skin. Even though she saved his life, he was being very kind to a creature such as she. A street vermin. A nobody compared to the ranks of him.

Tentatively, she placed her good hand in his. It was warm and firm as he gave it a shake. “My name is Darius, by the way,” he said, “Darius Mekenna of Lachlan.”

“It was interesting to meet you, Darius Mekenna of Lachlan” said Larkyra before she turned.

She glanced at him over her shoulder.

“I could repay you a portion of what I owe now,” offered Darius. “Are you hungry?” A part of Larkyra wished very much to say yes, because in truth she was. Plus, to stay longer with this man whose smile, and curiousness brought forth a lightness in her chest. But alas… “Afraid not,” she said. “You’ll have to repay me another time.”

Darius frowned. “But what if we don’t meet again?”

To this Larkyra grinned. “The lost gods work in wonderous ways,” she began. “Who knows? We just might.”

Excerpted from Song of the Forever Rains by E.J. Mellow with permission from the publisher, Montlake. Copyright © 2021 by E.J. Mellow.

Song of the Forever Rains arrives on July 1, 2021. You can place a pre-order now.