Humans are not shy about keeping dangerous animals as pets. Lion tamer is an actual job. Bears, elephants, and tigers have long histories performing in circuses and Las Vegas shows. And even the dumbest people on the planet can live alongside deadly predators. Turns out that’s not a modern phenomenon though. Our ancestors had no qualms about domesticating even the most menacing of creatures. In addition to turning ferocious wolves into adorable little dogs, researchers have found evidence prehistoric man also kept the world’s most dangerous bird as a pet.

A new paper (we first learned about at DesignTAXI) in Proceedings of the National Academy of Science outlines scientists’ findings of more than 1,000 cassowary bird eggshell fragments. They date back to between 6,000 and 18,000 years ago. And their shattered patterns indicate our prehistoric ancestors once domesticated those large birds. From the paper:

“Eggshell is an understudied archaeological material with potential to clarify past interactions between humans and birds. We apply an analytical method to legacy collections of Late Pleistocene to mid-Holocene cassowary eggshell and demonstrate that early foragers in the montane rainforests of New Guinea preferentially collected eggs in late stages of embryonic growth. This finding suggests that foragers regulated the exploitation of cassowaries and may have hatched eggs to rear chicks. The montane rainforests of New Guinea may thus present the earliest known evidence of human management of avian breeding.” 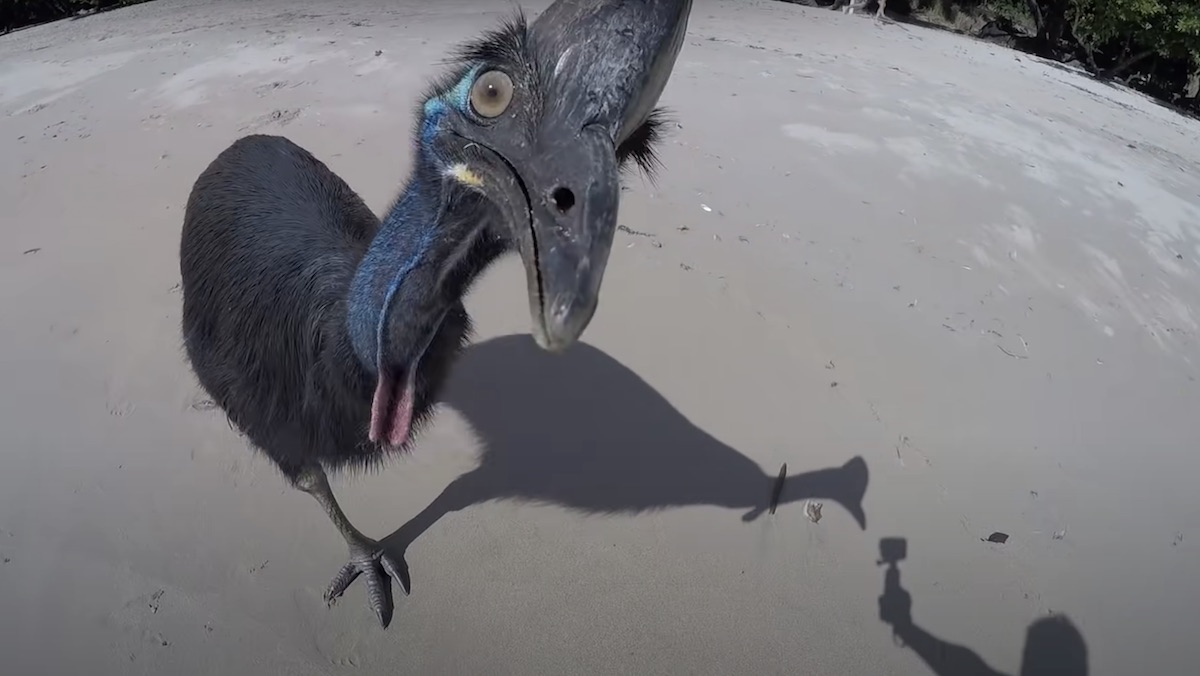 Some shells point to humans breaking eggs prematurely for food. (What a run for scrambled eggs!) But other shells hatched normally. That’s a big deal. Our ancestors not only ate egg embryos, they seemingly also raised some cassowaries too. That might sound like a pleasant arrangement. But those birds are not like chickens. They aren’t exactly easy to tame or live with. They’re big monsters the BBC calls “modern-day dinosaurs.”

Cassowaries, known as “the world’s most dangerous bird,” are one of the only birds known to ever kill a human. (Though fortunately not in 100 years.) Which those flightless birds are more than capable of. They’re violent, ill-tempered animals with powerful legs. They can stand more than five feet tall. And they also have four to five inch claws. Which the World Wildlife Fund says “rivals Freddy Krueger’s.”

Considering male cassowaries also guard their eggs for 50 days (before raising chicks for nine months) like the world’s most protective deranged dad, it’s incredible our ancestors even thought to steal any eggs from a cassowary nest in the first place. But it might not be that surprising they then managed to live with the birds afterwards. The WWF also says “unprovoked, cassowaries are fairly shy and peaceful.”

Obviously humans have never been shy about domesticating even the most deadly animals. But how anyone one of us ever figured out we could do that is still hard to believe. Those must be some damn tasty eggs.