Scientists at the National Oceanic and Atmospheric Administration (or NOAA) recently put out a report describing a dive into an underwater canyon. Like one we’d expect to come from a trip to Enceladus, the report described different weird ocean creatures. One aquatic animal spotted was a jellyfish that looks like a mix between a jumbo blood cell and an umbrella. The throbbing, bobbing thing may even be a whole new species of jellyfish. 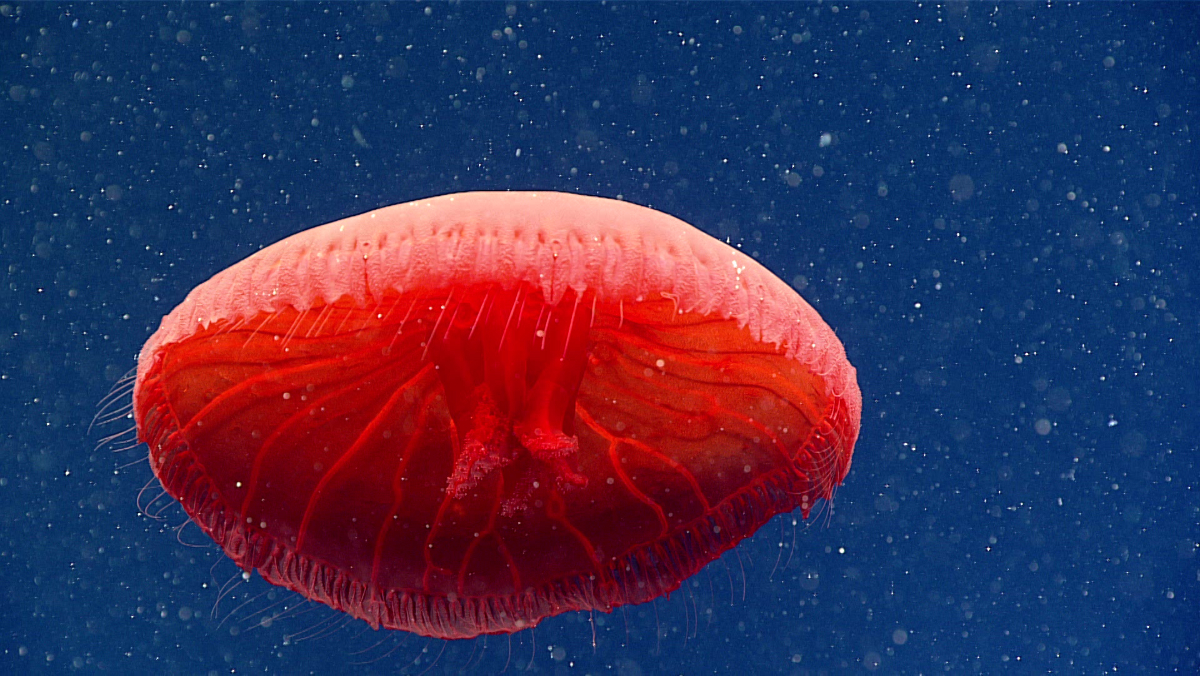 The NOAA released the dive report in late July of this year. In it, they sum up a look at the water column of the underwater canyon. The water column is a concept used in oceanography to describe the characteristics of seawater at different depths of a defined geographical point. The explorers took a look at this canyon from the ocean’s surface down to a depth of 3,500 feet.

The remotely operated vehicle, Deep Discoverer, eyed more than 650 individual creatures during the dive. This included an array of ctenophores, siphonophores, arrow worms, and larvaceans. All weird-sounding names to be sure, because they’re all bizarre ocean aliens. Especially the siphonophores, such as this translucent tube of wiggly zooids. (Zooids are the weirdest!)

Deep Discoverer saw the scarlet jellyfish at around 3,000 feet below the ocean’s surface. NOAA explorers are certain the jellyfish is a member of the genus Poralia. However, they say they still can’t identify its species. This leads them to consider whether it is a new species of jellyfish altogether. Regardless, the crimson animal is a glorious, undulating flower petal of the deep. One that looks freakin’ giant even though its bell is likely only around four inches in diameter.

After the mysterious Poralia, the second-most intriguing animal from this dive was the helmet jellyfish. This weirdo alien, shown in the video above, would’ve surely taken the cake for the oddest oddball had scientists not already cataloged it. Just look at the way the oculus-looking thing moves. But it better be careful… We know sea creatures love to lure things into traps.