Video of Perseverance Rover Landing on Mars Is a Wild Ride

Unless you’ve been living under a hunk of Martian regolith, you’ve probably heard about NASA landing its Perseverance rover on Mars. The successful landing, which occurred in the planet’s Jezero Crater on February 18, was massively difficult to pull off. A fact made obvious in this video from the space agency showcasing the rover’s 330-foot-per-second descent and wild propulsive landing.

NASA recently uploaded the landing video (above) to its YouTube channel. The space agency notes several cameras aboard the rover, and the other parts of its landing system, captured the touchdown. Meaning the video includes views from the rover itself as well as the descent stage “jet pack” and protective aeroshell.

The three-and-a-half-minute video shows Perseverance’s landing suite working exactly as NASA engineers intended. At about 20 seconds into the video, the parachute attached to Perseverance’s lander (the contraption including everything but the rover itself) deploys perfectly. Then, 30 seconds in, the lander’s heat shield falls away. 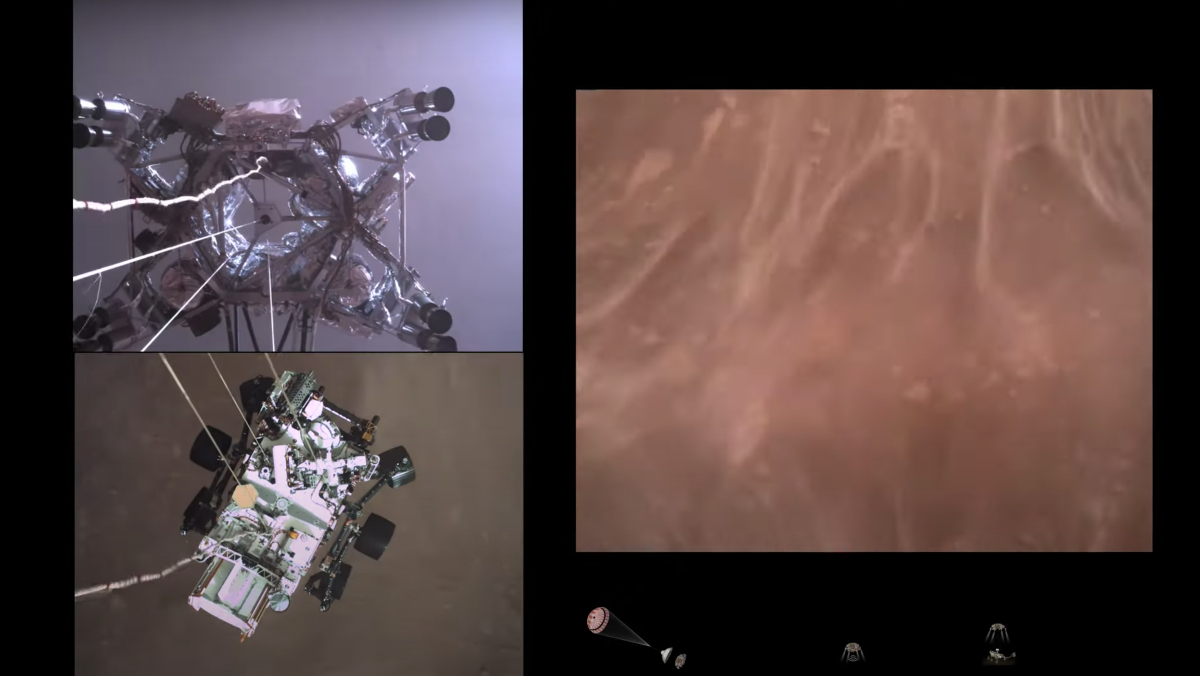 After it jettisons the heat shield, the rover continues falling before initiating the propulsive thrusters on the lander. A few seconds after that, the lander lowers the rover down to the surface of Mars via a tether—in a “skycrane” maneuver—before the lander boosts itself away from the rover.

Along with the thrilling landing video, NASA’s also released a 30-second panorama of Mars’ surface taken by Perseverance. That video (below), shows images taken by the rover, stitched together into a 360-degree view. The video includes a shockingly bright look at the Sun from Mars’ surface.

Those who want to learn more about the landing should check out this panel discussion from the space agency. Or these third-person simulations of the way Perseverance landed on the Red Planet. There are also some fantastic—extremely tasty— ways you can celebrate the waking up of humanity’s newest interplanetary robot.