This week, NASA’s Perseverance Rover will (hopefully) touch down on Mars. Once there it will explore our celestial neighbor to “seek signs of ancient life.” And it will collect samples of rock and soil it might someday bring back to Earth. It’s an exciting mission years in the making. However, there’s nothing most of us can do to ensure its success. But at least a tasty new treat will let us celebrate its landing back here on Earth. Krispy Kreme has announced a special new Mars-inspired doughnut that captures the Red Planet’s rocky terrain.

But it won’t even be around for an entire sol. 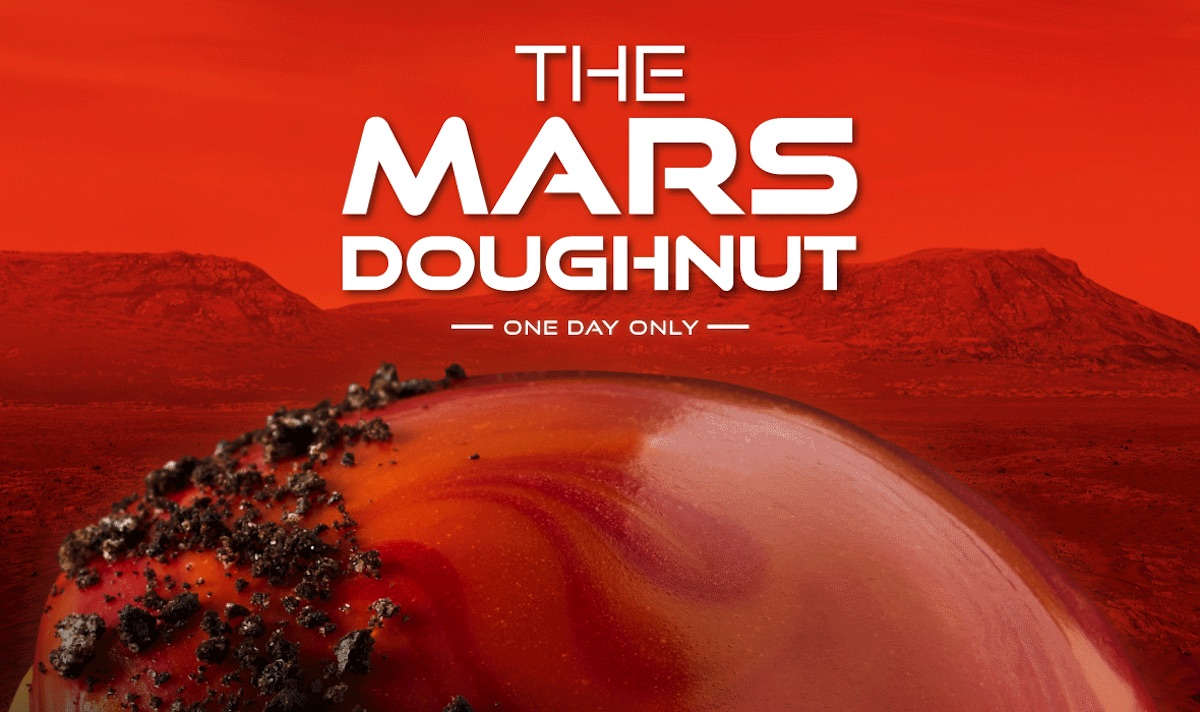 The countdown is on to February 18. For NASA engineers, that’s the day they’ll see whether Perseverance can live up to its name and make it safely down to the surface. For the rest of us, that means filling our faces with Krispy Kreme’s new Mars Doughnut. (Which we first heard about at Laughing Squid.) It will be available for one day only at participating shops, and only “while supplies last.”

However, without even tasting it, we won’t be surprised if this special, limited-time doughnut makes a glorious return someday. (Maybe if/when Perseverance returns to Earth.) It sounds like a pretty terrific little treat. It consists of a chocolate kreme-filled doughnut dipped in caramel, topped with a “red planet swirl” icing. It’s finished with chocolate cookie crumbs on one side to recreate Mars’s rocky surface.

ONE DAY ONLY, 2/18, grab your own piece of the Red Planet to celebrate @NASAJPL Perseverance Rover touching down on Mars!🍩🚀 This treat will be out of this world! #CountdownToMars #krispykreme

Available 2/18 only. Participating US & CAN shops. All info- https://t.co/X6CmmGTJgx pic.twitter.com/z0XZSLwRaB

Would eat. Nay. Must eat.

If you feel the same way, whether because you love space exploration, doughnuts, or both, you can find the list of participating shops at Krispy Kreme’s website. (:checks for himself:) Oh c’mon! We can land a robot on Mars, but we can’t figure out a way to get a Krispy Kreme within four hours of my house?

Forget the rover. February 18 will be the day some of us had to persevere after missing out on the Mars Doughnut.