We all know the story of Hamlet. William Shakespeare‘s tragedy about the Prince of Denmark, his deceiving uncle, and his quest for the crown is arguably the Bard’s most famous tale of all, a staple in high school classrooms and the subject of dozens of film adaptations. And given its universal themes, the play is prone to unique adaptations; The Lion King, for instance, was based on Hamlet, and other creators have morphed the familiar subject matter into brand new stories that pay homage to Shakespeare’s world while forging their own identities.

That’s the case for Claire McCarthy’s Ophelia, which stars Daisy Ridley as the eponymous lover of Prince Hamlet, who—in Shakespeare’s version—is a beautiful, unknowable madwoman who becomes overcome with delusion and commits suicide. McCarthy’s film plunges into the depths of Ophelia’s heart and soul, attempting to understand and sympathize with the mysterious literary figure. The movie, based on the novel by Lisa Klein and adapted for the screen by Semi Chellas, is soft, feminine, and uniquely interested in the female relationship at the center of the story: That of Ophelia and Hamlet’s mother, Queen Gertrude, herself a misunderstood part of the story.

Naomi Watts portrays Queen Gertrude—and her twin sister, or possible alter-ego, Mechtild—in Ophelia. She recently spoke with Nerdist about tackling the famous role, portraying the witchy Mechtild, working with Daisy Ridley, and what her upcoming Game of Thrones prequel series has in common with Shakespeare.

Her familiarity with Hamlet and preparing for the role

In Shakespeare’s play, Gertrude has a turbulent relationship with her son, Hamlet, after the murder of his father and her husband by Claudius. Things are made more fraught by Gertrude’s remarriage to Claudius and seeming lack of guilt in her new relationship. Her lack of agency make her a very hard-to-read character, which was both a challenge and a gift to Watts. “Gertrude was always the most complicated character, in a way,” Watts explained. “People continue to be unsure of where she stands in the story. But in this version we’ve made, everything is reimagined by virtue of the fact that the story is told through Ophelia’s point of view, and we’ve established the female bond there.”

That bond adds enormous color to the complicated character. We witness the moment Gertrude first takes a fondness for the young, plucky Ophelia, and see their relationship bloom into a mother-daughter-like bond. But when Ophelia, Gertrude’s most trusted lady-in-waiting, takes an interest in Hamlet, things start to sour between the two. Still, Gertrude never recedes into the background like she does in the play, and that’s largely thanks to the female creators and Watts’ careful portrayal and affection for the character. “She’s still a complicated woman, but virtuous in many ways as well, and I love that we created the opportunity for her to have these other sides.”

Playing dual roles as Gertrude and the witch Mechtild

In the film, Gertrude quite literally has another side in the form of the mysterious Mechtild, who lives in the bowels of Elsinore Castle and creates potions that Gertrude collects; elixirs that help her maintain her youthful beauty. Watts plays both roles, and the nature of the relationship between the two women is largely ambiguous. “That’s open to interpretation,” Watts said of the part. “Is it her sister, is it her twin, is her alter ego? That’s up for you as an audience to decide.”

Regardless of your read on the situation, it’s clear that Mechtild is a witch of sorts, a figure that has become a powerful symbol for modern young women reclaiming their oddities. Watts called that witchy element “a great bit of messaging” and a “relevant” conversation. “I just loved that [Mechtild] was saying, ‘Take hold of your own life and fight for what you believe in.’ There was just something so powerful about her. She’s been abandoned and isolated, banished to the forest, and yet she’s found a way to survive.”

Gertrude’s split identity recalls Watts’ work with David Lynch, in whose Mulholland Drive she also played two characters. “[Lynch] certainly set the path, because this is not the first time since then I’m playing with duality and identity. People clearly saw that and thought, ‘Oh she can do that.'” 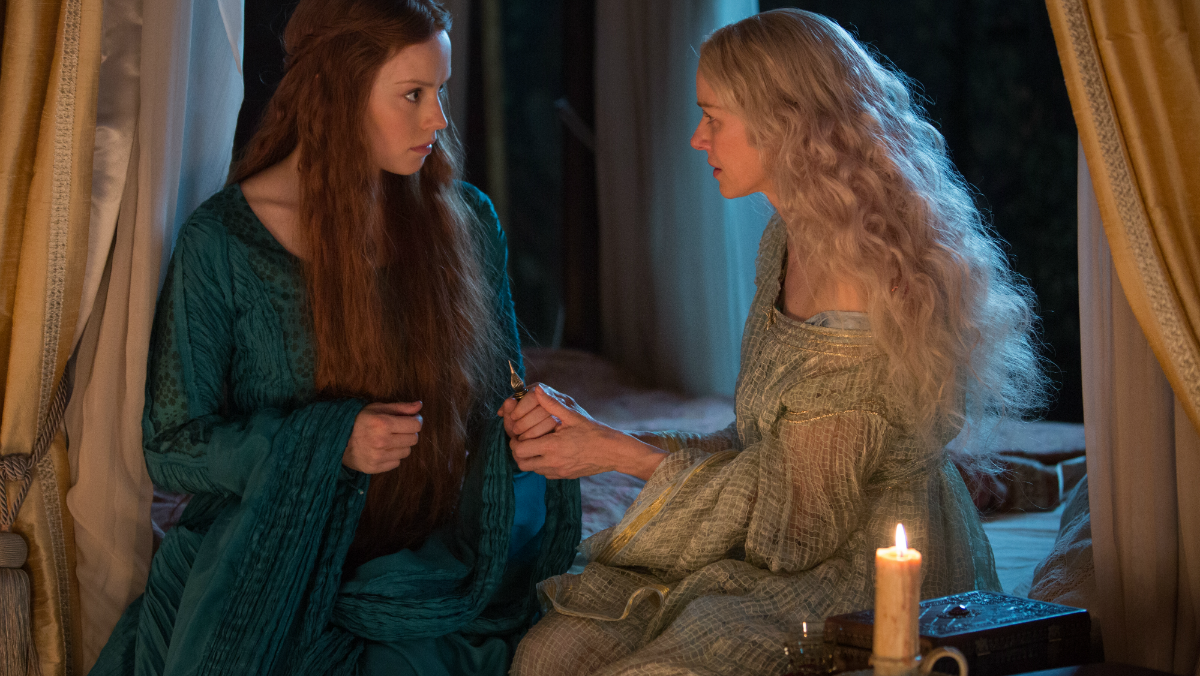 Both Gertrude and Mechtild have fascinating relationships with Ophelia, who’s played with a wide-eyed intensity by Daisy Ridley, best known for her work as Rey in Star Wars. Watts said she loved working with the up-and-coming actress. “She’s just terrific,” Watts gushed. “It was an exciting thing to see her take on this role because she’s come from the Star Wars world, and obviously she’s able to play a strong young women. But here you see other things come about, like her ethereal quality, those deep soulful eyes. She’s fierce and bold and humorous and just highly spirited, and I saw it play out every day, and I just loved watching her.”

Her role in the Game of Thrones prequel

The elephant in the room when talking to Watts is her role in HBO’s upcoming Game of Thrones prequel series, which is shrouded in utmost secrecy. But the similarities between the ageless worlds that William Shakespeare and George R.R. Martin have created did afford a small opportunity for comment. “Game of Thrones is a phenomenon,” Watts explained. “It’s amazing how that has just swept up the entire world, every type of demographic you can imagine. People are obsessed with that show. And it does feel like it taps into the world of Shakespeare. That’s what’s so exciting. We love to go back in history and even fantasy, and imagine how society evolves or has not evolved.”

As with Ophelia, which was brought to life mostly by female creatives, the Game of Thrones prequel series will have a woman at the helm with Jane Goldman. That means we can likely expect even more in-depth looks at complicated, important women from mythical history. After Watts’ terrific work in Ophelia, we can’t wait to see what she’s able to do in Westeros and beyond.

Ophelia opens in theaters on June 28 and will be available on VOD on July 2.