Since Iron Man kicked off the MCU, Marvel Studios’ Kevin Feige have been drawing on decades of classic comics for inspiration. Sometimes it’s a whole storyline, like how the ’90s event series The Infinity Gauntlet inspired Avengers: Infinity War and Endgame. Often though, a single panel from a comic book has provided creators direct inspiration for some of the best sequences in the MCU.

Now, Marvel Entertainment’s YouTube channel has uploaded a video with side-by-side comparisons. We get to see the comic book moments with the movie sequences they inspired, from MCU Phases 1-3.  You can check out the full video below:

The video clearly shows how Marvel Studios pulled from all eras of the comics. Comic book panels from 1941 directly influenced scenes in Captain America: The First Avenger. And a lot of comics from the ’80s and ’90s were great source material. Even Marvel’s Ultimate Comics line from the early 2000s, showcasing an alternate world of heroes, was a big source of inspiration. In that world, Nick Fury happened to be drawn to look like Samuel L. Jackson.

Cool as this video is, there are one or two big omissions. Amazing Spider-Man #33 from 1966 contains a scene of Peter Parker trapped under a metric ton of rubble. It takes all of his strength of will to get out. This moment receives a direct re-creation in Spider-Man: Homecoming. 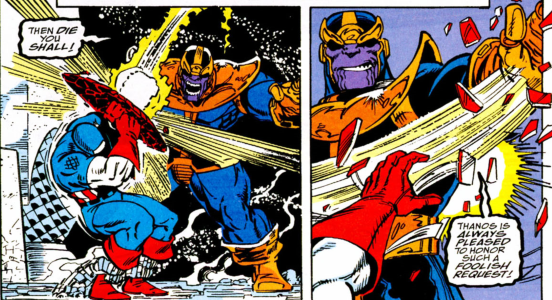 Infinity Gauntlet‘s epic brawl comic book between Captain America and Thanos is missing too. Back in the day, comic book readers witnessed the Mad Titan demolish Steve Rogers’ shield with ease. We see this reimagined for Endgame. A few examples aside, it’s hard to argue that Marvel’s video isn’t rather comprehensive. It’s a great example of the comics moments that helped inspire some of coolest scenes in superhero movie history.