Is September the new October? Halloween excitement appears to be exceptionally high this year, even a month early. Now, LEGO Star Wars joins the fray with five new adorable Halloween shorts. These are absolutely Halloweeny, but not very scary at all. And no, they aren’t related to the upcoming LEGO Star Wars Special, LEGO Star Wars Terrifying Tales. We need to wait until October for that.

No, these shorts are anything but terrifying. But they do get us in the spirit. And they feature some of our favorite Star Wars friends from the recent Disney+ shows.

It’s a decorating contest for Boba Fett’s starship as Boba and the Mandalorian keep trying to one up each other with wild and creepy designs. However, an expected winner emerges to put both Boba & the Mandalorian to shame with their design. Watch the video to find out who wins the competition, if you dare!

Oh, we dare. And trust us, you won’t be sorry if you do. The short features all the greatest hits of Halloween decorating. This includes jack-o’-lantern, ghost sheets, and even TP. A beautiful collection.

Next up is “Celebrate the Season: Trick-or-Treat.” This LEGO Star Wars Halloween short is not to be missed:

As the Mandalorian searches door to door for Grogu in Moff Gideon’s light cruiser he comes across something… unusual. The Stormtroopers are celebrating and handing out candy. Will the Mandalorian be able to find Grogu despite the Halloween festivities?

Will he? Spoiler alert: Yes. Will we swoon from the adorable, also… Yes. We hope Grogu always has as much Halloween candy as he wants. 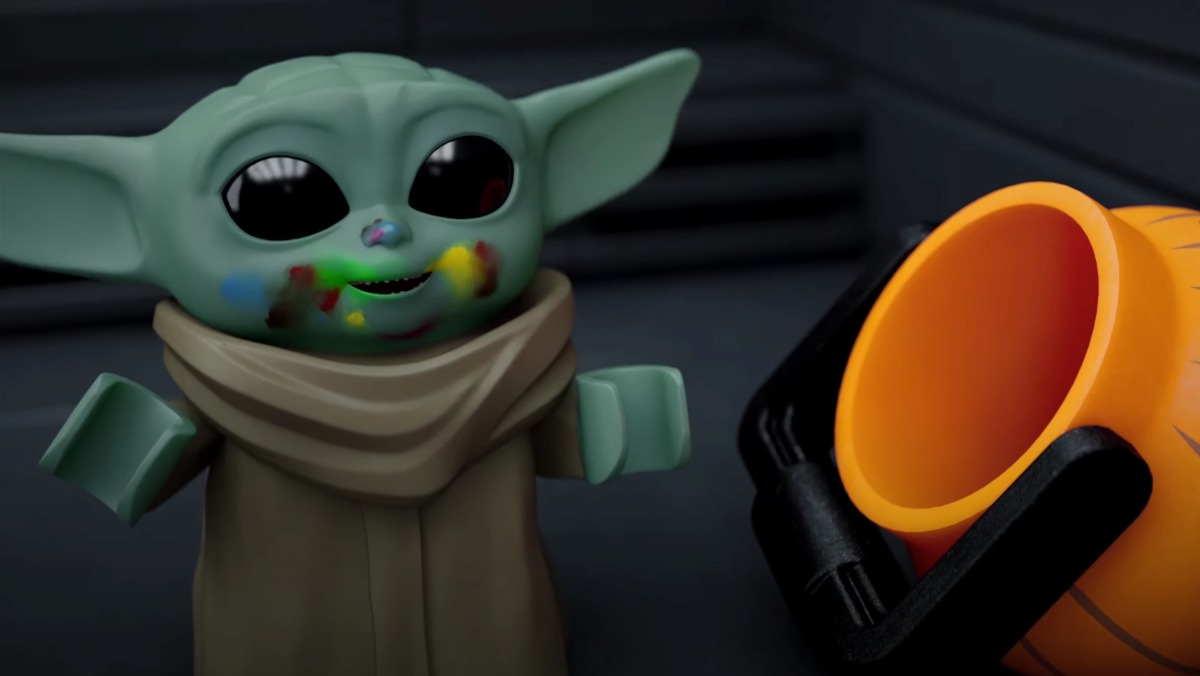 We’re not crying. You are crying.

But there are many LEGO Star Wars Halloween shorts to watch. The next one is titled “Celebrate the Season: Carving Up the Competition.” Its description reads:

The answer to this may not surprise… Nor the eventual outcome.

As Moff Gideon and Stormtroopers play cards aboard his light cruiser, strange ghostly happenings terrify them. The Mandalorian and Grogu also happen to be sneaking around the ship… so is it really haunted? Find out!

Well, no scares here. But much adorableness.

Finally, the shorts conclude with “Celebrate the Season: The Pumpkin Batch.” Not to be confused with the pumpkin patch.

In a scary pumpkin patch, the Bad Batch take out battle droid guards in order to retrieve pumpkins for a grateful village. All seems to be going according to plan, until an old friend shows up to spoil the fun.

Who could the old friend be? You’ll have to watch to find out!

These five shorts offer us Halloween perfection. Just the right amount of nostalgia, creeps, and delight! More treats than tricks, but that’s the sweet part about it! Watch the full compilation of all the LEGO Star Wars Halloween shorts, if you dare.