The Top 50 Halloween Candies, From Worst to Best

What do democracy, the Renaissance, and the Apollo Space Program have in common with Halloween? They are some of mankind’s greatest achievements. Once a year, we honor the macabre with a holiday that revolves around ghosts, monsters, death, and wearing absurd costumes. It’s such a good and pure idea that a big part of the celebration involves letting children take candy from strangers. And nothing is better than free candy. Nothing.

But which Halloween candy is the best of the best? To find out we’re doing what we do best—ranking them. 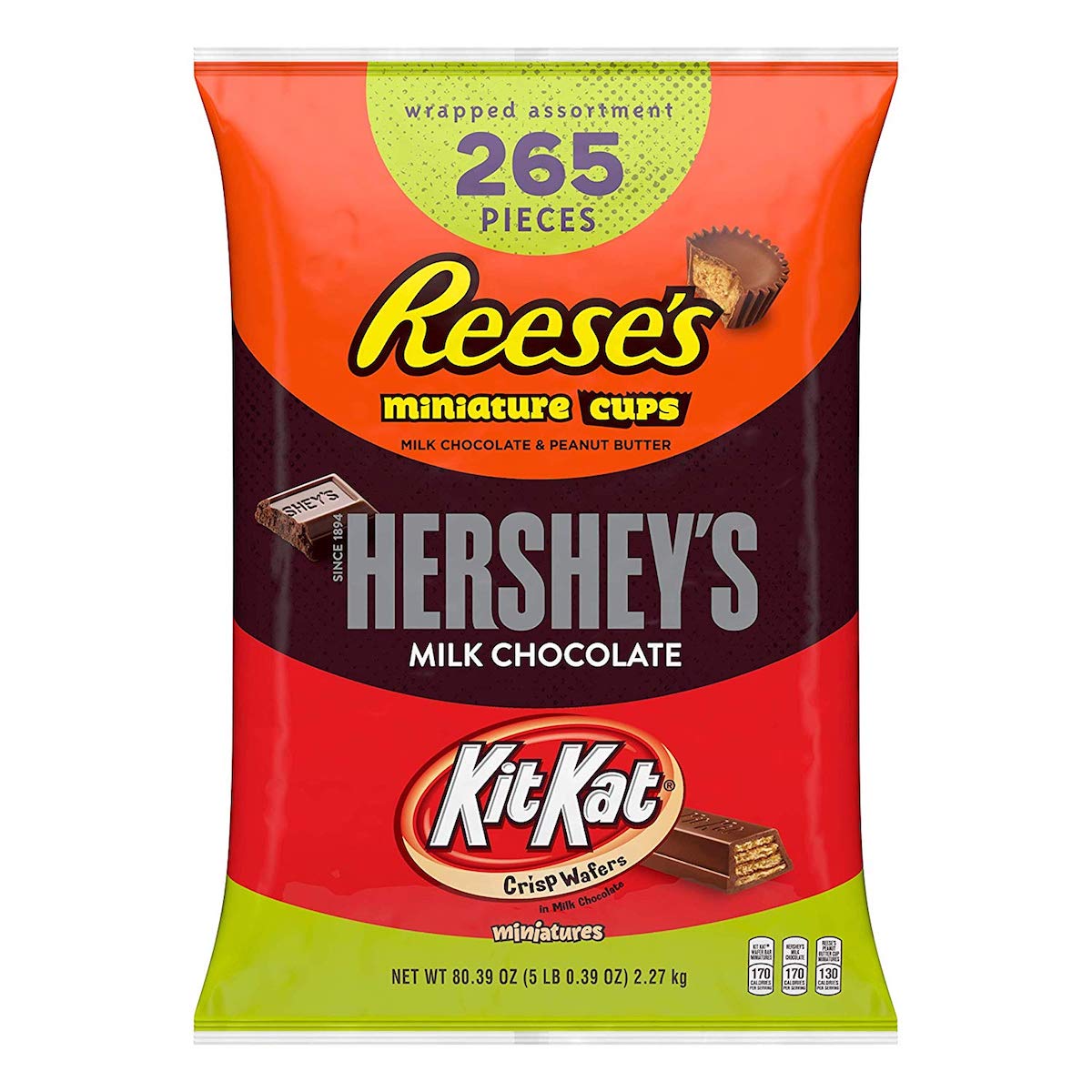 Criteria: We are only including established sweets that have been handed out to trick-or-treaters for more than a decade, so nothing new (i.e. any Snickers variations). They also need to be available in most Halloween mixed bags. And since this is Halloween-specific, we’re judging them on how good they are in single serve, “fun-sized” form. This is not a list about the best candies; this is a list about the best candies that get placed in a plastic pumpkin by our weird neighbor. That eliminates sweets that are not typically found in smaller portions, like Goobers, Skor, 5th Avenue, or Clark bars. We’re also omitting gum, because no one should give out gum on Halloween. Or apples. Or toothbrushes. Just give the kids candy what is wrong with you?

Also, Circus Peanuts aren’t here because no one hands them out on Halloween night. Otherwise they would rank just above Styrofoam. 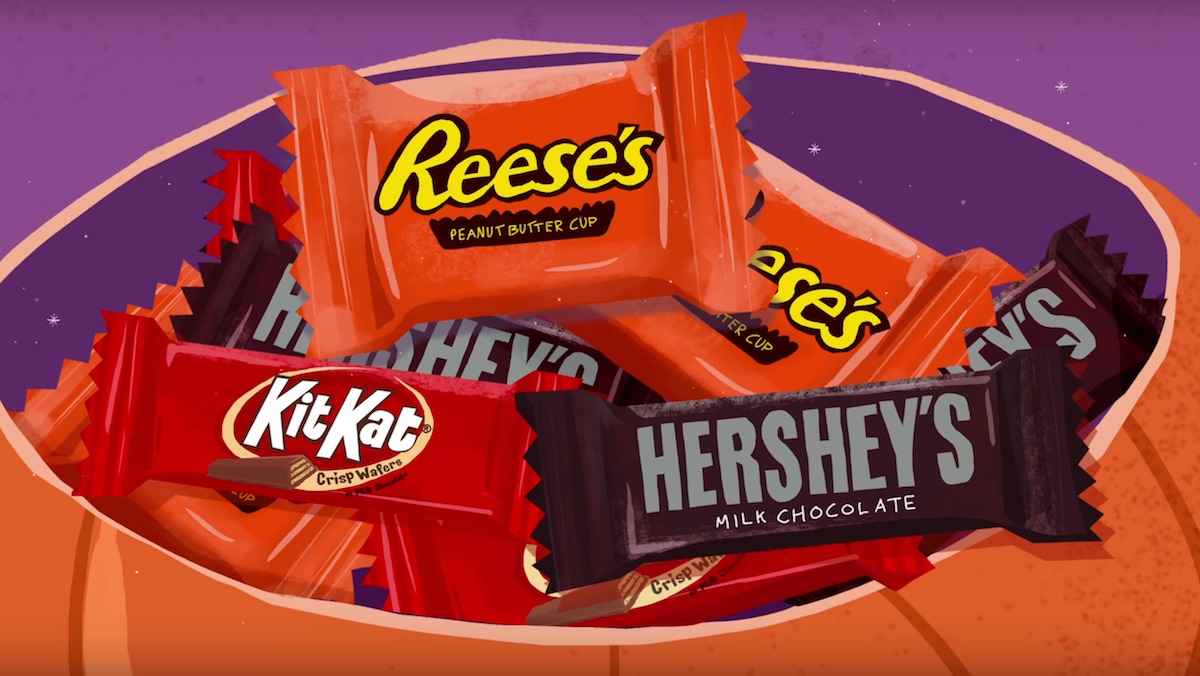 Basically soft stretchy rubber that is edible but overly sweet. 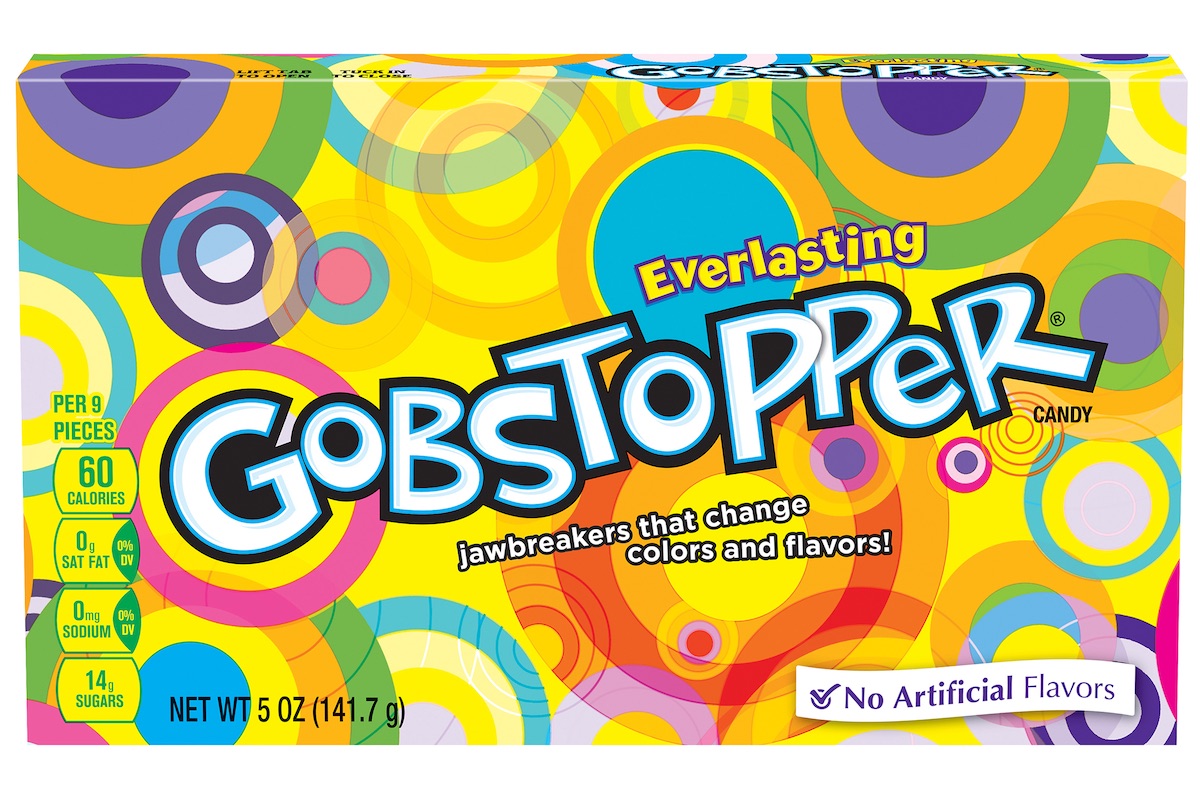 They’d be fine if the movie Willy Wonka hadn’t made them seem so much cooler.

Way too much caramel. Even a tiny piece is exhausting to chew.

Stupid gum sneaks on to the list inside an average lollipop that also doubles as a choking hazard for younger kids. 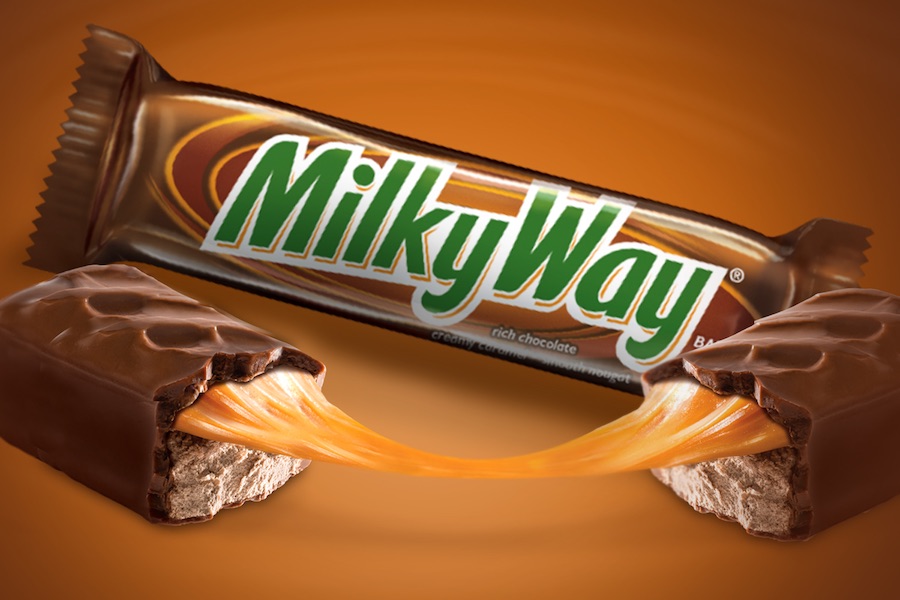 The U.S.’s version of a Mars bar should make the British feel better about the outcome of the American Revolution. The most disappointing combination of caramel, nougat, and chocolate in any country.

For aquarium rocks they’re actually pretty good, but there’s a reason no one eats them until there’s nothing else left in their Halloween bag.

Flavored chalk that is somehow way too hard even though it instantly disintegrates in your mouth. And they come in little tiny discs, that way when you drop one it disappears under your couch or fridge forever.

Enjoyable for roughly 30 seconds. When that owl says it takes three licks to get to the center he just means that’s how many licks before you throw it away.

Warheads, for when you want to take sour to the extreme….because you’ve had too much of the delicious candy that is enjoyable and you need a weird palette cleanser so you can get back to the good sweet stuff.

Good: the taste. Bad: way, way, way too chewy. A single Tootsie Roll is all you need. 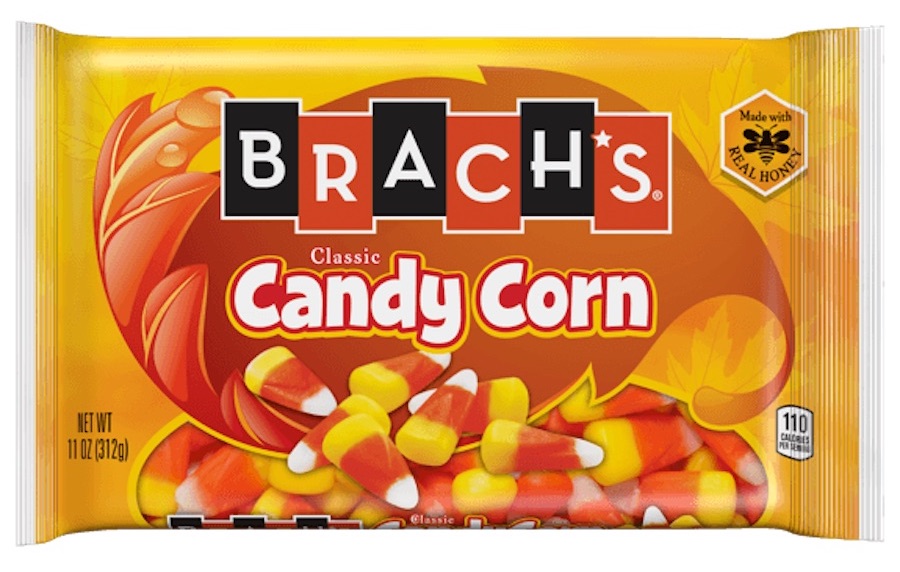 Some people love it, others hate it, so let’s have an honest discussion about candy corn: it tastes fine, but it’s way too chewy/rubbery.

Whew! Glad we finally had that painful conversation, but at least now we can heal and come together so we don’t have to arguing about candy corn every October.

Rolos tastes good, but would be better with a higher chocolate-to-caramel ration. A little more of the former and a little less of the latter would really help.

The name might not be all that creative, but these sweet and sour candies are still really good and have a much better consistency than similar candies like Bottle Caps or Smarties.

Good enough that banks and doctors give them out all year. Their smaller size also make them easier to eat, and there are a lot of flavors.

If you don’t like English toffee you don’t like Heath bars. But what kind of weirdo doesn’t like toffee. Skor is the superior candy, but—as noted in the section you definitely didn’t skip, right?—rarely come in fun-sized form. Heath bars should be thinner.

Sweeter than most hard candies and fun to mold with your tongue as you finish them, Jolly Ranchers are fantastic. Just not in a Halloween bag. You can’t “eat” a Jolly Rancher in a frenzy as you rip through your stash, which is why they rank lower than they would in a regular candy list. 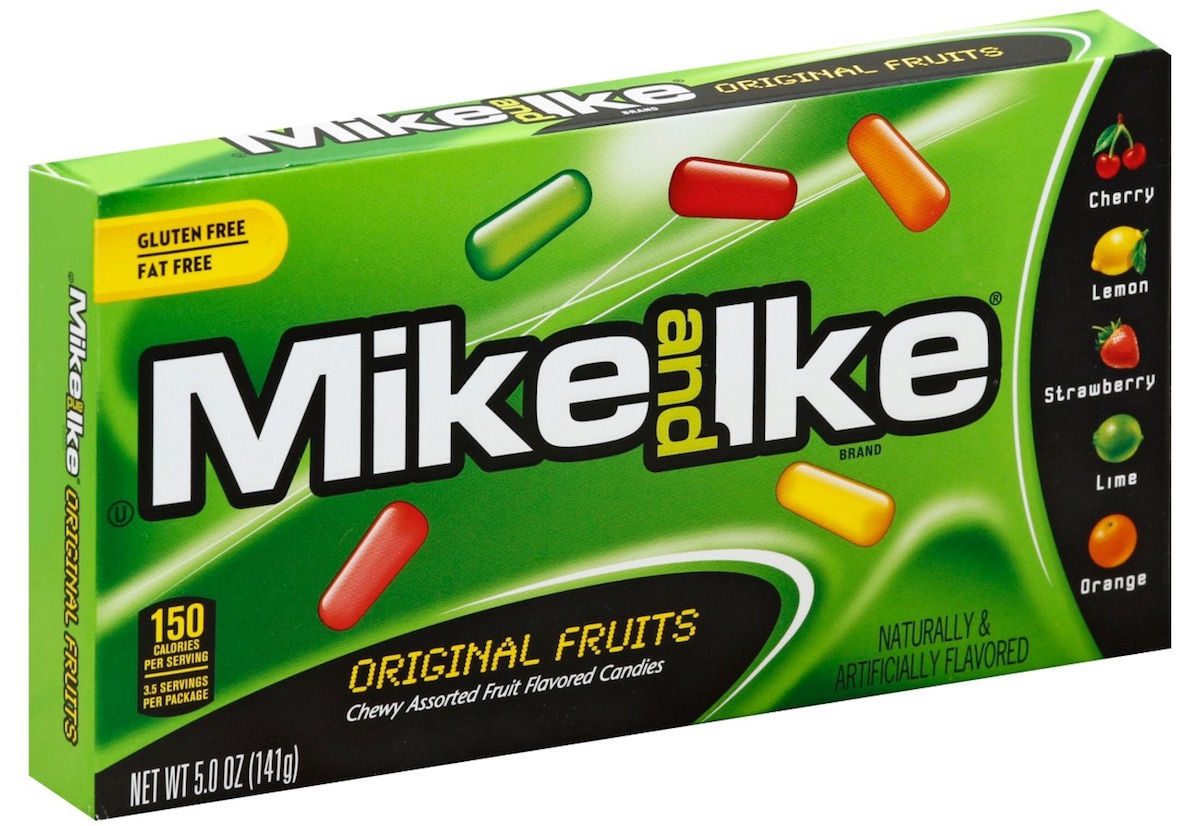 The slightly weird cousin to a jelly bean, Mike & Ike are the easiest “chewy” candy to chew, and come in a nice variety of flavors.

Round little balls of (slightly too) chewy chocolate-covered caramel that has a nice ratio and flavor, Milk Duds are underrated.

No one buys Twizzlers when they want candy, but if you are in someone’s home and they have them you want 40 (even if they are sort of like sweet edible plastic). So getting them handed to you on Halloween is ideal.

“Malted milk balls” sounds like the most ’50s candy ever, but Whoppers taste good and have a nice crunch. A few go a long way, making these one of the few candies better in Halloween-sized portions.

No bonus points for saving lives, just for being a delicious soft chewy mint covered in dark chocolate.

What makes a Crunch bar better than a Krackel is a more solid chocolate with additional crisped rice. It’s a more satisfying candy to eat, and it tastes better too.

Yes, the stretching of the flavored-nougat can be messy, but it’s also really, really good.

Has anyone ever purchased an entire Fast Break, or do they only come in mixed Halloween bags? Scientists are working on the answer. In the meantime this member of the Reese’s family combines peanut butter, nougat, and chocolate into a soft, delicious treat.

The only white chocolate trick-or-treat staple is essentially a reverse Oreo in bar form. What’s not to like? (No one wants to hear from the anti-white chocolate lobby, thank you very much.) 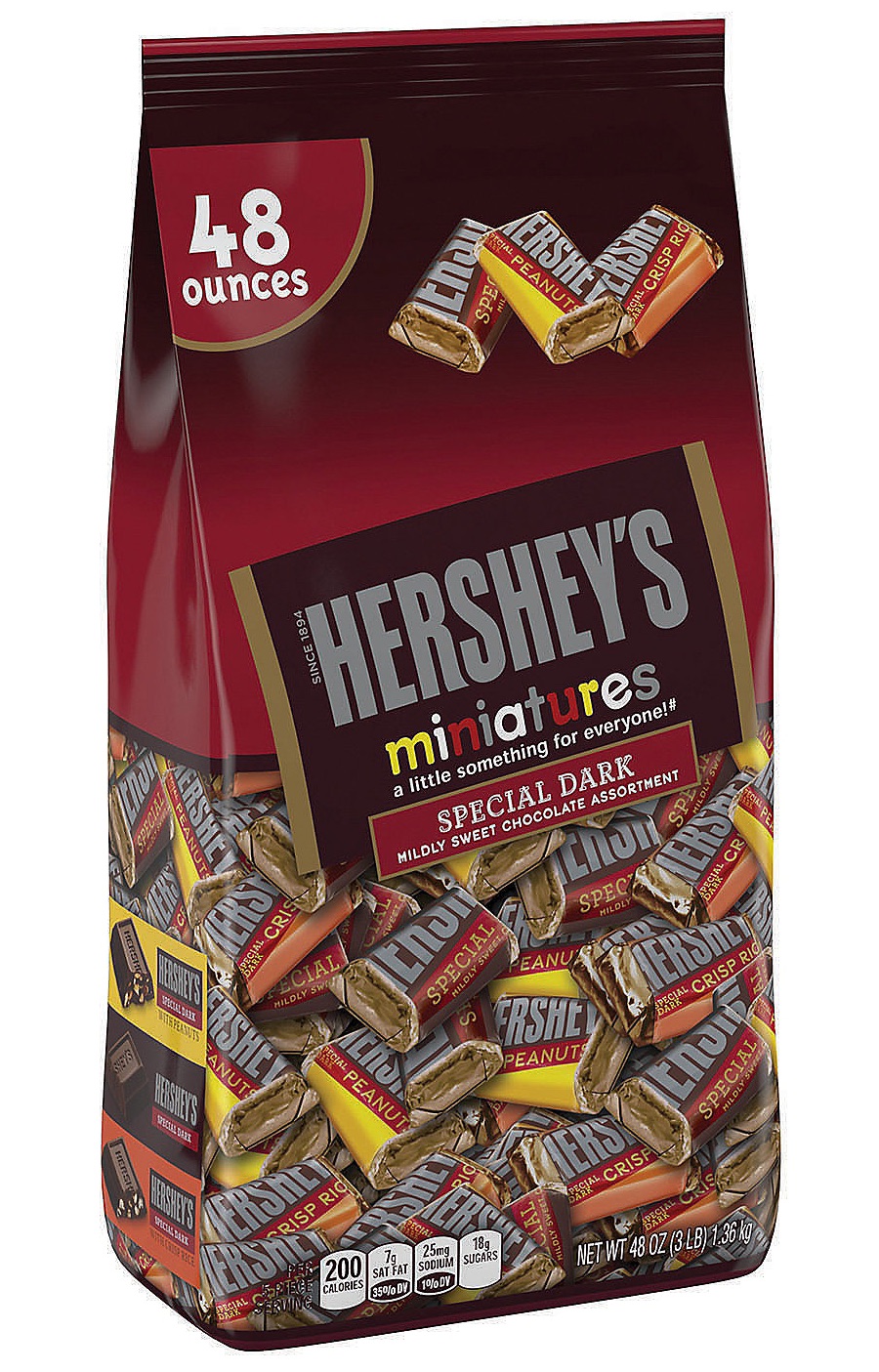 This Hershey bar with peanuts and a softer chocolate is simple and delicious, but ranks lower because in fun-sized form it’s not as satisfying. The full bar is a better bite. 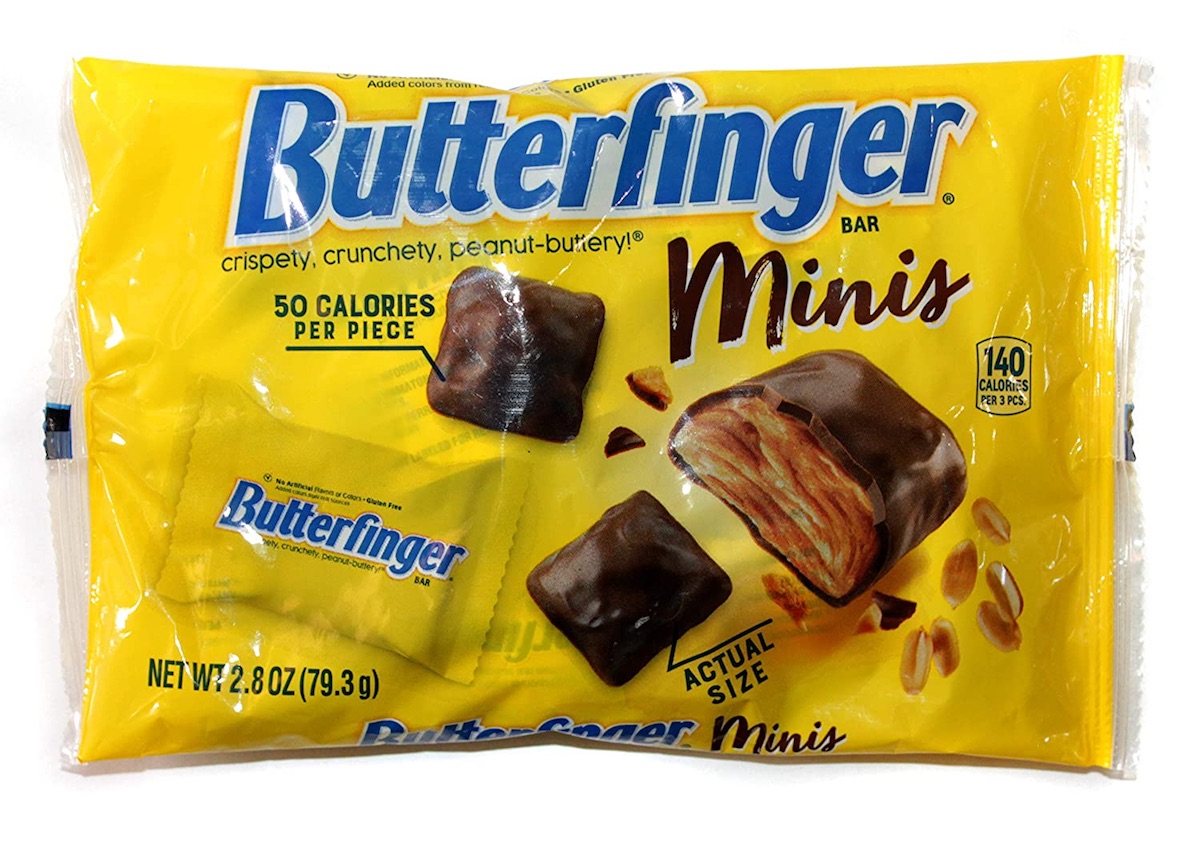 On its own the phrase “crispy peanut butter” is horrifying, but it’s fantastic in a Butterfinger, which is unlike any other candy bar. Butterfinger is inherently dry for chocolate though, so less is more; the smaller Halloween portion is better than a full bar.

This ranking might seem high, but remember, this is Halloween candy. The smaller York Peppermint Patties have a better consistency and a higher ratio of chocolate to their full-sized versions. They also might be the most refreshing candy.

The fact you can get a double yellow pack knocks Starburst down a few spots, otherwise they are what taffy wishes it could be when it’s honest with itself.

Some people say they don’t like milk chocolate and a regular Hershey’s bar is boring. These people are monsters. Imagine giving one of these, even a tiny Halloween sized version, to someone in the year 1400. They would have named you their god like the Ewoks with C-3PO.

The right kind of chewy, all flavors of Skittles tastes good. Fun-sized portions are perfect too because no one wants to eat a full bag (they grow cloying after awhile), yet no one wants to share them either.

Salted peanuts held together by a soft caramel. As the kids says, “That’s it. That’s the tweet.”

The ratio of chocolate to peanut butter is great, with the Mini Cups arguably giving a more satisfying single bite than their larger brethren (which are still better on the whole).

Shredded coconut should be in way more candy, because all you need to do is cover it in chocolate to make it amazing. (But, uh, why is the one without the nuts called “Mounds?”) 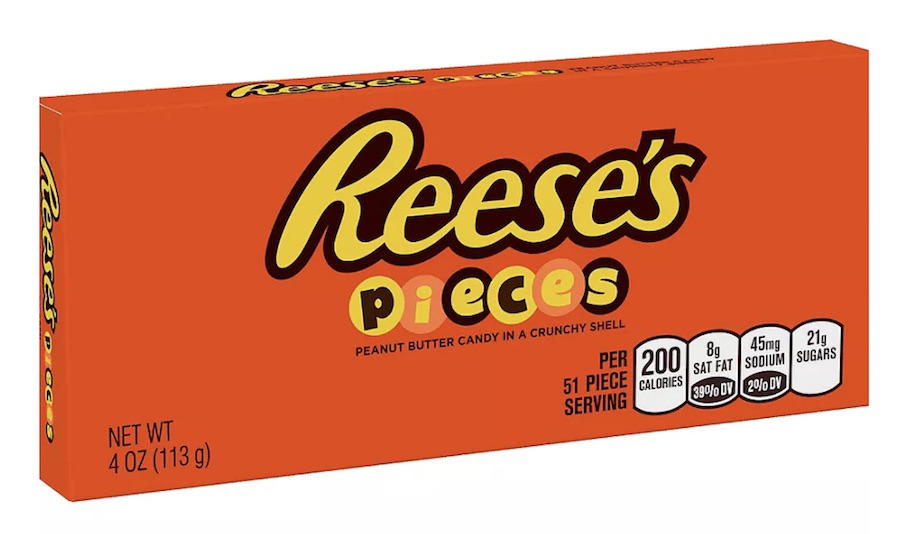 Reese’s Pieces are soft and wonderful. The biggest problems are a) no one can agree on how to say “Reese’s” correctly and b) you can eat a million of them, which make those tiny Halloween bags frustrating.

Best use of raisins ever. Even better than the band The California Raisins, which is truly high praise. Chunky bars are somehow both solid and soft, and peanuts are the best crunch in all of chocolate.

Peanuts and nougat are obviously a fantastic combination, but what makes a Baby Ruth great is its use of caramel. It gives the bar a nice sticky consistency. Baby Ruth should be more popular than it is, in both Halloween and regular form.

Also, it makes us think of these two.

Sour Patch Kids have the ideal ratio of sweet and sour. Chewier than most gummy candy, but still soft enough not to make you feel like you’ll lose a filling if you eat a bag.

The best texture and taste of all the gummy candies given out on Halloween, which is also the best version of Swedish Fish, since a whole bag……nah, who are we kidding? We devour the full bags too.

A crunchy cookie covered with caramel and chocolate, Twix bars are even better frozen. That actually hurts its Halloween ranking, because after trick-or-treating no one wants to wait to eat their candy.

The best-tasting nougat of any candy bar, 3 Musketeers are soft, light, sweet, and wonderful. Easily one of the best American confections.

Shredded coconut with almond, wrapped in a sweet milk chocolate? Oh yeah. I wish I could bathe in Almond Joys.

Kit Kat is a delicious, crispy chocolate cookie that is lighter than almost every other great candy. The best part about getting a smaller version on Halloween is no one asks you to share with them. Sharing a Kit Kat helps get you into The Good Place.

The best M&M now and forever, they take everything great about the regular M&Ms and add a crunch that makes them so much more enjoyable to eat.

If we were ranking candy under normal circumstances, Snickers would be the clear and easy number one. It’s the perfect chocolate bar. It has nougat, caramel, and peanuts, all in a perfect ratio. You simply cannot make a better candy. But the small sizes given out on Halloween are not as satisfying as a full-sized one.

The only candy that beats it on that spookiest of nights doesn’t suffer from the same problem.

Delicious peanut butter encased in the perfect amount of chocolate so it’s thin and soft on the top and bottom, but thick on the edges. “They should have sent a poet.”

The truly best houses on Halloween give out Reese’s Peanut Butter Cups to trick-or-treaters.