On a Friday evening in 1994, a movie about dinosaurs blew my mind. Home alone during a Midwest thunderstorm that shook the walls of my family’s home, I put a movie called Jurassic Park into the VCR. I didn’t know the movie’s plot except that it involved dinosaurs, but I quickly became riveted to my screen, scooting closer and closer to the small TV in my bedroom. The storm raged outside, and rain began to fall in the movie, too. When everyone realized the Tyrannosaurus rex had, in fact, eaten the goat, I remember the fear that shot through my veins. Jurassic Park made my young self feel terror, wonder, and awe. And no Jurassic sequel has recaptured that cocktail of emotions for me—not until Universal Orlando’s Jurassic World VelociCoaster. 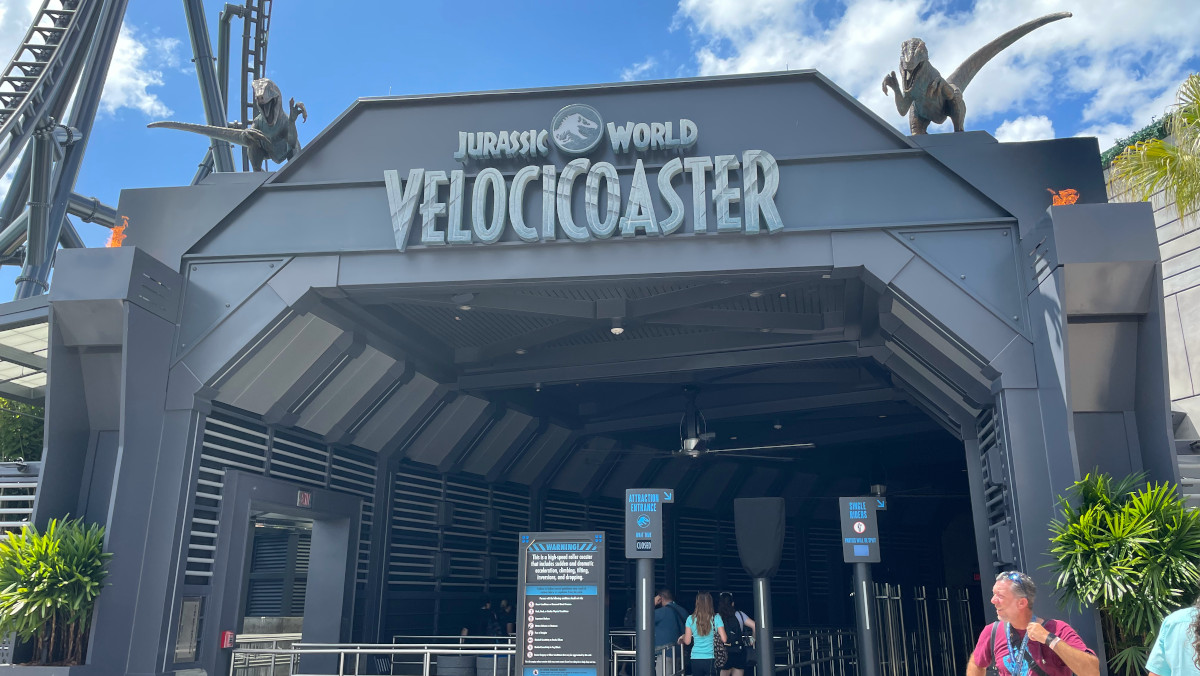 Though not a film, the new attraction at Universal’s Islands of Adventure does take place within the Jurassic World timeline. An over-the-top thrill ride, the VelociCoaster weaves together dramatic roller coaster elements with raptors—the most spine-chilling part of any Jurassic movie. The ride launches to 50 mph in three seconds. Inversions, a super acceleration through the raptor paddock, a 100 foot long stall, a 360 degree roll so close to water you feel like you’re going to fall out and touch it… VelociCoaster does it all. Shrill raptor shrieks punctuate the experience, as does the occasional raptor appearance. The scary roller coaster design combined with equally scary dinosaurs made the VelociCoaster unforgettable. Even for me, decidedly not a roller coaster or thrill ride person.

Universal Creative art director Gregory Hall said working within the Jurassic franchise was a dream come true. “We worked together to figure out the DNA of Jurassic, the essence of it. And we came up with these three categories: teeth, thrill, and environment,” he shared 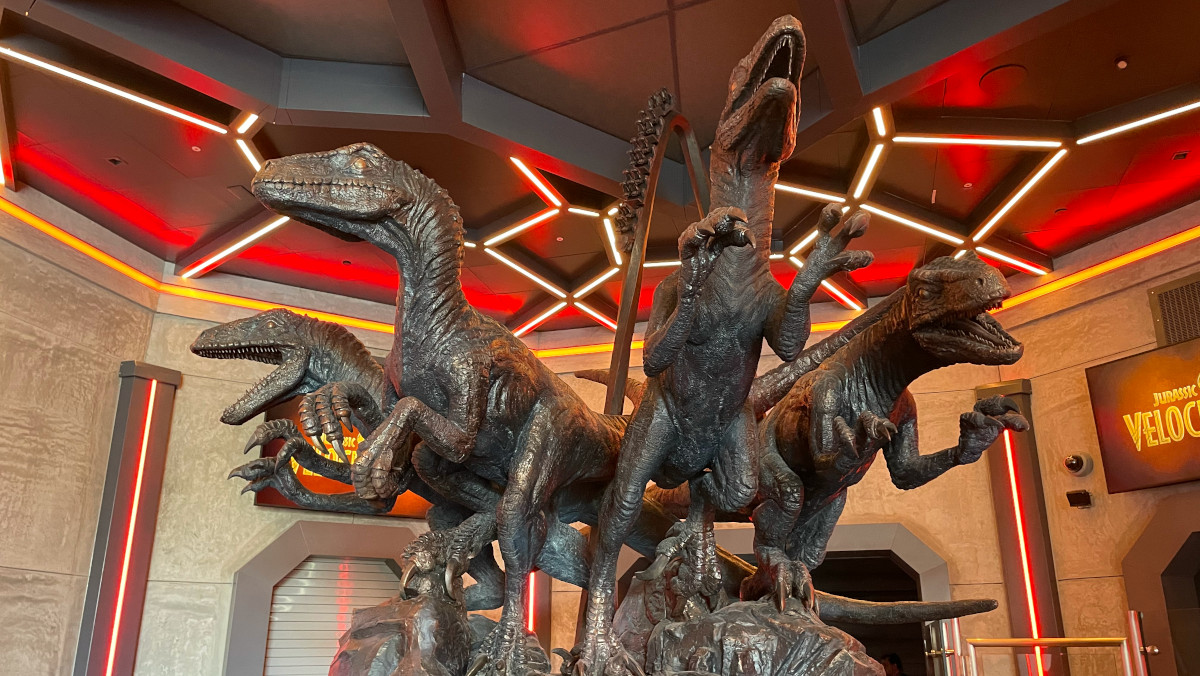 The teeth of VelociCoaster obviously belong to the dinosaurs. Hall joked, “You need dinosaurs in a dinosaur ride. And it was a great opportunity because we talked with the filmmakers, Amblin Entertainment, and Universal Pictures.”

Universal Creative show producer Shelby Honea added that the Gyrosphere in Jurassic World nudged them towards the raptors. “We really studied the first Jurassic World film. When we looked at the Gyrosphere ride, we actually saw some storyboards that indicated that, at one point, maybe the Gyrosphere ride would go into the raptor paddock. That really got our creative juices flowing. We know, in the first film, Claire Dearing is under a lot of pressure to add more teeth,” she said. “So we created this idea, and the filmmakers were really supportive of this, that this is actually a carnivore expansion. So Claire was like, ‘All right, these raptors are great. We’re going to put a roller coaster in the raptor paddock, giving guests that up close animal encounter as part of this carnivore expansion.'”

In the queue, Claire and Owen explain the concept of the coaster to guests to make the experience more authentic. The VelociCoaster’s story takes place before the events of Jurassic World; it’s a time when the park is safe with normal operations. And Honea said Colin Trevorrow and Frank Marshall were intimately involved early on as they developed the story and then through weekly check-ins.

As for the thrill, it’s a roller coaster. Hall said they focused on the crazy maneuvers and layout. They set the bar high for innovation. Hall shared that many members of the team love roller coasters; the operations manager has been on some 670 roller coasters.

Honea added, “From a coaster experience, we have a really exceptional in-house designer. His name’s Keith McVeen. He knows thrills and he knows g-forces. Kevin knows all of the aspects of an exceptional coaster, and he really studied the choreography, the pacing of this attraction. And I think he knew in his head these certain inversions that he really wanted to make happen. Really it almost comes together like a big puzzle, like okay, we want to do an Immelmann loop. We want to do a barrel roll over the water. We want an inverted stall. We want a top hat, and then finding the best way to utilize our site, as well as deliver on those thrills and those feelings we want our guests to experience.”

All of the puzzle pieces come together for nine different elements in just a few minutes of ride time. 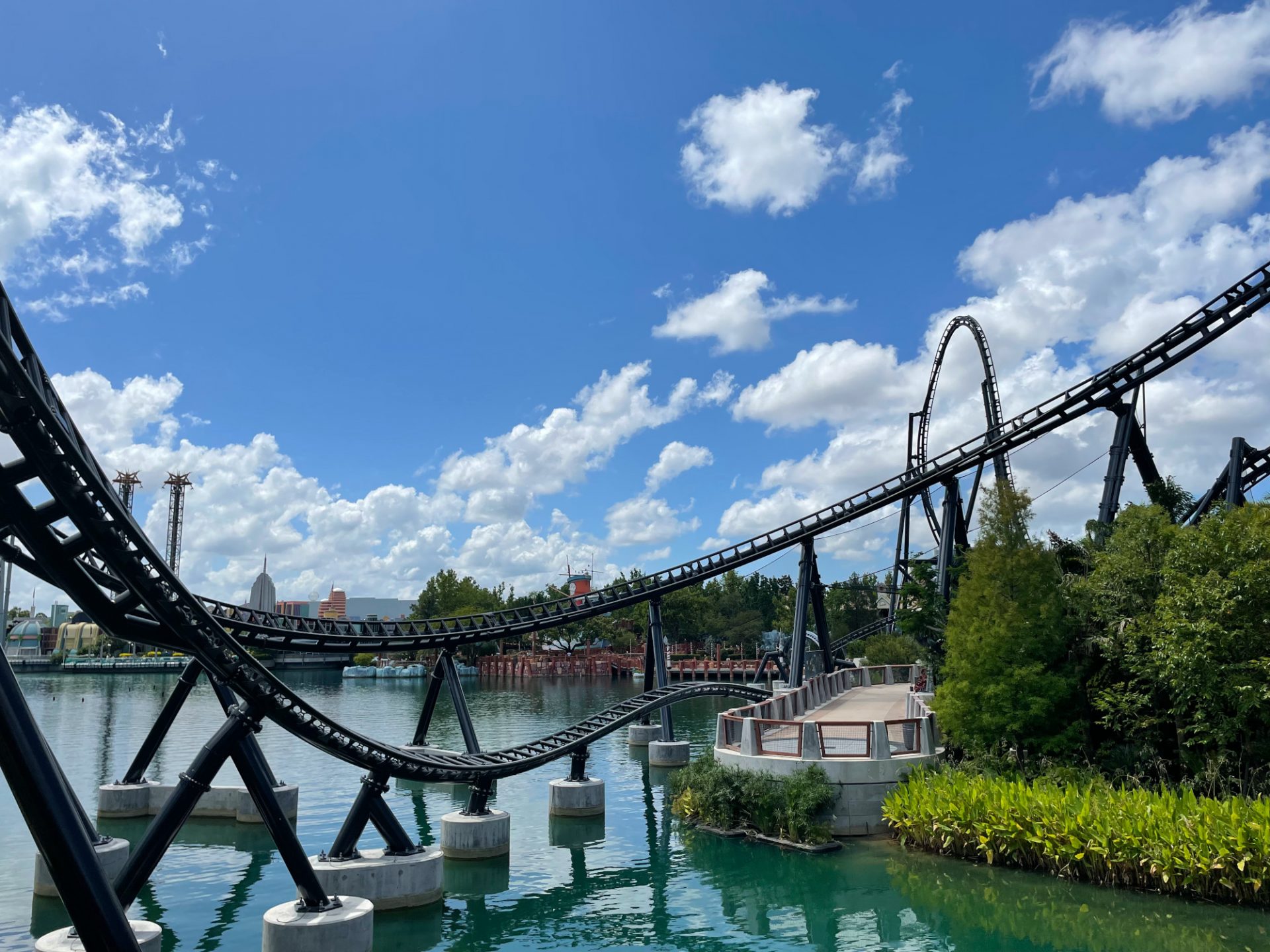 The VelociCoaster’s tracks loom over imposing rockwork and a lush tropical setting. And the natural growth of the surrounding foliage and trees adds to the immersion. You really do believe it could be an actual raptor paddock. Especially as you wind through the queue with animatronic raptors. It feels as through you’re walking underground to the paddock.

Hall said, “We realized that this is the first time in Jurassic history that the raptors are actually on public display in the park before they’re in the movie. So we considered: how would they be on public display with a roller coaster in the paddock? And how can you go into a deeper dive of the back story of those raptors. Such as how they came to be and what tools and items are there that they were raised with, and what was used to take care of them? So all that’s in the queue, as well as some deeper dives into the story from the movies.” 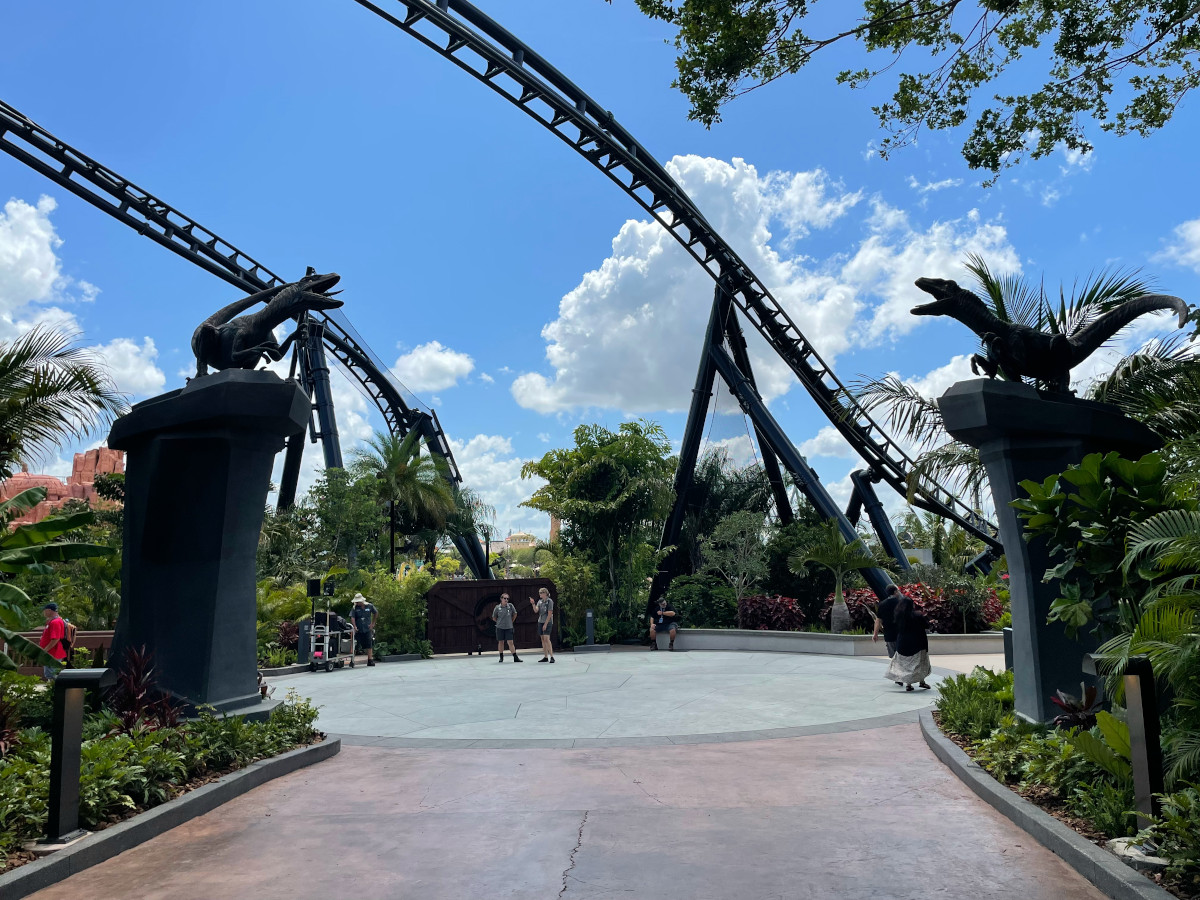 If you’re a fan of the Jurassic films and roller coasters, then the VelociCoaster awaits you. But if, like me, you try to avoid aggressive rides at all costs, consider it. The VelociCoaster delivers the kind of feelings that made Jurassic Park special.