On the fifth installment of his “Coronavirus” series of Last Week Tonight episodes, host John Oliver focused on misinformation in the media regarding the ongoing pandemic. And while the coverage was just as gloomy as that of previous episodes, he did discuss a few rays of hope. Or at least the possibility of some promising research that still needs to undergo a lot more study before it can be considered effective.

Oliver’s Coronavirus series, which began midway through March, has looked at many aspects of the pandemic, offering the show’s take on which authorities can be trusted (this TikTok hamster earned some especially high praise in that regard) as well as showcasing ways people can make sure they’re washing their hands thoroughly. This time around, misinformation in the media, particularly “from televangelists… the right wing media, [and] President Trump himself” was the topic du jour.

Tonight is our last show until May 3rd! A lot could happen between now and May 3rd. We’re on quarantine time, so in two weeks you could…wow…earn a few master’s degrees? Learn an instrument? No, no, way too lofty. Oh! You could meet someone at a Zoom party!

Oliver called out each one of these personalities and others for offering up easily disprovable facts and obviously faulty cures, with one egregiously incorrect fact coming from “not-a-medical-doctor Phil.” He claimed that 360,000 people die every year from drowning in pools. As Oliver notes, the total drownings are more on par with 4,000 a year (at least in the U.S.). This CDC report notes that “From 2005-2014, there were an average of 3,536 fatal unintentional drownings (non-boating related) annually in the United States… [or] about ten deaths per day.” (Though Oliver should’ve also brought up the fact that, according to the World Health Organization, “There are an estimated 320,000 annual drowning deaths worldwide,” and noted that “not-a-medical-doctor-Phil” may have simply misspoke.)

Oliver’s discussion of hydroxychlorquine and the way it’s been hyped as a COVID-19 panacea in certain segments of the media was another one of the highlights from the segment. He notes that while studies of hydroxychloroquine (an anti-malaria drug) could potentially prove the drug to be an effective treatment for COVID-19, the science is still out on it—at least, according to the National Institutes of Health. 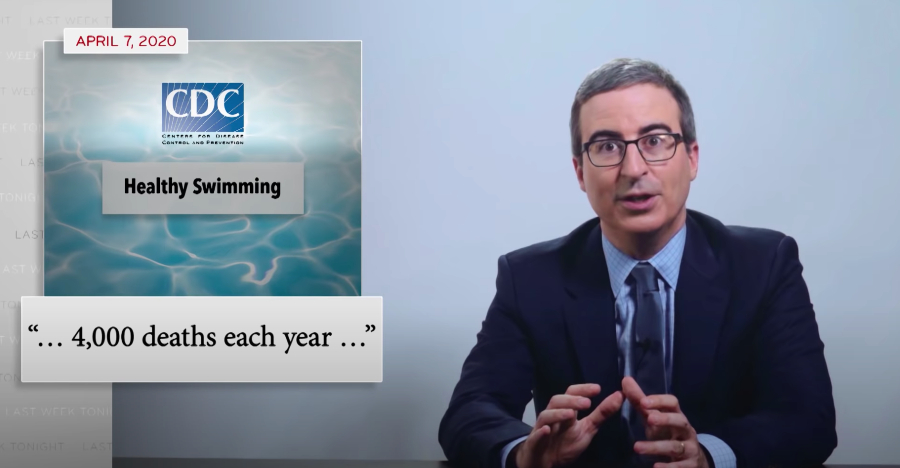 Oliver discussing one of the misrepresented facts he highlighted on the show. LastWeekTonight

“I’d like nothing more than if [hydroxychloroquine] was somehow a miracle cure, but I can’t say it is, and I can’t say it isn’t,” Oliver says. “Because it’s still being tested and I’m not a… doctor. It might, it could, it’s too soon to say.”

What do you think about John Oliver’s latest Last Week Tonight Coronavirus segment? Do you agree that there is a serious problem with misinformation in the media? Let us know your thoughts in the comments!