Spider-Man: Into the Spider-Verse required hundreds of hours of work from thousands of artists and technicians—not just to tell the story of Miles Morales and his fellow Spider-People, but to translate the imagery and energy of comic book panels into fluid, dynamic animation.

Story artist Denise Koyama, a longtime fan of the character since the days of Steve Ditko, created tens of thousands of storyboards borrowing from classic comic framing, action and storytelling in order to create sequences that thrilled audiences and brilliantly brought the characters to life.

At a recent press day for the Feb. 26 digital and March 19 home video release of the Oscars’ Best Animated Feature winner, Nerdist sat down with Koyama for an honest, energetic conversation about the tremendous volume of work that she did in order to help Spider-Man look truly spectacular.

In addition to deconstructing the pipeline for creating (and recreating) shots for some of the film’s most exciting sequences, she talked about her own past and present influences as an artist, and reflected on the opportunity to turn her lifelong passion for comic books into one piece of this film’s revolutionary moviemaking process.

You mentioned that there were 1,750 versions of one sequence you worked on for the film. Is that the most versions of any scene?

Denise Koyama: I don’t know—probably not! There were so many different versions because this was different from our normal process. They could literally change the idea [on a whim]. And so you might be launched on something and you’re like, okay, I’m doing this. And then they’d send a note to change that, or start over and do this thing. So there was a lot of that kind of stuff going on, and lots of different versions.

I’m sure that there’s a certain acclimation process, but is there a point where you’re like, I’ve done this 1,744 times, I don’t want to do it one more!

DK: Well, they rotate us out just so that we don’t get tired and put us on different things. But as your job, I like to come up with different options. So for me, it was like, okay, we’ll try a different option, and it was a lot of fun. I mean, sometimes it’s really hard because you love something and it’s hard to see some of your babies die, but it’s all for the greater good.

Talk about your relationship with the other departments and how you work together.

DK: This is hilarious. I work from home, on a farm, so it’s completely opposite—I feel like somehow I live in two different universes. One is the goat lady of Riverside, and the other one is a story artist in Culver City working with the most amazing artists in the world. And there was a lot of collaboration between Justin [Thompson], who is a production designer, and the division where they’re modeling the buildings and stuff. So most of the time I could figure stuff out in 3D, but for Spider-Man, you have to be very, very accurate in some things.

So they’ll do a whole thing and I’ll say, “I want the camera to do this,” and they could actually go into my program and set up the camera, lens, etcetera, and then they’ll shoot the thing without characters—just the environment. And then I’ll take a couple of still frames from there and then put that into my storyboard to give it a little bit more flavor of 3D. Because sometimes with all this stuff going on, it’s very hard to see how the camera will move when people are fighting upside down and sideways and stuff is moving around.

Which department produced the most revisions for you? In the production pipeline, is it the story that’s constantly changing, or the animation style or technique, or the directing, for example?

DK: It’s always the story idea. The experimentation on this was insane, and so it was constantly changing. So you could be working on something and then we’re starting on something else. Usually you have this timeframe, present [your work], and go to editorial. Here, you have two days to do hundreds of drawings, and I don’t know if you saw the outline, but a lot of it is just, “He goes in and saves the Spideys.” That’s it. There’s only a general location, but sometimes we don’t even have visuals for the places that we’re supposed to do. And so you have to make that up and have like an hour to figure this out before I actually have to actually draw this. So it was a little bit of a challenge. But it was fun.

How much did referencing the visual language of comic books affect what angles and framing to use, in the storyboard stage?

DK: What we would do is several different passes: a straight pass where we do traditional storyboarding and then go, where can we make this more like a cartoon? We’d [put] the paneling in or the action words and stuff and then I would try different things and say, does this work? Does the timing of this work? Is the impact of this better or worse? So we’d go through an experiment and do stuff and then the directors might go, well, that works for the scene, but maybe change it up here or do this here, or maybe it doesn’t work. So there’s a lot of collaboration going on. 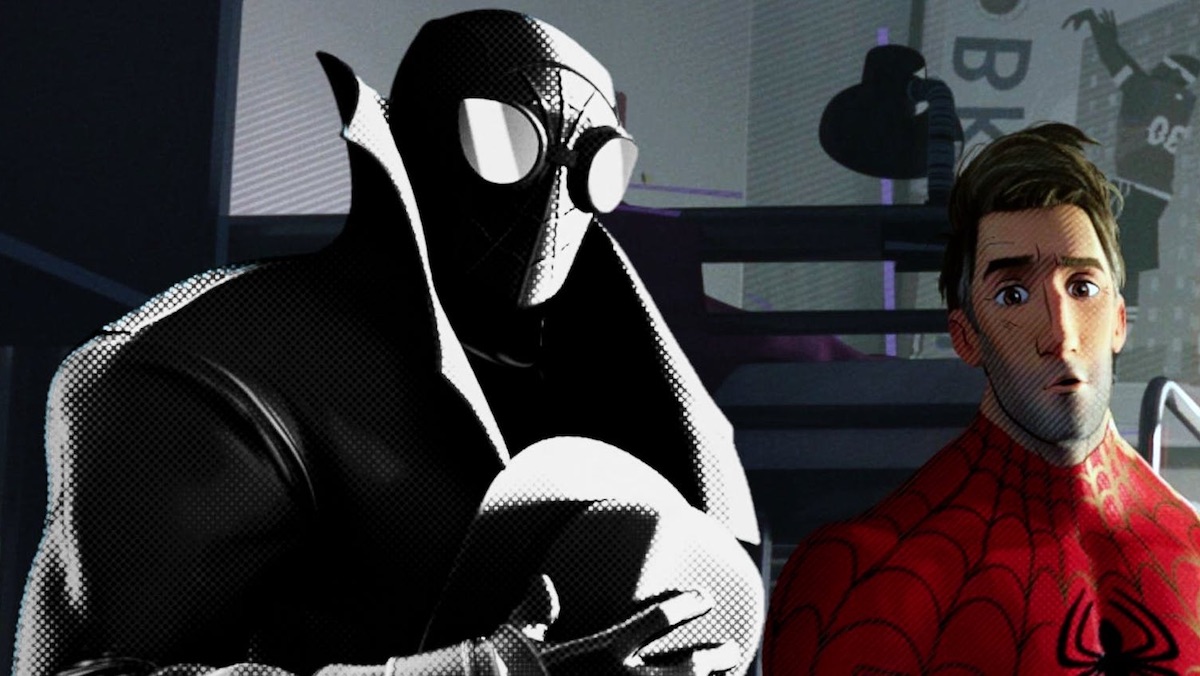 As a big fan of Spider-Man comics, was there a certain action or silhouette or framing that you hoped to sneak into the film?

DK: I just wanted Spider-Man to be fluid throughout the whole thing. The way that Steve Ditko drew him is very fluid. He did a very classical style of Spider-Man, but there’s some beautiful movement throughout the whole form, and Cheyenne contemporized that and made it very fluid and simplified. And so trying to keep that feeling of it, the spirit of it and keep true to that, that was my goal.

Was Ditko the artist that was most inspiring to you during this process?

DK: Because I grew up looking at his work, for me that’s Spider-Man. That’s my childhood, my heart. This is my love for Spider-Man. It’s such a crazy thing to be in your room reading a comic book, and then fast forward to be working on a Spider-Man movie. Like, brain broken—it’s a dream come true!

What was one choice, be it an angle or movement, that made it into the movie that you’re especially proud of, even if nobody else will notice it?

DK: Just being a part of it for me was everything. As a storyboard artist, after you finish it, it’s kind of like you don’t care how the outcome is and how they decide to change it around. But just being part of that whole collider thing with Doc Ock and Spider-Man fighting, that for me was like, yes, I can die happy now!