Top 12 I THINK YOU SHOULD LEAVE Season Two Sketches - Nerdist

Top 12 I THINK YOU SHOULD LEAVE Season Two Sketches

We’ve been waiting for the second season of Tim Robinson’s hilarious Netflix sketch series I Think You Should Leave since almost the moment we finished the first season. It was easily the best thing in 2019, and it gave us some of the wildest, most rewatchable comedy in recent memory. Now season two is here and boy does it live up to expectations. Awkward moments, needless embarrassment, and unending shouting abound.

And even though the entire season is only about 100 minutes total, that’s still plenty of time to give us another round of sketches so weird and hilarious we had trouble breathing. Here now are our picks for the 12 best sketches from I Think You Should Leave with Tim Robinson season two.

Obviously comedy is subjective, but I’m ranking them in order of how much they specifically made me laugh. Your mileage may vary, if you know how to drive a car of course.

The general rule of thumb is any sketch without Tim Robinson in it is 20% less funny than the ones he’s in. However, a few really stood out, and the hyper-violent trailer for the action movie Detective Crashmore is one. Having an old grizzled man (played by an actor whose name, I swear to god, is Biff Wiff) as the lead of an action movie is funny enough, but the kind of lazy, fifth-grade swearing he does while gorily shooting criminals is just so delightfully stupid. “You f***ing suuuuuuuck!” is definitely not as compelling as “Yippee Ki-Yay Mothaf***ah,” but it made us laugh a lot. Oh, and twist ending, the old guy playing Crashmore is actually Santa Claus.

Should be noted, we’re just specifically talking about the trailer. While the follow-up press junket sketch is fine (“Cosmic Gumbo” is a hilariously dumb phrase), it doesn’t pack nearly the punch of the trailer on its own.

Sketches within sketches are an I Think You Should Leave staple, and the cold-open from episode four is one of the best. It stars Paul Walter Hauser as a guy at a poker game with a bunch of other dudes. Each takes in turn to make lazy jokes about their wives. When he does, and his friends all laugh, he immediately feels terrible. We get a flashback to a supremely sweet montage of scenes where he tells his wife he’s auditioned for a play and she’s incredibly loving and supportive. Even when his costar (the inexplicably named Jamie Taco) starts stealing his lines because he can say them faster.

It’s pure I Think You Should Leave logic all the way through, but it also solidifies that the show can do touching and happy sketches amid the embarrassing and devastating.

Another great one-off guest star for this season is comedian John Early as one of 10 people at a fancy restaurant. As they listen to the jet-setting Hal (Danny Nucci)’s stories, it comes time to pay the bill. Rather than split it 10 ways, Hal suggests they play credit card roulette. Everybody tosses a card in a hat, whosever card gets picked, they pay for the whole dinner. As you might expect, despite Early loudly proclaiming how legendary Hal is at fun, when it’s his card that gets picked, he immediately, angrily says he’s not gonna pay. It plays to Early’s strengths as a comedian and is just…so very awkward. 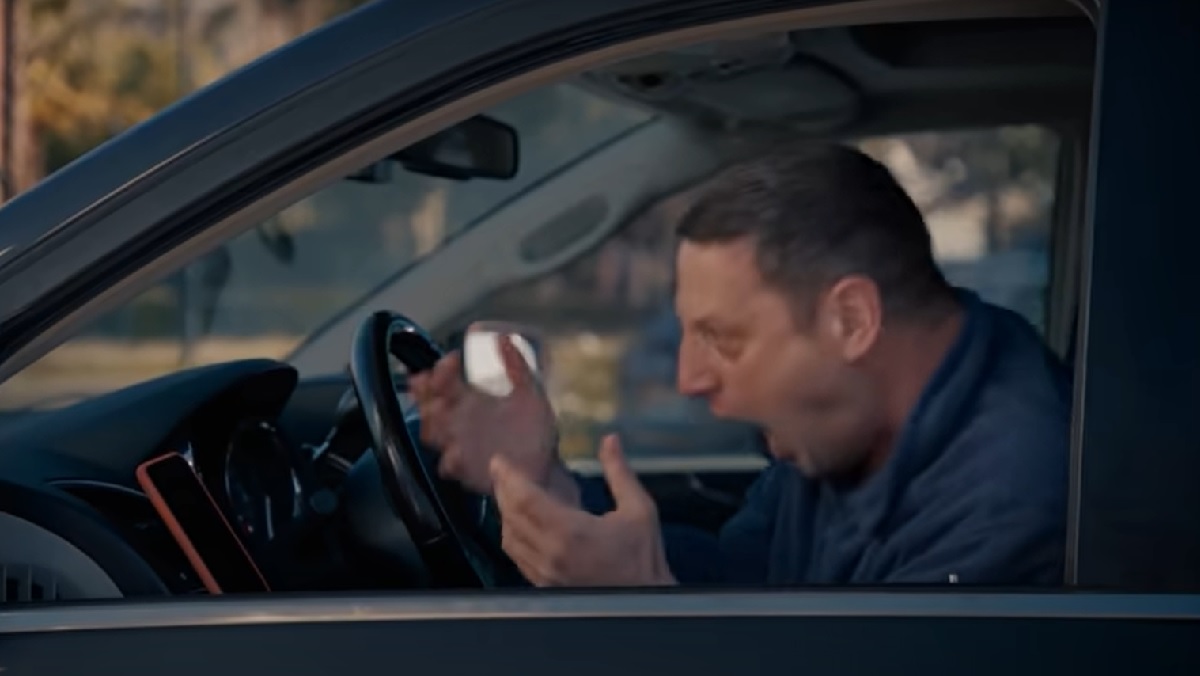 This cold-open is just so stupid I had to include it. It’s a very relatable scene; an already frustrated man tries to leave a parking lot when the slow driver ahead of him blocks his path and won’t move. As he shouts, “Don’t you know how to drive?!” the other drive happens to be Tim Robinson, who tearily says “No, I don’t know how to drive.” Now how he got into the car, even started in the first place, and got where he is is never addressed. But as the sketch unfolds we learn not only does he apparently not know how to drive, he also doesn’t know basic car things. He’s afraid of the horn honking and the steering wheel hurts him somehow? It’s just so much yelling and it starts episode five on a great note.

Another sketch-within-a-sketch. In this one, two business people are on trial for insider trading. The prosecutor reads lengthy text message exchanges between the defendants very clearly showing their guilt. But the turn comes after the first few minutes when the texts start to be about their co-worker (Robinson)’s increasingly fervent defense of his new hat, which is a fedora with a safari hat cape. It’s not really about the insider trading at that point, as Robinson in the courtroom gets increasingly embarrassed by the reading, and we see just how out of hand this hat situation got at work.

7. Dinner with a Professor 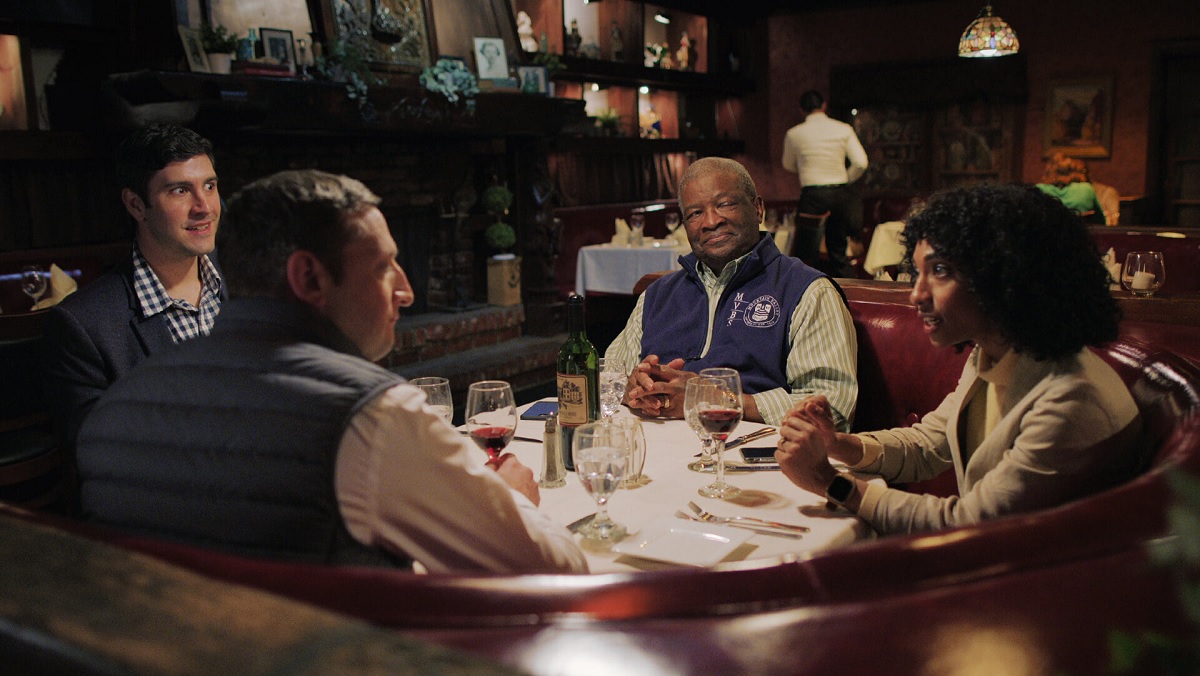 One thing I absolutely love about I Think You Should Leave is how often it allows older character actors the chance to be the hilarious one in a scene. In this one, which opens the third episode, we see Robinson as a former business school student who has joined two classmates for dinner with their beloved professor (Bob McDuff Wilson). It starts out very normal—as they always do—but as soon as the food arrives, the professor wishes he’d ordered the burger Robinson ordered instead. He makes strange “jokes” about how he’s going to steal the burger (“Gimme dat. Geeeeemme dat.”) before just deciding he’s going to eat the whole thing. And believe it or not, it gets weirder from there. 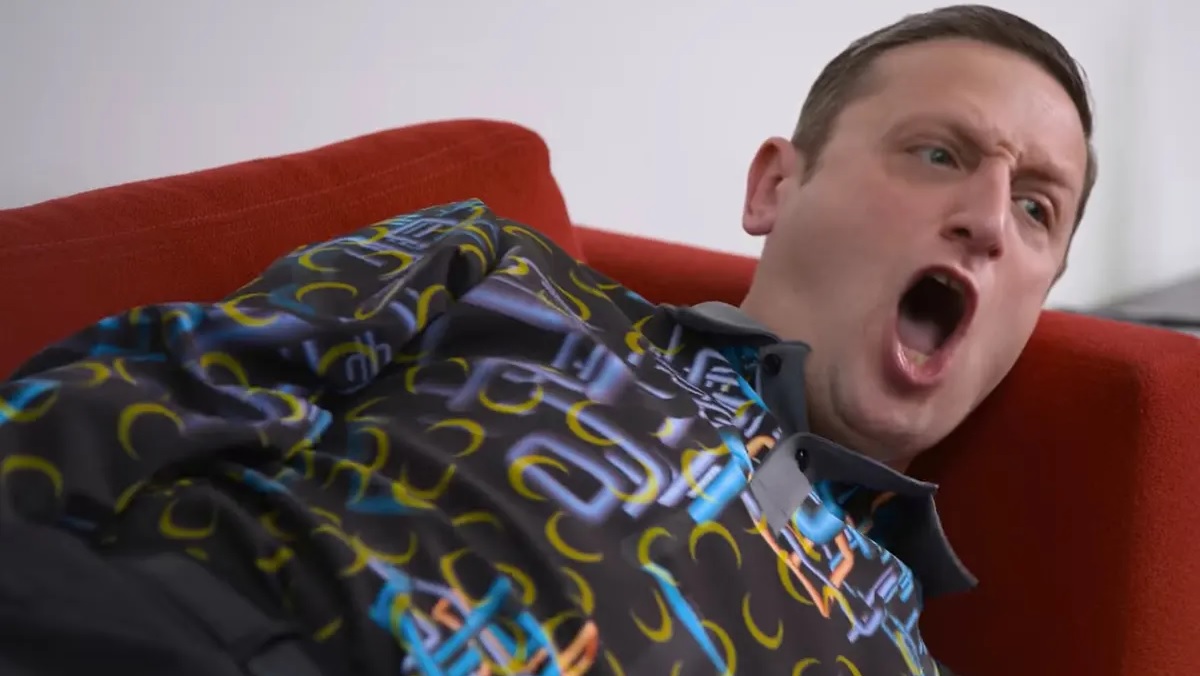 This is meat and potatoes ITYSL. A normal work meeting upended by Tim Robinson being the weirdest human alive. A team has gone on a trip to make a deal happen, but Robinson’s character lies on the couch. He says he’s tired, but his work nemesis Doug (William Knight, another amazing bit of casting) tells everyone the real story: he hasn’t spent any of his per diem on food, instead buying expensive shirts with “complicated patterns” from a boutique store called Dan Flashes. But how could he pass them up? They sell shirts in his exact style; everything in the store, he *would* wear. Too bad Doug’s a f***ing skunk!

One of the saddest and therefore most hilarious sketches is this one, which ends the first episode. A small group head into a haunted house for a ghost tour. But this one is after 10pm, which means it’s for grown-ups only. Swearing IS allowed. Unfortunately, Robinson and the tour guide (Alex Aiono) get their wires crossed. Robinson keeps asking if swearing is allowed, and then asks various lewd and vulgar questions about the ghosts. When the guide gives him a talking to, Robinson seems genuinely hurt and sad; is this or is this not the tour where swearing is allowed? He seems almost compelled to ask these foul-mouthed questions and doesn’t understand why people are mad at him about it. Perfection. 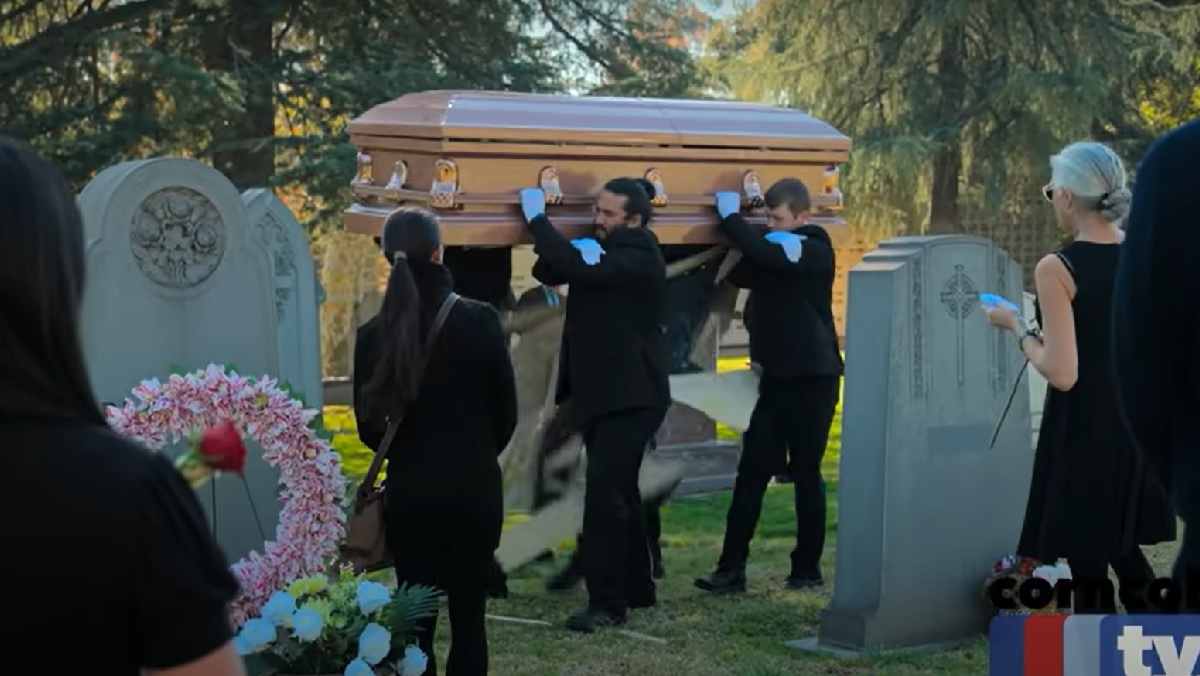 This one has already become the stuff of memes. Robinson talks directly to camera about how Corncob TV, a low-rent cable channel, won’t be available on Spectrum. That means, we loyal Corncob TV watchers won’t be able to watch hit shows like Coffin Flop, which is just a hidden camera show which shows various times when dead bodies fall out of or break through coffins at funerals and fall on the ground. We see so many bodies fall out of coffins while Robinson goes into a rant about how people think it’s not a real show and that he stages all the bodies falling out. “I didn’t do f***in’ s**t! I didn’t rig s**t!”

I think this might be the longest continued sketch the show’s done to date, and it’s also one of the weirdest and most disturbing. Mike O’Brien comes out of an office restroom with a couple of dots of urine on his khakis. Not a huge deal, right? After a coworker makes fun of him about it, Tim Robinson comes out of nowhere and spews this whole explanation about how that’s actually a new style of expensive pants from CalicoCutPants.com. “It’s got nothin’ to do with piss!” The coworker walks away, willing to accept the weird but substantiated claim.

But that’s not where it ends by a long shot. Robinson then demands O’Brien “give” to the creator of CalicoCutPants.com (Conner O’Malley) because if you use it and you don’t give, it might go away. He’s underwater because of this! He starts harassing O’Brien, sending him loud, un-quietable videos about how he has to give, before eventually it’s clear this is some Kafkaesque nightmare conspiracy from which there is no escape. 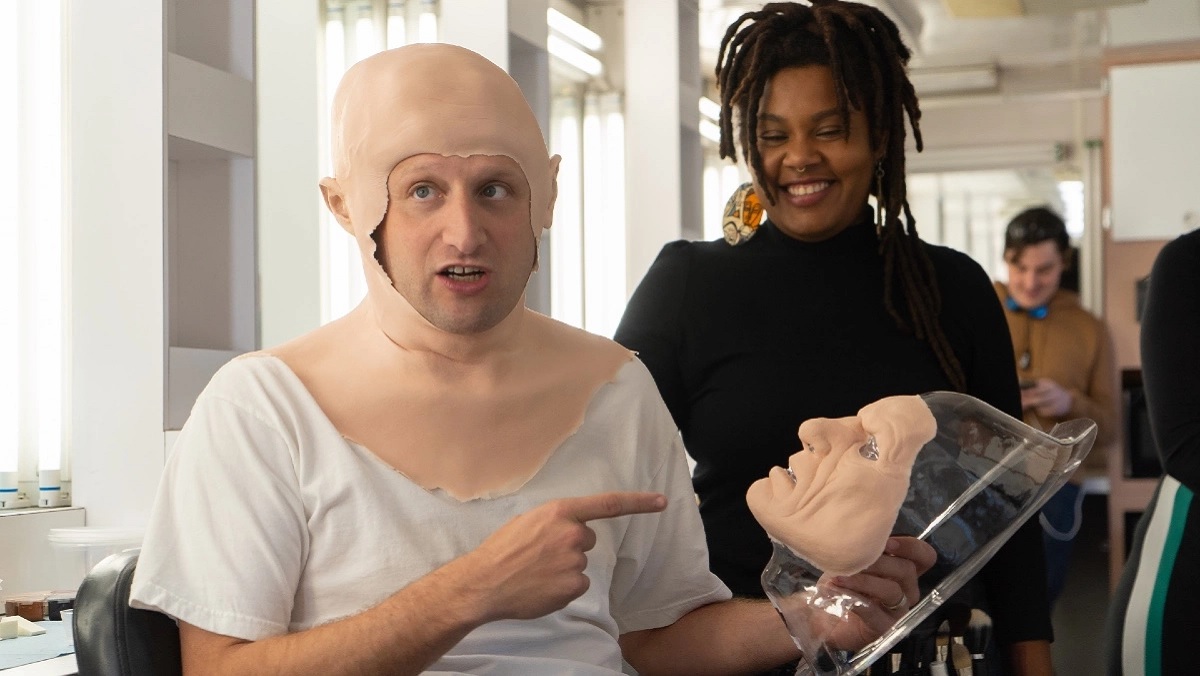 As with all the best sketches on the show, they start out normal and get very not normal. It’s a hidden camera prank show and Robinson is about to go under heavy makeup to play the character “Karl Havoc” at a mall food court. Karl is “a lot,” and he’s supposed to go mess with people. But as soon as Robinson enters the mall, in mounds and mounds of makeup and prosthetics, he has a panic attack. It’s too much stuff! He can’t breathe! He’s gonna rip the head off! It’s such an immediately downward plummet that it stops the shoot in its tracks. Then, as these things often do, it takes a precipitous turn toward the abyss. MUAH, we love it.

This is the sketch that I’ve laughed to the point of crying every time I watch it. Tim Robinson plays a driver’s education teacher about to show his class a series of instructional videos. He tells the kids not to laugh at the old production values or the acting. He then specifically asks them not to mention the tables. Weird. The video starts and we see a woman (played by returning champion Patti Harrison) loading plastic folding tables into the back of her van. She’s furious that one of her tables is filthy and then calls someone to complain about Eddie Munster before getting in to an off-camera accident. 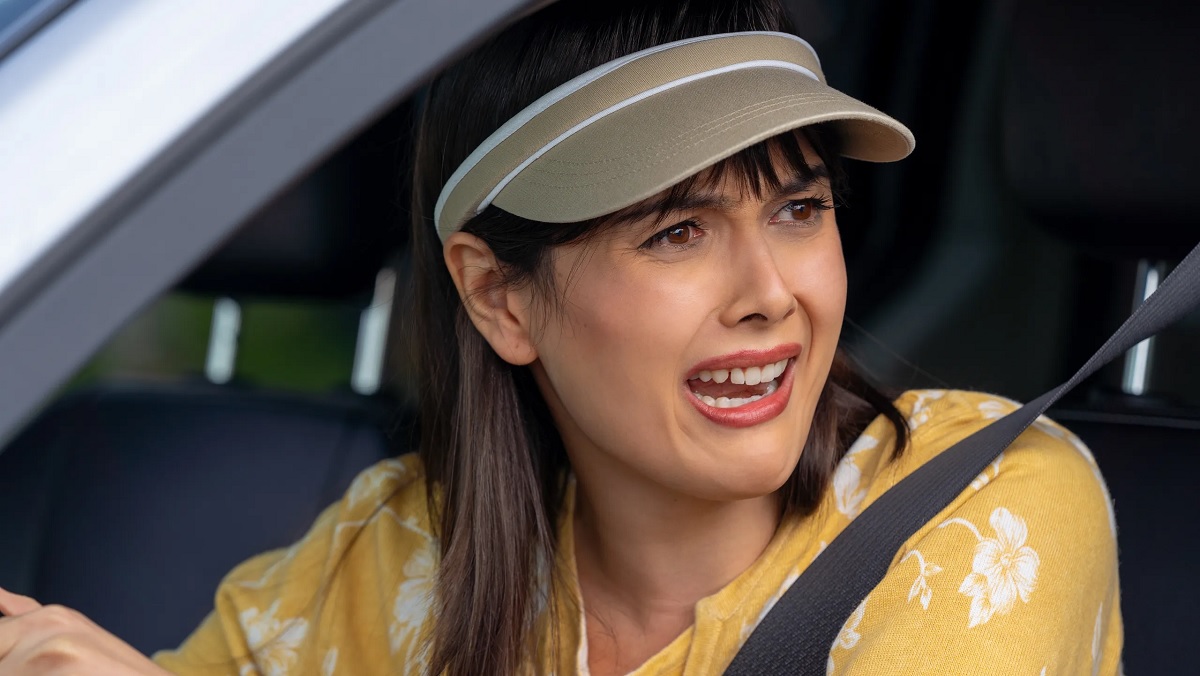 Naturally, this is weird. But there’s more videos, and it’s the same lady, with the same issues with her tables. The students ask what her job is and in one of Robinson’s patented very-loud line reads he says “Tables.” Or, more accurately “TAY BULLS!” How is “tables” a job? Well, we do eventually find out, but the entire thing just escalates as Harrison’s table-owner gets more and more upset about how filthy they are. It’s just madness.

And there you have our list! Even while writing it we thought of like six more sketches that could have, and probably should have, been here. Its a brilliant season. And at like 100 minutes total, it’s easy to rewatch over and over again.

I Think You Should Leave with Tim Robinson season two is streaming now on Netflix.

TAGGED: Sketch Comedy, Tim Robinson, i think you should leave