Whether or not you’ve seen the 1966 primetime animated television special, It’s the Great Pumpkin, Charlie Brown, there’s a good chance you’re familiar with its featured flying ace version of Snoopy—picture the cartoon beagle with goggles on his forehead on top of a flying doghouse and bells are bound to ring. Considering how iconic that particular version of Snoopy is, it makes perfect sense that it’s been drone-ified, and made into an IRL flying machine. After all, what is the 21st century for, if not making flying comic book characters a reality.

Odditymall picked up on the real-life flying ace Snoopy, which first hit YouTube back in 2015. It’s since been rediscovered, and any Peanuts fans who haven’t yet experienced the joys of watching Snoopy gaze at you through WWI fighter pilot goggles from a few dozen feet up, now is your chance. Seriously though, there is something about Snoopy, in any form, that just says “I’m so cool, no Earthly quarrel can touch me. Also, make sure my food bowl is full.”

The flying ace Snoopy drone was created by Flyguy Promotions, a company that aims to be “the best provider of aerial images worldwide.” Otto Dieffenbach, the company’s Marketing and Events Director, has posted numerous videos of the flying characters Flyguy has created, including, among many, many others: Donald Trump, Superman, R2D2, the Green Lantern, Iron Man, and even Guillermo from Jimmy Kimmel.

On top of this regular flying ace Snoopy, Flyguy also made a “Night Patrol” version, which is outfitted with enough decorative lights to make it visible from, roughly speaking, Pluto. Seriously though, the lit-up version of IRL flying ace Snoopy is the contraption you want delivering gifts to your kids on Christmas. Although a droned-out version of these robo-dogs from Boston Dynamics would be pretty cool too.

A look at Flyguy’s version of flying ace Snoopy outfitted with decorative lights.

For those who are desperate to get their paws on the RC controller for this thing, there’s good news and bad news. The good news is, Flyguy sells this complete model; the bad news is, it costs $700. Although Flyguy does say that “all electronics” are included, and if that means the drone too, it’s easier to justify the purchase. Plus, flying ace Snoopy is relatively cheap compared to the $1,850 flying witch. (To be fair, you can apparently put a picture of any given person’s face on the flying witch, which would be extremely dope for Halloween.) 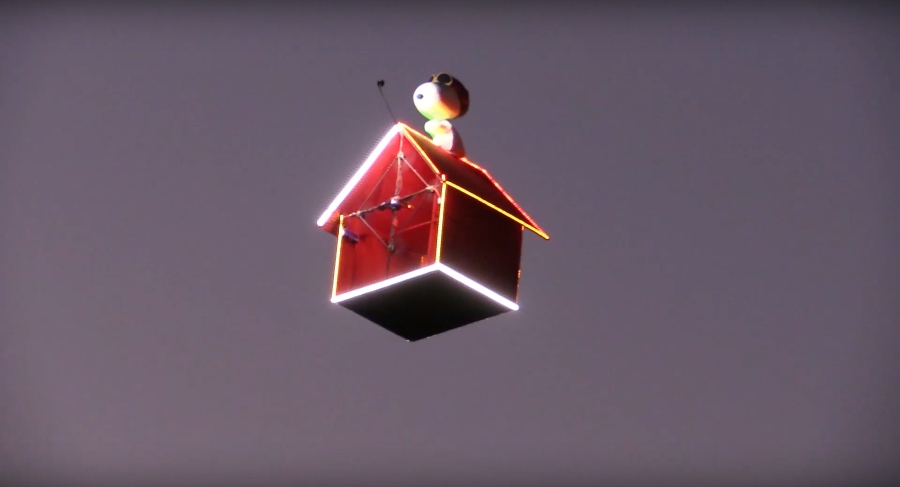 What do you think about this real-life version of flying ace Snoopy from It’s the Great Pumpkin, Charlie Brown? Could you ever see yourself dropping 700$ on an IRL flying comic strip character, or would you prefer to save up your dough for a drone armed with a flamethrower? Let your thoughts fly in the comments!