In November of last year, Elon Musk unveiled Tesla’s latest vehicle, the Cybertruck, which many considered to be groundbreaking—or at the very least, window-breaking. Since then, the divisive prototype has meme’d its way into every corner of the internet, showing up in various forms, including as a stand-in for the DeLorean in Back to the Future. Now, jumping on the bandwagon (hopping into the back of the bed?) is Hot Wheels, which has just announced two RC versions of what very well may become the official Mars car.

CNET picked up on the Hot Wheels announcement, which, as you can tell by the above teaser video, was made in a very Tesla-esque way. The video starts off with some shots of the real Cybertruck looking mean as heck, before the 1:10 scale version rolls out through puffs of smoke with its elongated headlight aglow. After watching the RC Cybertruck strut its stuff, including, quite adorably, its “insane towing capacity,” the even tinier version—presumably made for ants at 1:64 scale—shows up for what is certainly the best automotive version of the “never talk to me or my son again” meme. 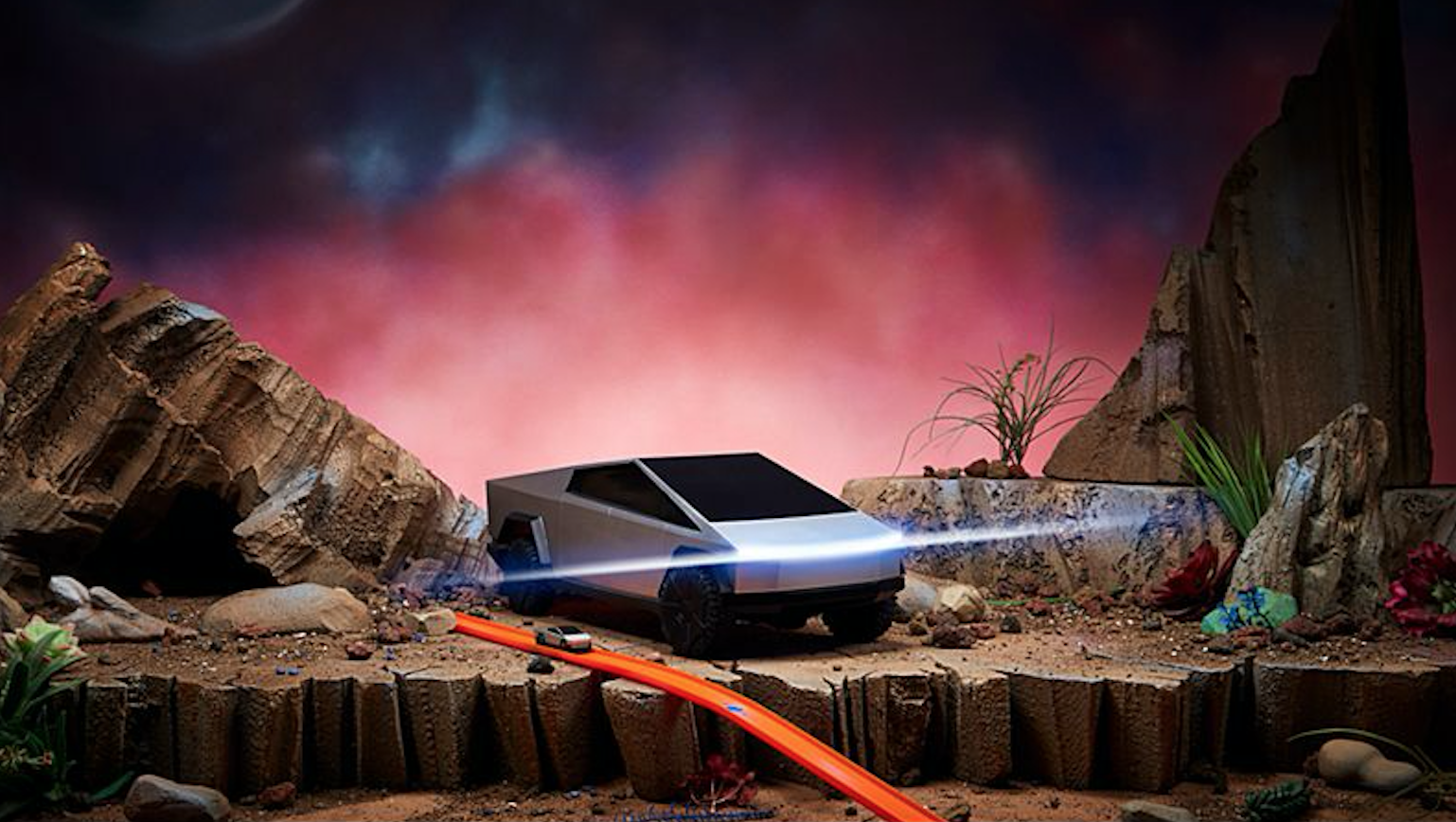 As far as the tech specs, the 1:10 scale Cybertruck will come with plenty of features that mimic the real version of the vehicle. According to the pre-order page, the 1:10 truck, which will have a limited run, will have functioning headlights and taillights, a telescoping tailgate that pulls out into a loading ramp, all-wheel drive featuring “Chill” and “Sport” modes, and for the crowned jewel, a reusable “cracked window vinyl sticker.” The 1:64 scale won’t have any of those features, of course, except for the options for Chill or Sport mode. But the Cybertruck for ants will be able to fit on Hot Wheels race tracks, which is something. 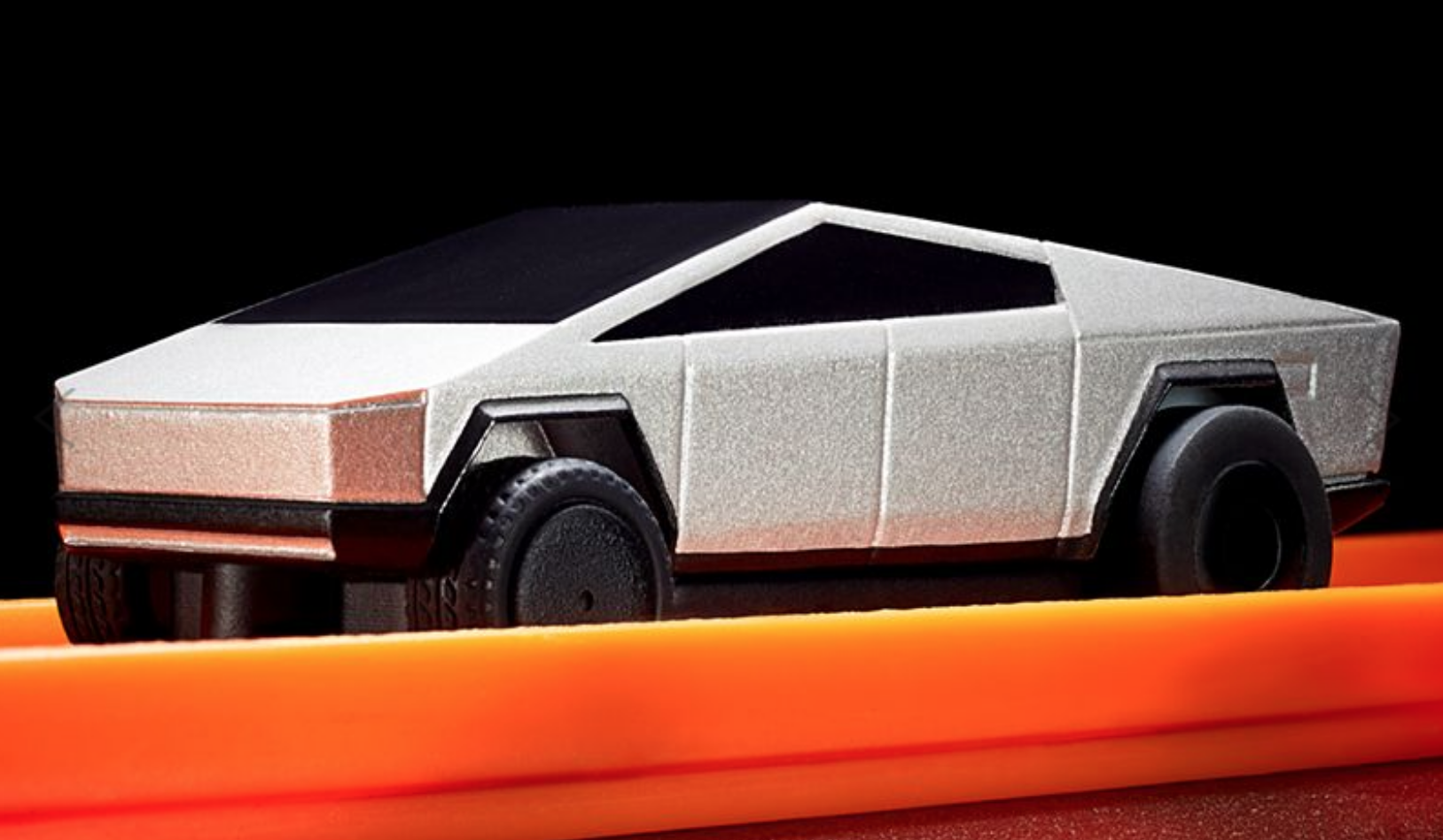 A close-up look at the 1:64 scale Cybertruck.

As far as pricing goes, folks looking to purchase the 1:64 scale Cybertruck will have to actually pay four times the amount they would need to spend on a reservation for an actual IRL Cybertruck—$400 versus $100. Although that’s still about 100 times less than a real, single motor, rear-wheel drive Cybertruck. (Which kind of begs the question, would you rather fight 100 RC Cybertrucks or one IRL Cybertruck?) The 1:64 scale version is far cheaper, however, at $20.00.

Taking the groundbreaking power and performance of the #Cybertruck and putting it all into a #HotWheels R/C. Available in a limited-edition 1:10 scale model and 1:64 model. Preorder now at https://t.co/KtlT7laUYE pic.twitter.com/mzVpmtjqWi

The biggest downside here is definitely the wait time. Buyers of either version of the Hot Wheels Cybertruck will have to hold out until December of this year for delivery, which is even longer than we’ll have to wait for the LEGO version of the Mandalorian’s Razor Crest. But if these mini Cybertrucks are anything like the real ones, as soon as they’re available they’ll probably start showing up everywhere.

What do you think about these Hot Wheels Cybertrucks? Are you a big fan of this angular design, or do you prefer your miniature model cars be of the more classically shaped variety? Give us the small scale version of your big ideas in the comments!