There are plenty of reasons to watch Spider-Man: Into the Spider -Verse more than once: wall-to-wall Spider-action, its sweetly affecting story, that groundbreaking animation. But one of the bonus materials on the film’s digital and home video release offers an especially fun reason to take a closer look—likely multiple times—at its amazing artistry. There are hundreds of Easter eggs built into the narrative and visual fabric of Spider-Verse, and the filmmakers offer clues to fans on how to find them all.

At a recent press day for the film’s upcoming release on home video (March 19; it’s already available digitally), producer Chris Miller screened a clip from “The Spider-Verse Super-Fan Easter Egg Challenge,” where the filmmakers showcase some of the Easter eggs in a scene from their Oscar-winning masterpiece.

“We get a lot of people pointing out little Easter eggs they’ve seen and asking us how many are in the movie,” Miller said. “This is not going to show you all of the Easter eggs in the movie, because it would be like a three hour piece—there’s nested things deep inside things. But this is just a breakdown of what’s in one scene alone.”

via GIPHY Perhaps unsurprisingly, the scene in question was one that takes place in the film’s version of Times Square, where there are dozens of billboards and background displays for the filmmakers to sneak in their jokes and references. “The idea that there’s only one universe seems pretty silly,” observed one of the film’s animators. “I think this movie is going to have to be revisited so many times. It’s so much to digest. There’s just subtle little changes in that universe, subtleties that we wanted to feather in.

“Here in Times Square, we had all kinds of opportunities to play with alt-world signage,” he continued. “If you look closely, you might even see a few references to some famous actors. Miles doesn’t live in the same universe we do. It’s like ours, but it’s different, so we had fun playing around with [questions like]: What would their version of Coca-Cola be?” 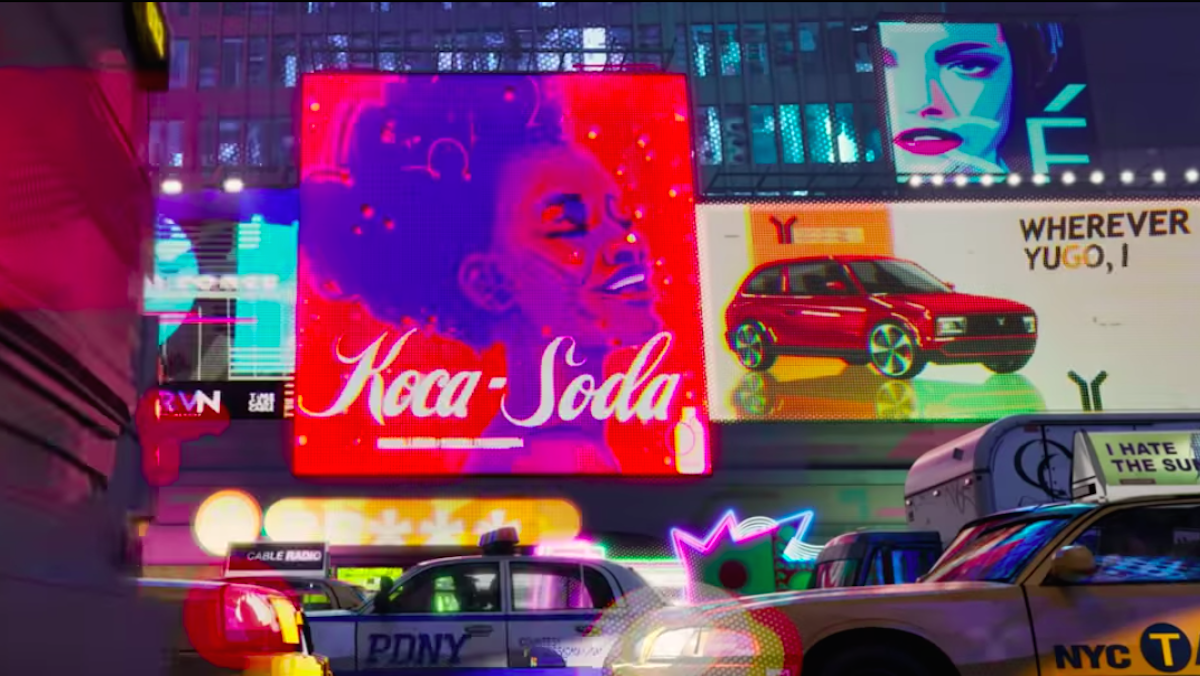 In the clip, Miller and his co-producer and the film’s co-screenwriter, Phil Lord, talked about some of the material from their own career that they snuck into the film. “Chris and I made a TV show when we were young whippersnappers called Clone High USA,” Lord said. “It started as an idea that Chris had called Clone College, and I guess this is a universe where [Chris] never met me and [he] went on to do this all by yourself.”

“Phil had the idea to set it in high school,” Miller explained, “because it would be more angsty and it was sort of like a teen drama.” (Lord admitted, “I ruined it.”) But thanks to some subtle signage in the background, their failure became Miles’ universe’s biggest hit. “In this alternate universe, Clone College is the biggest hit show of all time,” Miller said. “It got a billboard in Times Square!”

One of the film’s co-directors, Peter Ramsey, highlighted a few of the other understand changes that they implemented in Miles’ reality to differentiate it from our own. “Throughout the movie, all of the advertisements are a little bit off of what we know,” he said. “Google is in our movie, but it’s not called Google. It’s called BackRub, which was their original name. And you think, okay, this is New York City, but if you look at the letters really carefully instead of NYPD, they’re a little scrambled around [to say “PDNY”], that’s because it’s an alternate universe.”

Ramsey continued, “Some of the differences are big, and some are very small. The only real difference between a Chance the Rapper poster in our world is the number [on his hat]. In Miles’ universe, it seems like they have all the same celebrities but they do different things. Maybe Blake Griffin is actually a baseball player.” 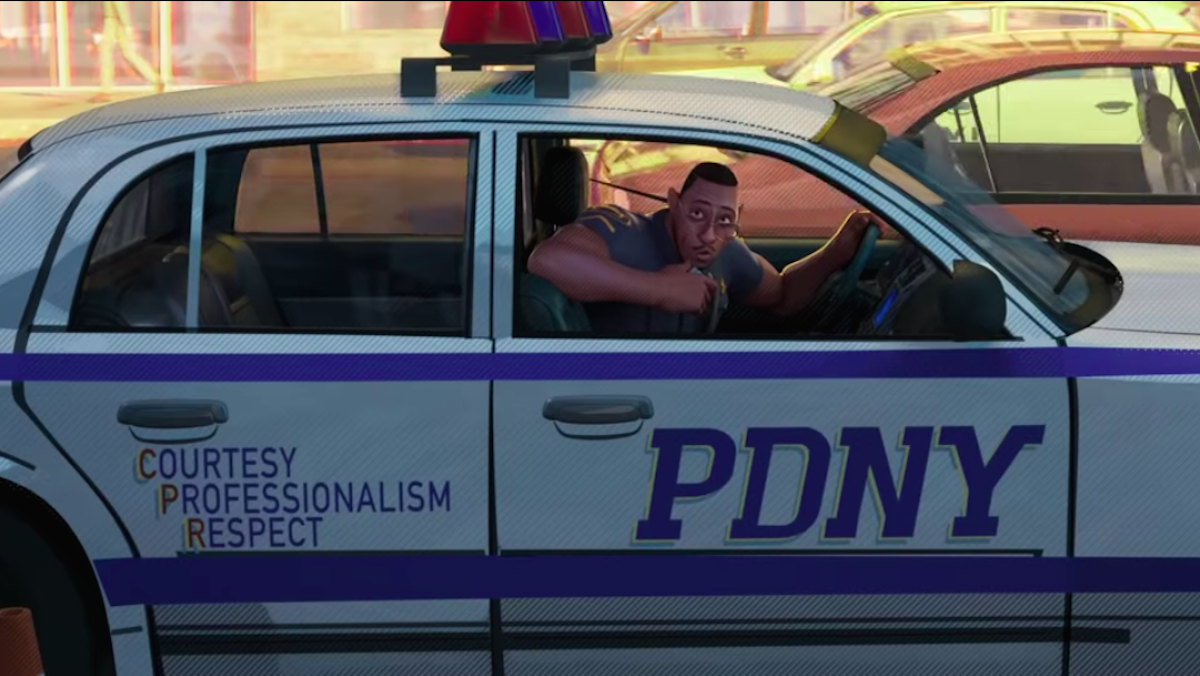 Lord further indicated some of the sneaky and perhaps controversial changes they made to the identities, occupations and career choices of celebrities, and in some cases collaborators. “Blake Griffin plays for the Brooklyn Red Sox,” Lord revealed. “Steph Curry is a famous golfer. There’s lots of Easter eggs featuring people that we know and like and hope to know eventually.”

He continued, “Rodney pitched an idea to Seth Rogen and Evan Goldberg for what their alternative universe poster would be, and they all signed off on it. And then he got an email the next day saying that they were getting cold feet about this idea and said, hold your horses, Rodney. And then he wrote back, ‘That’s exactly what it’s going to be.’”

No matter what dimension you’re in, I’ll be there making movies. Go check out Spider-Man: Into the Spider-Verse, which was made by some of my wildly talented friends who I’m jealous of. pic.twitter.com/R6H837fCee

“Seth Rogen as a jockey is a film that I would watch,” Miller added enthusiastically. “And I think people appreciate a movie that feels like a lot of effort was put in and it wasn’t just phoned in. And so when you can add these little tiny details that reward people for closer investigation, I think that the fans and audience is really respond well to that.”

That said, during a question-and-answer session afterward, Chris Miller said there was one series of Easter eggs that even the filmmakers may not be able to find in the film. “ Obviously Stan Lee is in Stan’s Merch Shop, but he was the model that every animator wanted to use in any New York scene. So he often appears briefly in a number of shots throughout the movie,” he said. 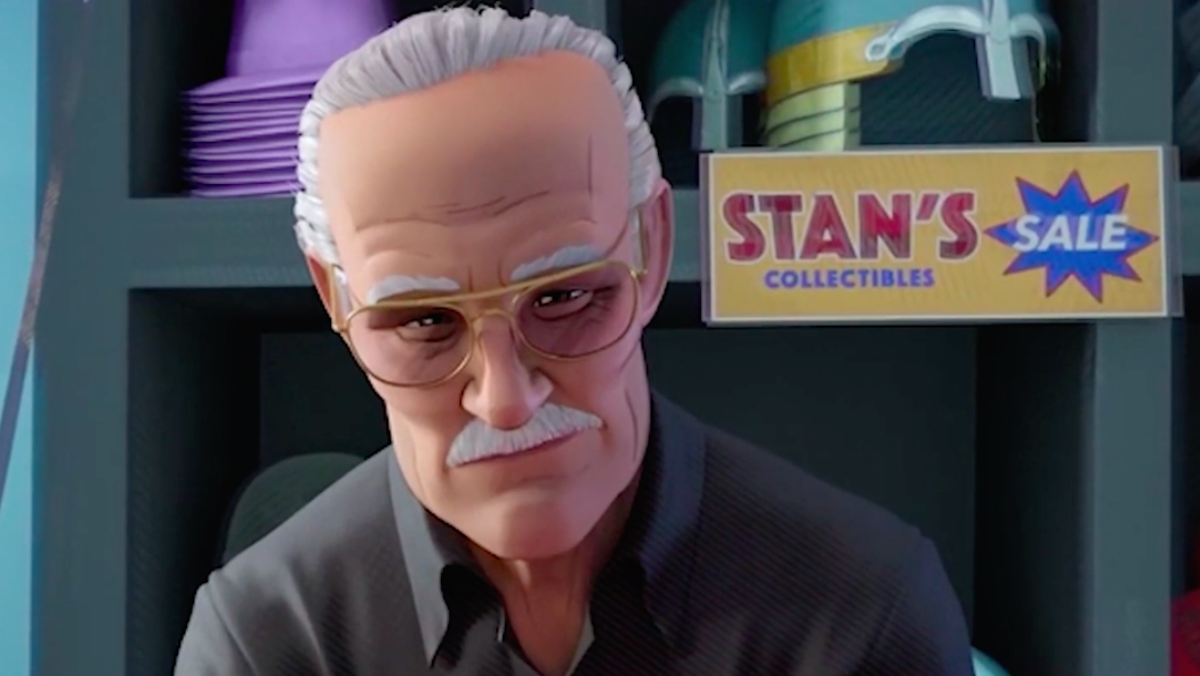 “Almost anytime there’s a train going by, Stan’s in it. In the scene when Miles and Peter land on the sidewalk and he says, ‘Thanks, New York,’ the person walking over him is Stan on the phone, not noticing. And there were many, many others because every animator wanted so desperately to be the one to animate Stan.”

Even the film’s head of story admitted that he didn’t know exactly how many versions of Stan Lee appear in the finished film. But Into the Spider-Verse fans can start searching for them—and thousands of other Easter eggs—right now on digital platforms. The 4K Blu-ray is available on March 19.