Although the COVID-19 pandemic is finally starting to see a lowering of cases in the United States, that is not the case for the rest of the world. Countries like India are suffering terribly. And they now need our help more than ever. One of the many efforts to raise funds for victims of the pandemic is Global Citizen’s Vax Live: The Concert to Reunite the World.

The Foo Fighters, one of the headliners, had not performed on stage together in a year and a half. To make the event even more special, the band had a big surprise for the crowd. You can say they dropped the proverbial mic. Via Laughing Squid, we learned that Foo Fighters frontman Dave Grohl brought AC/DC’s Brian Johnson to join them onstage for a special performance of the latter’s signature hit “Back in Black.” We think that Tony Stark would have been proud. You can watch this iconic musical moment right here:

Other celebrated performers at this concert included Jennifer Lopez, Eddie Vedder, J Balvin, and H.E.R., among others. Celebs who made appearances included Ben Affleck, Chrissy Teigen, David Letterman, Gayle King, Jimmy Kimmel, and Sean Penn. Selena Gomez was the host. The event had a crowd of more than 20,000 fully vaccinated health workers and first responders. They were rocking out, partying like it’s 1999 (or 2019).  After the year they’ve had, they deserve an epic show like this. And 50 more just like it. 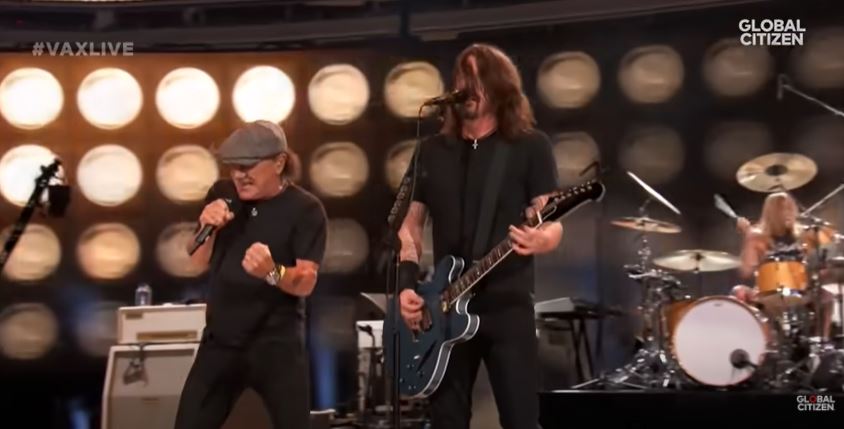 The Concert to Reunite the World event helped mobilize an amazing $302 million in funding for people suffering the world over. Many have had their lives changed forever due to the devastating effects of the virus. Over twenty-six million COVID-19 vaccine doses. The goal is to create equitable vaccine access to the most marginalized communities around the world, as well as to as many health care workers in those places that desperately need support right now.