The Hacksmith crew, made up of James Hobson and his team of engineers, has delivered numerous other wild prototypes in the past. Lightsabers, a Batman grappling gun, and a Reinhardt Rocket Hammer have all been cranked out of Hacksmith Industries. Now, the crew over at the Hacksmith YouTube channel has created a bionic arm for their latest project, inspired by the video game Crysis. And while the nascent prototype isn’t exactly ready for inspection by Nomad, it does show a decent amount of promise.

Or at the very least, a fun and educational foray into the world of pneumatic muscles.

For those unfamiliar, Crysis is a series of first-person shooter games that place players in the body of Jake Dunn, a U.S. Army Delta Force soldier. As Dunn battles aliens and other enemies, he utilizes a Nanosuit, which is essentially a super-OP exoskeleton.

In the build video, we see the Hacksmith crew hack together their prototype Nanosuit arm, utilizing “pneumatic muscles.” As one of the Hacksmith engineers notes, the pneumatic muscles are created out of inflatable tubes housed inside of woven, carbon fiber sleeves. They expand when air is pumped into the tubes. That causes the fixed-length carbon fiber sleeves to contract the same way a biological muscle contracts.

Hobson shows off the Nanosuit arm lifting everything from heavy weights to a tire to a propane tank. Even though the prototype doesn’t provide a night-and-day difference between aided and unaided lifting power, there’s no doubt it’s providing some assistance—at least in a few instances. (The bicep curl test Hobson performs at around the 16-minute mark probably shows the most potential for the prototype as of right now.) 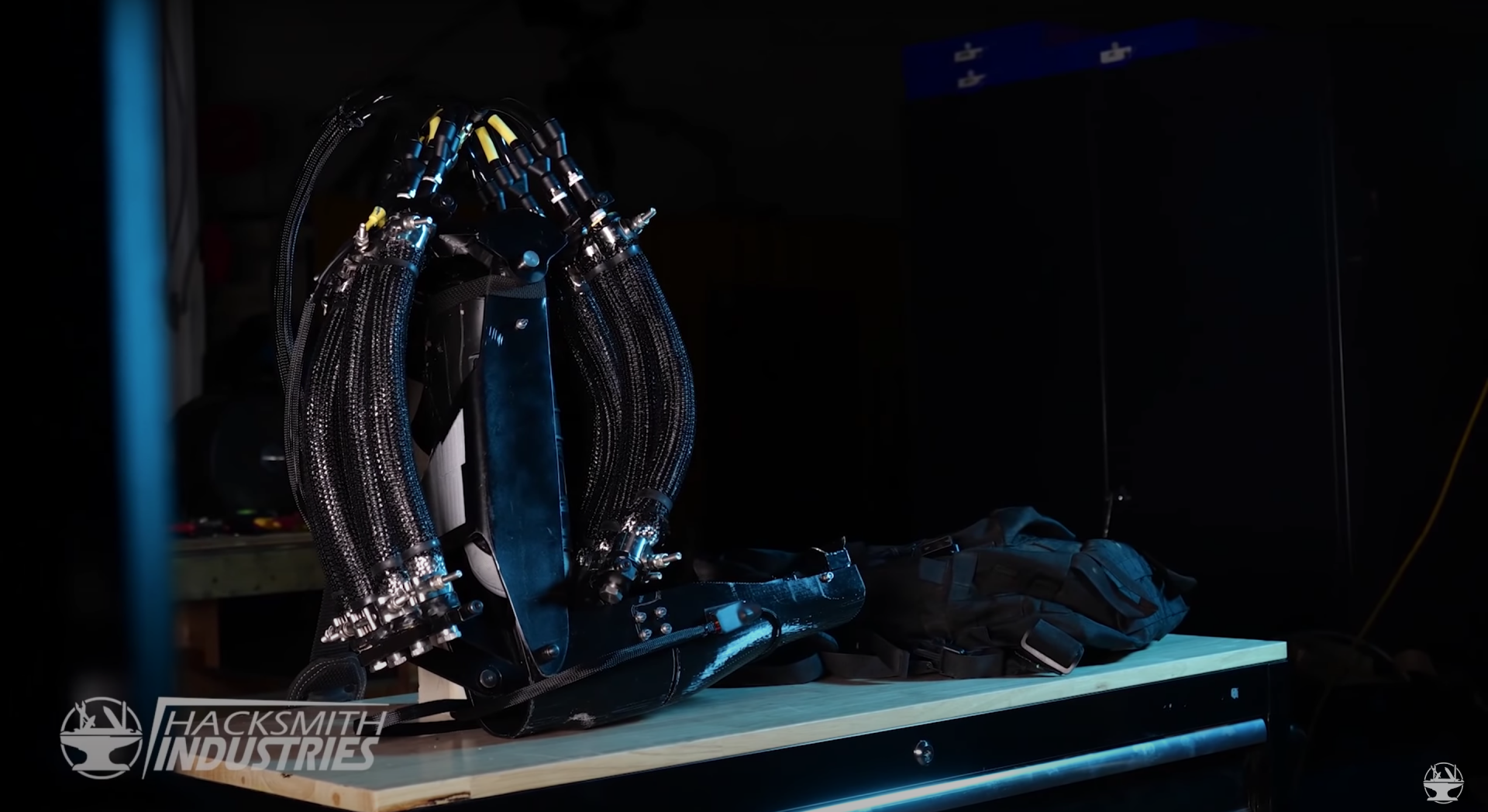 Despite the fact that the Nanosuit arm didn’t turn out exactly like the Hacksmith crew wanted, there’s no doubt it provided an excellent learning opportunity. There’s even a little chat after testing it out, where possible fixes and upgrades are discussed. Changes include potentially using pneumatic cylinders instead of pneumatic muscles. And also not having the Nanosuit arm blow apart during use.

What do you think about the Hacksmith’s Crysis Nanosuit arm prototype? Are you ready to see the revised version of this muscle-enhancing machine, or do you just want more Tesla mini-vehicles? Let us know your thoughts in the comments!