Numerous exoskeletons have been in the news over the last few years, with some of the more exciting ones looking like they came out of Edge of Tomorrow and some of the less exciting ones looking like they’d probably hinder users more than they’d help. But while most robotic exoskeletons have been introduced with the intention of making users more productive, there are a handful that are aimed at tackling the crucial problem of helping paralyzed people to gain mobility once again. Like this exoskeleton built by researchers in France, which uses a brain-machine interface to help quadriplegics regain control of their limbs.

In a new study published in The Lancet Neurology journal, which comes via Futurism, researchers from multiple governmental and educational institutions in France—which are all listed out at the bottom of this page—say that they’ve been able to use a “robotic system controlled by brain signals” to help a tetraplegic man to move all all four of his limbs again. And while an associated press release for the study urges people to be cautious of overhyping the results, it does note that “[The] findings could move us a step closer to helping tetraplegic patients to drive computers using brain signals alone….”

It seems the biggest breakthroughs with this particular exoskeleton, which doesn’t appear to have any kind of moniker or even an acronym, come from how minimally invasive it is, as well as how effective it is at decoding brain signals. The press release notes that while previous brain-machine interface (BMI) systems have had recording devices implanted underneath the outermost layer of the brain, this one only required two implanted recording devices between its user’s brain and skin. (It does look like pieces of skull needed to be removed to allow for the recording devices to come into contact with the brain, although that’s unclear.) 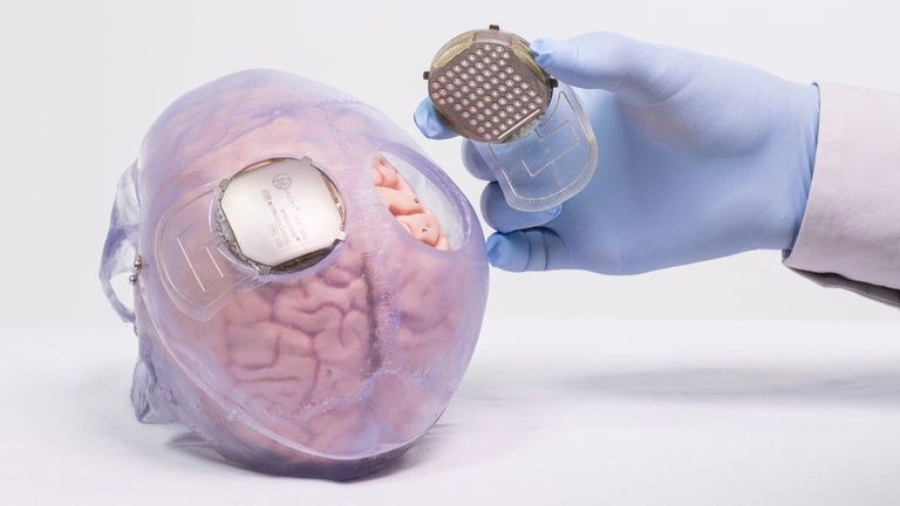 The two recording devices, which each contain a grid of 64 electrodes for recording brain signals, were implanted into the head of a 28-year-old French man who’s known only as Thibault. Thibault, who was paralyzed from the shoulders down after falling 50 feet to the ground off a nightclub’s roof, was the only person to try out this exoskeleton operated by a BMI, and underwent an enormous amount of training to do so.

The press release for the paper says that the study took 24 months to produce, with Thibault undergoing frequent virtual and real-world training sessions in order to learn how to use the exoskeleton. Essentially, Thibault needed to learn how to connect his mind to the exoskeleton, which was possible thanks to the electrodes implanted in his head—Thibault would think of bodily movements, the electrodes would pick up on the brain signals produced by the thoughts of movement, decode those signals, and then send them to the exoskeleton where they were turned into movement.

As the months of virtual and real-world training went on after the electrodes were implanted in Thibault’s head, he gained more and more “degrees of freedom” while suited up with the exoskeleton. Ultimately, Thibault was able to successfully turn on the exoskeleton suit with his mind 73% of the time, walk using the suit (as demonstrated in the video above), and even reach out with one or both hands to touch target objects in both the real and virtual worlds. He even learned how to control a virtual avatar in order to play a video game similar to Pong.

While this prototype exoskeleton is quite promising, especially in regards to its use of relatively noninvasive cranial implants and machine learning algorithms for decoding brain signals, the press release for the study still ends on a note of cautious optimism. “Although this study presents a welcome and exciting advance, we must remember that proof of concept is a long way from usable clinical possibility,” the press release claims, finally adding that “Even if ever workable, cost constraints mean that high-tech options [like this exoskeleton] are never going to be available to most people in the world with [a] spinal cord injury.”

What do you think of this exoskeleton built to help paralyzed people move their limbs again? Do you think it will ever be a cost-effective option for people who’ve been paralyzed, or should researchers be looking into other bio-engineering avenues first? Let us know your thoughts in the comments!