Charlie Jane Anders has long been a vocal presence within the sci-fi fandom at large. Her prose writing has earned her multiple Hugo Awards as well as a Nebula award for her novel All The Birds In The Sky. With her upcoming book, Victories Greater Than Death, Anders kicks off a planned trilogy within the YA space. A tale reminiscent of the big flashy space opera adventures she grew up adoring. Nerdist recently had the chance to speak with Anders about her newest work. 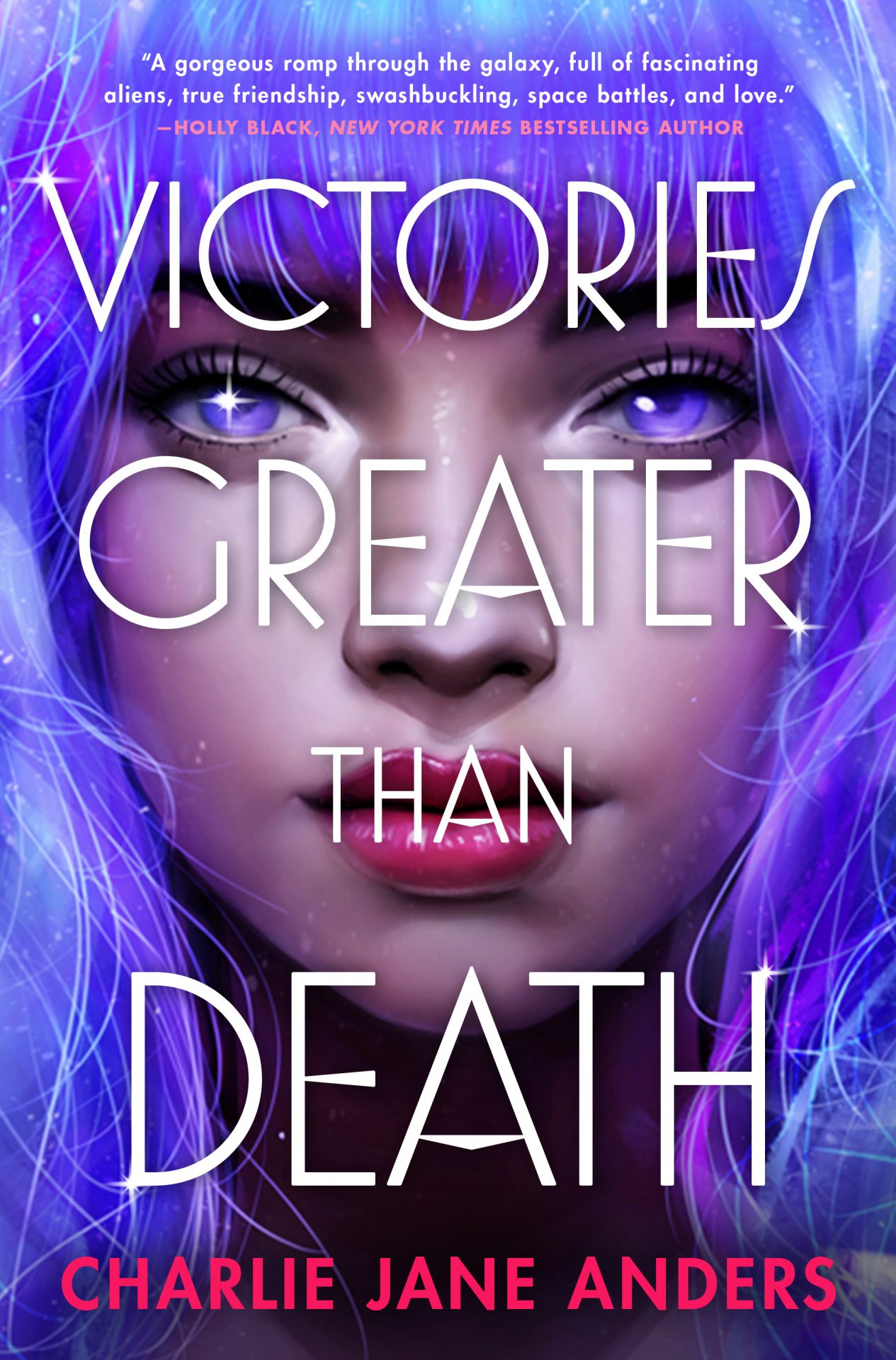 Nerdist: What motivated you to shift to a teen audience with your new series?

Charlie Jane Anders:  What made me really eager to write YA myself was noticing a turn towards more action-adventure fare—like Marie Lu’s Warcross, or Leigh Bardugo’s Grishaverse. Lately, YA is full of exciting, fast-paced adventures of the sort that I grew up reading and loving. It was pretty obvious to me that if I wanted to do a fun, entertaining romp along the lines of Doctor Who or Star Wars, YA would be the place to do it. And then my mind immediately went to all those years I spent as a teen, waiting for aliens to come and take me away from this planet—and the story just took shape from there.
Your work has gone through some major tonal shifts. Is there something that pulls you towards whimsy or seriousness when you’re crafting an idea for a book?
I don’t want to keep repeating myself or be a one-trick pony. Earlier drafts of All the Birds in the Sky definitely sacrificed the characters for the sake of a good laugh, and I had to tone the humor down a lot before it really clicked as a relationship story. For City in the Middle of the Night, I made a conscious decision to dial the humor way down, to make more space for the characters and the ideas. That novel really turned into a meditation on trauma and the ways in which the past bleeds into the present, which wouldn’t have been possible if I’d been trying to keep the laughs coming.
What I loved about writing Tina’s first-person narration [for Victories Greater Than Death] was that I could throw hair-eating monsters and giant nine-eyed slugs at the reader, and we could just roll with it because Tina accepts it. With Tina’s voice, I was able to be funny in a very different way than the third-person narrator of All the Birds, but still achieve that balance of humor and feels.
A common theme in your novels is characters moving towards a destiny that they’re only vaguely aware of.  Is there something about this particular trope that you feel drawn to explore?
Yes! One of my obsessions as a writer is the “quest that people don’t necessarily know is a quest.” I hate writing characters who just go where the plot needs them to go, because I start to get bored if the characters don’t have a more personal stake in what’s going on. I just feel like this is more real and grounded. We usually don’t know where all of our searching is going to end up, until we get there.
I also feel like a quest needs to be spiritual as much as logistical, so I try to write characters who are searching for fulfillment as much as trying to accomplish a plot-driven goal. I read a ton of medieval texts like Piers Plowman and Pilgrim’s Progress back in college, and they left me with an enduring love for the quest for “what does it mean to be a good person?” 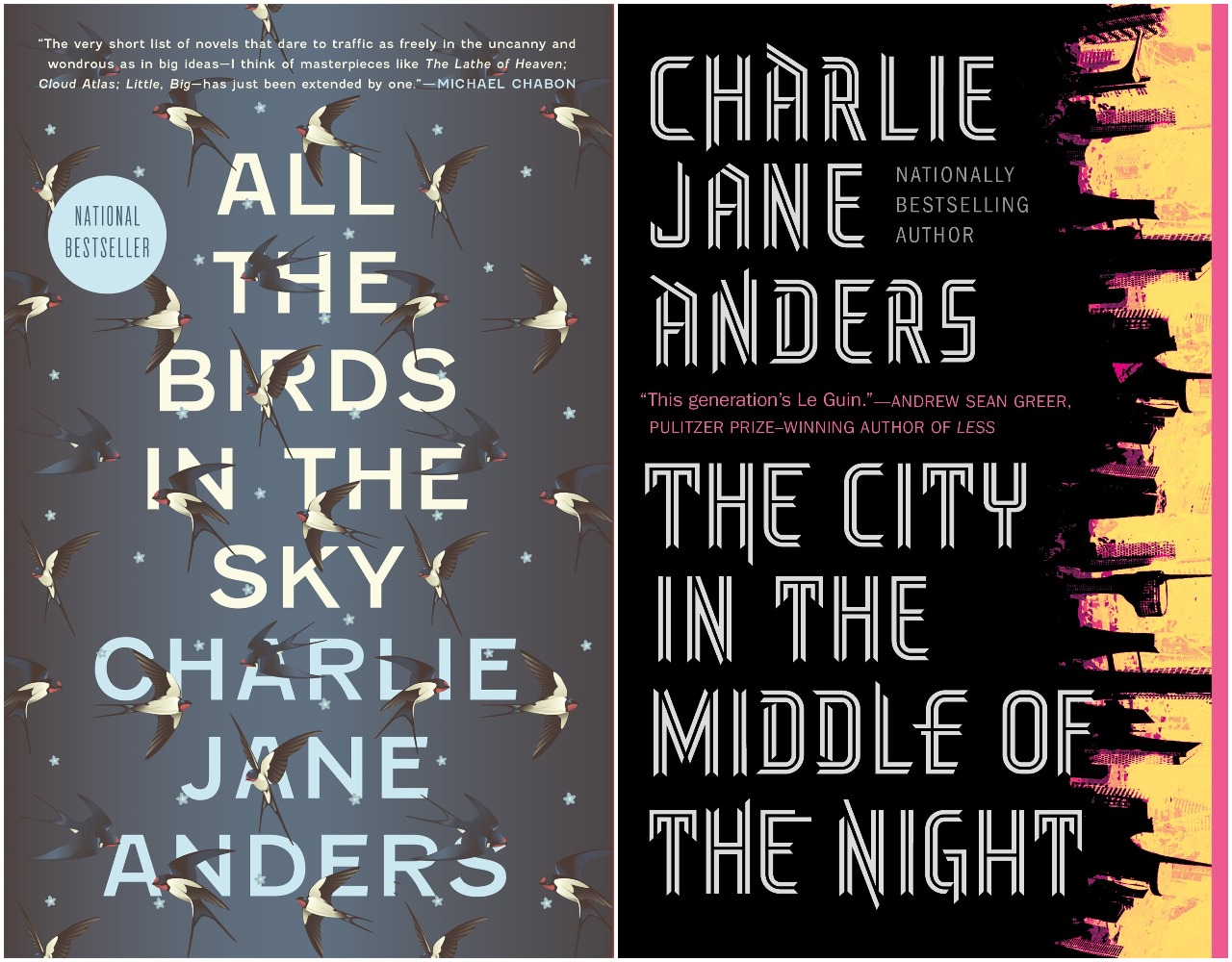 Tor Books
You wrote a blog post recently detailing a lot of the tropes in Space Opera and the choices you made for how you’ve reflected them in the book.  Can you talk about some of the motivations behind those changes, like the “spaceweave?”
When I came up with this space opera universe, I was trying to come up with something that had internal logic of its own, but which also felt like I hadn’t seen it a million times before. And one of the things I had loved about a lot of YA books I’d read was the sheer complexity and boldness of the mythos. This backstory is only touched on briefly in the actual book, but it was important for me to have it worked out.
With the spaceweave, I knew that at some point in the past couple decades, the war between the Royal Fleet (the good guys) and the Compassion (the bad guys) had taken a somewhat disastrous turn. A scientist had developed a new, better form of Faster Than Light travel (the spaceweave) but it only really worked for smaller ships because the energy costs went up exponentially for larger ships. So the Royal Fleet’s heavy-hitting ships, its giant broadswords, were suddenly useless. The Compassion had already been focusing for a long time on designing smaller, more agile ships for guerilla warfare, like daggers.
The upshot was, the broadswords became more valuable if they stayed in one place, like space castles. And the Royal Fleet was forced to rely on its smaller, less powerful ships, which have taken a beating.
Do you feel there’s more power in these types of pushes for diversity in new IP properties, like your books, versus updating existing IP, even stuff you’re a fan of like Star Trek or Doctor Who, to be more inclusive?
Yes! I love how inclusive Discovery is with its multiple LGBTQIA+ characters. But it’s undeniably true that there are limits to taking a series that’s long in the tooth, like those two, and making it more inclusive. A lot of assumptions are baked in to the property, based on decisions that were made in the 1960s. When a corporation owns a property that’s been going for fifty-plus years, they have to maintain its value at all costs. Even if a brand new TV show or movie franchise is bound to be the property of some corporation, there may be more willingness to take risks with something brand new.
Having said that, if you could be given the keys to any single existing IP and told you had absolute autonomy to make it your own, what would it be?
Not gonna lie. I have a whole pile of story ideas for Doctor Who in my head (and some written down, just so I could stop thinking about them) and I would love to be given the chance to steer the TARDIS someday.
Victories Greater Than Death will be released on April 13 from Tor Teen.
Featured Image: Tor Teen
Riley Silverman is a Nerdist contributing writer. She can be found on  Twitter and  Instagram. Her comedy album ‘Intimate Apparel’ is available digitally online.
Top Stories
Television