Update 9/14/20: According to director Nia DaCosta, Candyman’s release date was pushed to 2021 in the wake of the COVID-19 pandemic.

When it was announced that Jordan Peele would be working on a new Candyman film, everyone collectively went “of course.” It’s a perfect match, the man who brought blackness, race, and radicalism into contemporary horror and one of the first Black horror icons, who was brought to life by Tony Todd in the original series. Even more exciting was the announcement that Little Woods director Nia DaCosta would go behind the wheel of the new take on the classic story. We’ll we’ve gotten our first look at the terrifying trailer for DaCosta’s Candyman and it looks like a horrifying reimagining that brings the legend of the Candyman into 2020’s America.

The absolutely wicked trailer continues Jordan Peele’s tradition of taking R&B songs we grew up with and making them utterly haunting. This time it’s the perfectly apt Say My Name by Destiny’s Child; it makes a whole lot of sense if you’re familiar with the Candyman lore. As the urban myth goes, if you say his name five times in the mirror, the Candyman will appear and kill you with his hook hand. Fittingly the trailer features many folks repeating the name of the fearsome character to different levels of success or fatality depending on how you look at it.

Narrative wise we meet Yahya Abdul-Mateen II’s character Anthony McCoy here. Abdul-Mateen II is coming off a critically lauded turn as Dr. Manhattan in Watchmen. It’s a hard act to follow, but it looks like DaCosta and writer/producer Peele are giving him plenty to work with here. We get to see the actor’s range as in the span of the trailer the actor goes from excited and naive to terrified to terrifying. This Candyman looks like it will follow Anthony and his partner as they move to the now-gentrified area of Cabrini-Green. This is the same setting as the 1992 Candyman movie. Anthony is an artist looking for inspiration. He may have just found it in the local legend to which he seems to feel a deep connection. 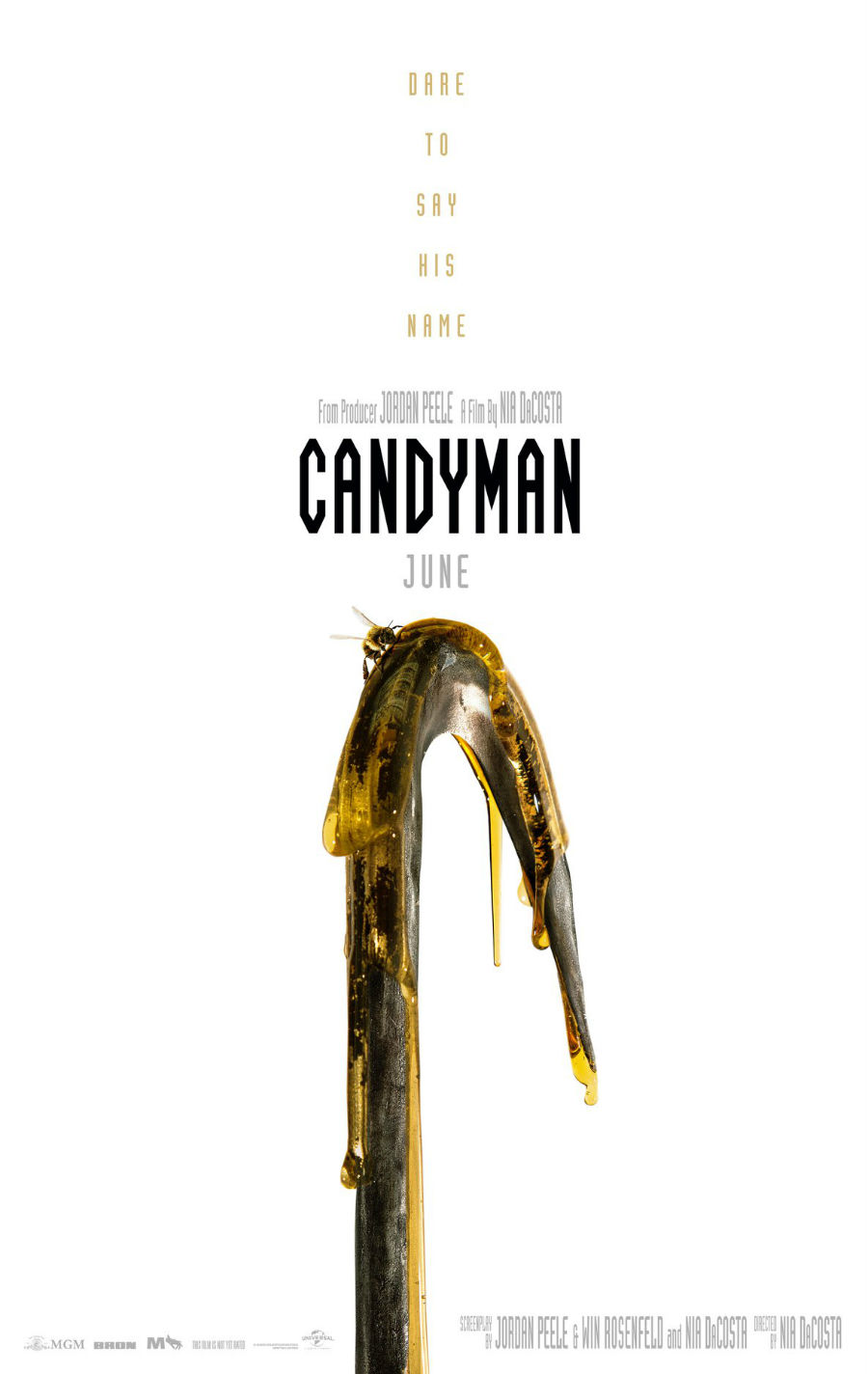 We attended the trailer reveal event at Universal Studios in Hollywood. During this, director Nia DaCosta revealed that the real life gentrification and eradication of the Cabrini-Green area hugely influenced her take on the “spiritual sequel” to the classic film. “It’s what helped us to reimagine the story, because Cabrini-Green is gone,” DaCosta explained. “The movie from the 90s has a vision of Cabrini-Green where it’s sort of on its way to being knocked down, so going back there and seeing what’s happened around that area–like there’s an Arclight really near where Cabrini-Green was, because it’s gone. So, what we do on our film is talk about the ghosts that are left behind.”

We’re incredibly excited (and totally unsurprised) that DaCosta and Peele are continuing the radical legacy of Candyman. They use the horror and genre storytelling as a way to explore the realities of living in America.Not to mention dealing with the ghosts both literal and proverbial that haunt it.