The Magic of Cameron Boyce in Disney's THE DESCENDANTS - Nerdist

The Magic of Cameron Boyce in Disney’s THE DESCENDANTS

It was with a heavy heart over the holiday weekend that fans discovered that Cameron Boyce, best known for his work on the Disney Channel show Jessie and the Mouse House’s magical original movie series The Descendants, had died at age 20. I’m a little out of the demographic that grew up with the talented young star on the TV screen, but I did discover Boyce via The Descendants a few years ago and the cheesy, camp cuteness of the project quickly became a go-to. Directed by Kenny Ortega, the live-action series of musical films focuses on the children of classic Disney characters, from Beauty and the Beast to Sleeping Beauty, and even villains like Maleficent, Jafar, and Cruella De Vil. The basic setup is that the fantasy world is split in two with the “good” children living on a fantastical isle known as Auradon, whilst the “bad” kids live in the slumlike Isle of the Lost.

The Descendants truly begins when the son of Beauty and the Beast decides that by royal decree, the children of the villains should be given the chance to come and live on Auradon. Like most of the best fish out of water stories, the film isn’t really about how the kids don’t fit in, but how they do. Working as a sort of fairytale X-Men, The Descendants focuses on found family and escaping the legacy and impact of toxic parents. In a word, it’s wonderful. 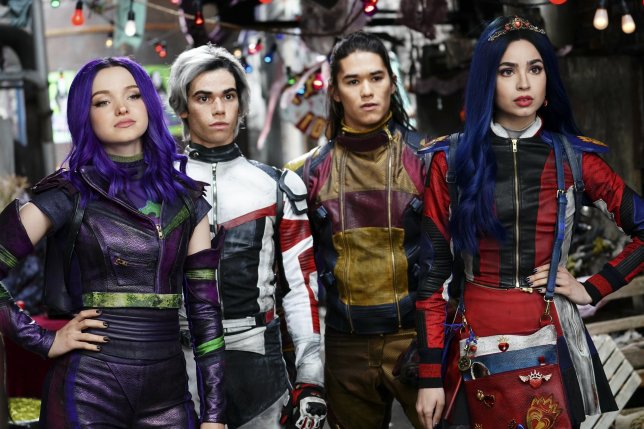 Cameron Boyce plays one of the apparently villainous transfer students, Carlos, the son of Cruella De Vil. But the reality is that he’s a charmingly sweet kid who has a devastating fear of dogs due to the fact that his mother has spent a lot of time justifying her penchant for killing them. Boyce is a bundle of anxious energy and enthusiasm; Carlos wants nothing more than to throw himself into the normal school life of the kids at Auradon High, even if he’s occasionally tempted to slip back into his bad guy ways.

In a world of overly serious blockbuster hits, The Descendants offers up a fun, fresh, and unabashedly kind vision of entertainment. It crafts something close to a Disney princess cinematic universe but on the scale of a made-for-TV movie series more concerned with choreography and matching leather jackets (all the bad guys have them) than explosions, easter eggs, and all the other trappings that often weigh down shared-world franchises.

Boyce, alongside co-stars Dove Cameron, Booboo Stewart, and Sofia Carson, became a beacon for reinvention, second chances, and the fun of being a teen. In a dark world, The Descendants and Boyle offered up some light, laughter, and love. If you’re a fan of all things Disney, the films are a must-see, and if you’re not but just need something to brighten your day then Boyce’s unbridled passion and talent set in the sparkling fantasy world of Auradon will deliver.