Big Drama: What Roleplaying Games Can Learn From Pro Wrestling

Pro wrestling is undergoing a bit of a cultural renaissance and has been for most of the decade. Once the final shackles of kayfabe (i.e. the wrestlers’ code of honor which keeps it all under wraps) fell away, WWE finally found its creative footing by acknowledging the artifice. Local indie promotions have flourished with the advent of cheap online streaming, while Japanese pro wrestling, arguably the best in the world, is more accessible than ever.

What does this have to do with tabletop gaming? A lot, as it turns out. Fans of roleplaying games can learn a lot from pro wrestling in terms of how dramas play out and the ways real and unreal (or shoot and kayfabe, in wrestling parlance) work in tandem to create fun, meaningful moments. Plus, there’s a really cool pro wrestling roleplaying game we played on International Tabletop Day, proving that you don’t necessarily need to import the stylistic tics of pro wrestling to your game, you can actually play pro wrestling.

Drama You Can See

If you’ve been a gamemaster for any length of time, you’ve experienced some variation of the missed dramatic opportunity. Most of us aren’t actors or screenwriters, and roleplaying isn’t exactly stage acting anyway. It can be easy to shoot a little too high in the quest for drama, leaving a plot thread or dramatic exchange a little too subtle for the way a gaming table usually works.

Pro wrestling charts a path forward. The characters are big and brash. The storylines are simple at base, with even the most convoluted conflicts tying back to elemental storytelling of conflict, jealousy, and betrayal. Importantly, pro wrestling stories always have an end in sight, a vital fact for defined storytelling. You can do way worse when stumped for how to turn a story concept into a tangible, emotionally impactful roleplaying event than to take a page from pro wrestling: keep it simple, make it big.

If you’ve made a scrappy hero from a small town trying to fight the big rich villain in your Dungeons & Dragons campaign, you’re telling one of the oldest stories in fantasy, in legend, and in pro wrestling. Yes, the colors are big and the characters loud, but remember point one: you have to see it before it’s real. So go all in on what you’re probably already into at your table.

One of the cool things about pro wrestling, and one of the reasons it works so well, is that it embraces the fact that it is both real and unreal at the same time. The athletic feats are very real. People get hurt, they throw each other through the air, and they sometimes fly. But it’s also scripted; Roman Reigns and Brock Lesnar don’t actually hate each other, Vince McMahon employed “Stone Cold” Steve Austin (and was never going to fire him), and Kazuchika Okada was always going to beat Kenny Omega.

In a sense, this mirrors the reality of the gaming table. You’re telling stories in a quasi-impromptu fashion, which isn’t too far off from winging it in the ring. There’s the kayfabe (fake) thing you’re doing, which is telling the story, but there’s also the real (shoot) thing happening at the same time, with the dice, pencils, table, and other detritus of a gaming table.

This can really bug people. There’s long been an argument about the nature of immersion in roleplaying games, whether it’s possible or even desirable in the first place. Rehashing it or even picking a side isn’t really the point, here, but there is a kernel of profundity in pro wrestling’s resolution of real/unreal: don’t resolve it at all. Embrace the duality and all of the absurdities it brings.

All Eyes On You

Let’s talk about World Wide Wrestling, Nathan Paoletta’s roleplaying game about pro wrestling. Full disclosure: I served as editor on both WWW and its supplement, International Incident. But before I was asked to work on the project by Nathan, I was a fan. I’d catch little dribs and drabs of how he was hacking Apocalypse World to make it do what he wanted, and I was in love with what he was doing. 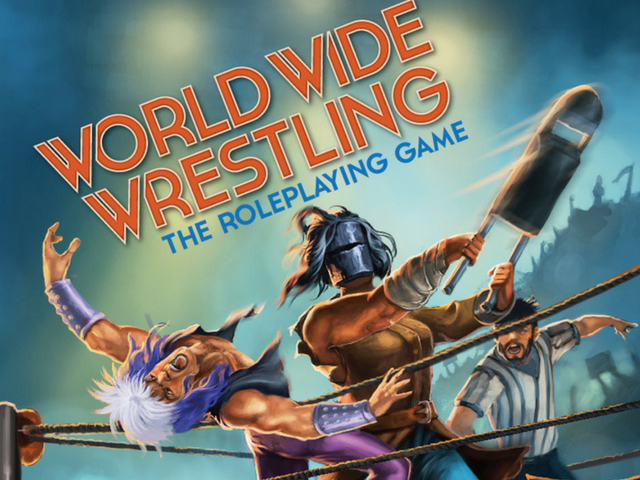 One of the biggest things Nathan ended up making was what he called the Imaginary Viewing Audience. The dilemma was pretty simple: if success in pro wrestling is determined by audience reaction, how do you succeed when there’s no audience? Well, you make one. Then you track it.

This isn’t terribly far removed from Primetime Adventures‘ fan mail, but it’s made both more explicit and real-time. You succeed because a mass of people, not just your friends at the table, say so. It’s a powerful shift in gauging success and altered how I thought about a whole range of games; I even cribbed it for ACTION MOVIE WORLD. Because once we start thinking about success explicitly in terms of entertainment, even the self-contained fantasy campaign shifts in tone. Even if you don’t use the Imaginary Viewing Audience, just thinking about it turns your action at the table into the stuff of movie and story.

Another thing WWW does very well, and it’s again about making subtext into text, is telling you the entire point is working together. It would be very easy to make the game zero sum, but an entertainment venture doesn’t work that way. The only way I get popular is if we get popular. So WWW tells you that a match isn’t about beating the other player or even the NPCs. It’s about entertaining both yourselves, as players, and the Imaginary Viewing Audience.

This can be ported over to any number of games. Honestly, most roleplaying games try to stress this, but rarely as forcefully and elegantly as WWW does. Because the subject matter demands it. Pro wrestling in action is about trust—trust that the other wrestler won’t hurt you, trust that you’ll both try to get each other over (read: more popular), and trust that you won’t drive each other nuts in close quarters traveling together 300 days of the year.

The stakes at the gaming table are a lot lower, but take a queue from wrestling. Trust one another. Yield to other players when their characters need to “get over”; trust that they’ll do the same in turn. A table built on trust makes for the best storytelling venue of all.

Love wrestling? Tell us about your favorite wrestler in the comments below! And if you want to watch some awesome wrestling RPG action, catch the full game of World Wide Wrestling from International Tabletop Day exclusively on Alpha (you can get a free 30 day trial at projectalpha.com if you’re not already subscribed.)