Have you plowed through all of Tiger King and are now finding yourself with nothing to watch? Have you binged everything from out-of-season Hallmark Christmas movies to increasingly obscure British crime dramas? Tired of rewatching your favorite retro anime of yesteryear? Well, good news: there is a metric ton of awesome new anime series coming out this month to keep you company as we continue to flatten the curve of COVID-19. I know, with the icy grasp of winter receding for another year and the flowers beginning to burst into bloom, we find ourselves…stuck indoors apart from the occasional jaunt to the grocery store or a properly socially distanced walk around the block. But these excellent new anime series will take the edge off as we continue to do our part to kick coronavirus to the proverbial curb. 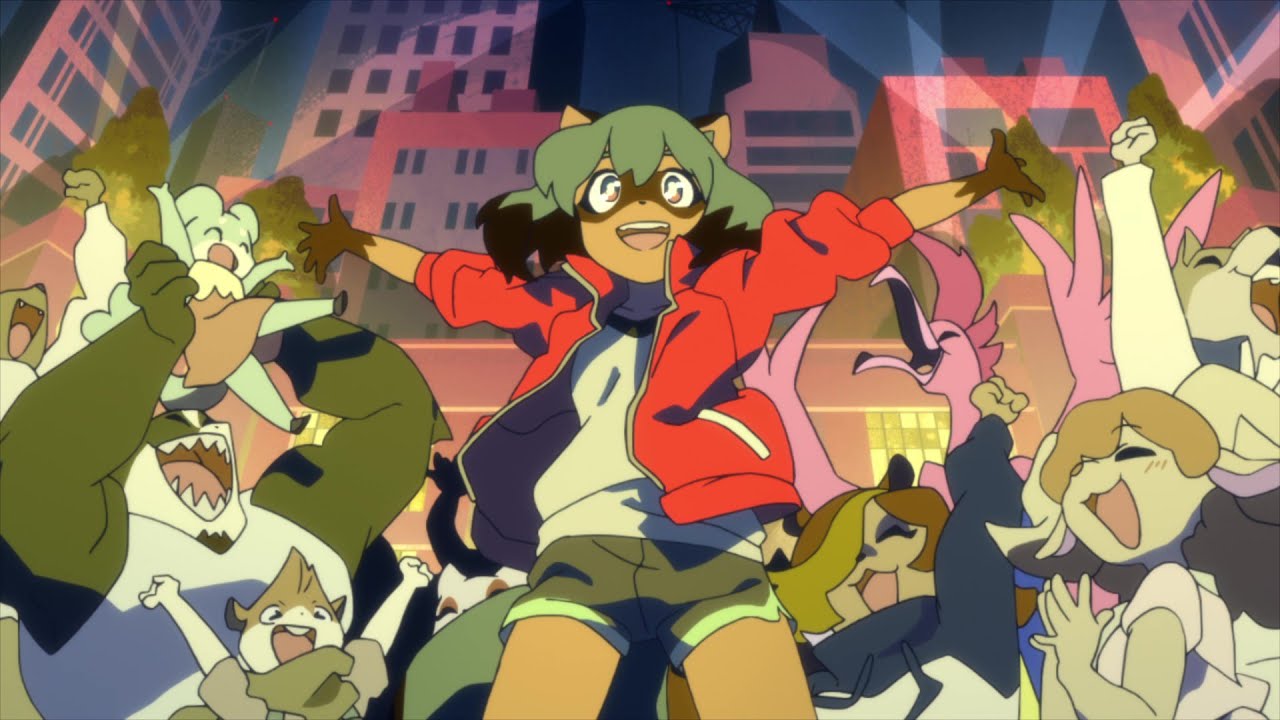 A quick note: There are plenty of high-profile returning titles like Fruits Basket, Food Wars, Kaguya-sama: Love Is War, and Ghost in the Shell: Stand Alone Complex, just to name a few. That said, this is focusing primarily on new anime, so if I don’t mention your favorite, please know this is a personal attack, Kevin.

Another quick note: Due to the ongoing COVID-19 pandemic, some release dates may be delayed or have yet to be announced, while streaming services offering things like simuldubs have to modify their production pipeline to protect their employees. We will continue to update this article as new information comes out.

The fact that the galaxy brain animation geniuses at Studio Trigger made this should be enough of a reason for anyone who has seen Promare, SSSS.Gridman, or Kill La Kill to tune in. BNA, which stands for “Brand New Animal,” takes place in a world where humanoid animals begin to emerge after centuries in hiding. One day, a high schooler named Michiru suddenly transforms into a tanuki-human hybrid and must travel to Anima City, a bustling Zootopia-like metropolis, in order to solve the mystery of why she metamorphosed into an animal. What follows is a wild ride that will tackle everything from secret plots to doomsday cults to deeply ingrained prejudices and beyond. And it may just awaken something inside of you. No judgment; live your truth. | (Streaming TBD on Netflix)

In Norse mythology, Gleipnir is the dwarven-forged chain that binds the powerful wolf Fenrir. Unfortunately, in Gleipnir the anime, no chains can hold Shuichi Kagaya’s inner wolf back. One morning he awakens to discover he can turn into a giant monster that looks like a wolf mascot costume with a zipper down its back. When he rescues his classmate Claire from a warehouse fire, he accidentally outs himself. Seeing an opportunity, Claire manipulates Shuichi and uses him like a murdery human fursuit in her quest to her missing sister. So, you know, maybe your high school experience wasn’t so bad after all.  | (Streaming April 5 on Funimation)

My Life as a Villainess: All Routes Lead to Doom

Have you ever played a game so much that you know every inch of it? Every pixel, every hidden secret, every storyline — all embedded within the labyrinthine halls of your mind palace. Usually, you’ve learned all of this from the perspective of the hero, the player-controlled protagonist. But what if you suddenly found yourself transported Jumanji-style inside of your fictional game and you weren’t the hero, but instead you were the villain? Well, that’s exactly what happens in My Next Life as a Villainess: All Routes Lead to Doom!. When wealthy heiress Katarina Claes is trips and hits her head on a rock, she is flooded with memories of a past life and realizes she’s actually living inside of a dating sim called Fortune Lover, and she’s playing the villain. Unfortunately for Katarina, all of the storylines lead to increasingly grim endings for her, so she’s going to have to use her expert knowledge of the game in order to avoid triggering in-game events that lead to her demise. Honestly, it feels like the breath of fresh air the crowded isekai genre needs. | (Streaming April 4 on Crunchyroll)

Set in the late 19th century, Appare-Ranman! tells the story of a brilliant but awkward engineer and a cowardly samurai who find themselves penniless, adrift at sea, and far away from home. To make enough scratch to get back safely, they build a steam-powered car and enter the Trans-America Wild Race, hoping to use the prize money to fund their return trip. What follows is crazier than anything you’ve seen in Ford v Ferrari—the duo must navigate bloodthirsty bandits, inhospitable environments, dastardly rivals, seemingly insurmountable odds, and much more as they race their way across the American heartland in a desperate bid to get rich quick. | (Streaming April 10 on Funimation)

Wave, Listen to Me!

Hear me out on this: Fraisier, but make it anime. Okay, Wave, Listen to Me! isn’t quite a one-to-one parallel to everyone’s favorite salad-tossin’, egg-scramblin’ pop psychologist, but it is an anime based on Blade of the Immortal creator Hiroaki Samura’s manga series about a young woman stumbling into a career as a radio talk show host. Heartbroken and drinking away her sorrows, Minare Koda finds herself unexpectedly pouring her heart out one night to a radio station worker at a local bar. The next day, she hears her sob story being played over the radio waves, leading her to storm the studio to confront the producer. This impulsive confrontation turns into a spontaneous talk show and the official launch of Minare’s career in the wild world of radio. | (Streaming April 4 on Funimation)

When there’s something strange in your neighborhood in Meiji era Japan, who you gonna call? Not the Ghostbusters! They’re still over a century away from opening up shop, and even then they are limited to New York City. No, you’re going to have to enlist the poet-turned-private eye Takuboku Ishikawa and his assistant Kyosuke Kindaichi to crack the case! Whether or not they’re afraid of no ghosts, some ghosts, or all ghosts remains to be seen, but this anime based on Kei Ii’s 1999 mystery novel of the same name looks so good, it’s spooky. | (Streaming April 13 on Crunchyroll)

If you’ve been reading our seasonal anime guides for any amount of time, you know that I’m an absolute sucker for sports anime because there’s just something magical about the way they blend constant competition arcs, over-the-top “secret moves,” high-stakes drama, and overwrought inner monologues. So you’d better believe that when I saw a listing for a show that basically looks like A League of Their Own: The Anime, it immediately went on the list. Okay, maybe this isn’t the story of the women breaking into baseball during wartime, but it does look like an epic story about a group of ambitious high school students trying to fulfill their dreams of baseball greatness. And considering we have absolutely zero sports to look forward to right now, this is the perfect substitute. | (Streaming April 1 on Funimation)

What if an entire anime were one giant tournament arc? That’s the basic premise behind Tower of God, the second offering in the Crunchyroll Originals series. The story centers on two young people, Bam and Rachel, who grew up trapped beneath a massive, mysterious Tower. One day, Rachel manages to enter the Tower and Bam follows suit to try and find her, only to discover that each floor is the size of North America and has its own unique cultures, languages, and challenges to overcome before the next level can be reached. Based on the hit South Korean Webtoon comic of the same name, Tower of God is already a certified hit thanks to its striking animation, ambitious scope, and absolute bangers from K-Pop sensation Stray Kids. | (Streaming April 1 on Crunchyroll)

What do your parents do for a living? Does it ever embarrass you? Sure, they’re breaking their back to provide for the family, but do you raise an eyebrow over their chosen vocation? Well, that’s exactly the kind of thought process Gotou Kakushi is trying to prevent his young daughter from having in Kakushigoto, a.k.a. Hidden Things. It’s the story of a father who draws erotic manga for a living and desperately wants to keep his daughter from learning the truth about what he does. What follows is a deeply silly father-daughter slice-of-life comedy unlike anything you’ve seen before. | (Streaming April 2 on Funimation)

Want an apocalyptic anime about people with giant robots trying to save mankind through the power of rock ‘n’ roll in a world without music? Then Listeners is for you! Honestly, what more do you need to know? Just watch the trailer and check out this wild-ass series. | (Streaming April 3 on Funimation)

And those are some of the best new anime you need to put in your eyeballs this spring! Which are your favorites? Let us know in the comments below, and be sure to catch up on any winter anime you might have missed too.