First The Mandalorian gave us the gift of Baby Yoda. Then it showed him (literally) pushing Mando’s buttons. It was a hilarious and wonderful scene on its own, but because the Yodaling is purely good that moment also inspired a silly new meme. The internet used that absurd exchange to make the little green lad turn on the space radio, again and again. And no matter what song he keeps putting on—and his protector keeps turning off—it makes us laugh. But there are lots of other reasons to push a button, and they offer plenty of other opportunities for comedy too. Like in this ridiculous fan-made video of Baby Yoda repeatedly turning Jurassic Park‘s system back on.

This short but fantastic fan-video comes from the YouTube channel Adventure Collectibles. It features the Jurassic Park scene where Richard Attenborough’s John Hammond tells Samuel L. Jackson’s Ray Arnold to shut down the entire system. It’s an intense moment in the movie, as the last safeguards between humans and dinosaurs are turned off. However, it’s a lot less intense when you add Baby Yoda to the mix. Then things get really, really funny instead.

The best little fella in the galaxy far, far away keeps turning the whole thing back on every time Ray turns it off. It’s just like on Mando’s ship, expect funnier cause people get eaten in Jurassic Park. The whole thing gets even sillier when Dennis Nedry’s “you didn’t say the magic word” starts blaring in the room. 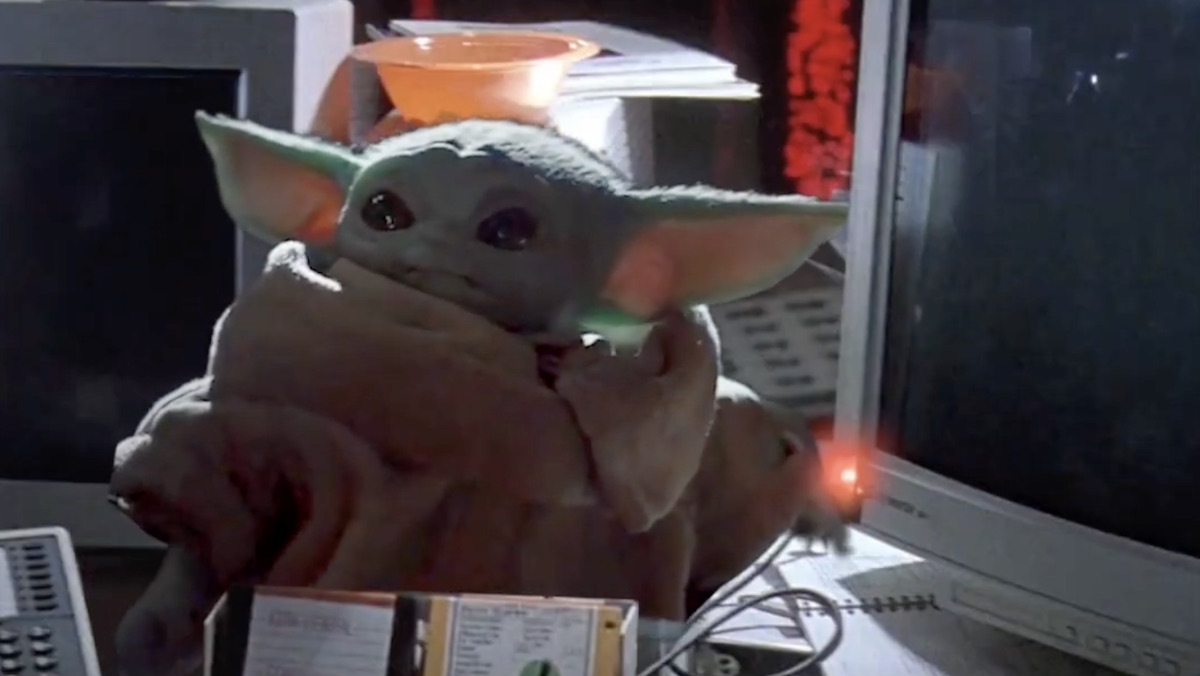 (The “magic word” is no longer “please,” FYI. The phrase “Baby Yoda” has replaced it. We’re far more likely to do something if you reference Baby Yoda than literally anything else you might say. How could we say “no” if you say, “Would you mind picking me up from the airport, Baby Yoda?” Not possible.)

Fortunately this video is as absurd as we would hope. There are definitely some other scenes from Jurassic Park we absolutely would not want to see Baby Yoda appear in. He looks like the perfect snack for a velociraptor, and we don’t need that kind of stress and worry in our lives.

Although, maybe they should put Baby Yoda in Jurassic World 3. It would probably set the all-time box office record. And we know the wee little green kid can handle himself around big scary beasts. Look at how he Force-handled that Mudhorn. A T-rex has a little tiny brain. We’re betting Baby Yoda can easily manipulate any dino with his Force skills.

Disney doesn’t own Universal though (at least not yet), so we know that’s never going to happen. But don’t worry, because Baby Yoda isn’t done with Jurassic Park just yet. Someone thought to combine those two in another way. Because Baby Yoda always knows the right buttons to push to make us laugh.

What was life like before Baby Yoda? We know they used to have memes back then, and we remember loving Jurassic Park, but that’s about it. Either way, he’s here now. And it led to the creation of something even Dr. Ian Malcolm wouldn’t question.