“These creatures were here before us. And if we’re not careful, they’re gonna be here after. We’re gonna have to adjust to new threat that we can’t imagine. We’ve entered a new era. Welcome to Jurassic World.”
–Dr. Ian Malcom

Jurassic World: Fallen Kingdom ended with the dinosaurs breaking free of their cages and entering the domain of people. The last images of the film hinted at the horror that will be unleashed in the trilogy’s third and final film. Now, we know just how terrifying that will be, thanks to the first ever live-action short in the franchise, “Battle of Big Rock.” It’s an intense entry in the story, and a haunting prologue for the carnage we can expect from Jurassic World 3.

Directed by Jurassic World‘s Colin Trevorrow, who co-wrote the short film with Emily Carmichael, “Battle of Big Rock” can stand entirely on its own. It stars André Holland and Natalie Martinez as parents whose campsite is overrun by an awesome dinosaur fight. The “fun” doesn’t last long though, as their camper is then attacked by a T.Rex, in a classic scene from the franchise. It also seems to be inspired by Jurassic Park: The Lost World, which is fitting as that was the only other movie in the series that showed what happens when a dino makes its way into the real world.

The short also gave us this amazing shot. 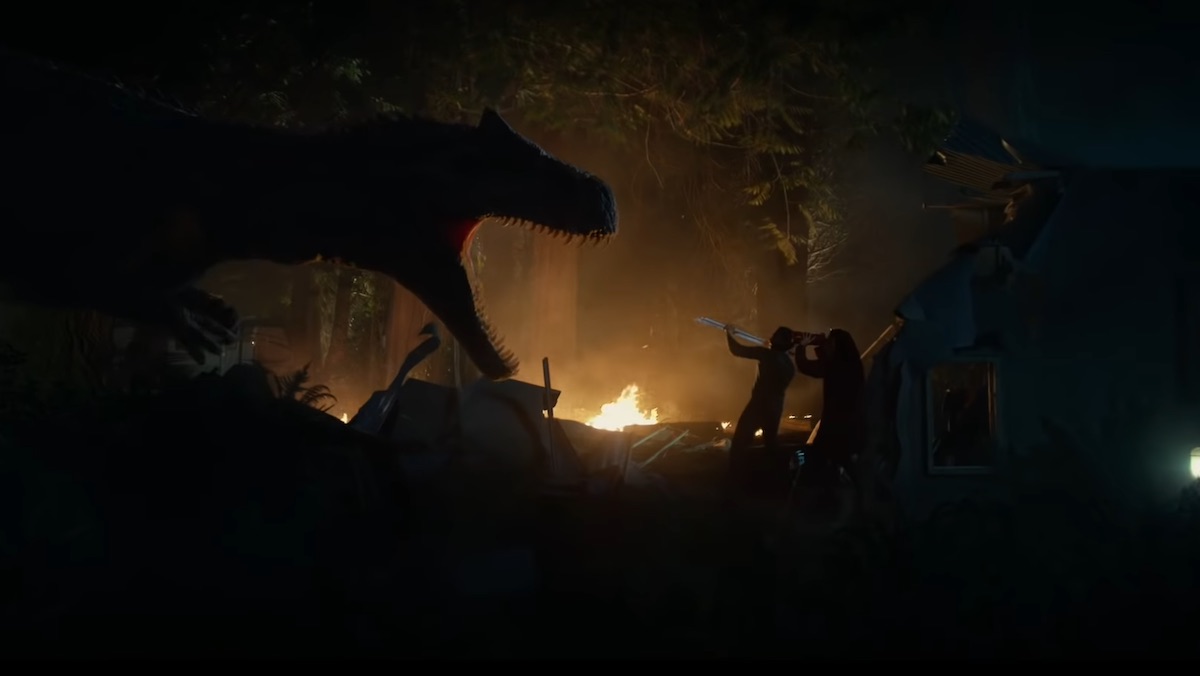 This Jurassic World short works as a perfect prologue for Jurassic World 3, which Trevorrow returned to direct. Set one year after the end of Fallen Kingdom, it shows the dinosaur threat is well known by everyone, as the family is not surprised to see the animals — only that they have migrated as far as they have. A reference to what happened “up north” reveals attacks are not unheard of, either. (Seems like all the more reason to train your eight-year-old to use a crossbow.) If that wasn’t enough to inform us of the state of the Jurassic Park universe going into the next film, the end credits make clear just how destructive and deadly dinosaurs have become, thanks to “home footage” of people encountering the animals during their everyday life.

“Battle of Big Rock” features a T.Rex trying to eat an infant…but if this is a harbinger of things to come in the next movie, by the end of Jurassic World 3 that might not even seem that bad.