A Complete Breakdown of the New AVENGERS: ENDGAME Trailer - Nerdist

A Complete Breakdown of the New AVENGERS: ENDGAME Trailer

The newest trailer for Avengers: Endgame offers lots of new footage and big reveals, but it’s also a look back at where Earth’s mightiest heroes came from. But old footage might be more than just flashbacks—it might be a clue as to where the Avengers are going.

With all due respect to Captain America and his feelings about “language,” holy ****, the latest trailer for Endgame is incredible. But no matter how much we’re freaking out over it, we need to get our emotions under control. Half of all life in the universe is at stake, and we need to break this trailer down. It’s best to leave the first part to the Avengers, but we can handle the latter.

It starts with flashbacks to Tony’s beginnings as a superhero, as we hear him speaking to Pepper about his life and their relationship.

“God it seems like a thousand years ago. I fought my way out of that cave, became Iron Man, realized I loved you. I know I said no more surprises, but I was really hoping to pull off one last one.”

It’s not clear if this is him recording a message from the Guardians ship like we saw him doing in the first trailer (the sequence here does show him and the ship in present day), or if he’s back on Earth (where we see him later in this trailer, before leaving on a new mission).

Next we see flashbacks to a pre-super-serum Steve Rogers from Captain America: The First Avenger. What’s more exciting though is the narration heard here, which is a quote from an elderly Peggy Carter to Steve in Winter Soldier.

“The world has changed. None of us can go back. All we can do is our best, and sometimes the best that we can do is to start over.”

The first trailer showed us Steve looking at Peggy’s picture in his old pocket watch, and now we’re hearing her voice. For a movie we think will involve time travel, those are two very interesting inclusions of a beloved dead character who never had the chance to be with another popular, still alive character. Are we predicting we will see Haley Atwell return in Endgame as Peggy? We’re not not predicting it.

As we hear Peggy’s voice we see that previously released shot of boats tied up around the Statue of Liberty, and another one of an uneasy Captain America at a meeting for survivors. 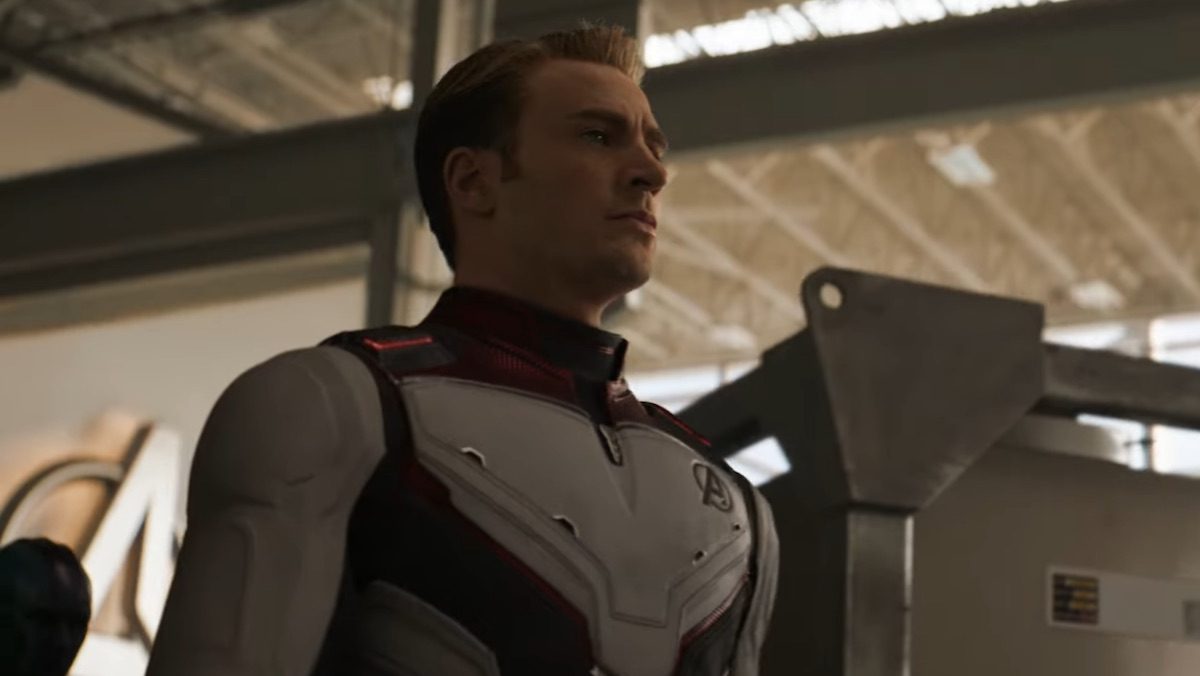 But we’re far more devastated by what we see during the rest of Peggy’s narration. The next shot shows Hawkeye— in his old, non-mohawk hairstyle—teaching his daughter how to shoot a bow and arrow while his wife and son are enjoying a meal in the background. 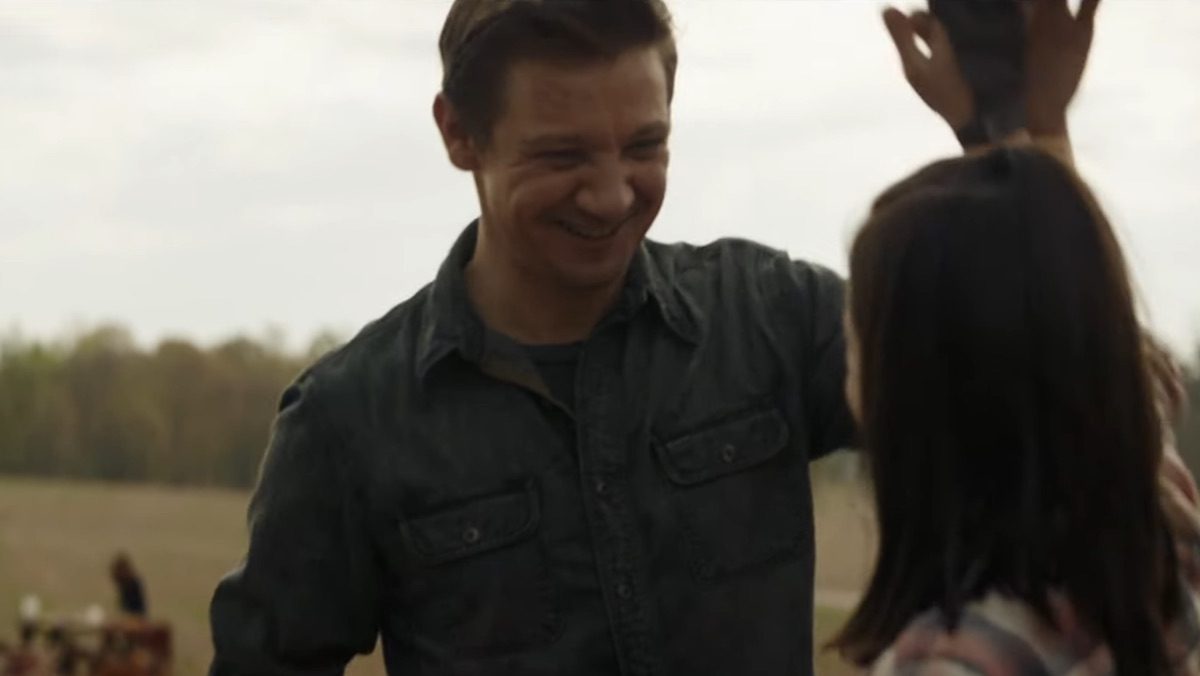 As Peggy continues speaking we see Clint, whose hair is closely shaved on the side of his head, in Japan as Ronin, where Natasha has found him. Only this trailer adds in a new shot of the old friends holding hands, which is devastating in the best way. 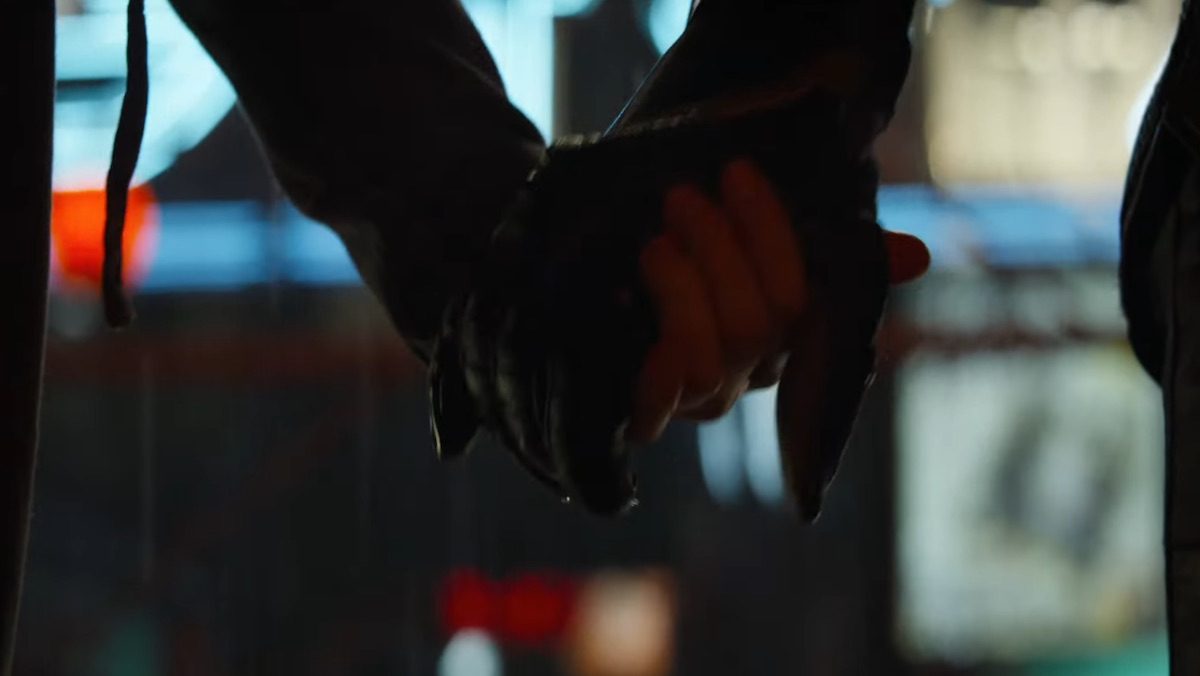 The entire sequence has the undeniable feeling of Hawkeye having lost his entire family in the Snap, which is why he’s now a solo vigilante far from home. Was that archery lesson with his daughter the moment of the Great Dusting? It’s definitely possible, which will definitely kill us.

In case you weren’t already an emotional mess at this point, the trailer then shows a flashback to Steve as a pallbearer at Peggy’s funeral before moving to old shots of Asgard, featuring a sweet moment between Thor and Odin from the first Thor. Those good old days are quickly replaced by a montage of people being dusted in Wakanda as Thor watches, and we hear him say, “I saw all these people die.”

The next voice we hear is that of Steve Rogers, who says, “I keep telling everybody they should move on. Some do, but not us.” When the flashbacks end, we see he’s saying this to Natasha, who now has long red hair instead of the short blonde cut she was sporting in Infinity War (and at the end of this new trailer). Clearly some significant time has passed between the Snap and this conversation, as you can see the evidence of her old blonde style at the end of her natural red hair. 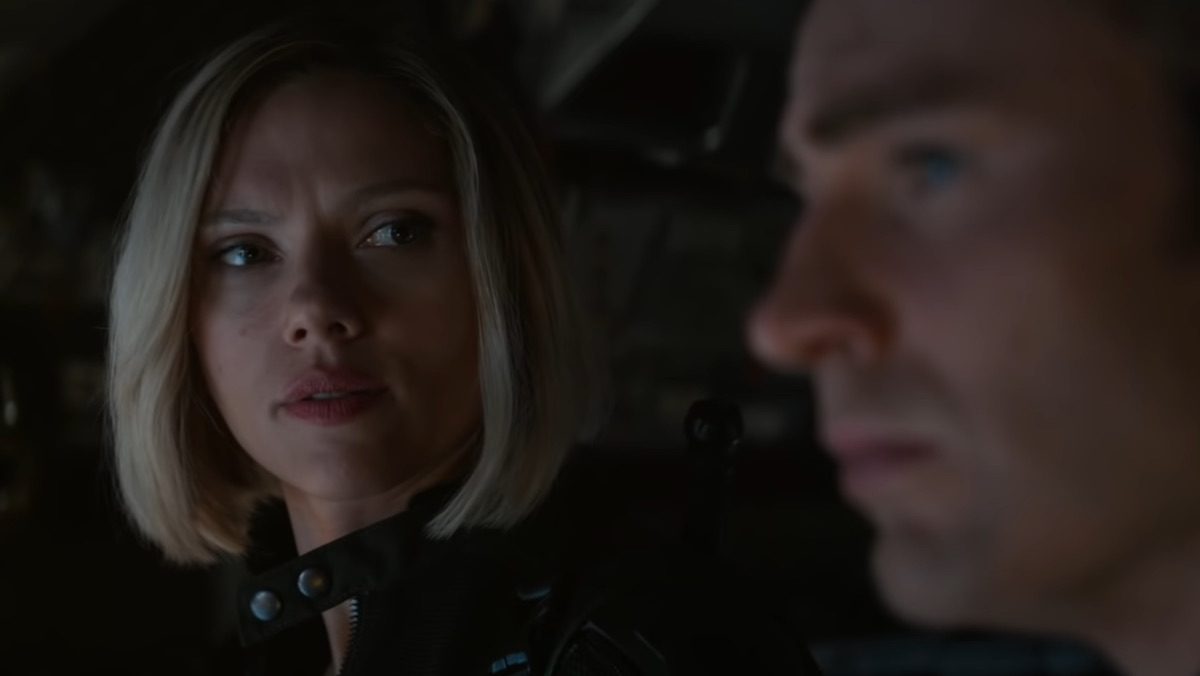 Determined-but-sad-Steve is a lot for our hearts to handle. 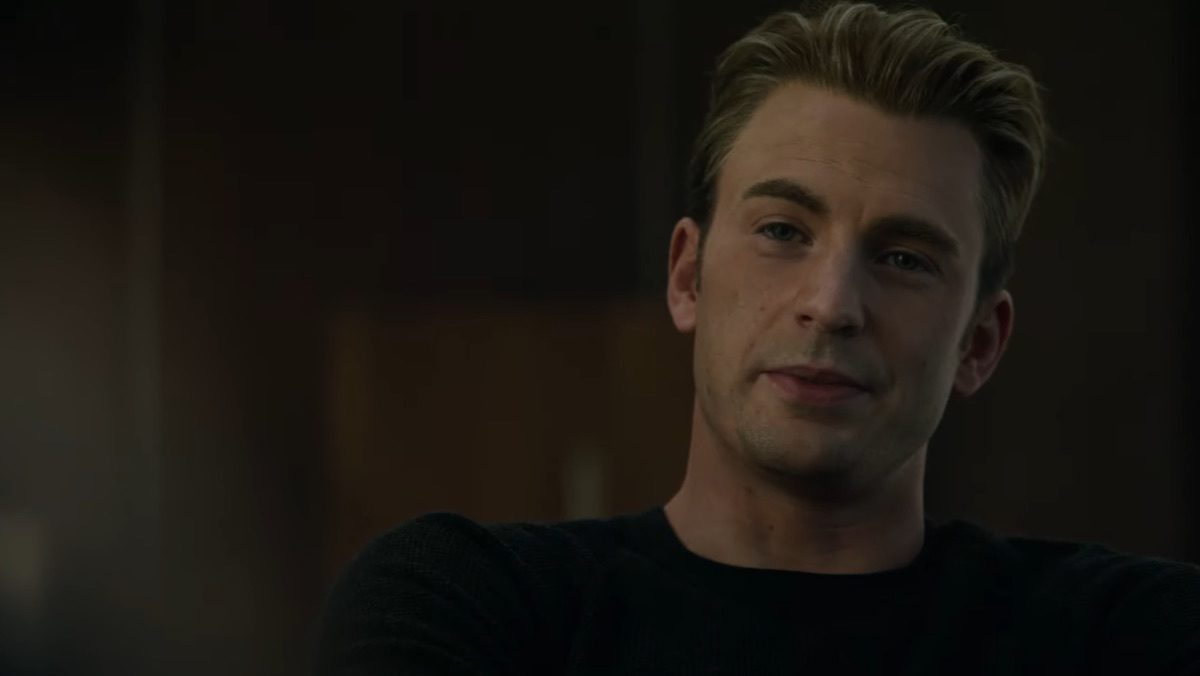 We also get a quick shot of Bruce Banner, though it doesn’t appear to be a shot from the conversation Steve is having with Natasha. Also noteworthy: we never see the Hulk in this trailer, and he’s basically the only surviving Avenger who doesn’t make an appearance. 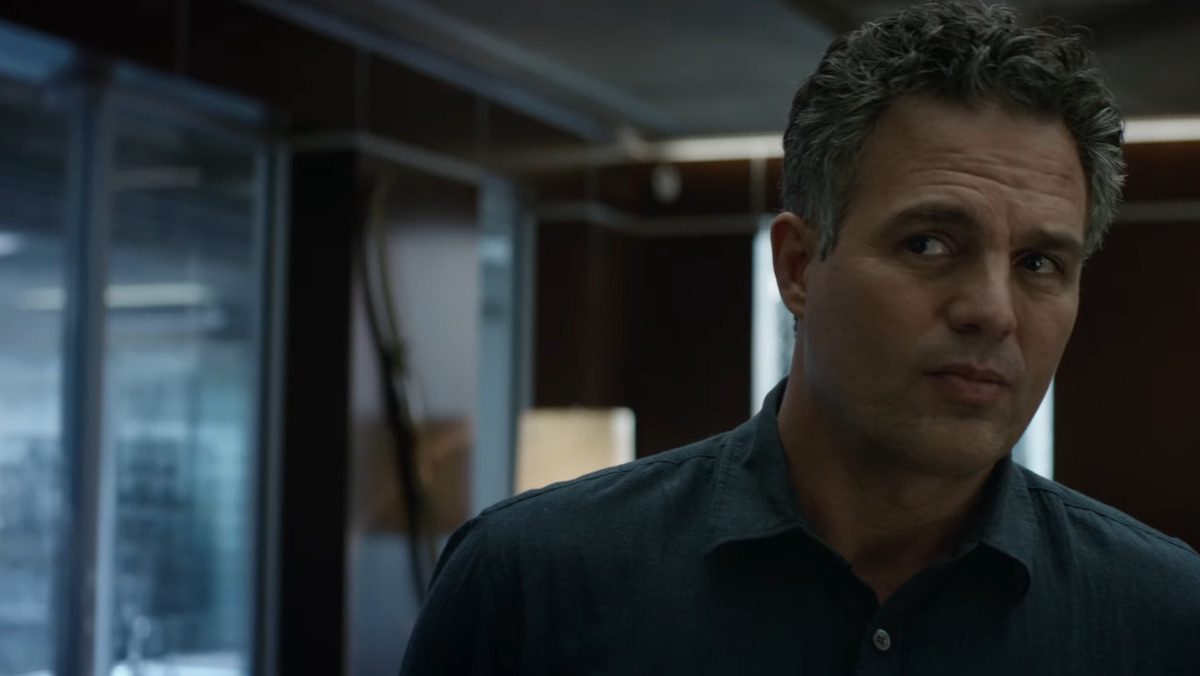 If you’re looking for the biggest clue to the movie’s actual plot, the next section might be it. We hear Natasha say, “Even if there’s a small chance, we owe this to everyone who’s not in this room to try.” She’s clearly talking about this unknown plan by the Avengers, the one she referred to in the first trailer. As she says that we see a very confused Scott Lang in front of a house in desperate need of landscaping. He’s looking at a telephone pole covered in missing people signs.

This moment points to Scott having escaped the Quantum Realm at a much later point in time after the Snap (likely after traveling through a time vortex). Not only are missing signs up, they are weathered and old looking. Also, all of those overgrown hedges needed time to be neglected to get the long. Scott’s confused look suggests this is the first he’s finding out that something “strange” has happened on Earth. 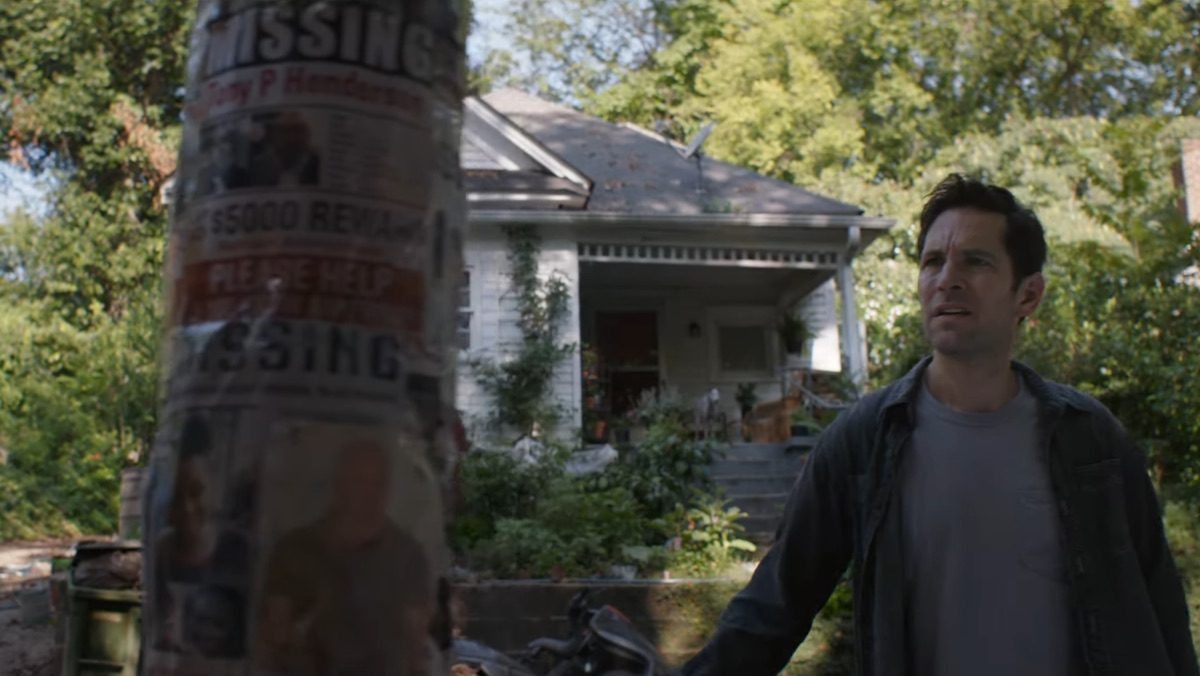 Next we see a Quinjet flying over what looks like New York, followed by a somber Hawkeye (with his mohawk) and Black Widow (with her long hair). 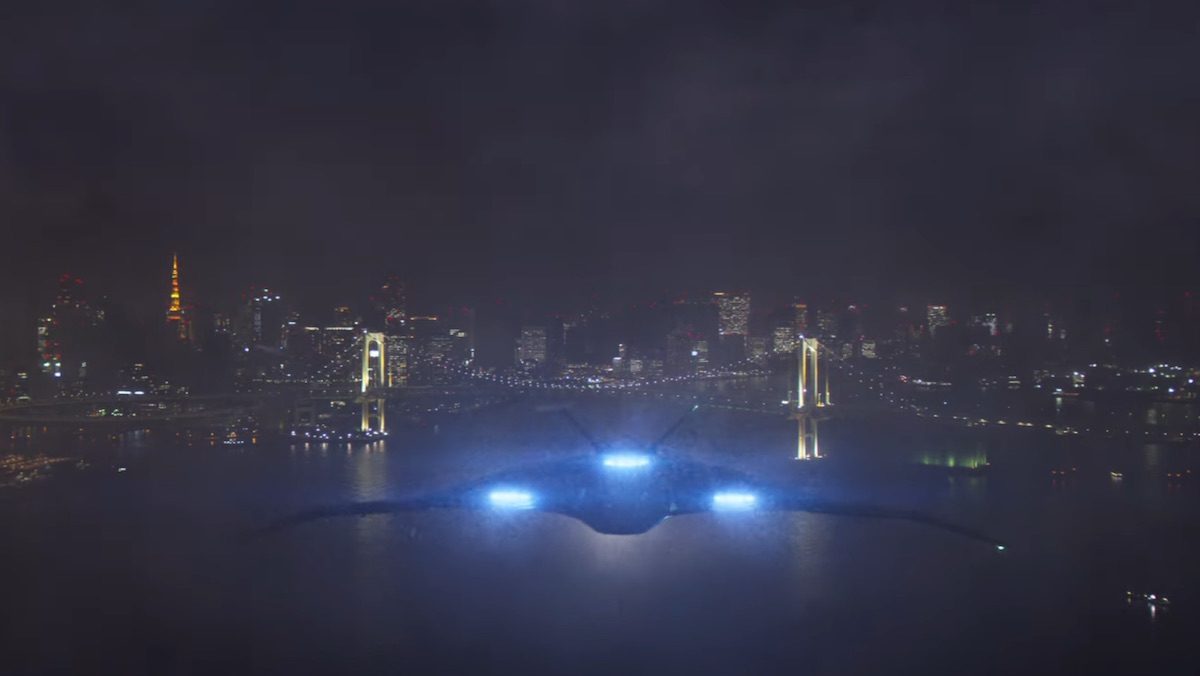 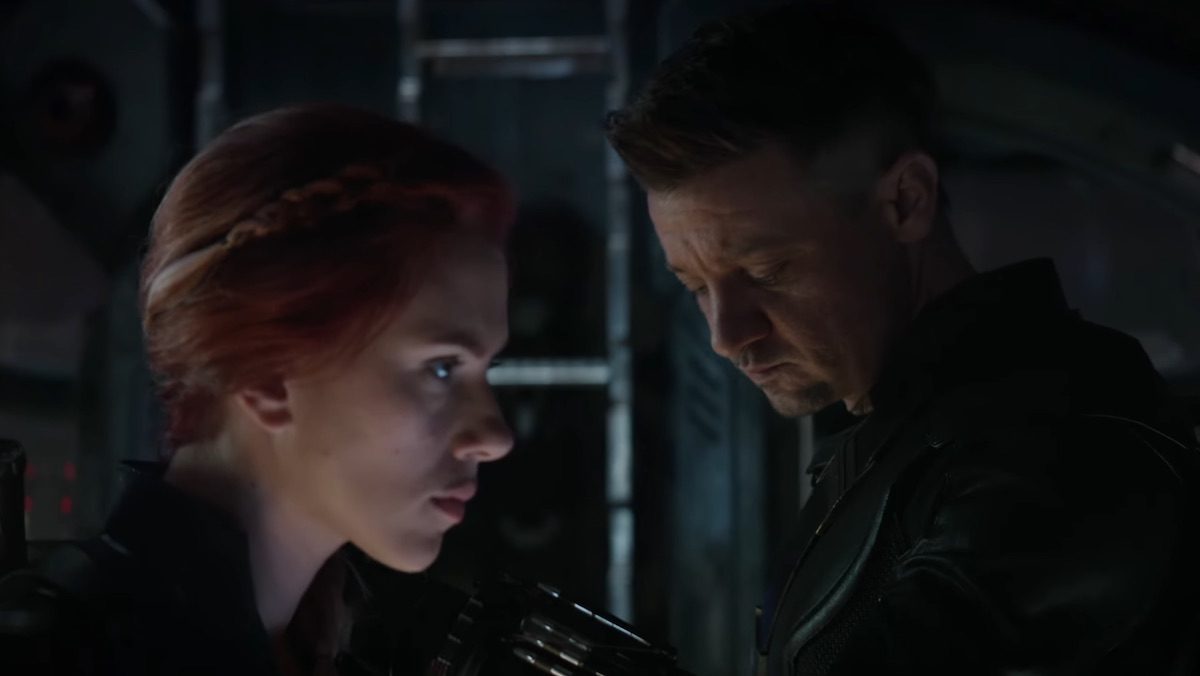 Oh, you thought sad Steve Rogers was bad? Well here’s sad Black Widow and her sad best friend comforting one another to break your heart.

That’s followed by Hawkeye running through a corridor, which then explodes. Later we see him in this same hallway/tunnel pointing an arrow. Is this mysterious place where they were headed to in New York? Their clothes and hair from the Quinjet match-up. 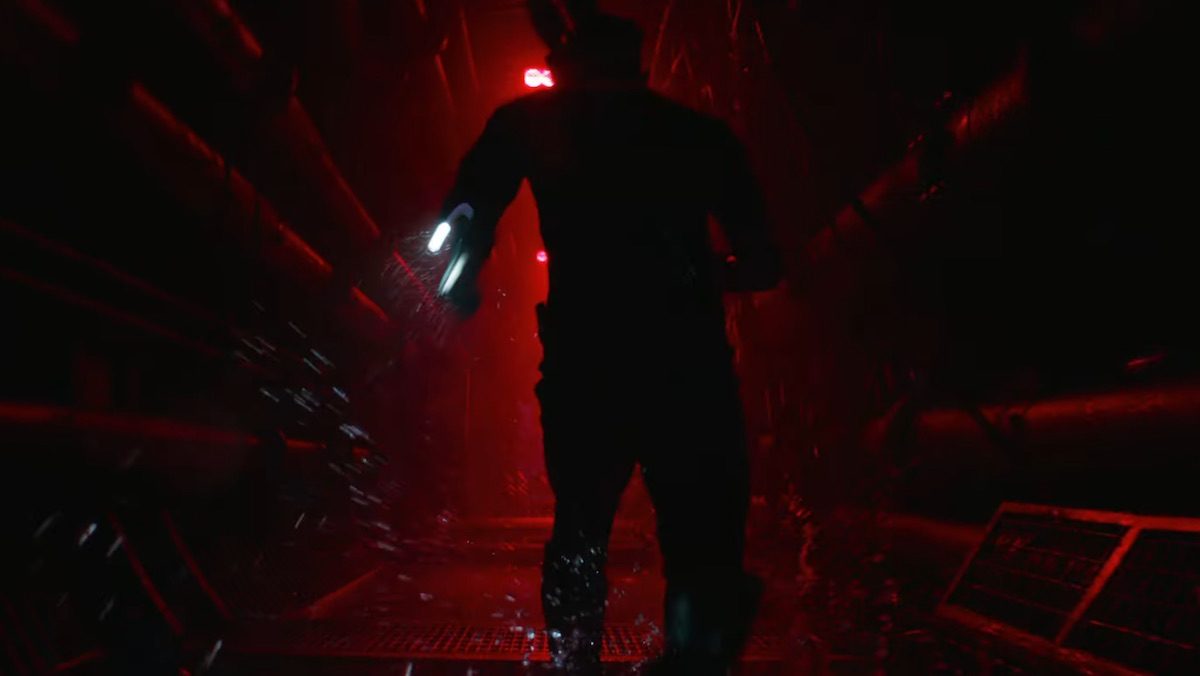 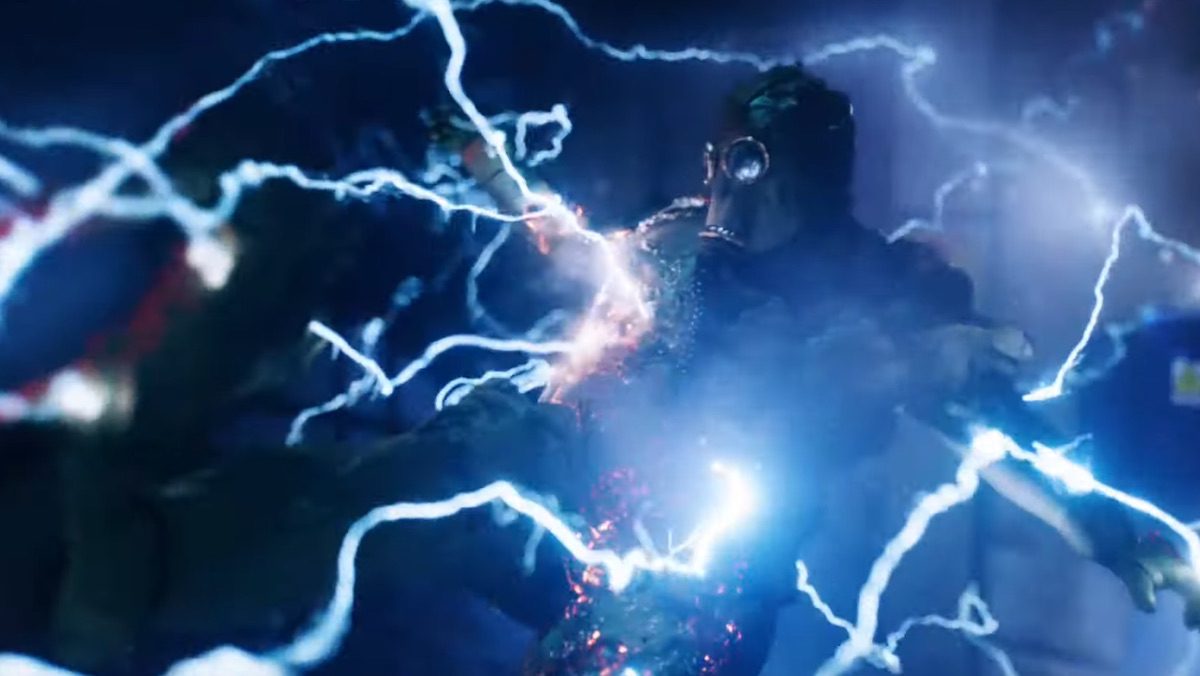 Just like the previous teasers, there’s still very little of Rocket, but at least this time we get to see him with gun in hand on yet another person’s shoulder. Seriously, we might get this image of him and War Machine framed. 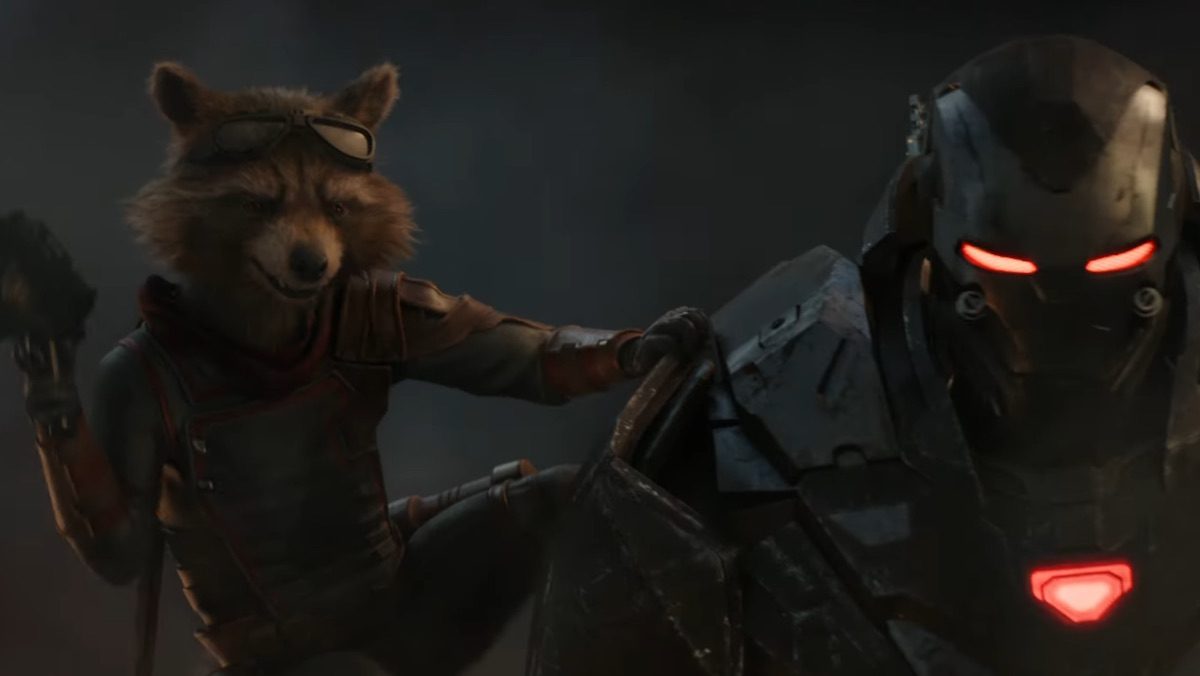 Things really get kicked up next when we see Steve say, “We will, whatever it takes,” to Mohawkeye. It works as a perfect response to Black Widow’s previous quote, but it’s unclear if they happen at the same time or not since we don’t see her here. We do seem to hear her though, because at the end of Steve’s quote we hear Clint responding with, “Whatever it takes,” followed by Natasha saying the same thing. 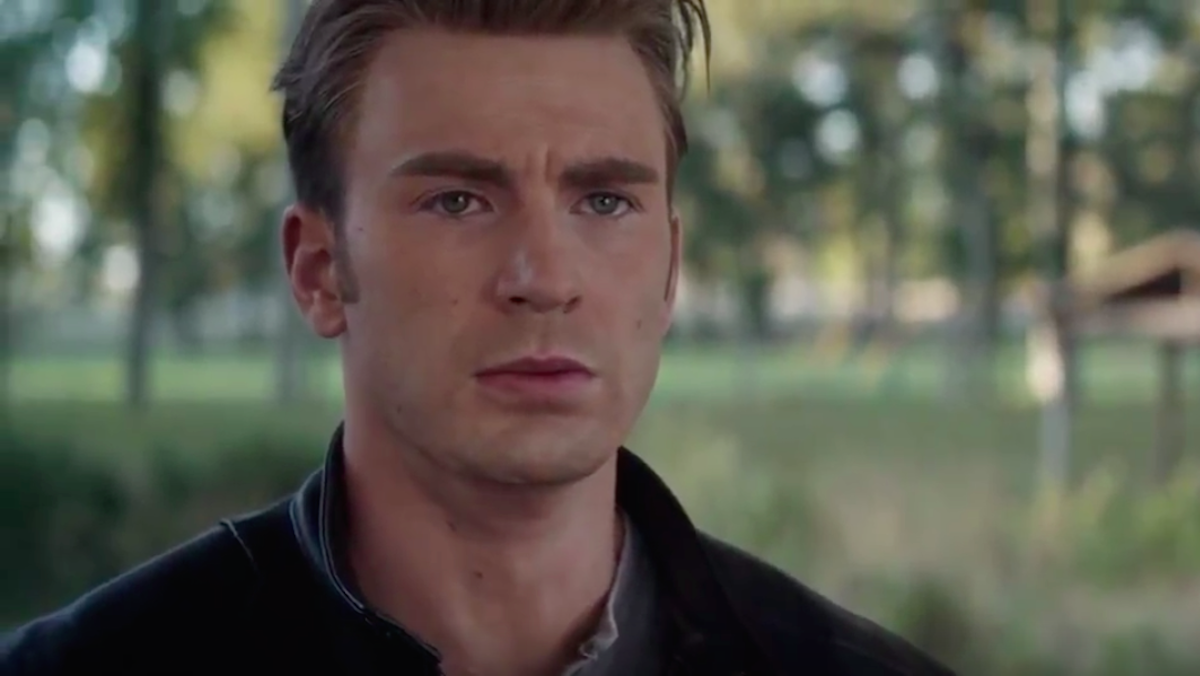 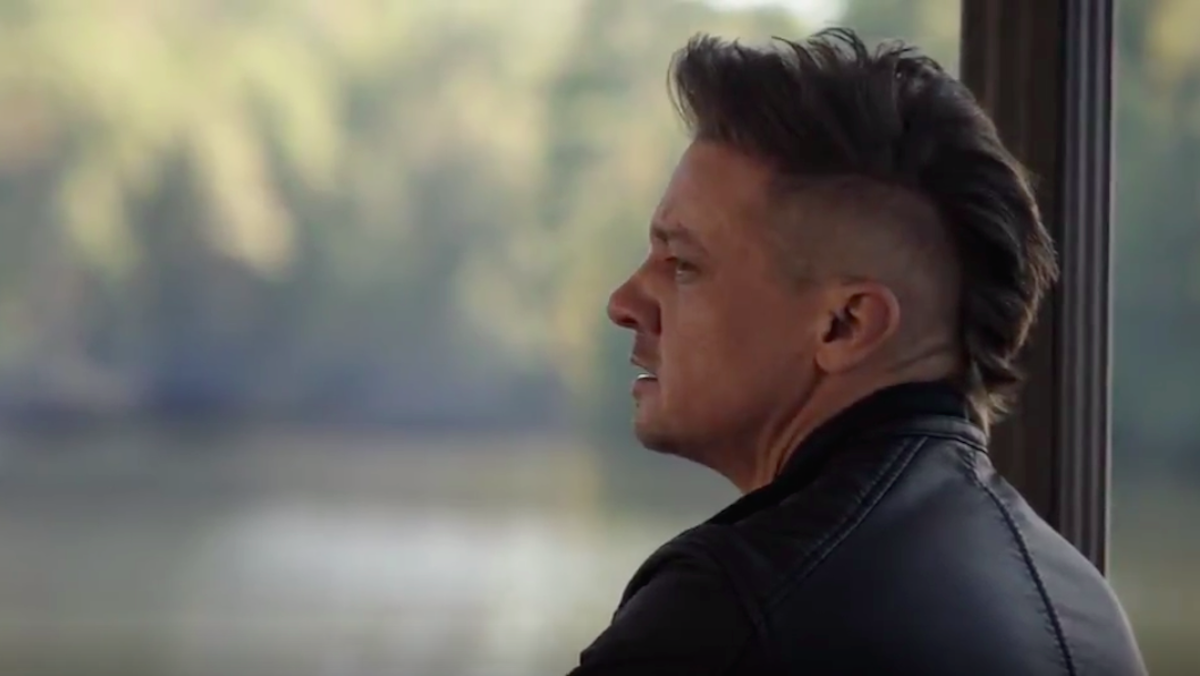 That’s followed by a montage of surviving Avengers readying for battle, starting with a suited-up Ant-Man. 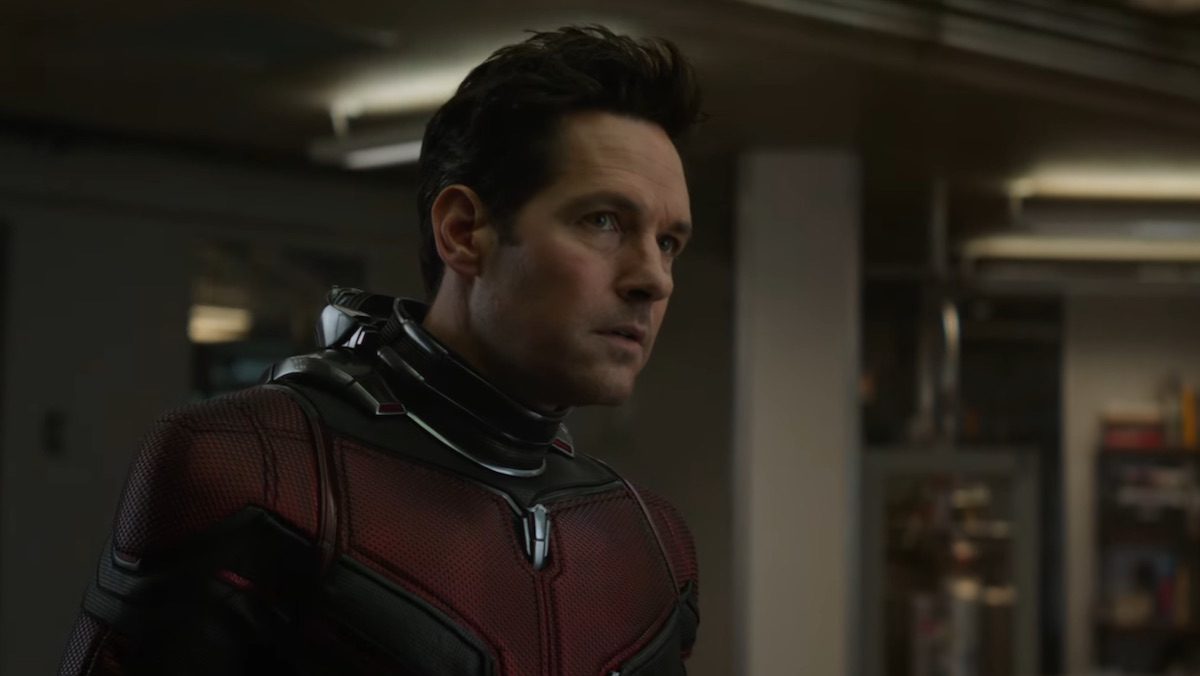 We quickly see an exciting shot of the fiery God of Thunder with Stormbreaker. 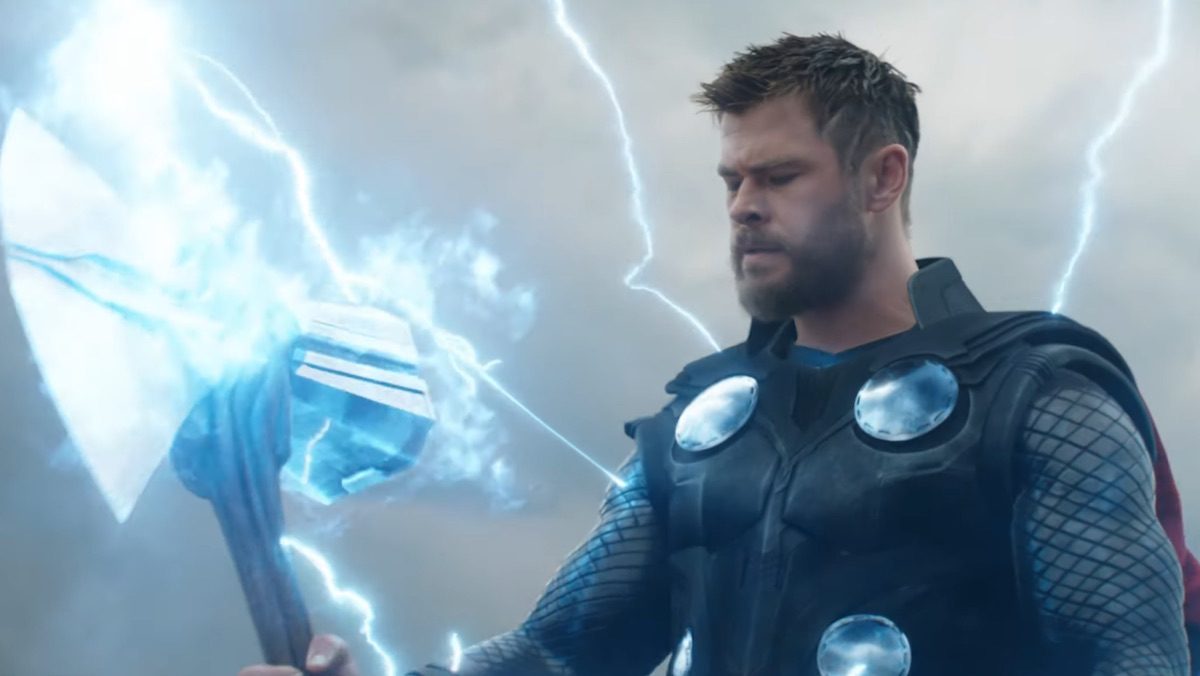 Then we see an angry Nebula attacking someone. We’re not sure, but the orange hue of the distant sky and the wreckage around her means this could be her on Titan right after the Snap. But if that’s where she is, who is she attacking? Tony? He’s the only other person on the planet with her. 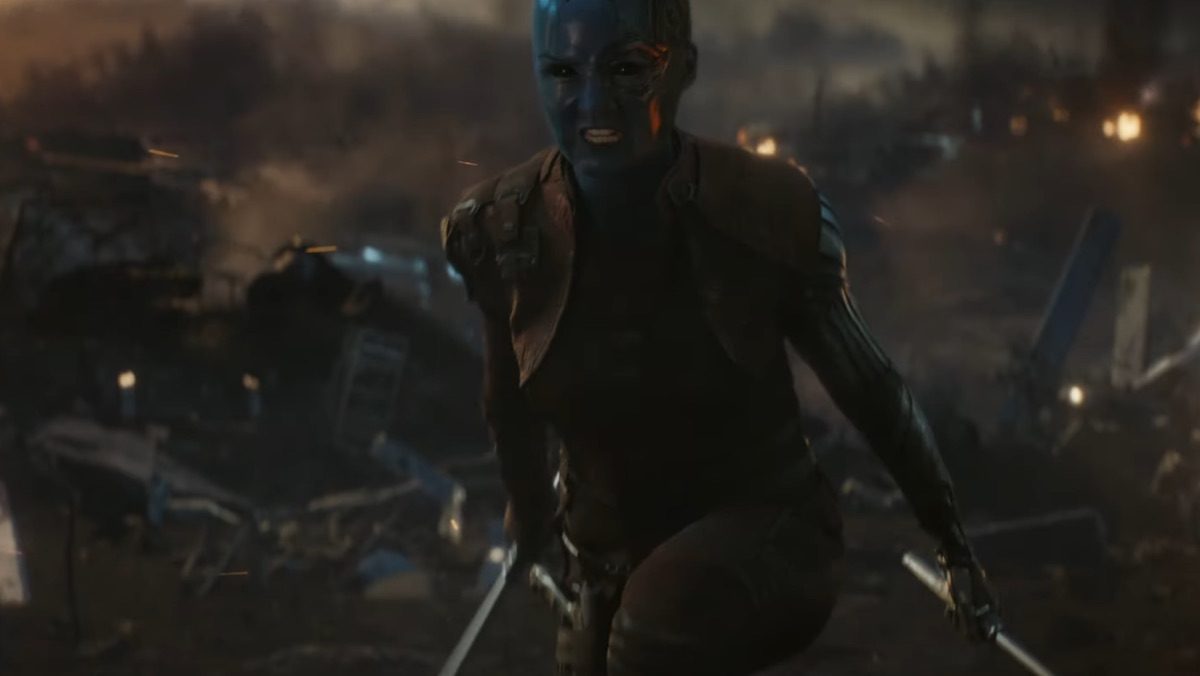 We get a different shot of Hawkeye ready to fire in that soon-to-be-exploding tunnel. 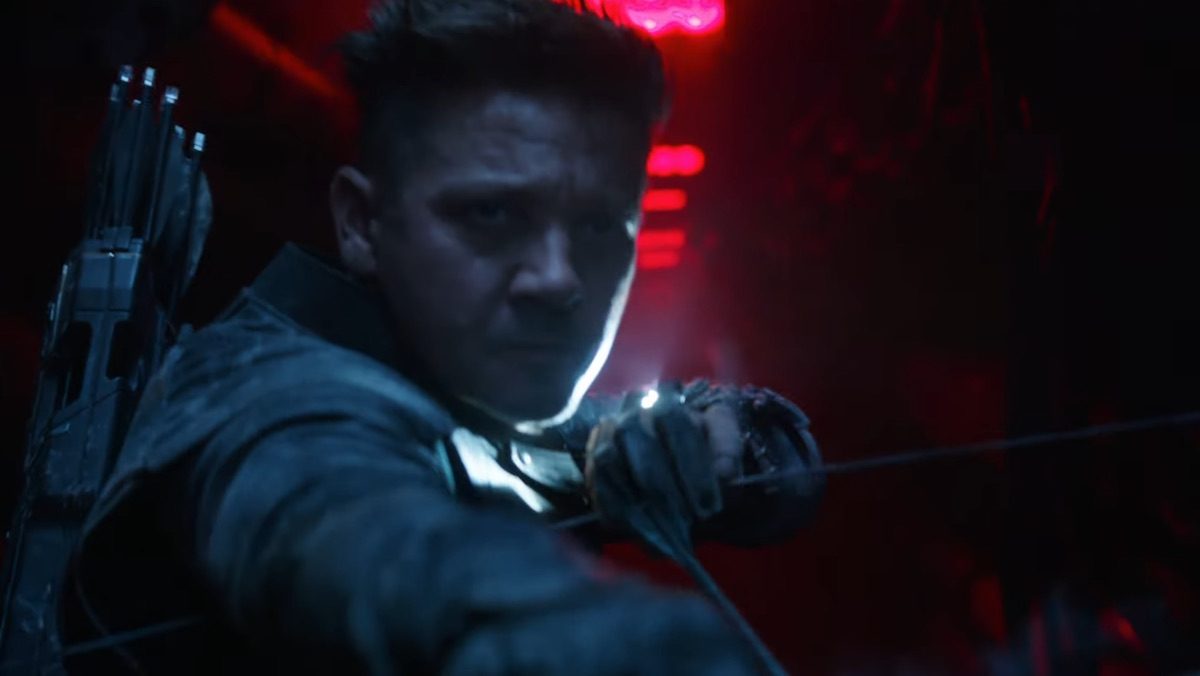 After the same shot we saw in the Endgame Super Bowl commercial of Black Widow doing target practice, we see another repeat image from that promo, as Captain America pulls his old school leather strap tight on his shield arm. But this time we get the added bonus of seeing his dirty, grimy, sweaty face. 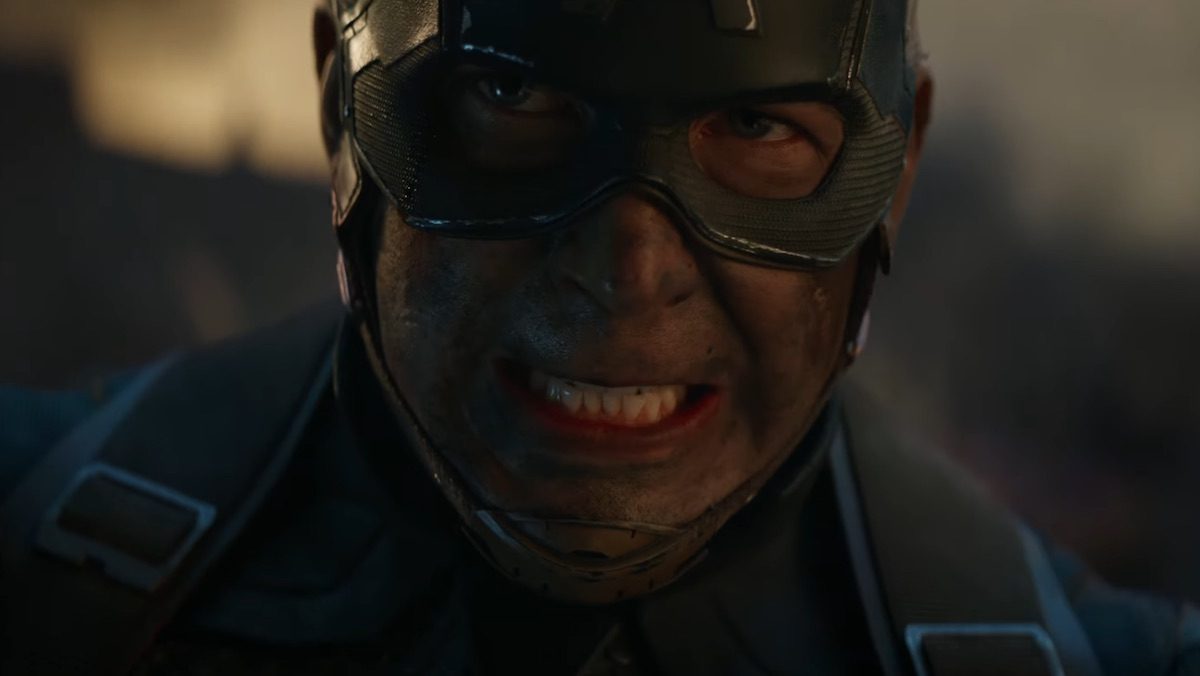 It would appear Cap is getting dirty on some muddy battlefield somewhere, but is he actually fighting at the same place as Scott Lang is in this next shot, in which we see a tiny Ant-Man leap across a pencil? 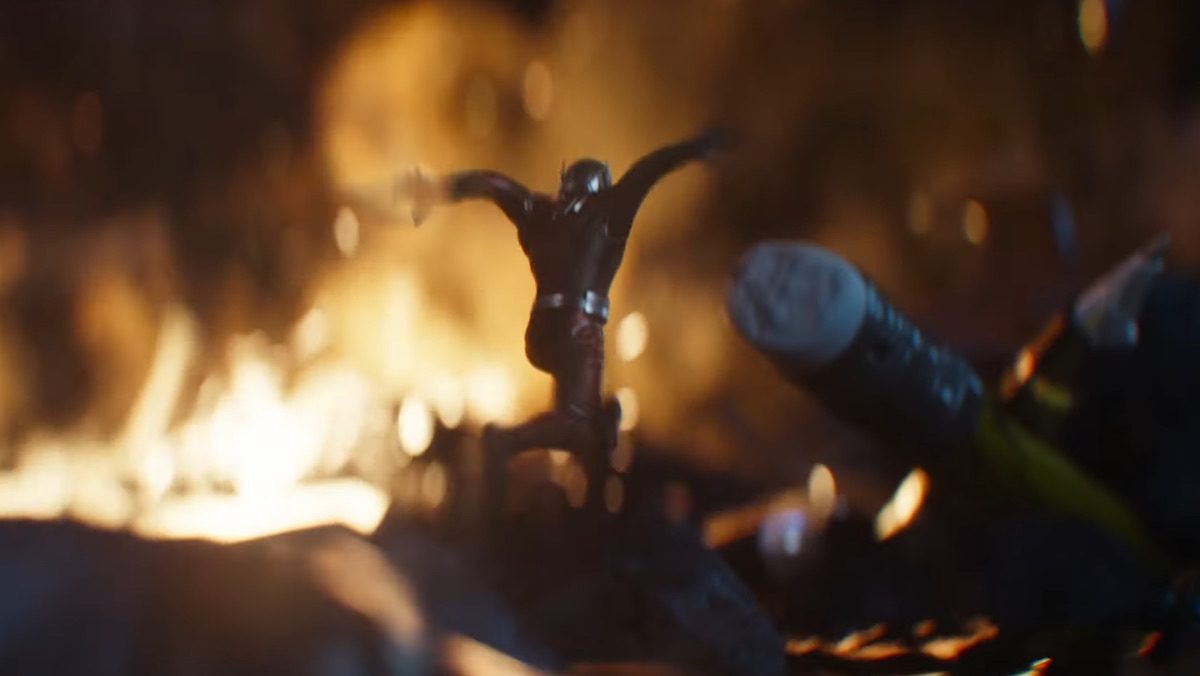 The pencil points to this being Earth, and this fiery location is likely a room, since this appears to be a desk. Look at the loose wire jack. 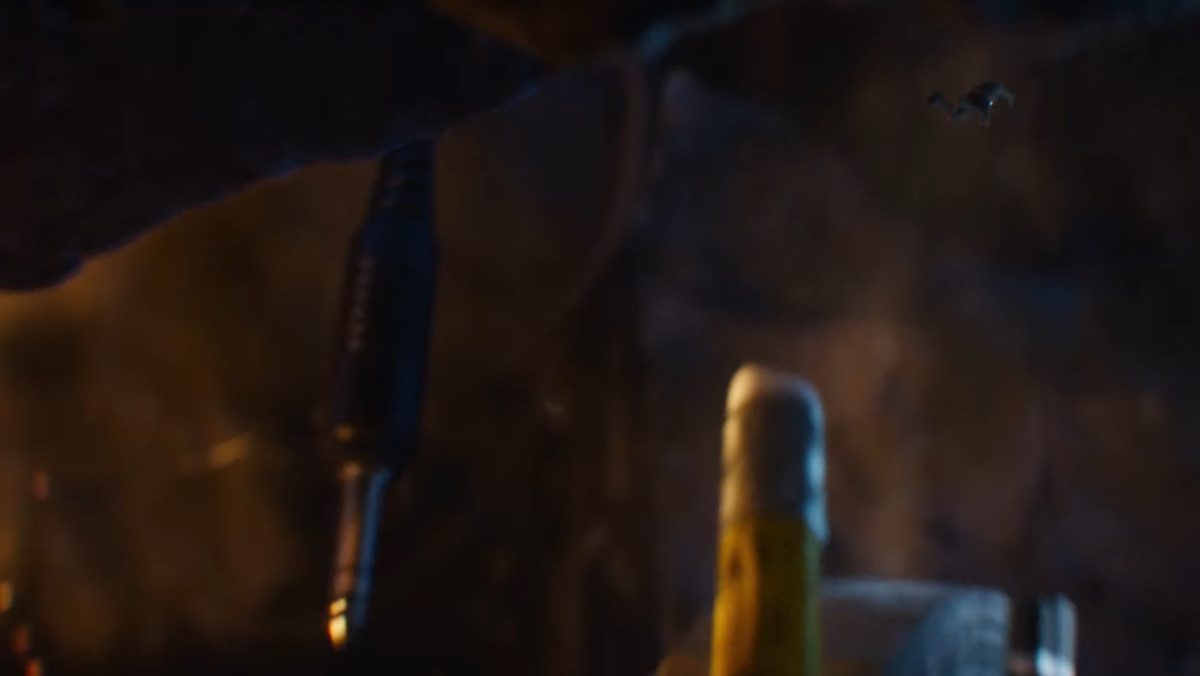 Is it possible these shots of Captain America and Scott aren’t just related, but that they have something to do with Hawkeye’s tunnel sequence? Did the Quinjet go to New York on a dangerous mission so the Avengers could locate something or someone?

We don’t know, but what are sure of is hearing Tony also say, “Whatever it takes,” has us ready to fight Thanos ourselves. 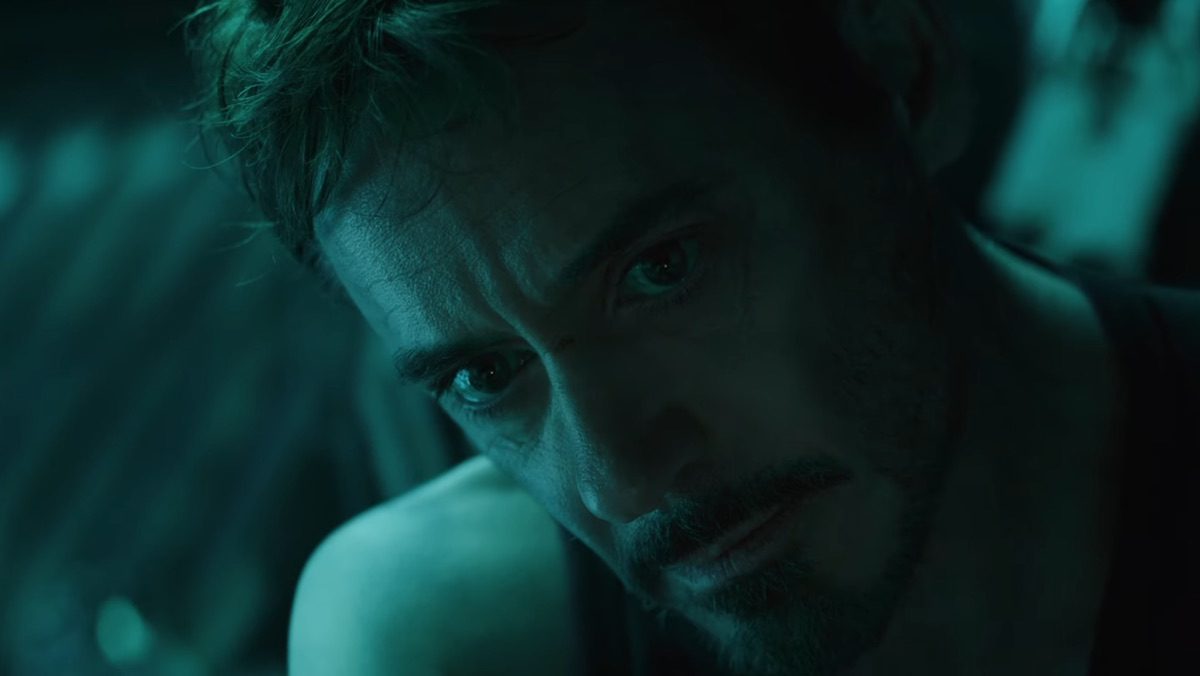 That shot with its distinct blue hue almost certainly comes from Tony’s time on the Guardians ship, where we saw him record his sad farewell in the first trailer. What’s not from the first trailer is the jaw-dropping shot that follows it, as we see the surviving Avengers walking together through the hanger wearing all new, matching(!) super suits.

He’s followed by his old friend Ant-Man, as well as new team member Nebula whom we now know will make it to Earth at some point. 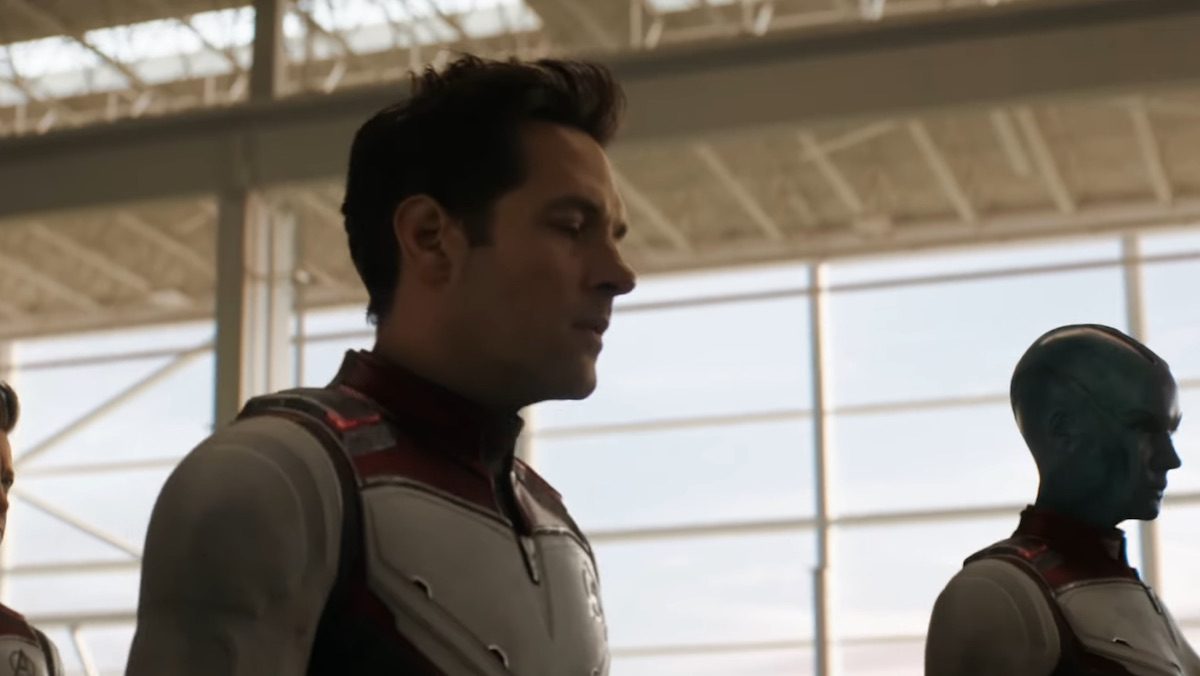 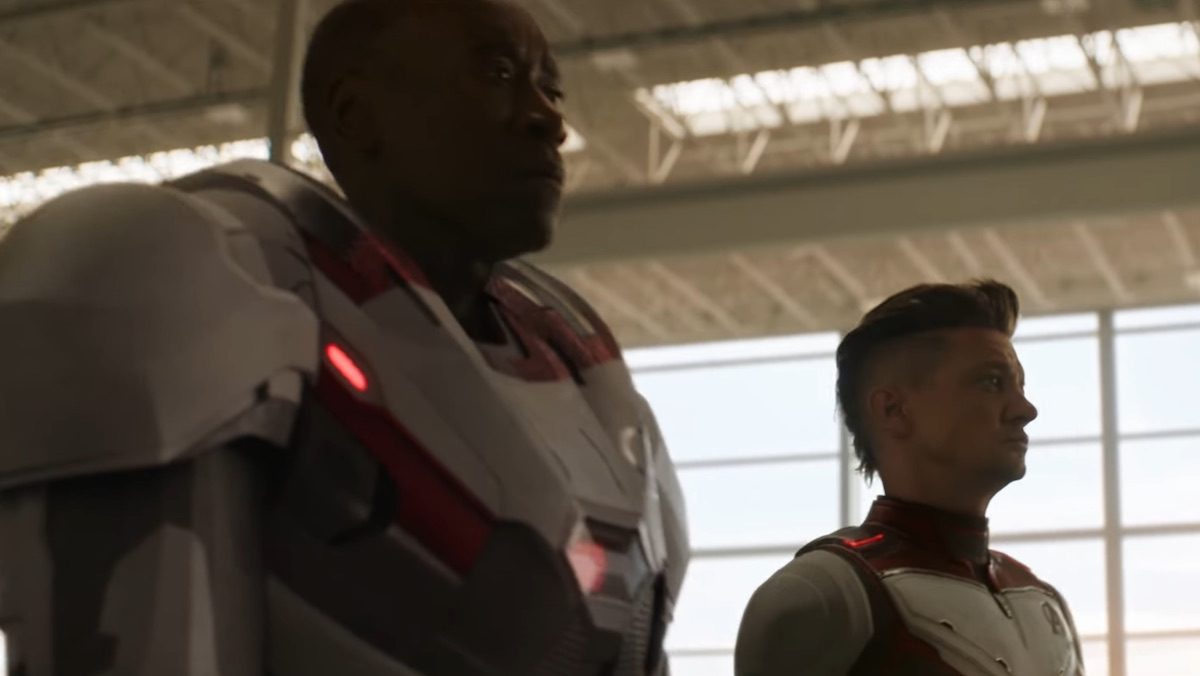 Wow, what a team. Could this possibly get any better? YUP, cause also with them is the Iron Man formerly lost in space, Tony Stark, seen with Natasha. 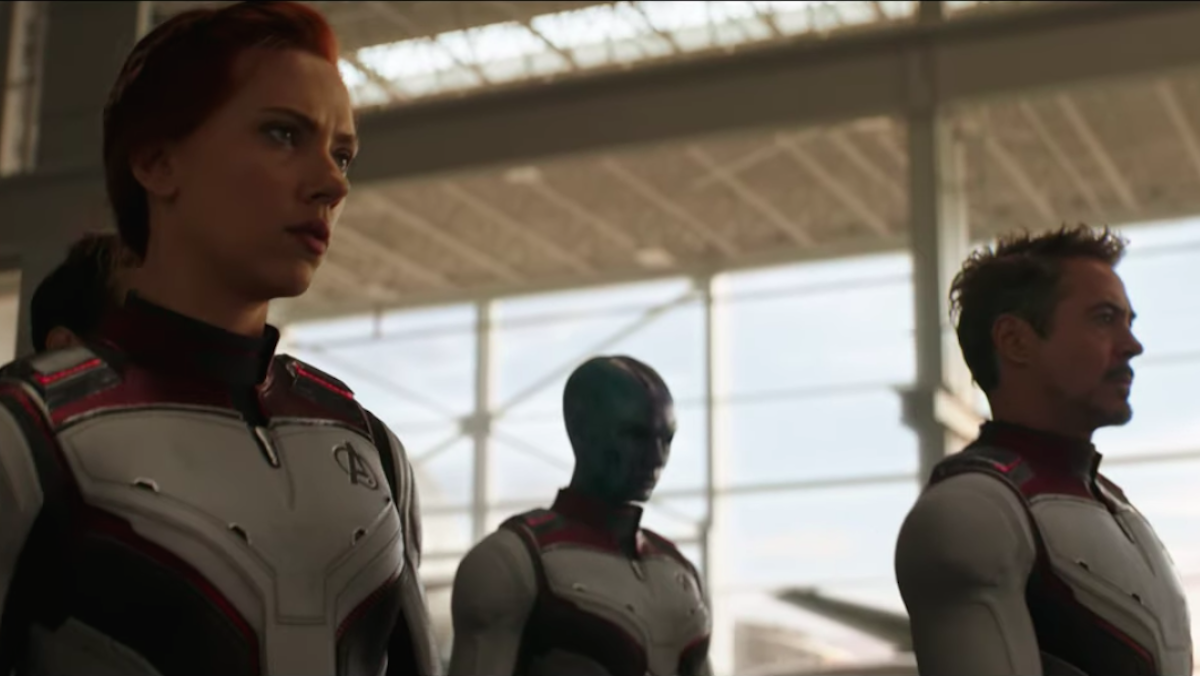 Remember when we wondered who was “missing” in the last trailer? Turns out the answer was all of them.

So why do all of these powerful heroes need special, matching get-ups? Likely because they are all traveling somewhere together, or rather some-when. These could be quantum suits, which they need to wear to safely travel into the Quantum Realm, where they will go back in time via a time vortex.

If that’s their plan (and it totally is) it would make every flashback in this trailer more than just an emotional tie-in. These scenes would be foreshadowing how the Avengers will save everyone Thanos dusted.

They’re going to have help, though, because while not seen in one of those suits, the end of this trailer plays off the mid-credits scene from Captain Marvel, when Carol Danvers answered Nick Fury’s page. Here we see her and Thor in an intense stare down as he silently calls for Stormbreaker with his hand. 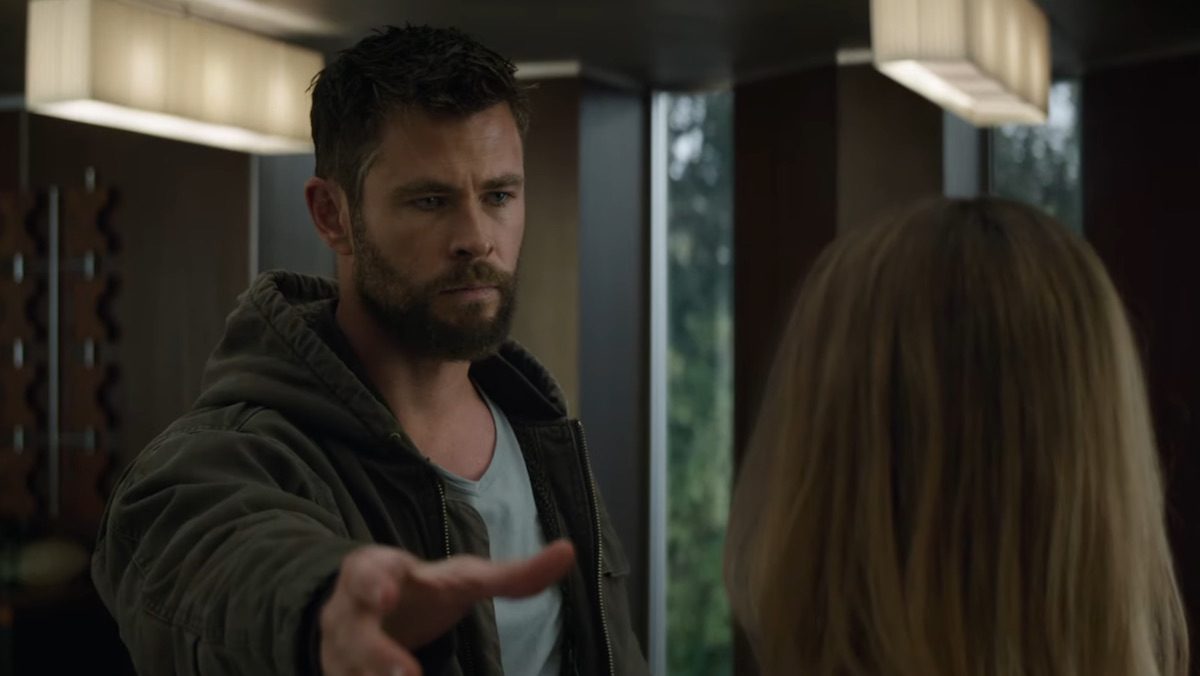 Captain Marvel doesn’t flinch as it whizzes by her head. Neither of them give an inch as they continue to eye each other, until Captain Marvel gives what is already an all-time top ten smirk. 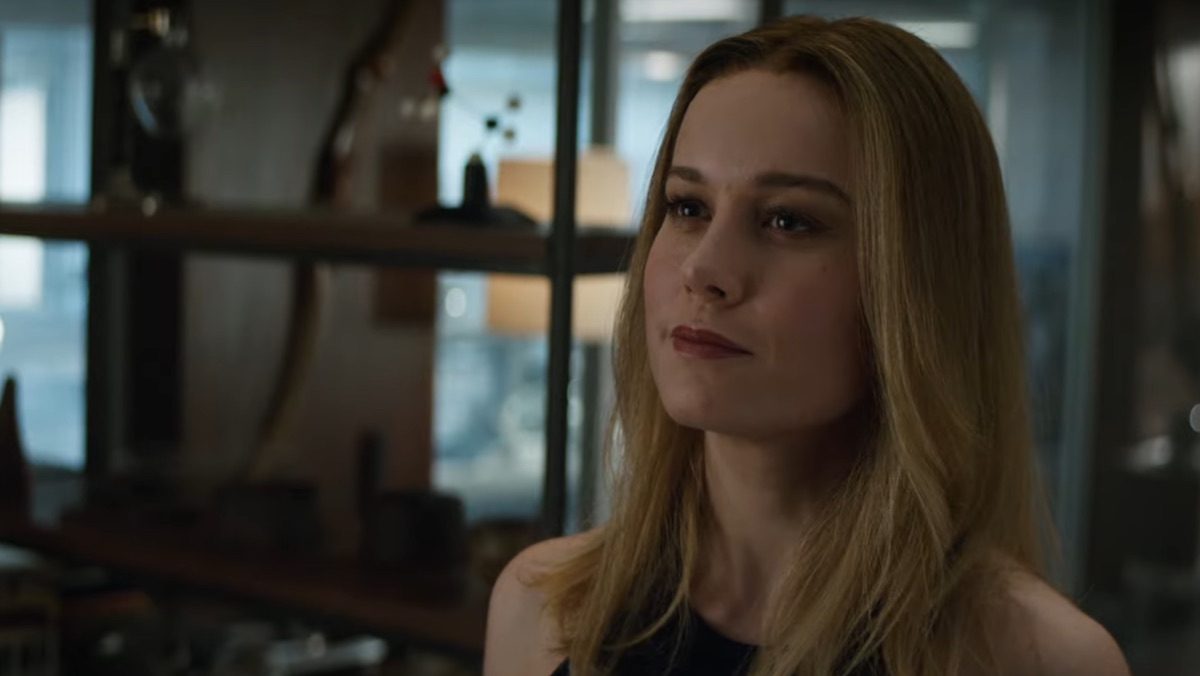 That makes Thor smile, as he tells Black Widow and War Machine, “I like this one.” 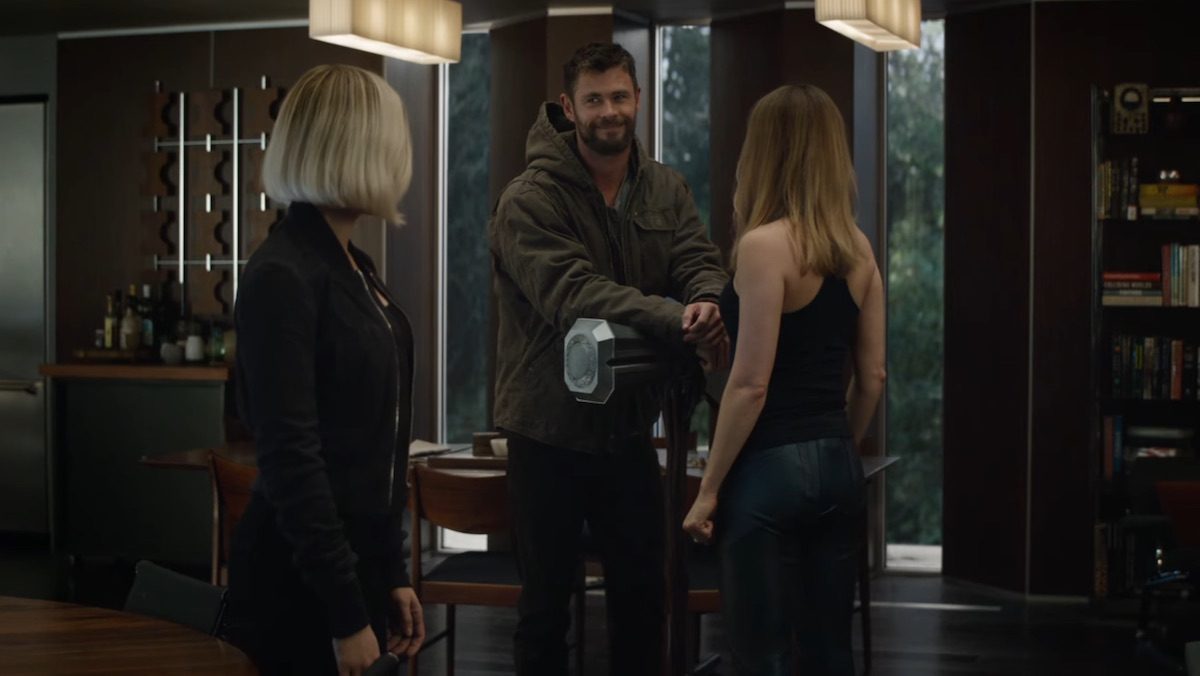 We’re obviously geeking out over this moment, but what might be just as telling is Natasha has her short, blonde Infinity War hair. This scene takes place shortly after Captain Marvel answers the page in her post-credits scene, and before most of the rest of the action in this trailer.

The past, the present, and the future, all of it is coming together in Endgame. Now we just have to wait to see how.