Why We're Very into Hawkeye in the AVENGERS: ENDGAME Trailer - Nerdist

Why We’re Very into Hawkeye in the AVENGERS: ENDGAME Trailer

by M. Arbeiter
Yeah, yeah—the latest Endgame trailer shows Tony Stark saved from the annals of space, Captain Marvel teaming up with the Avengers, and everybody suiting up for an ostensible journey into the past. Big whoop. Who can focus on any of that when you’ve got sight of Clint Barton rocking a serious mohawk?

Hawkeye is perhaps the most underserved character in the Marvel Cinematic Universe, and for understandable reason. Sharing company with heroes armed with superhuman strength, omni-powerful mecha suits, and mystical hammers granting wielders the power of flight (and, let’s not forget, thunder), Hawkeye and his above average marksmanship come off just a trifle underwhelming. But frankly, that’s what we love about the guy.

In fact, Hawkeye’s not-exactly-superhuman power coalesces perfectly with his story on the whole: he’s just… a regular guy.

He’s got a family. He’s got a dog. He’s got a life outside of fighting crime, and such is the life he chose if we’re to believe the expressed rationale for his absence in Avengers: Infinity War. And more than that, his problems are human. Whereas Tony Stark is compelled to assert himself the most impressive man alive, Steve Rogers is tortured by being ripped out of his own life story and thrust into a virtually alien world, Hawkeye’s a guy who’s biggest problems seem to be dealing with pain in the ass friends and coworkers.

Such is why we’re so intrigued by his turn in Avengers: Endgame, which will see him go full Ronin, and rock a serious mohawk. Frankly, most mohawks are pretty serious, but even still does this one establish itself as particularly humorous. This is a set of tresses that depresses. Really takes the folly out of the follicles. Um… hair sad. 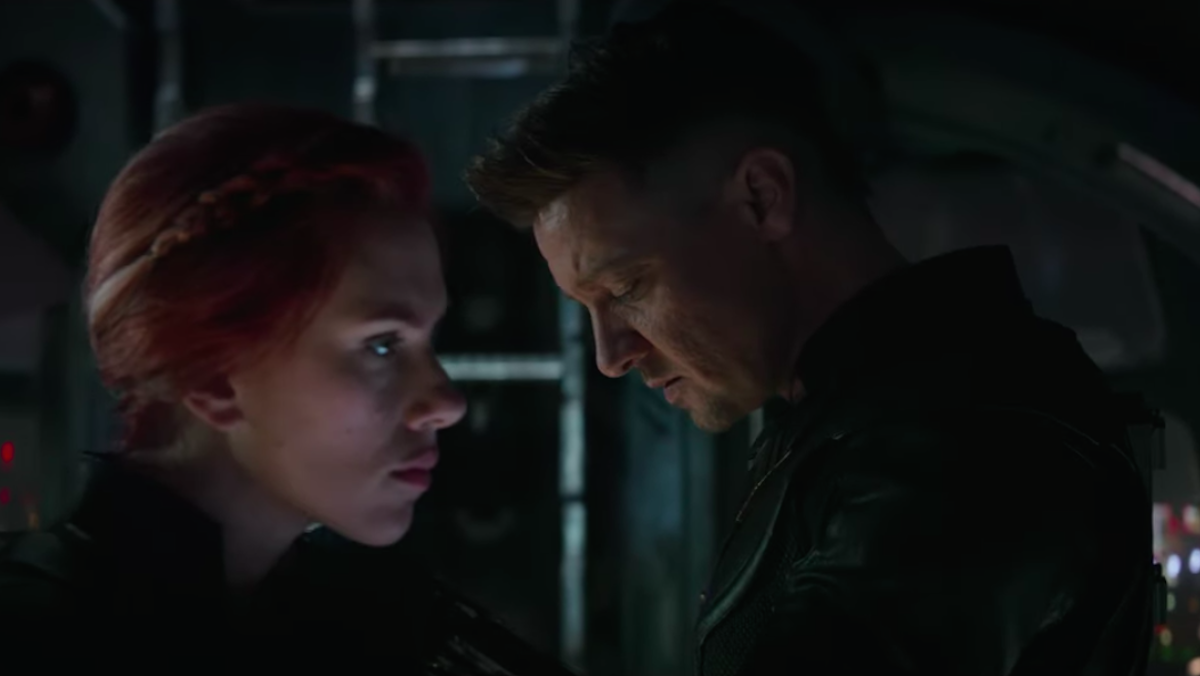 See, everything we know about the MCU’s favorite Robin Hood-wannabe suggests that this caliber of pompa-dour might only have come about by way of a truly intimate tragedy. Though the trailer shows Clint training what looks like his daughter (OR PERHAPS NOT) in the Barton trade of archery, we might also note that said scene shows our pal rocking a more interview-appropriate cut up top. These clues, combined with Peggy Carter-delivered voiceover about changing the past, suggests that we might be looking at a pre-Snap memory that foreshadows Hawkeye losing part or all of his family—the only kind of loss that could throw the traditionally-pretty-good-at-compartmentalizing Clint into a Travis Barker-style existential crisis.

And though we don’t exactly wish this fate on Hawkeye, it stands to reason that something so dire will finally bring his story to the forefront of Endgame, or at least closer than it’s ever been before. And especially after a Jeremy Renner-less Infinity War are we in the Clint camp hoping to see the MCU allow him his time in the spotlight.

(Plus, it’s not like Marvel’s not gonna bring his kids back. So, win-win!)