by Kyle Anderson
The ’70s were a fertile time for people to be scared of everything. Losing faith in pillars of hope as the ’60s went along left the people of the world unsure of much, and this is likely why so much great horror came out in the decade. One of the many movements–especially the early ’70s–was the Satanic Panic variety of horror, with the world still in fear of devil worshiping hippies following the Manson murders. It took a little time, but this kind of psychedelic, paranoid fright film came to Europe and hit its peak with the 1972 Italian film All the Colors of the Dark, now on Blu-ray from Severin Films.

All the Colors of the Dark is often lumped in with giallo, which it is to a degree. It’s a Gothic giallo if it’s a giallo at all, but it’s also much more of a pseudo-supernatural story that deals with everything from mental illness to the occult. It was directed by Sergio Martino, one of the pillars of the giallo in the early ’70s with his quintet of classics, of which All the Colors of the Dark, written by Martino’s frequent collaborator Ernesto Gastaldi, is number three. But again, it’s atypical. For an example of Martino and Gastaldi doing a much more straightforward, whodunit giallo, check out my essay on 1971’s The Case of the Scorpion’s Tail.

What makes All the Colors of the Dark so interesting is the strange, dreamlike tone and dour, gloomy atmosphere. It’s a movie that takes its lead heroine into the depths of hell, which may or may not exist purely in her mind; almost everyone she meets seems suspicious in some way. Though the movie doesn’t rack up the body count with elaborate murder set pieces the way Scorpion’s Tail or Dario Argento’s seminal The Bird with the Crystal Plumage did, it nevertheless builds tension and dread from the opening dream sequence to the final, abrupt freeze frame.We follow Jane, a troubled young woman suffering from terrible nightmares caused by both childhood trauma and a recent car accident that caused her to miscarry. She’s in a bad way. Jane is played by Edwige Fenech, a staple of the giallo, who played the similarly fragile lead of Martino’s first giallo, The Strange Vice of Mrs. Wardh. Fenech plays abject fear better than most of her contemporaries and always portrays a sense of danger of her own, even when she’s playing a perpetual victim. 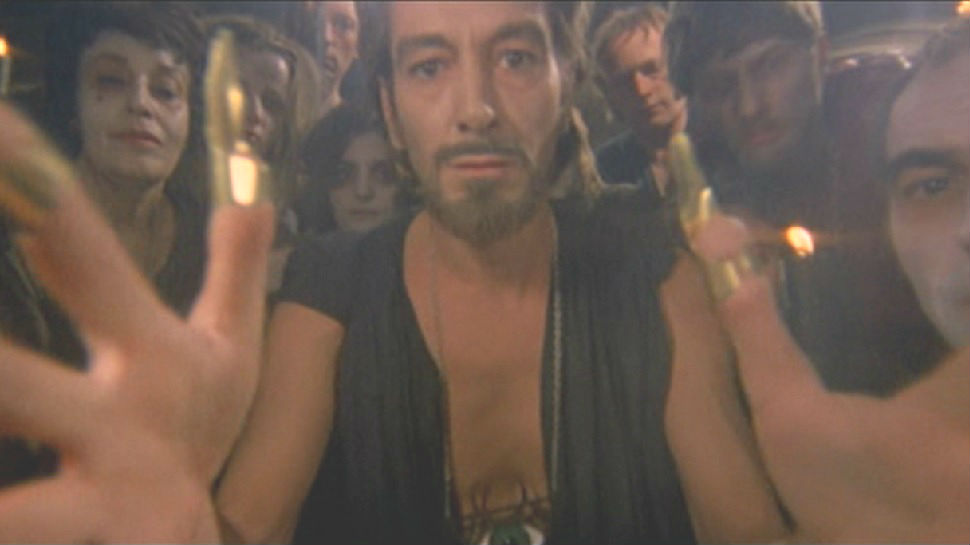 Jane’s lover Richard (George Hilton, another Martino staple) is a pharmacy rep and tries to get Jane to take pills to help her sleep, but she doesn’t want to. Her buttoned-up older sister Barbara (Susan Scott) works for psychiatrist Dr. Burton (George Rigaud) who tries to help her through therapy, which Richard thinks is nonsense. Jane can’t help having these nightmares of the night her mother was murdered with a stiletto blade and the terrifying man with piercing blue eyes (Ivan Rassimov) who carried it out. She even sees the man when she’s awake, and so when her new friend Mary (Marina Malfatti) suggests she visit the same black magic group that helped her through her own tough times, Jane cautiously agrees.

And it’s here the movie takes a turn to the trippy. Jane goes to the massive manor house at Mary’s urging and gives herself over to the ritual, which is shot for maximum weirdness, coupled with a particularly driving rock-chant cue of Bruno Nicolai’s score. The head of the black mass (Julian Ugarte) slaughters a dog in front of her and forces her to drink its blood. It’s implied she’s also been slipped hallucinogens which thereafter make her question her own senses. And while at first it seems the ritual was a success and she’s happy again, Jane begins to see the terrifying man again, who pursues her and torments her incessantly while no one else seems to see him. 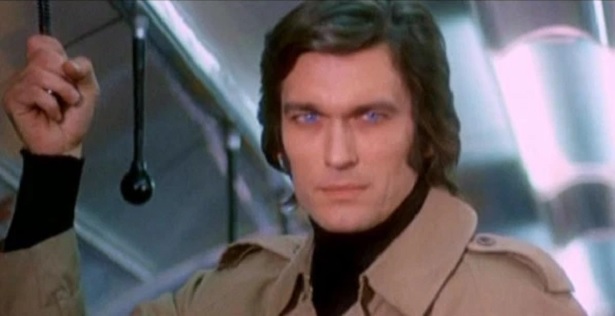 As the movie continues, it becomes clear someone is doing something, and the cult demands Jane return to them, but how can she get away when the man is around every corner? It’s here that All the Colors of the Dark differs from the usual giallo. In most standard gialli, the killing is done by a typical black-gloved, black-coated, black-hatted figure who we later find out is one of our roster of possible suspects; here we know the threat from the start, we see his face (time and time again), we’re just not certain he’s really there, or doing anything. Nightmares factor greatly into the narrative, and dream logic dictates it all might be a dream. When someone dies, there’s suddenly no evidence they ever existed. It’s enough to drive sane people crazy, so imagine someone already on the brink living through it.

The cinematography by Giancarlo Ferrando is beautiful in its bleakness. Gone are the sunny climes of Greece from Scorpion’s Tail and instead we have the overcast and ethereal London skyline and the suitably Gothic English countryside. Much of the film is shot in soft focus, which continues the dreamlike aesthetic, and several times fish eye lenses are used to emphasize both Jane’s waning sanity and the fracturing of reality itself. Martino doesn’t get enough credit for being a real master of suspense, and several sequences here–including a couple utilizing an apartment building’s tall, winding staircase–are among his best.

For most of the movie, we’re exploring Jane’s psyche and her general lack of certainty in her life; this is where the film’s plot really flourishes. We buy that she’d maybe go seek mystical help after hearing about it from a woman who seems like she’s got it all figured out. However, toward the end of the movie, as the plot needs to make some kind of sense, Gastaldi introduces some awkward mystery elements, like an inheritance scheme and ample double-crossing, but it doesn’t detract from the overall sense of the movie showing us a woman’s brain melting down through fear and uncertainty.

All the Colors of the Dark is a must-see for fans of European horror and gialli specifically. Every member of the cast is a staple of the genre playing the type of character they always play. Fenech was never more watchable and Rassimov’s terrifying visage is sure to give you sleepless nights. It’s newly remastered by Severin Films and the gorgeous Blu-ray features new interviews with Martino, Gastaldi, and Hilton, and a terrific audio commentary by one of my favorite giallo critics, Kat Ellinger. 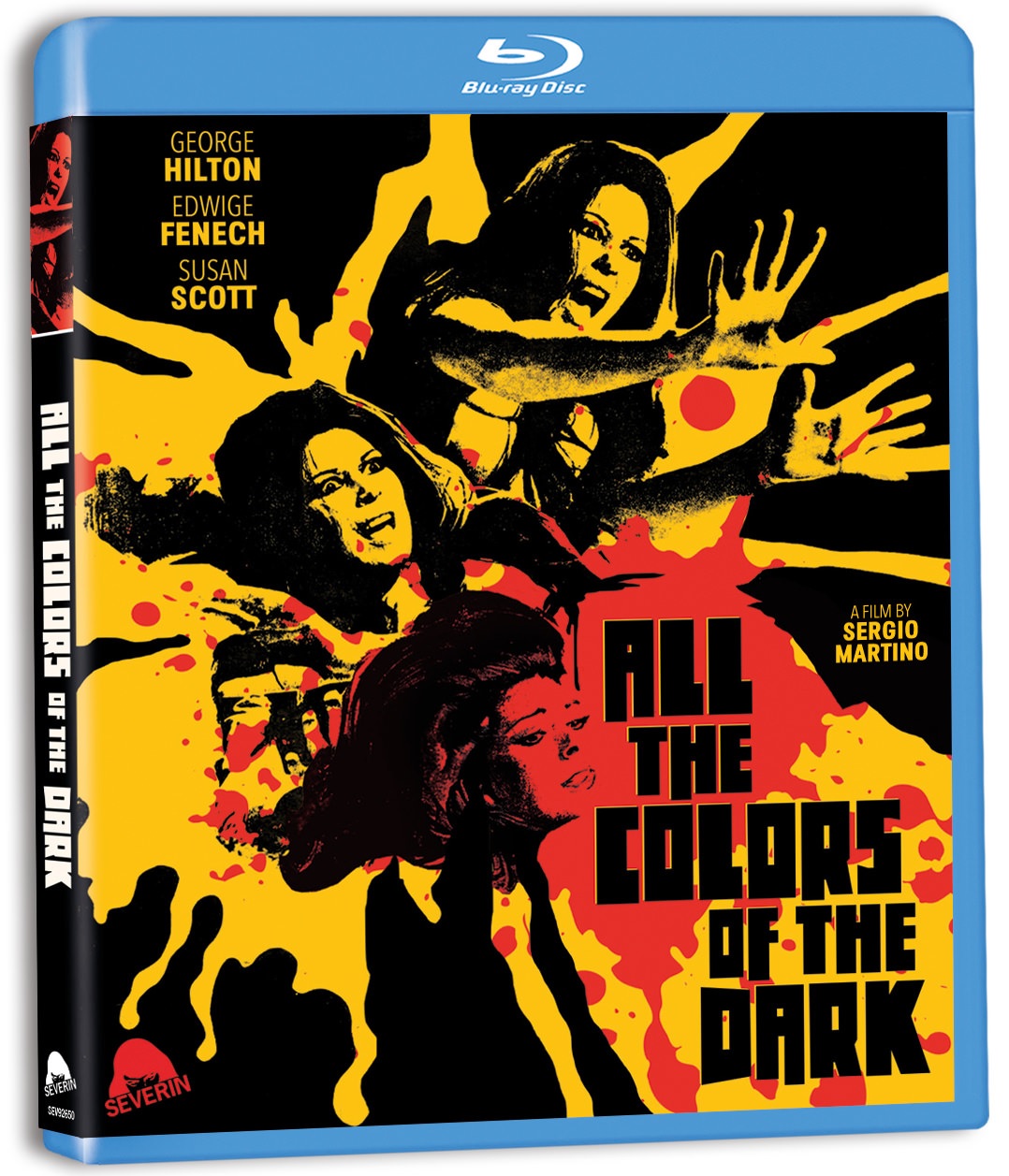 Also included is a CD of the film’s amazing and upsetting score, which is the perfect soundtrack for gloomy winter months. The music fits the film’s aesthetic so thoroughly that it’ll immediately evoke the images you’ve just witnessed. All the Colors of the Dark is a trip to hell well worth taking.